“If everybody always lies to you, the consequence is not that you believe the lies, but rather that nobody believes anything any longer.”  —Hannah Arendt

With people spending hours on Instagram to tweak the lighting of a selfie or choosing only to post three vacation pictures from a camera roll of hundreds, it seems that everyone has become their own public relations officer seeking to publicize the very best version of themselves. Yet, despite all this effort to cast the most polished version of our lives into the newsfeeds of friends, family and coworkers, we can be painfully unaware of how the world actually perceives us.

That’s often the case not just for ourselves as individuals, but also the groups that we affiliate with in our community. Those associations can have a distorting effect on not just how we view our own lives, but also how we perceive groups with different beliefs than our own. That is no more acute than in the two most influential institutions in American life: politics and religion. The heated rhetoric that is bursting at the seams of cable news and social media seems to reinforce the goodness of one point of view, while assuming the worst about anyone who holds a different opinion.

Ground zero for this phenomenon is the modern perception of American evangelicals. The term has become a lightning rod in American society. While Republicans and conservative Christians see a group that does its best to live out the gospel message and love those around them, Democrats and people from other faith groups often characterize evangelicals as narrow-minded bigots attempting to stifle progress in the U.S. But what does the average American think of evangelicals?

Barna put a survey in the field days after the 2018 midterm elections to assess how evangelicals are viewed by the American public at large. As a political scientist, I am becoming increasingly convinced that Americans view evangelicals as a distinctly political phenomenon and, as such, understanding how political partisanship shapes views of this group seems especially helpful.

While analyzing the data, I separated the sample into self-identified political affiliation—Republicans, Democrats and Independents—then calculated to find what percentage of each group views evangelicals in a positive or negative light. My initial hunch was quickly confirmed after some very simple analysis. 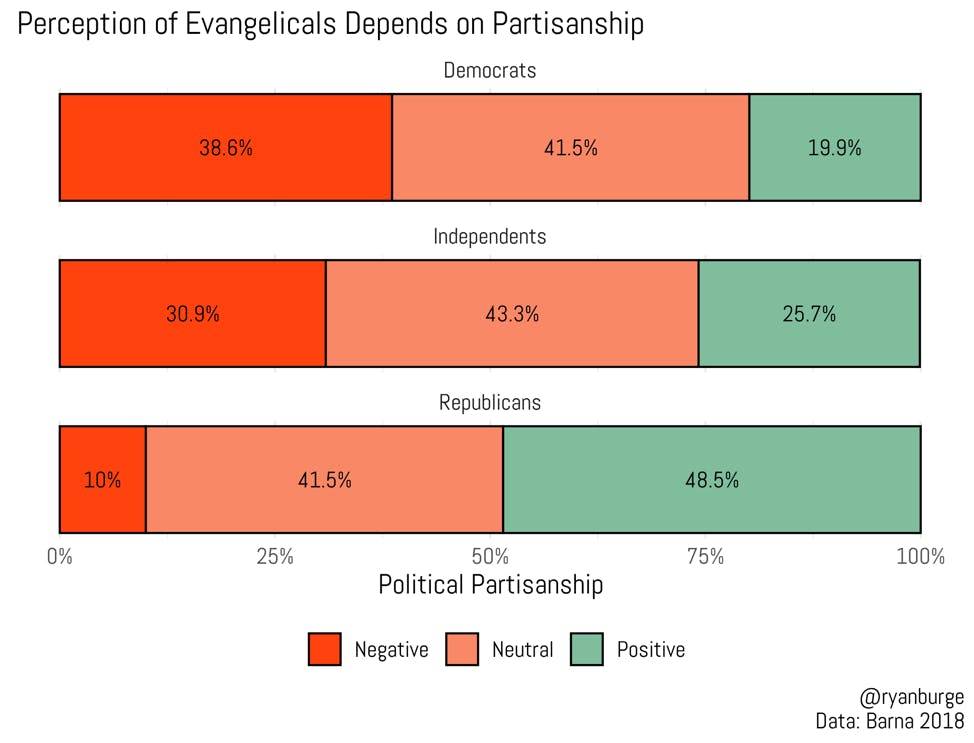 Only one in 10 Republicans (of any religious affiliation) sees evangelicals in a negative light, while nearly half say that they have a positive impression. Compare that to the results from Democrats—just one in five has a positive outlook on evangelicals, while four in 10 view them negatively. It’s also noteworthy that while political independents don’t perceive evangelicals like political partisans do, it’s clear that their opinions are closer to Democrats than to Republicans. The impression here is that the Republican viewpoint is unique among the American population.

In addition, the survey included 20 different terms that could possibly describe evangelicals. Using the partisan identification previously described, I calculated the share of each partisan group that checked the box beside each of the descriptors. The results provide some context for why Democrats view evangelicals more negatively, while Republicans have a warmer perception. 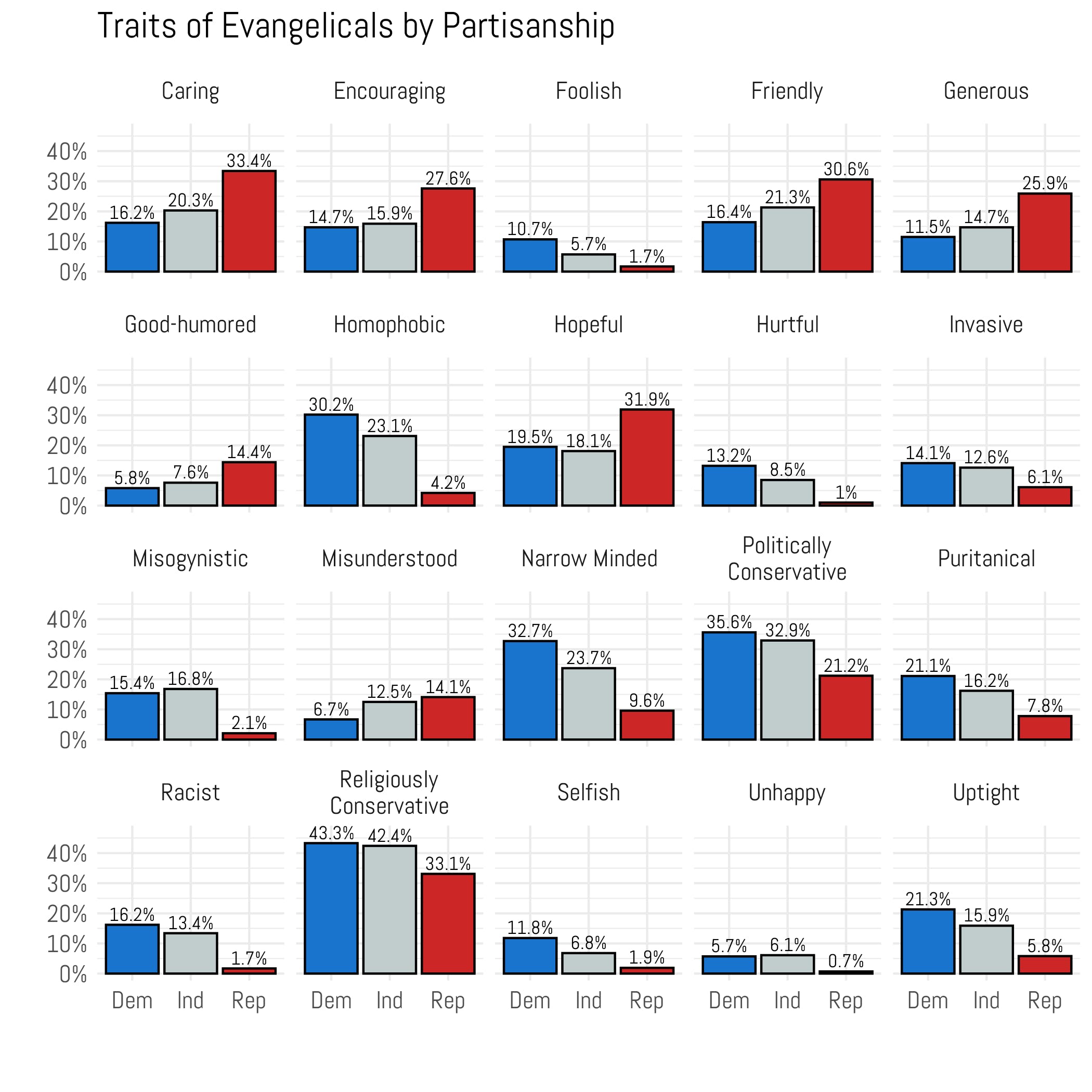 The one that is the most puzzling to me is that while Democrats believe that evangelicals are both religiously and politically conservative, Republicans are much less likely to believe that evangelicals are politically conservative. I think this illustrates a central fact in American politics: Each side perceives their political viewpoints as pragmatic and moderate, while the other political party’s platform is viewed as extreme. In essence, we’ve lost a sense of what the “middle” really means.

It would be easy for evangelicals to look over these results and immediately become defensive. Retorts like, “that’s just what the media / their friends / the world tells them to believe,” are often quick to roll off the tongue when confronted with data like this. However, I would recommend that evangelicals lay down their defenses and try, as best as they can, to put themselves in the shoes of those who think about the world differently than they do. As Hannah Arendt alludes, it’s easy to believe that the other side is being lied to, but it’s much more difficult to believe that we are lying to ourselves.

Evangelicals do have a perception problem. It’s fair to say that some of that is media-driven, but it would also be appropriate to say that some of it is self-inflicted. Often, the focus remains on the heated rhetoric and divisive language used by some people of faith to articulate their beliefs, when it should be on the simple, even unnoticed acts of kindness that evangelicals engage in daily.

There’s no simple way to fix this problem of perception. Instead, I am reminded of Paul’s admonition to the church in Galatia: “Let us not become weary in doing good, for at the proper time we will reap a harvest if we do not give up.” The only way to change the narrative around evangelicals is for them to not grow tired of doing what is good.

Dr. Ryan Burge is an assistant professor of political science at Eastern Illinois University. He has published over a dozen articles in peer-reviewed academic journals as well co-founded the website Religion in Public (https://religioninpublic.blog), which is a platform for social scientists to make their work accessible to a wider audience. He is the pastor of First Baptist Church of Mt. Vernon, Illinois. A Q&A on Counseling: Jamie Tworkowski

What Do Americans Believe About Abortion?

In Barna's most recent poll, the majority of American adults say they believe abortion should be legal.