Millions of Americans face mental illness each year, according to NAMI. Yet the stigma surrounding mental health is acutely felt—even in the Church, which has at times struggled in its messaging on the issue. This is despite the fact that, according to new Barna data, Americans by far have positive experiences with counseling—a practice that helps them heal from trauma, facilitate mental health, build strong relationships and change destructive patterns of thinking. In a new study, Barna wanted to know just how many American adults are engaging in counseling and how they feel about the practice. You can also read more about this topic in our Q&A with Jamie Tworkowski, founder of To Write Love on Her Arms. Both are part of a larger study on counseling featured in the new book Barna Trends 2018.

Familiarity with counseling (or lack thereof) seems to run in one’s family. The responses are very similar when Barna asked if anyone in their immediate family has seen a counselor: “yes, currently” (17%), “yes, but not anymore” (26%), “not currently, but they would be open to it” (29%) or “no, they never would” (28%). In addition, the answers adults gave about themselves were mostly likely to be the answers they gave for their family members. For instance, 65 percent of those who say they currently see a counselor claim the same for their family member. This is also true of those who would never see a counselor, 73 percent of whom say the same about their family member.

Again, younger adults are more likely to say someone in their immediate family goes to counseling, particularly Gen X. While 17 percent of adults say a family member is currently seeing a counselor, one in five Millennials (21%) and one in four Gen X (24%) say the same. These numbers far exceed reports from Boomers (11%) and Elders (5%). This difference could be connected to younger adults having a greater willingness to recommend counseling to their friends and family members. While 42 percent of all adults say they have made such a recommendation, close to half of Millennials (49%) and Gen X (51%) have done so.

Affordability and Expertise Are Key in Choosing Counselors
Among those who have seen a counselor, four in 10 (39%) were referred by a doctor, and one-fifth (19%) was recommended by a friend or family member. When asked which two attributes are most important to them in choosing a counselor, the plurality selects affordability (46%) and specialization or expertise (42%). Predictably, the importance of affordability changes by income level. Those earning $100,000 or more each year strongly favor specialization or expertise (48%) more than any other factor, including affordability (22%). For those whose annual salary is $50,000–$90,000 (47%) or less than $50,000 (52%), affordability is the number one factor. 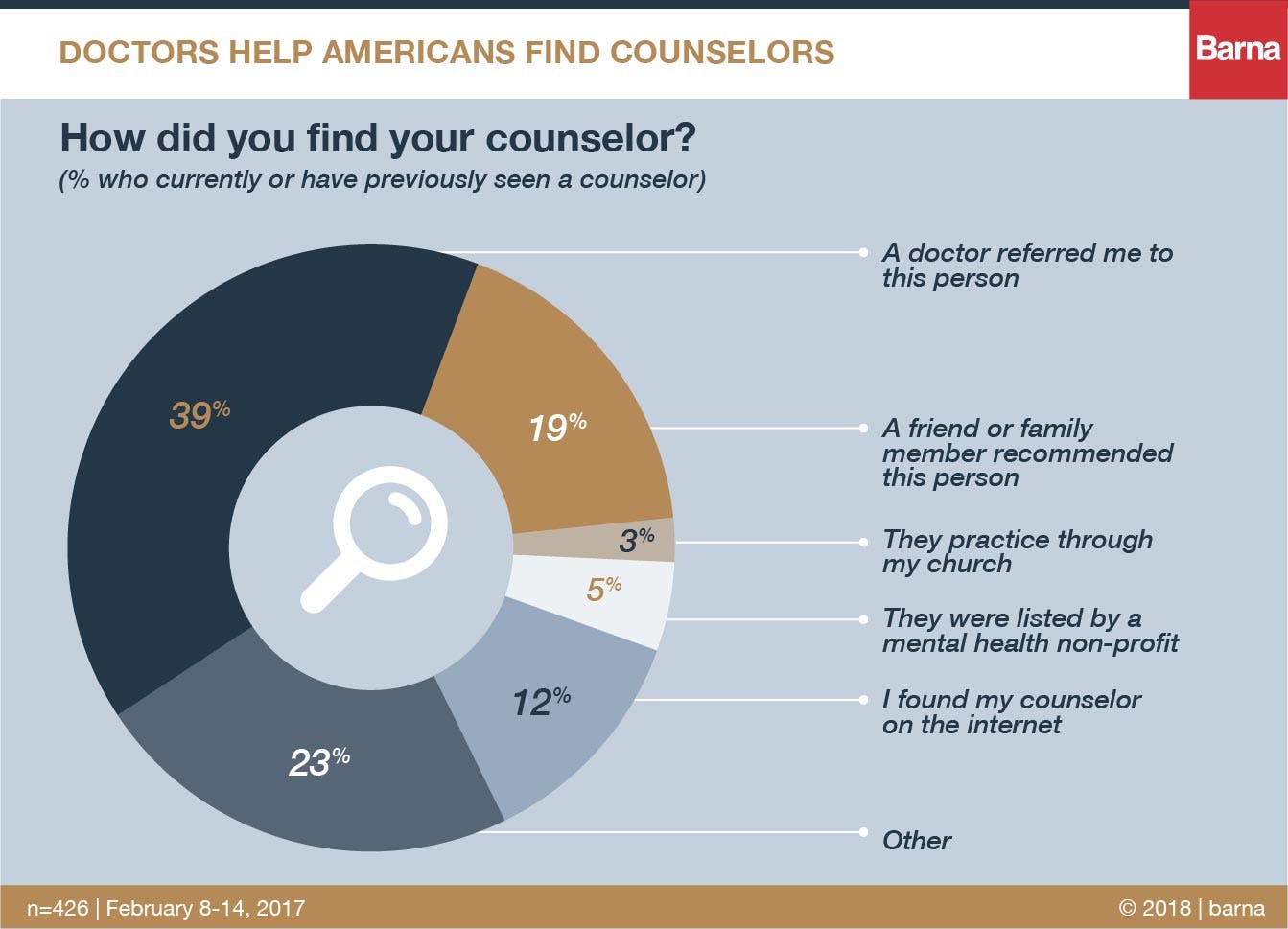 While only 8 percent of U.S. adults say a similar religious background is one of the most important factors, this is much more essential to some. For example, among conservatives, one out of five (20%) indicates a similar religious background matters greatly to them, far more than the 3 percent of liberals who say the same. Among evangelicals, almost half (47%) also list this factor among their top two, a striking comparison to the few of no faith (1%) who look for a therapist with a similar faith experience. 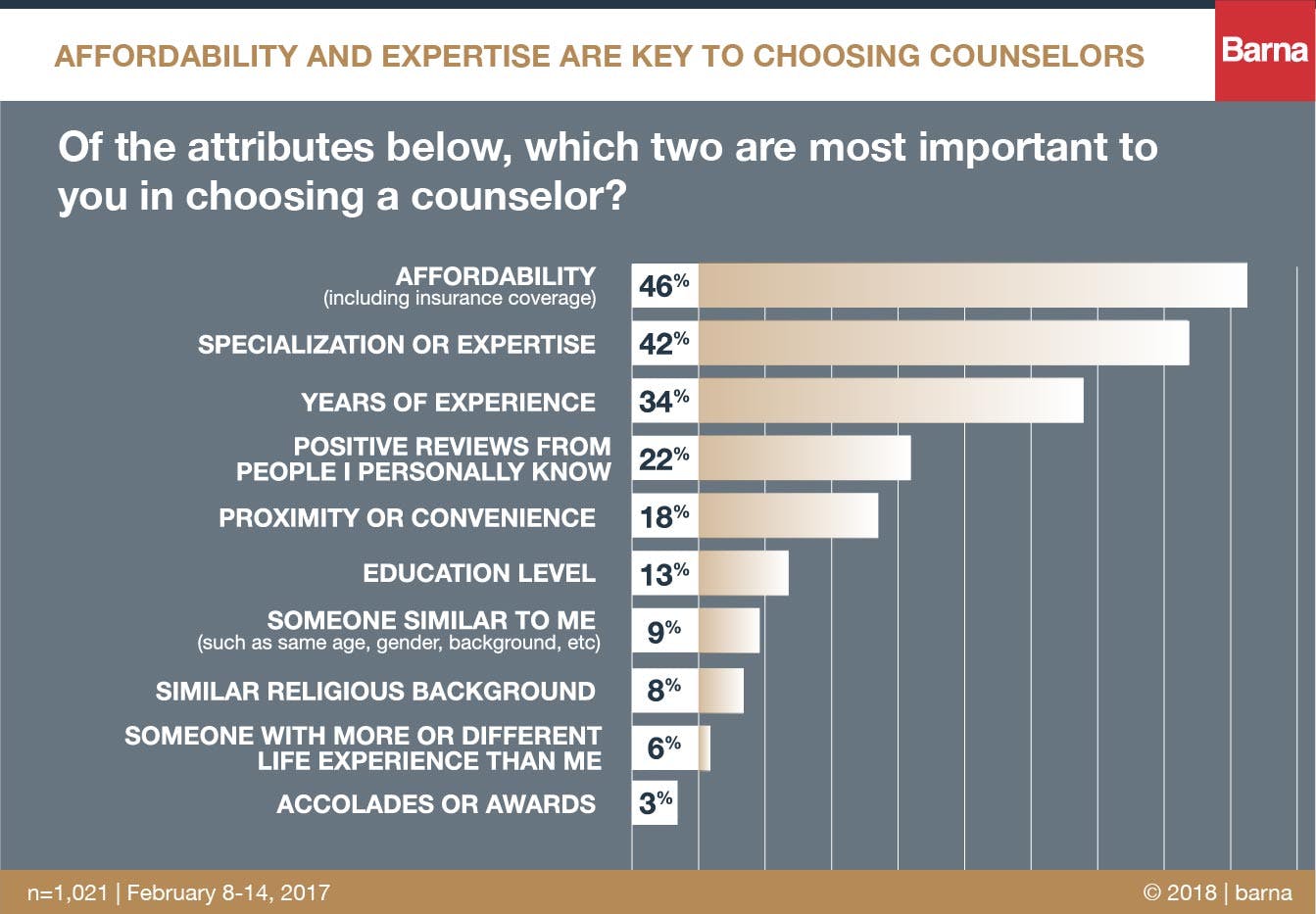 Barna Trends 2018: Your guide to the latest cultural, religious and political trends

Doctor’s Orders, Trauma Prompt Counseling
Among adults who have seen a counselor, three in 10 (30%) say a doctor’s recommendation prompted them to begin counseling. Another 28 percent say it was a traumatic experience, such as the loss of a loved one, loss of a job, disease, accident or divorce. Men are more likely to report the former (36%, compared to 24% of women), while women are more motivated by the latter (33%, compared to 21% of men). Another one in four adults (25%) says they went to receive treatment for a mental illness.

Almost one in 10 married people (9%) says they attended required premarital counseling—half the percentage (21%) who have sought therapy when their marriage faced a trial.

Millennials are the generation most likely to begin counseling as treatment for mental illness, with more than one-third (34%) reporting this as the impetus for their therapy. By comparison, 23 percent of Gen X and 21 percent of Boomers cite this reason. These statistics may point to decreasing stigma around mental illness among younger generations, who have grown up with more open or public conversations about mental health.

Additionally, one in three non-Christians (33%) acknowledges seeking treatment for mental illness, more than twice the percentage of practicing Christians (15%) who have gone to counseling for this purpose. While there’s a chance some of the faithful are simply confident in their mental health—after all, science confirms that religious belief and a loving, stable community can be healing and have psychological benefits—this may also reflect the strength of stigma within Christian circles, as many churches have been slower to accept mental illness as a legitimate struggle requiring professional help. 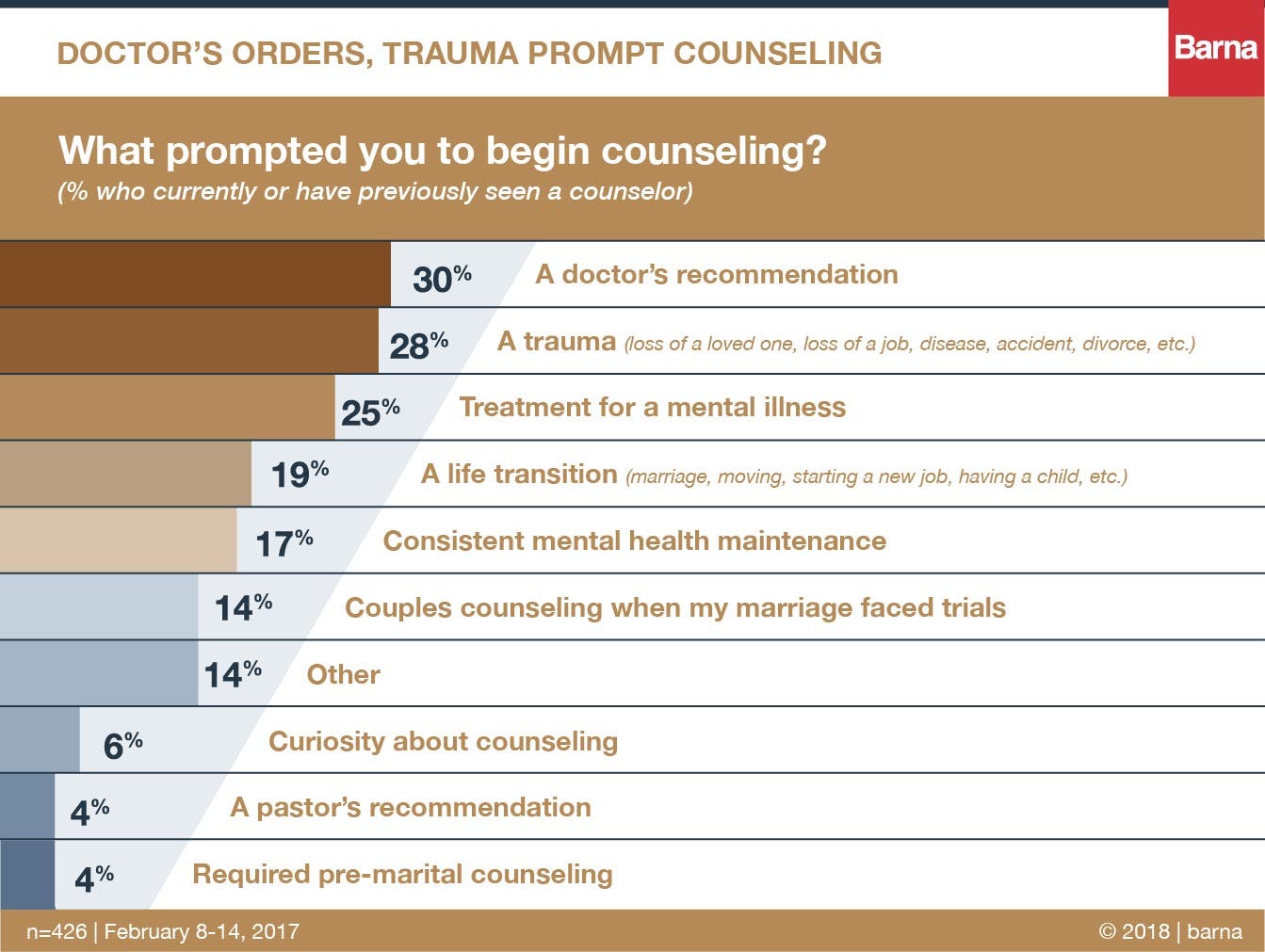 Americans Feel Positive About Counseling
Though their reasons for visiting a counselor may vary, Americans consistently indicate the experience was very positive (47%). Another 29 percent say it was somewhat positive, with a small minority calling it somewhat (5%) or very negative (1%). The remaining 17 percent rate their experience as neutral. For the Christians who do pursue professional counseling, it’s highly rewarding; more than half (54%) call it very positive (vs. 36% of non-Christians). Practicing Protestants (69%) and Catholics (77%) are particularly upbeat about their time in therapy. Perhaps this high level of satisfaction explains why practicing Christians (52%) are more likely than non-Christians (43%) to recommend counseling to friends and family. 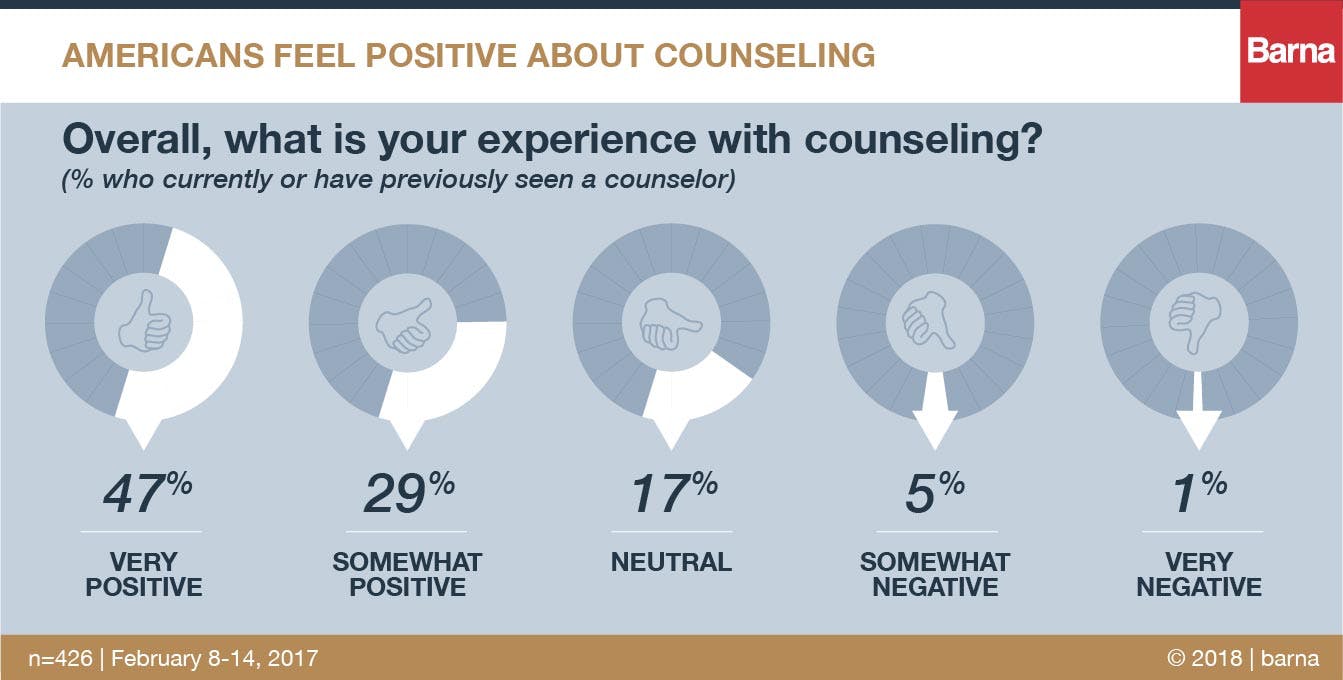 What the Research Means
“Barna has found that ideas about mental health are often nurtured by relationships,” says Alyce Youngblood, Managing Editor at Barna. “Most of those who are seeing or have seen a therapist have family members who have done the same. A majority of those who would at least consider counseling feels their family is also open to it (and vice versa—almost three-quarters of those who would never be open to counseling say their relatives share this sentiment). People are more likely to recommend therapy to friends and family if they’ve engaged in it themselves. Further, those who report having a good experience with counseling point back to a community that actively participates in it.

“Close relationships can even be persuasive in helping someone choose their counselor,” continues Youngblood. “Roughly one in five says it’s important to them that a counselor has positive reviews from someone they personally know, and a similar proportion found theirs through a friend or family member’s recommendation. It’s not newsworthy that people tend to embrace ideas or habits that are modeled for them. But growth is a shared endeavor, profoundly dependent on the right mix of external influence and internal response.

“If your personal circle helps form your perceptions of mental health,” says Youngblood, “it’s worth measuring its diameter. Reframing ideas about mental illness, and even taking part in counseling, may require an ‘outside-the-comfort-zone’ vulnerability. What do we stand to miss when these conversations occur in an echo chamber? How many people who desperately needed counseling haven’t sought it out because no one in their circle recommended it? The well-being of any individual or community is an exchange, a holy balance of listening up and speaking out.”

About the Research
Interviews with U.S. adults included 1,021 web-based surveys conducted among a representative sample of adults over the age of 18 in each of the 50 United States. The survey was conducted from February 8, 2017 to February 14, 2017. The sampling error for this study is plus or minus 3 percentage points, at the 95% confidence level. Minimal statistical weighting was used to calibrate the sample to known population percentages in relation to demographic variables.

Photo by Ben Garratt on Unsplash

The Enduring Influence of Billy Graham

Evangelist Billy Graham has died at the age of 99 at his home in North Carolina. Widely considered the most significant religious figure of the twentieth century, it’s estimated that Graham preached the gospel—in person—to over 200 million people (more than any preacher in history) in 185 countries and to millions more via television and other media. Over the years, Barna’s polls have included questions about the influence of Billy Graham. In memory of this singular figure in American and Christian life, we’re revisiting some of these statistics, which serve as a testament to the enormous impact of a well-lived life.