Ireland is globally recognized for its long history of Christianity, but religious identity in the republic is rapidly changing as a global shift toward secularism gradually and inevitably makes an imprint on a population where Christianity has long been the dominant religion. In the midst of these changes is a young generation that is anxious and searching. A new Barna report conducted in partnership with Christ in Youth examines young people in the Republic of Ireland, with a specific emphasis on their faith, worries and perceptions of Christianity. Below are 10 of the key findings from the report.

1. A Majority of Irish Youth Is Christian …
Ireland’s history is steeped in Christianity, and most Irish youth (70%) consequently think of themselves as Christians. Of those, 86 percent say they are Catholics, making Catholicism the majority religious identity in the Republic of Ireland (60%). In keeping with the high percentage of Irish youth who regard themselves as Christians, nearly all have experience with church services: 89 percent have attended a church service at some point, and one-third of Christian youth (33%) attended church in the last week, as did 5 percent of non-Christian youth. Three-quarters of non-Christians (75%) have attended a regular church service, but more than half (53%) say it was more than six months ago. 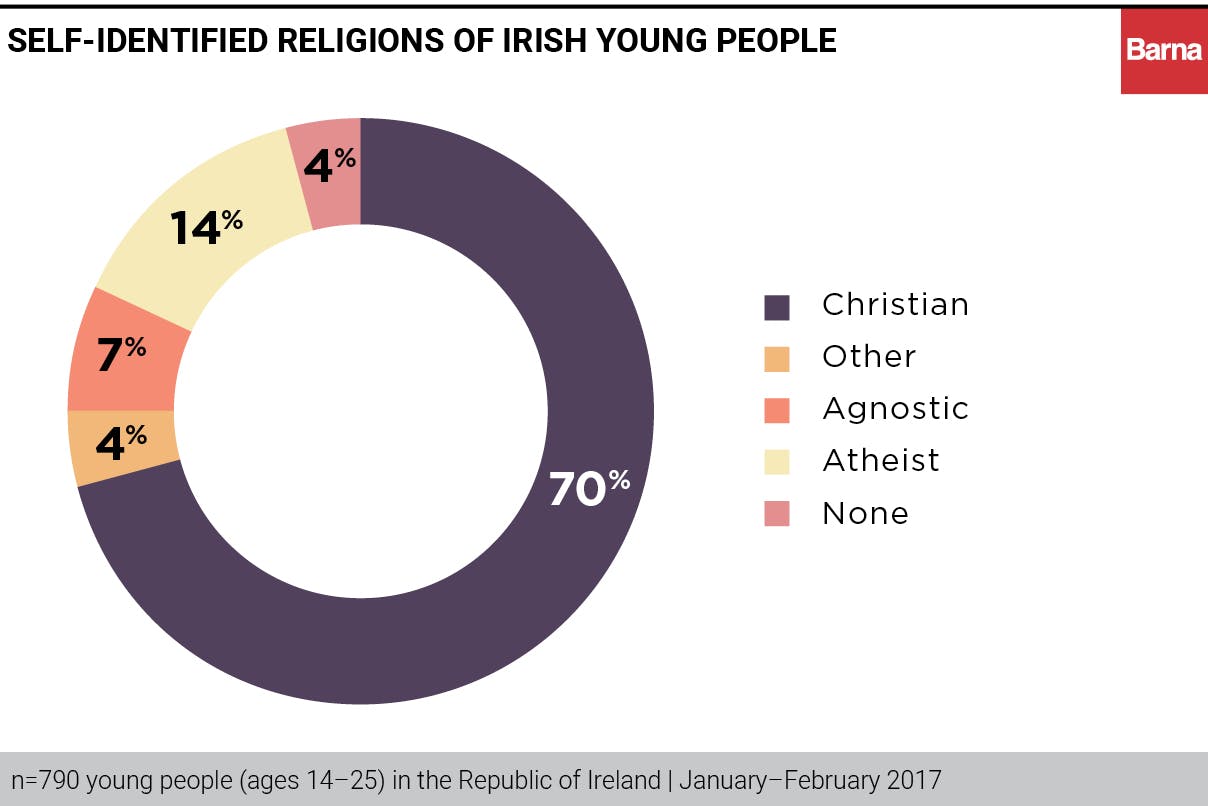 2. … But in Name Only
Although it may seem that the pervasiveness of Christian identity lays a foundation for faithfulness, young people seem to be drifting away from an active, embodied religion. For instance, a significant percentage of young people do not affiliate with a religion, a group commonly referred to as the “nones.” A total of one-quarter (25%) says they are non-religious. But even if Irish youth don’t abandon religious labels, they discard its key tenets. A majority (63%) of those in Barna’s survey qualifies as nominal Christians—essentially, they are Christians in name only. Overall, less than half (47%) feel their religious faith is very important, and one in five (19%) affirms the idea of salvation through grace. 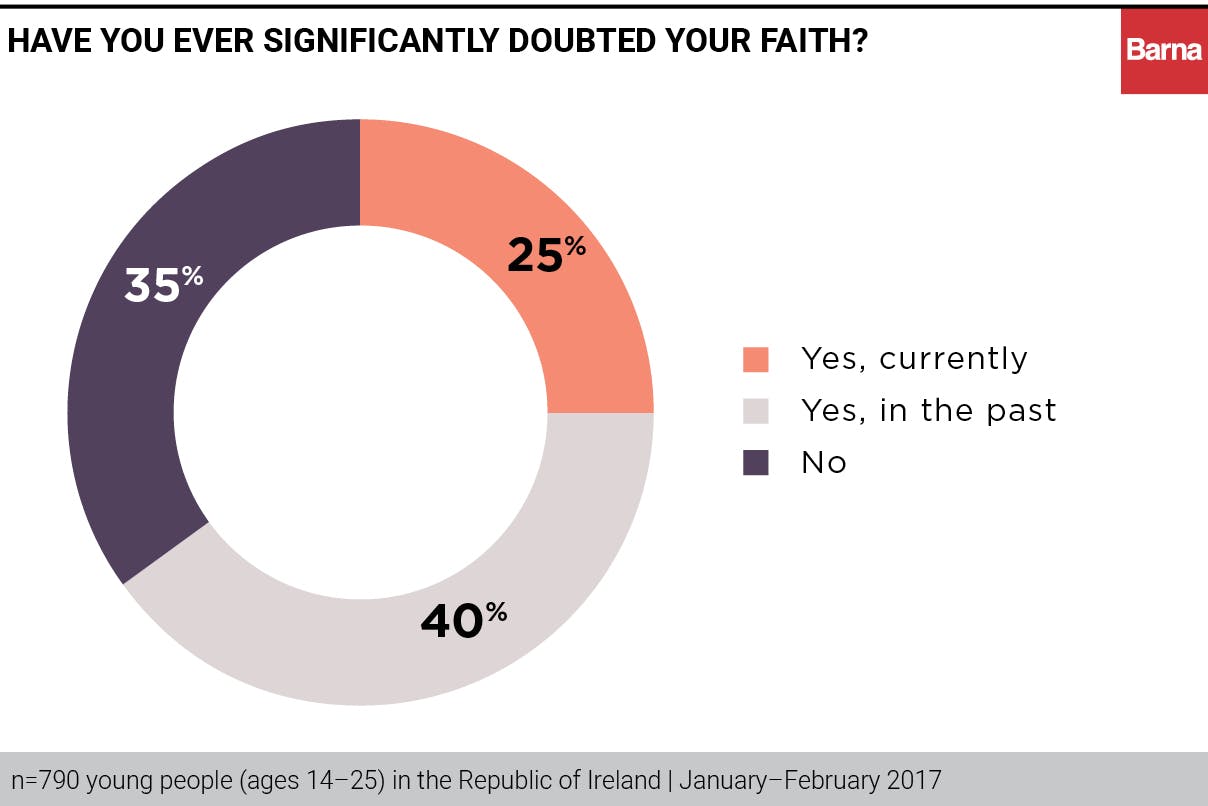 One in four Irish youth says they are currently going through a crisis of faith. Click To Tweet

4. Few Irish Youth Feel Confident About Their Knowledge of Theology
The overall religious apathy of most Irish youth who identify as Christian becomes clear when they’re asked about their commitments to core teachings of the faith, such as those presented in the Apostles’ Creed. Only about half of Christian youth in Ireland agree with any of the ideas in the Apostle’s Creed. Even self-identified Christians have a broad range of orthodox and unorthodox ideas about God, with confusion over equality within the Trinity, God’s power and the doctrine of hell. For example, four in 10 (41%) believe that Jesus is equal to God the Father. Among practicing Christians, the proportion is higher (50%), but still relatively small. 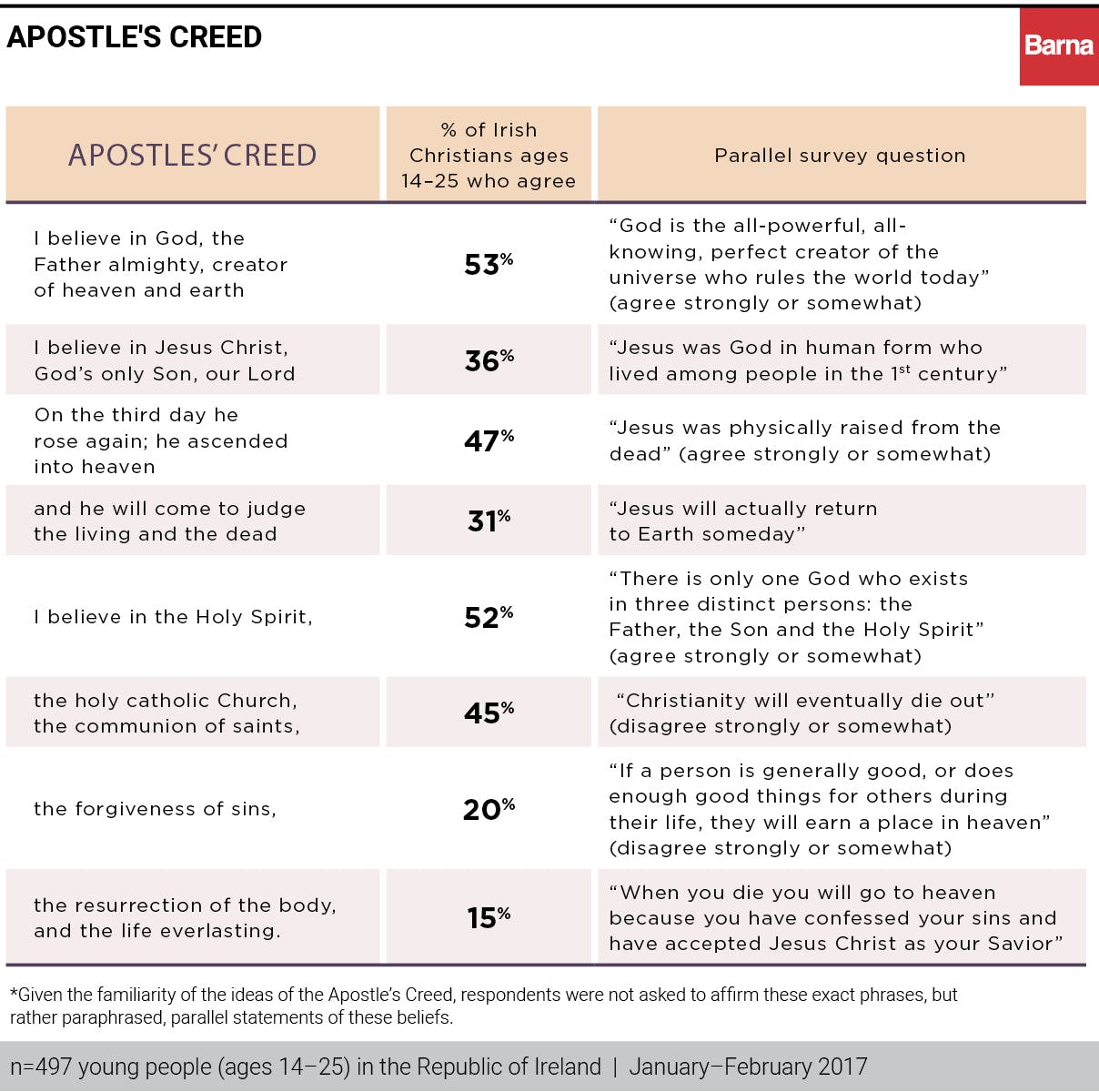 5. Young People Feel Increasing Conflict Between Progressive Values and Christian Morality
Barna found that the subject of sexuality weighs heavily on the minds of Irish youth and proves to be an obstacle in their willingness to identify with or practice Christianity. For instance, 81 percent of young people at least partially agree with the statement, “I think the Church’s teachings on sexuality and homosexuality are wrong,” with 45 percent of all youth in complete agreement with the statement. For Christians, 37 percent are also in complete agreement. More than half of Irish youth (53% “completely” + “mostly”) say they cannot personally live by the Church’s teachings on sexuality, a stance only slightly lower for Christians at 46 percent (“completely” + “mostly”).

6. Attending Christian Events Is Linked to a More Personal and Active Faith Life
Christian events—which may include festivals, retreats, weekends away, community outreach events, pilgrimages, local mission trips and overseas mission trips—reach a majority of young people (58%). If the goal of these events is to encourage an active faith life, they seem to be successful: There is a high correlation between Christian practices and participation in Christian events. For instance, if a Christian has attended a Christian event, he or she is significantly more likely than those who have not attended one to report a personal prayer life (53% vs. 25%), to attend church monthly (53% vs. 22%) and to say that Jesus has deeply transformed his or her life (25% vs. 11%). 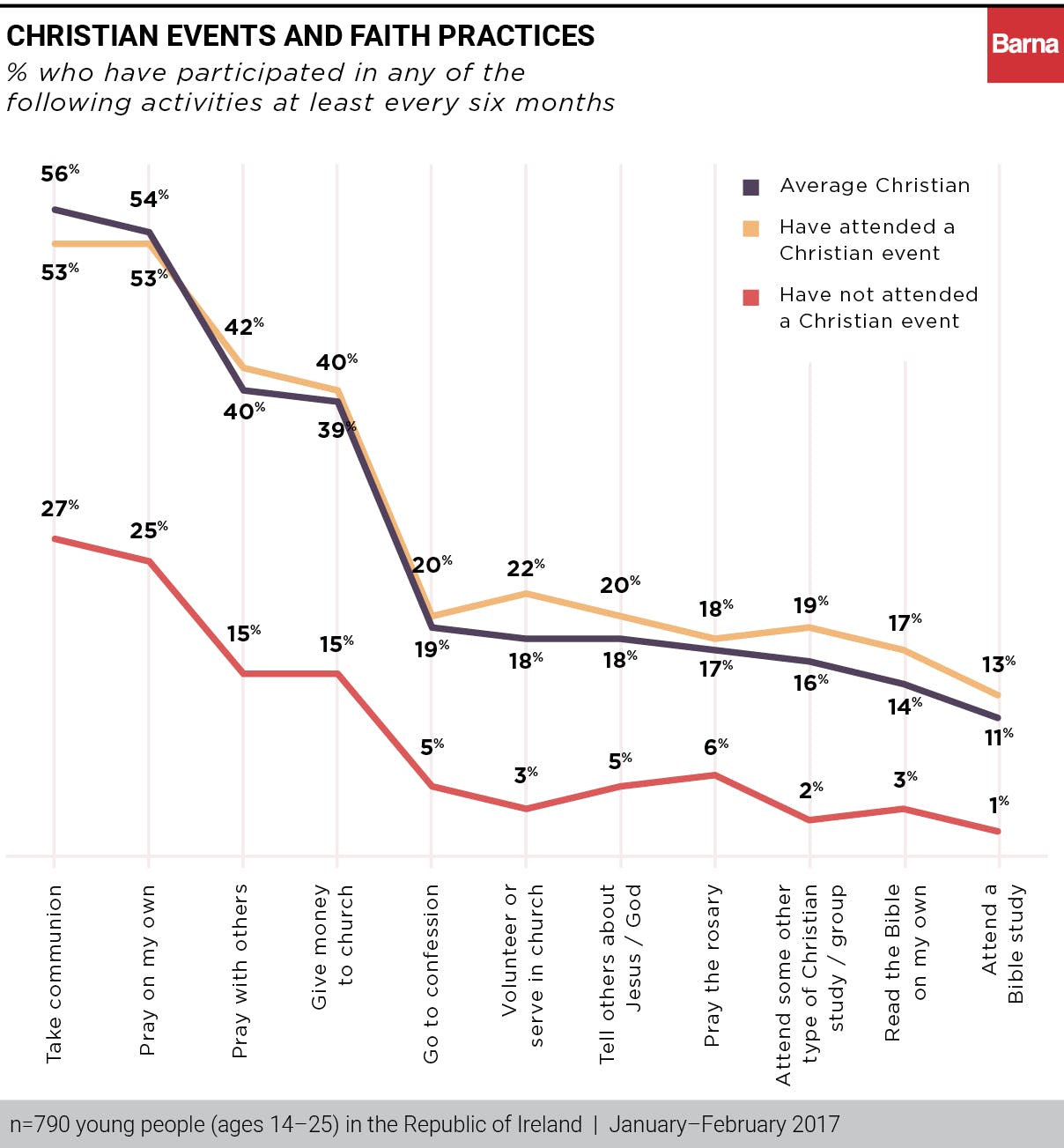 Get Inside the Minds of Irish Youth

7. Academic and Professional Pressures Weigh Significantly on the Minds of Young Irish People
The strongest concerns of youth and young adults are closely connected with a pursuit of success and stability, as evidenced in preoccupations with money, test scores and job security. For instance, test scores—which can determine an individual’s university admission and set the course for their further study and potential work opportunities—are in the top three stressors for more than two-thirds of teens (67%). Young adults (ages 19-25) who have finished school and are either in college or entering the workforce tend to be more concerned about “not having enough money” (55%) and “job security” (31%). The list of potential worries included in Barna’s questionnaire were based on concerns previously raised by Irish youth during in-person interviews. 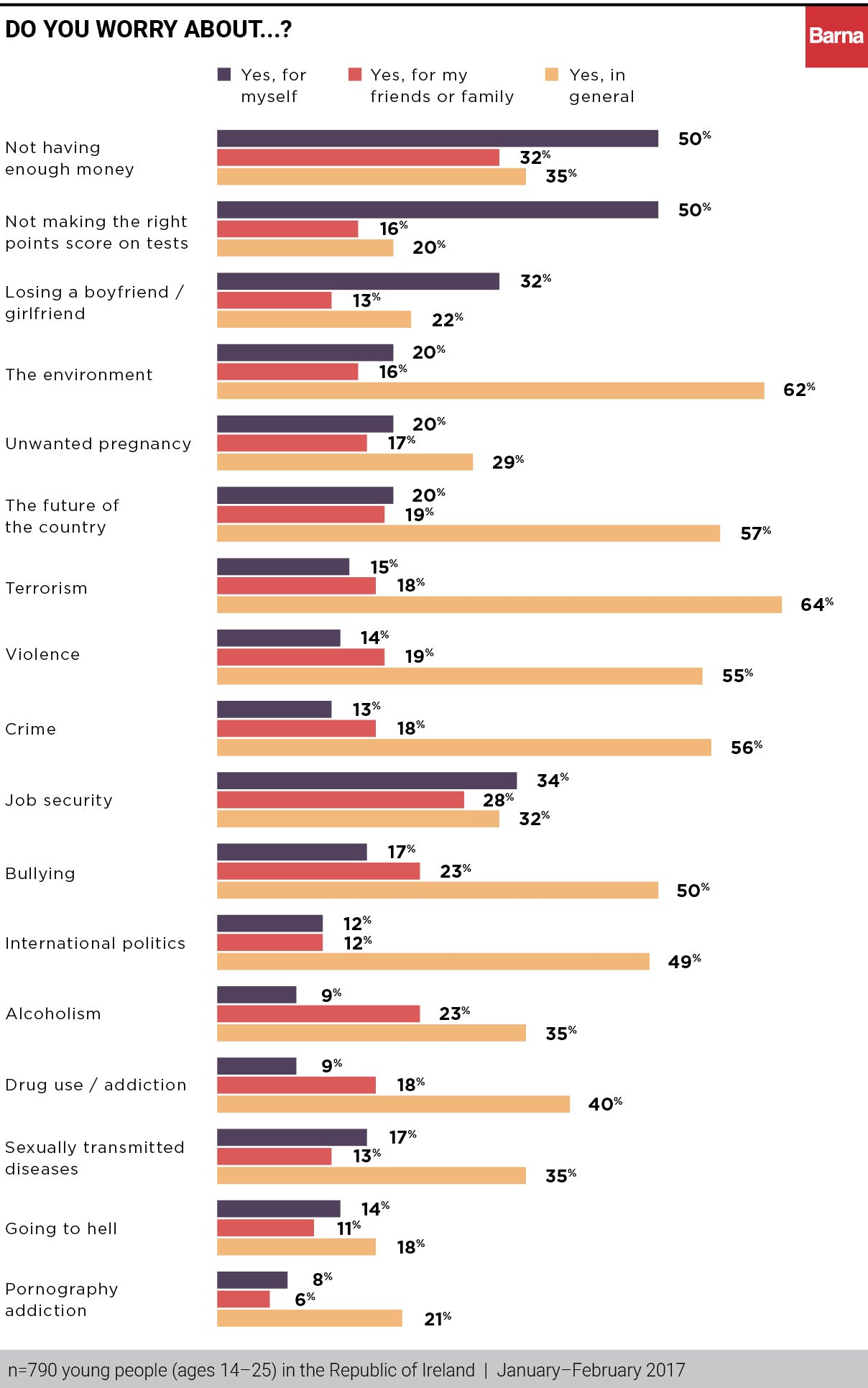 8. Irish Youth Welcome a Closer Relationship Between Catholics and Non-Catholic Christians
More than half of young Christians (51%) and nearly all youth workers say there is too much tension between the Catholic Church and other Christian churches. Young people in Ireland are eager, however, for more unity across denominational ministries. In fact, a large majority of Christian young people (71%) would be happy to go to an event held for both Catholics and non-Catholics. In addition, 79 percent of Christian youth and all but a few youth workers agree at least somewhat that a person can be a good Christian regardless of the church he or she attends. 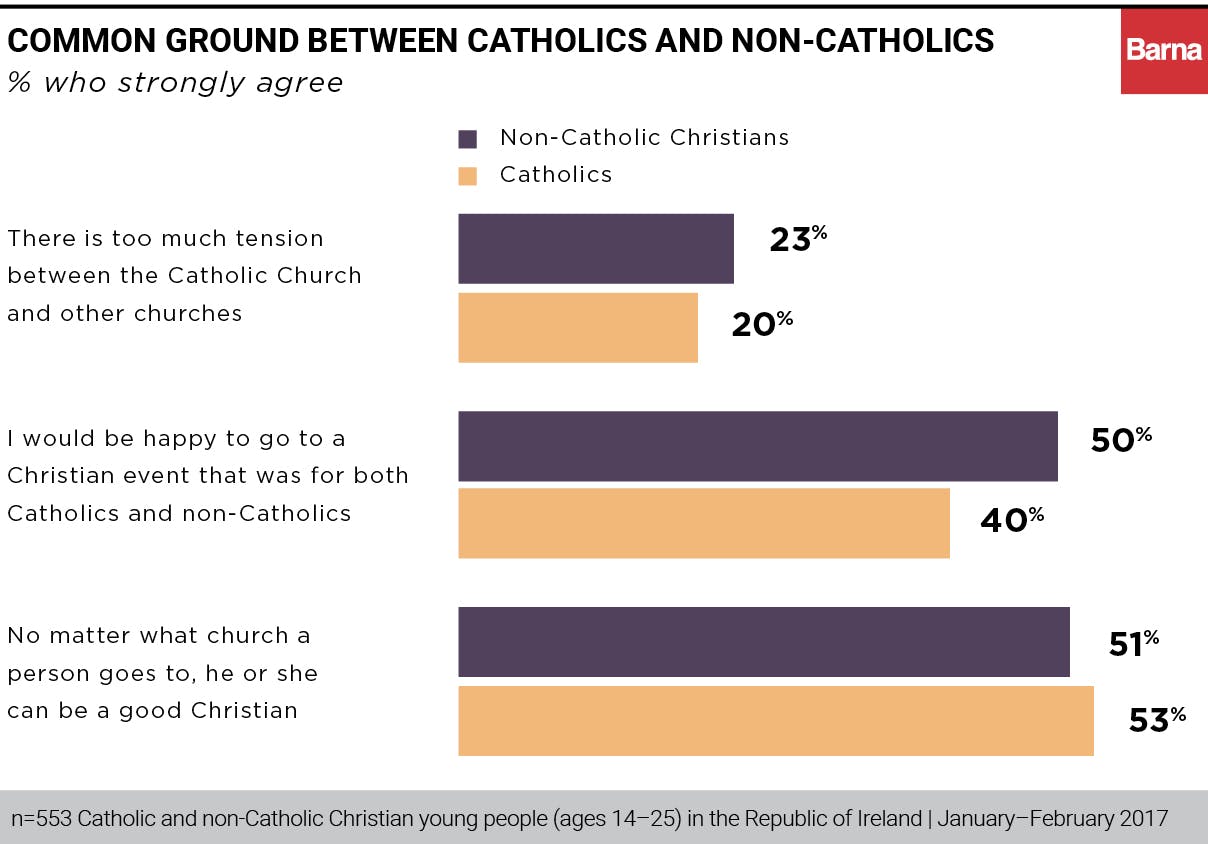 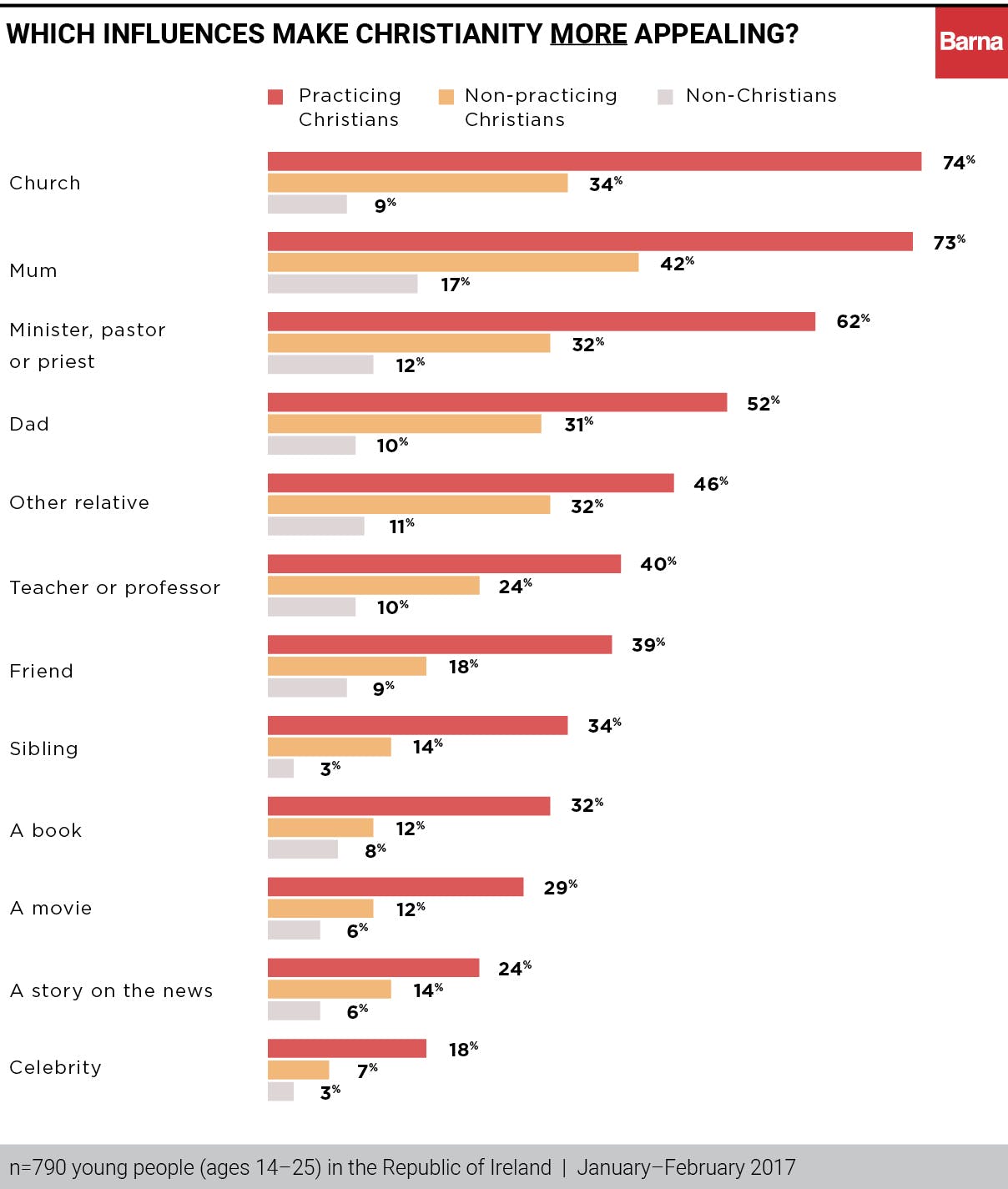 55% of Christian youth in Ireland do not know an adult who talks with them about faith. Click To Tweet

10. Irish Youth Are Open to a Deeper, More Personal Faith Expression
Despite the numerous pressures facing their generation, some members of the young groups Barna surveyed are compassionate and eager for a dynamic religious expression. More than a third of Irish youth (37%) say it’s mostly or completely true that they’d like to find a way to follow Jesus that connects to the world they live in. This is even more true of Christians (47%), particularly practicing ones (71%). One in four young Christians (25%) feels it’s important that their lifestyle reflect their relationship with God, and one in five (19%) wants to help the Church return to the priorities Jesus intended for it.

What the Research Means
In this unique era in the Republic of Ireland—when the nation’s spiritual landscape is shifting, the values of popular culture are often at odds with religious conviction, and success is by no means guaranteed—young Irish people need meaningful spiritual relationships and encounters to achieve a healthy sense of perspective on their life and faith. Adults who care about young people’s spiritual development could play a key role in taking them from a nominal to a sincere faith—a shift that could re-define an individual’s life, and on a larger scale, the spiritual landscape of the Republic of Ireland.

“With the seismic shifts that have taken place in Irish culture over the last 20 years,” says Ruth Garvey-Williams, editor of Ireland’s cross-denominational Christian magazine VOX, “along with the digital revolution of the last decade, young people are bombarded with myriad messages from every conceivable perspective. More than ever before, young people are hungry for mentors who will journey with them as they explore their questions around faith and spirituality. And yet, it is also evident that older Christians often seem unable to provide the kind of environment in which there is freedom and safety for young people to wrestle with their concerns.

“There is a significant opportunity for older Christians who will live out their faith with integrity and authenticity—people who will be like Jesus (bearing fruit of the Spirit) and point to Jesus,” continues Garvey-Williams. “Healthy discipleship will create safe spaces for younger people to ask their questions without fear of immediate condemnation or criticism. It will also focus on teaching young people the tools to think through the tough issues by seeking God and searching the scriptures rather than demanding conformity to one particular view.”

About the Research
The data contained in this report originated through a research study conducted by the Barna Group of Ventura, California. The study was commissioned by Christ in Youth in Joplin, Missouri. To understand the state of faith among Irish youth, Barna conducted a study that approached the question from several angles. In the first phase, Barna and Christ in Youth gathered youth workers from a variety of denominations for focus groups. In the second phase, four Irish interviewers spoke to young people and their youth leaders. Youth leaders who weren’t interviewed in person also had the opportunity to respond to the same survey online. The online youth study was distributed to young people in the Republic of Ireland, ages 14–25. A total of 790 youth participated in this research study. Based on this sample size, the sampling error for this study is 3.5 percentage points at the 95-percent confidence level.

The Buzz About Alcohol: America’s Views on Booze