Read more about the state of friendships in Barna Trends 2018

Earlier this year, a study from health insurer Cigna found that most Americans report feeling lonely, left out and not known. This research mirrors a host of other reports and commentary (including our own) on the increasing isolation of Americans. In light of this seeming loneliness epidemic, Barna has been examining the role of friendships over the years and how Americans—across all demographics—make, keep and identify with friends. In this article, drawing from a number of recent Barna studies, we take a look at the state of friendship in America.

Americans Are Friendly But Lonely
The majority of adults has anywhere between two and five close friends (62%), but one in five regularly or often feels lonely. Those who report the highest levels of loneliness are single, male, young and likely earning a lower income. Those who aren’t working, or those who are part of the growing proportion of Americans who work remotely or for themselves, are likely making fewer friends because a plurality of adults (42%) meets their friends on the job. Outside of their place of employment, American adults meet their closest friends through other friends (35%) and in their neighborhood (29)%.

The interactions Americans have with their neighbors (those who live within easy walking distance)—which happen either weekly (39%) or daily (28%)—are usually friendly but consist mostly of a brief greeting with very little interaction otherwise (37%). One in four (25%) has managed to become friends with one or two of their neighbors. Overall, celebrations are what bring together most American neighbors: one-quarter says they eat dinner together (24%), celebrate birthdays or holidays together (23%), and gather for neighborhood events (22%). 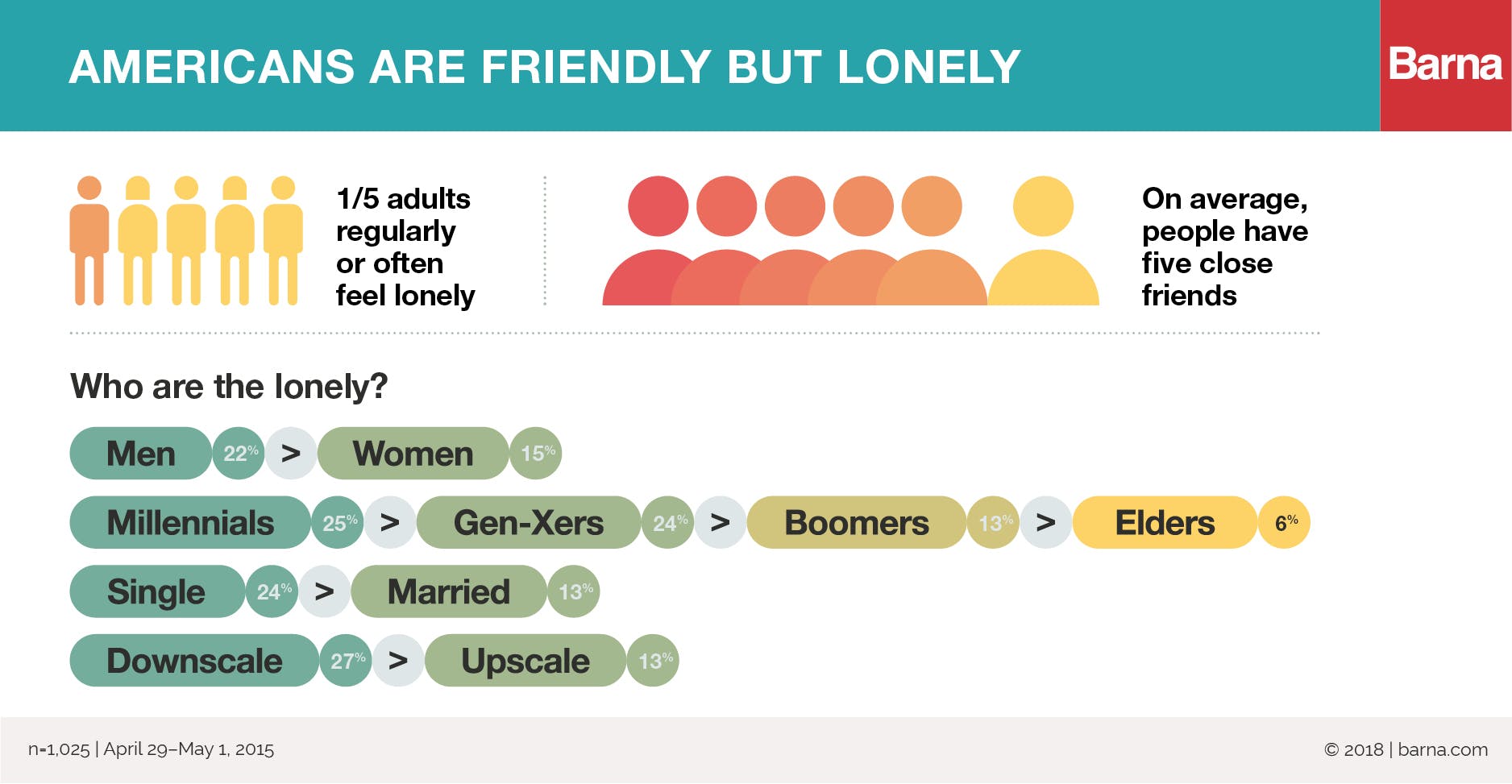 Opposites (Don’t) Attract
No matter where friends meet, people tend to be drawn to those who are more like them. Asked whether their current friends are mostly similar to themselves or mostly different from them in a number of areas, the majority always chooses mostly similar. This is true for religious beliefs (62% similar, 38% different), race or ethnicity (74% vs. 26%), income (56% vs. 44%), education level (63% vs. 37%), social status (70% vs. 30%), political views (62% vs. 38%) and life stage (69% vs. 31%). In particular, evangelicals are less likely than most to have friends who are different than them, especially when it comes to religious beliefs (91% mostly similar), ethnicity (88%), and political views (86%). As we’ve seen in other Barna research, friendship with those who are different to us increases empathy and causes a shift in our views toward them—in very positive ways. 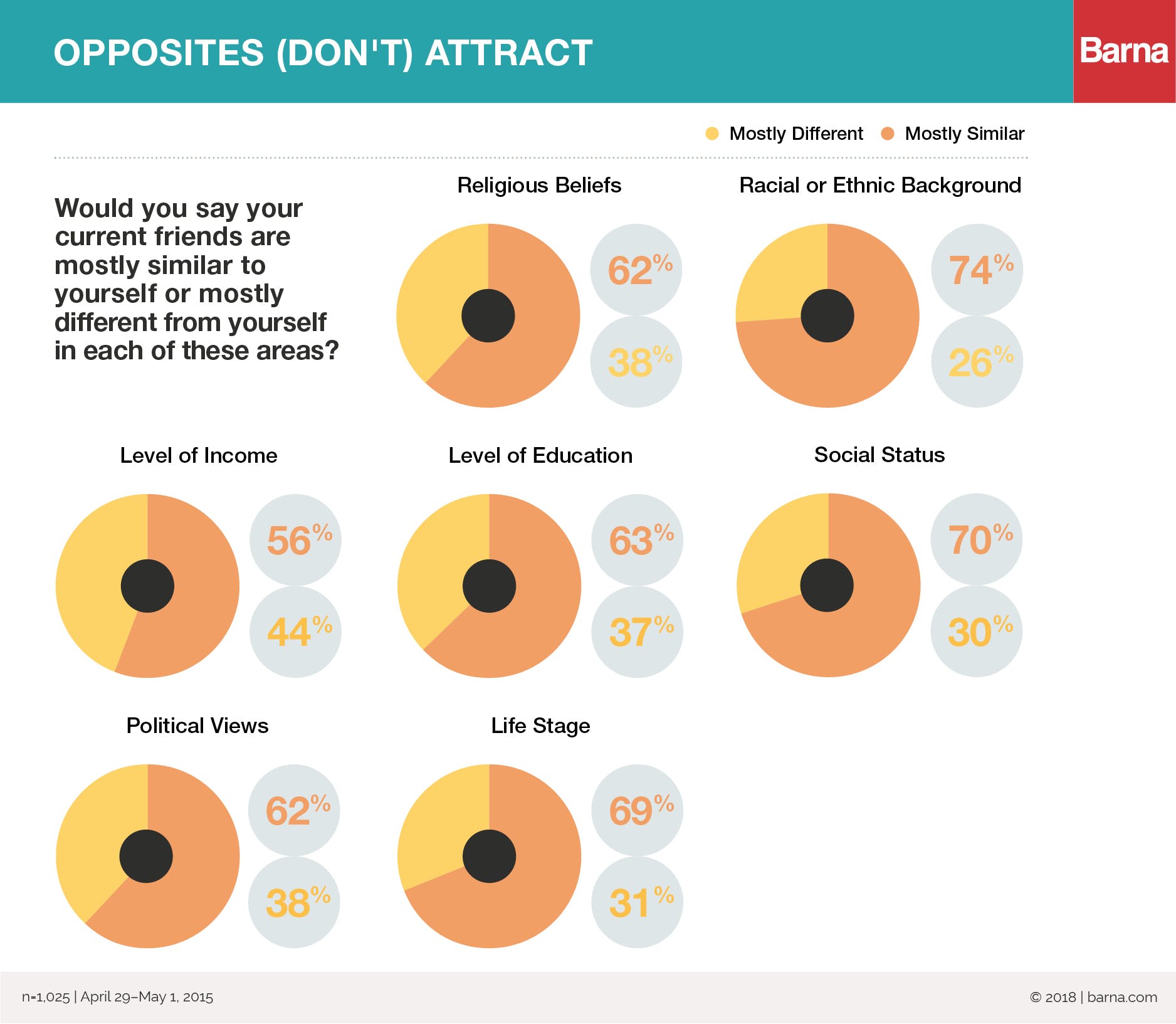 School Friends Are Still Important for “Screenagers”
In contrast, teens don’t avoid difference as much. In fact, most teens (81%) say they often or occasionally interact with people who do not share or do not understand important parts of their identity. As we’ve seen in Barna’s most recent research, Gen Z is the most diverse generation we’ve observed in American history, and this could be driving their engagement with those unlike them. Nearly two-thirds (63%) enjoy spending time with people who are different from them. Only 12 percent indicate they do not. A smaller majority (56%) is comfortable in this situation, and thirty-one percent say they don’t share the same belief system as most of their friends. These friends tend to shape, but not always reflect their identity. For instance, more than three-quarters of teens (76%) agree with the statement “My group of friends is very important to my sense of self”—more than their family.

Teens (ages 13–19) are most likely to form friendships at school. Overall, 86 percent indicate they have found friends in their classes. This is more common than school-based extracurricular activities (31%), athletic teams (25%), church or another place of worship (20%) or their neighborhood (24%). Engaged Christian teens (76%) are less likely to find their friends in class (compared with 88% from other faiths, 86% of those with no faith). They are more likely to form friendships where they worship (66%), compared to teens of other faiths (19%) or no faith (5%).

Most Americans Believe Men and Women Can Be Friends
While there is no shortage of opinions on the matter, most people Barna surveyed think friendships between men and women are possible and actually have at least one friend of the opposite sex. A plurality (25%), however, indicates they have just one close friend of the opposite sex, and the average among all adults is 1.4. In general, the number of friends of the opposite sex appears to rise gradually with age, likely a result of bonds that grow over time. Among Millennials specifically, Barna asked whether men and women can be “just friends” if they are both single. A large majority—more than nine in 10 (92%)—says yes, which hardly changes if they are in a committed relationship (89%). Among those who believe it could be difficult, the main challenges are that attraction / feelings exist or will develop at some point (36%), the reality of sexual tension and temptation will get in the way (24%) or that it will complicate other friendships / relationships (17%). 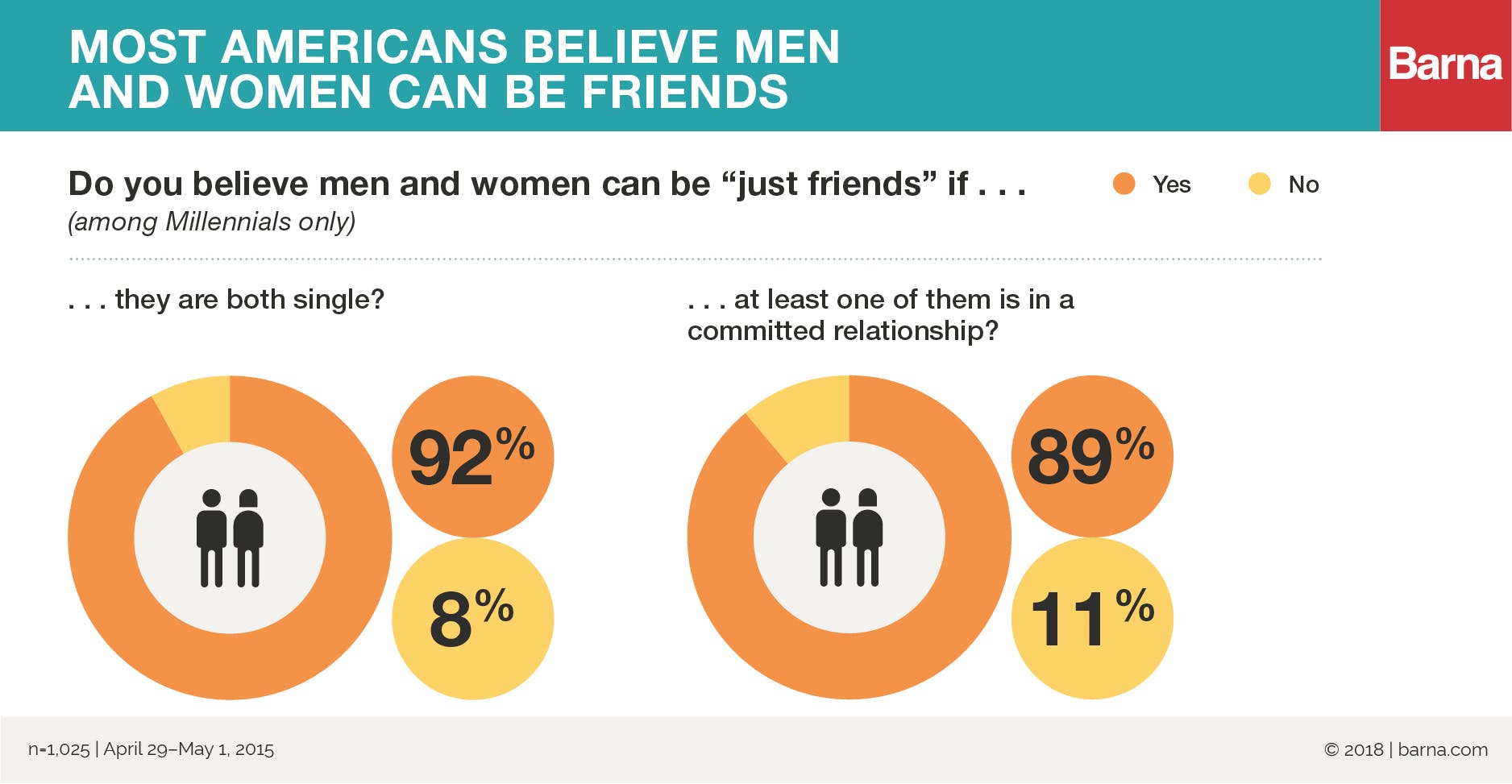 Pastors Satisfied with Friends but Struggle with Loneliness
Barna’s research on pastors over the years has been comprehensive, and one of the key areas of this research has been their well-being. What Barna found is that although pastors can often experience difficulty when making friends, two-thirds say they are happy with their friendships, rating their satisfaction in the friend department as either excellent (34%) or good (33%). However, there are some areas of concern. Perhaps because of the nature of their work—which can serve to set pastors apart from those they minister to, and even from their peers—pastors are more likely than the general population to feel lonely and to isolate themselves from others. In addition, only one-third of pastors express the strongest level of satisfaction with their friendships, with around one in three indicating comparatively low satisfaction in this area—on par with or only slightly better than U.S. adults overall (28% excellent, 33% good). Overall, intimacy with friends appears to be a challenge not only for the average U.S. adult but for spiritual leaders, despite their relationally driven vocation. 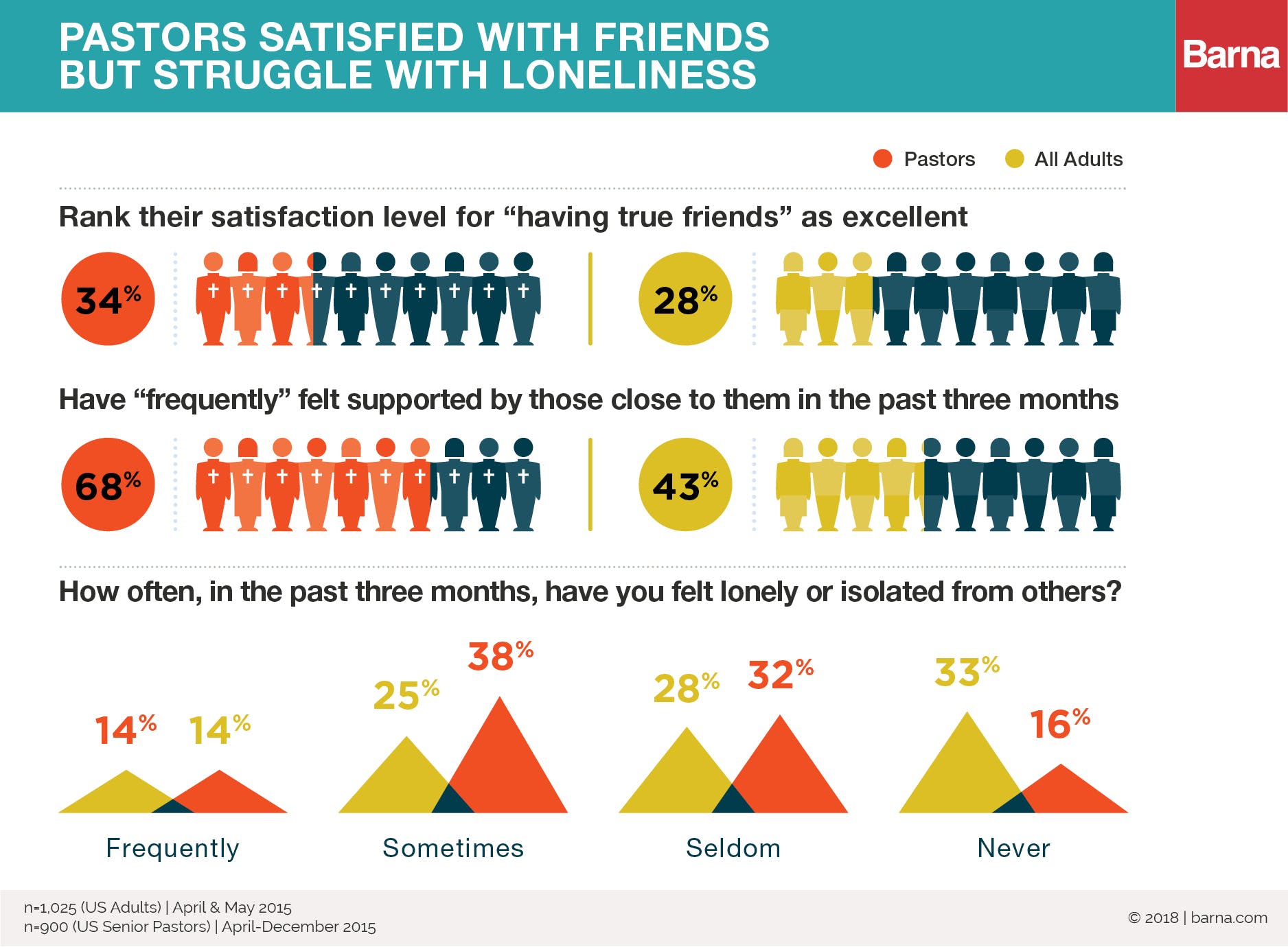 About the Research
The statistics and data in this article have been drawn from a series of national public opinion surveys conducted by Barna Group. Unless otherwise noted, all the studies referenced in the article were conducted by Barna Group, among a nationally representative sample of the population identified. Barna relies on both online and telephone data collection methods, including interviews with cell phone users, in an effort to include people of all ages who no longer have a landline in their home and rely solely on their mobile phones. All percentages reflect the percent of U.S. adults, unless otherwise noted.

Read more about the state of friendships in Barna Trends 2018

In light of the International Day for the Eradication of Poverty on October 17, this infographic looks at the correlation between donating to causes aimed at helping the world’s poor and other acts of engagement, service and compassion—in other words, the more you care, the more you care.