A major finding from our Translating the Great Commission report, produced in partnership with Seed Company, is that more than half of U.S. churchgoers have not heard of the Great Commission. Additionally, even when presented with a list of passages, 37 percent don’t recognize which well-known passage typically goes by this name.

Since releasing this data, Barna has heard from members and leaders of the Church who were surprised or even concerned by this statistic, wondering what it might also reveal about the nature of sermon teaching, biblical literacy and engagement or Christian missions today. Below, experts and practitioners weigh in on how the dynamics of spreading the gospel and making disciples are playing out in their respective contexts.

“Ignorance of this term can be attributed to churches not teaching this concept enough anymore.”

Allen Yeh is associate professor of intercultural studies and missiology at Biola University and the author of Polycentric Missiology. 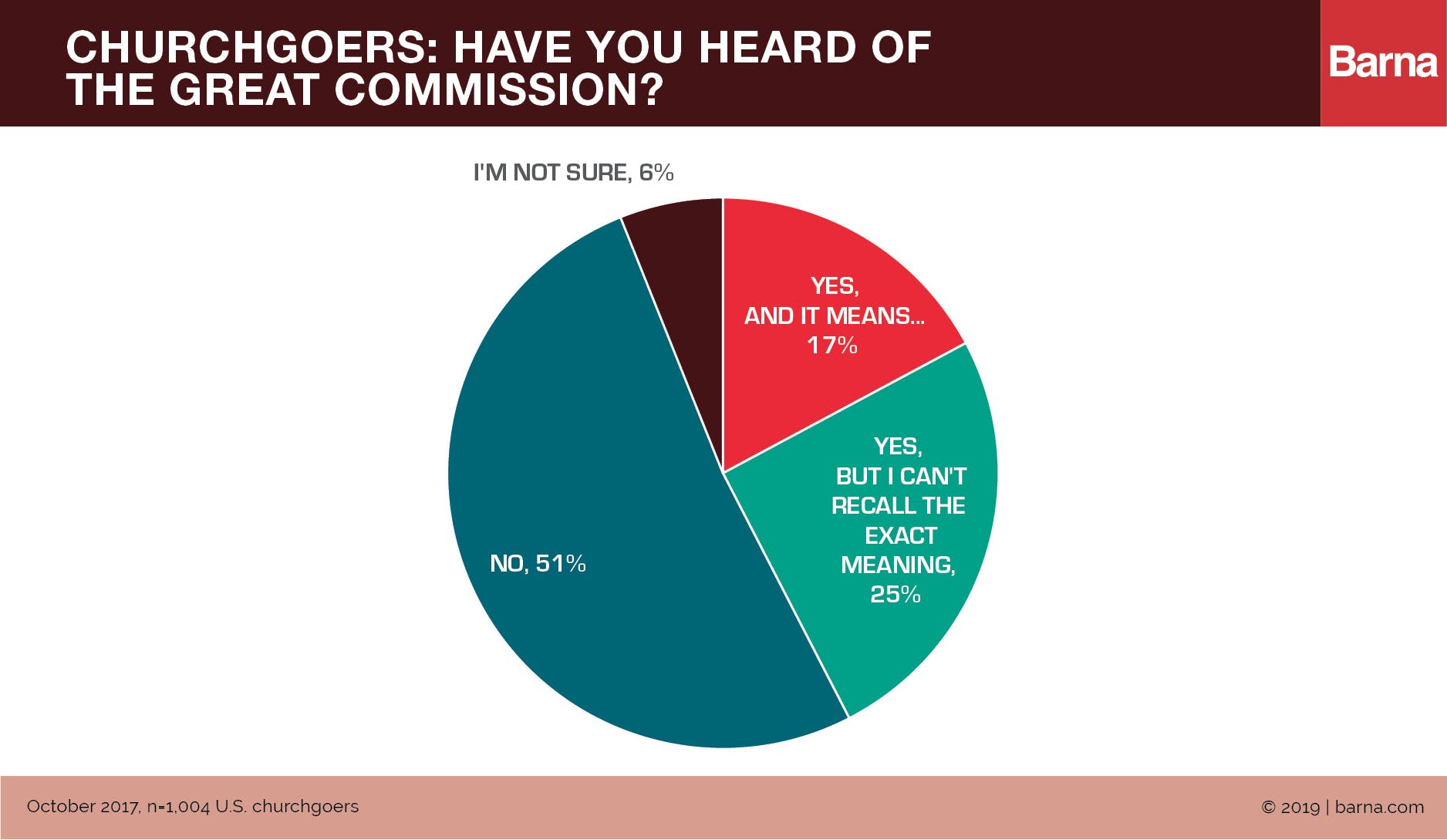 Barna: A key (and some would say surprising) finding in our report is that half of U.S. churchgoers have not heard of “the Great Commission.” Why do you think this is?

I think some of the ignorance of this term can be attributed to churches not teaching this concept enough any more. I certainly heard it a lot growing up, but perhaps it has been lost on this current generation of believers. Maybe we need a new “William Carey” to revitalize interest and educate people again on it!

“The Great Commission and the glory of God it declares must be more than a verse.”

David Daniels is lead pastor of Pantego Bible Church in Fort Worth, Texas and the author of Next Step Discipleship and Next Step Church 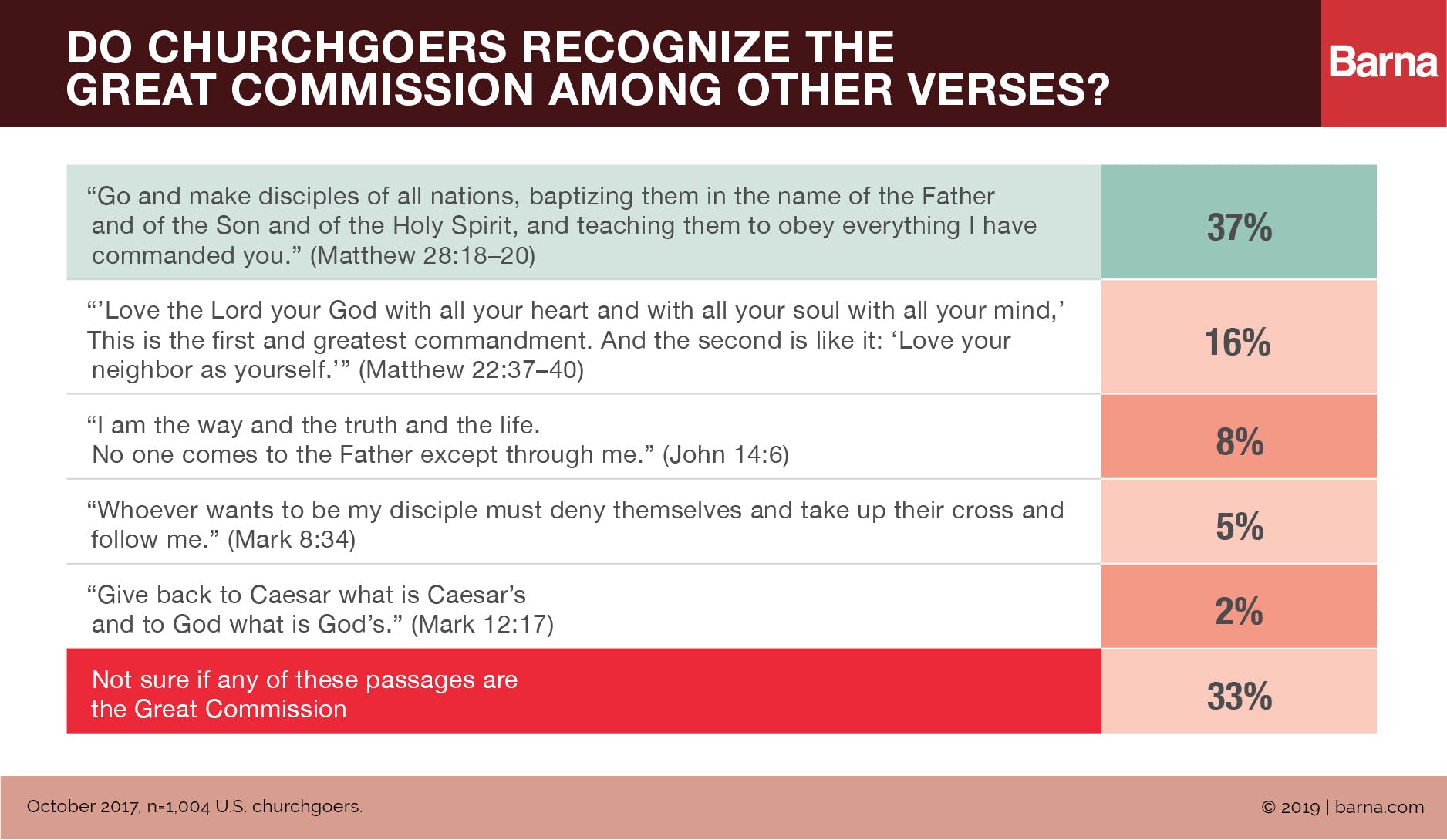 Barna: What do you feel pastors’ approach should be in communicating about the Great Commission (as a verse, concept and mission)?

Daniels: Some churches view mission and evangelism as “one item on a spiritual buffet.” That is, the Great Commission is one of many options for churchgoers who feel personally inclined. Other churches view mission and evangelism as “one item on a spiritual plate”—like beets, the Great Commission doesn’t appeal to most people, but everyone has to eat their vegetables, so to speak. Both of these distorted views fail to put gospel proclamation as the centerpiece of the Church’s existence. David Bosch rightly states in his book Transforming Mission, “There is a church because there is a mission, not vice-versa.” When pastors think exclusively about the gospel as God’s means for serving people instead of the Church’s motivation to serve the world, the Great Commission gets lost in the flurry of church-centric activities. The Great Commission and the glory of God it declares must be more than a verse; it must be the driving force of a disciple-making church.

“Scripture unlocks one’s understanding of the person of Jesus Christ.”

Joyce Williams is Chairwoman of the Board for Seed Company.

Barna: What do you see as the function or role of scripture in missions work? Is the presence of the Bible (particularly in a heart language) essential, and if so, what changes might it prompt?

Williams: I am convinced that scripture in one’s heart language is the key that unlocks one’s understanding of the person of Jesus Christ. Scripture is both simple and complex. It teaches in parables and stories and is therefore best understood in the language that one knows best, their heart language. Translating the Bible into the heart languages also allows the less educated to have access to the scriptures because they may not understand their own national language. Once the scripture is translated, Truth enters into a community. It breaks the bonds of sin and corruption and teaches us to love and forgive one another. Its message is powerful.

Photo by Slava Bowman on Unsplash

When it comes to vocation, pastors often talk about the “call to ministry.” But what does that process actually look like, and how satisfied are pastors in their decision to pursue ministry?