How Liturgical Are Today’s Christians?

Tomorrow is Ash Wednesday, the inauguration of the 40-day liturgical season of Lent, observed with the marking of ashes to the forehead. This ritual and other practices for congregational worship like readings, confessions and creeds are part of what is known as Christian liturgy. Though practiced for centuries, these traditions are mostly absent from many contemporary worship expressions today. But just how familiar are practicing Christians (those who attend a religious service at least once a month, say their faith is very important and self-identify as a Christian) with the concept of Christian liturgy? What is their personal experience with it and what rituals do they take part in as a church community? In this new study, explored at-length in Barna Trends, here is what Barna learned about American practicing Christians’ current commitment to a particular style of service or spiritual expression.

Strong Familiarity with Christian Liturgy
Most practicing Christians are at least aware of the concept of liturgy: Just over six in 10 are either very (32%) or somewhat familiar (30%) with Christian liturgy, while one-fifth (19%) has never heard of it. But even though Christian liturgy is at least somewhat recognizable to most, those who have a strong familiarity with it are concentrated in ethnic and denominational pockets. For instance, more than one-third of white practicing Christians (37%) and almost three in 10 Hispanic practicing Christians (28%) are very familiar with the concept of liturgy. Even though Catholic practice has been trending down, there are strong Catholic (and thus liturgical) roots and awareness in Hispanic communities across the country. One in 7 (14%) black practicing Christians is well acquainted with the concept, likely because many black faith communities developed around less institutional and more charismatic corporate worship. Among faith segments, evangelicals are the least aware, while Catholics and mainline Protestants (American Baptists, Episcopal, Lutheran, United Methodist, Presbyterian, etc.) know it best. Almost half as many evangelicals as non-evangelicals are very familiar with the concept (19% vs. 35%), while half of Catholics (49%), and more than one-third of Protestant mainliners (37%) are very familiar. Similar to evangelicals, only 18 percent of Protestant non-mainliners know liturgical practice well. Looking at generational breakdowns, Millennials (34%) and Gen X (41%) are especially acquainted with liturgy, both more so than either Boomers (26%) or Elders (31%)—though, as we’ll explore below, younger generations’ familiarity is likely a product of curiosity rather than practice or affiliation.

Most practicing Christians are aware of the concept of liturgy. One-fifth has never heard of it. Click To Tweet 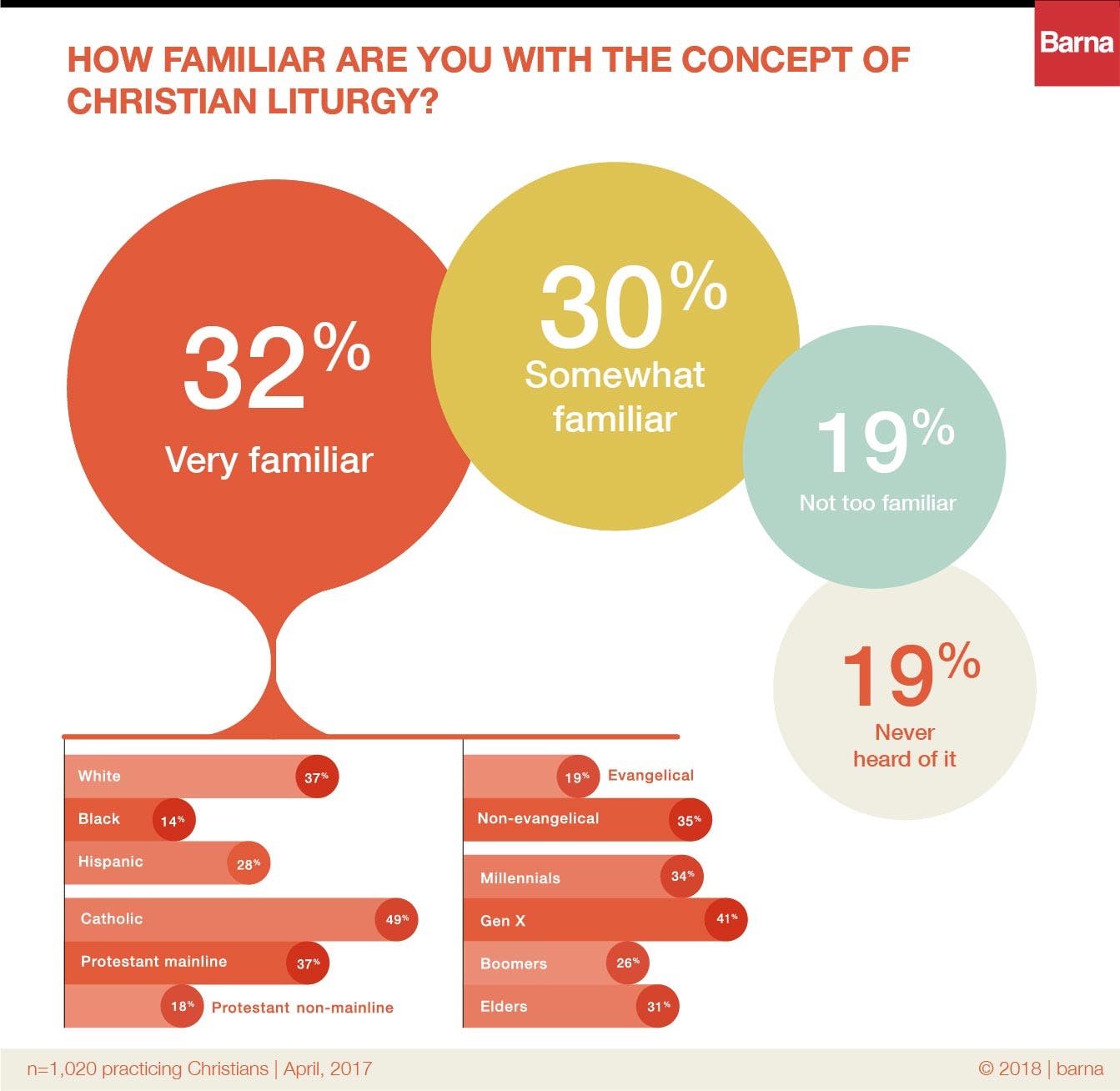 Liturgy Connects Christians to Culture, Tradition and History
Familiarity with liturgical styles of Christian worship is one thing; personal experience is another. More than one-third of practicing Christians (35%) says liturgy is an important part of their culture and tradition, a sentiment much more common among older generations (43% Elders, 39%Boomers) than younger ones (29% Millennials, 27% Gen X). The same proportion appreciates it as a practice alongside other forms and styles of worship (34%), and a little more than three in 10 (31%) say it helps them feel connected to church history. Again, these attitudes are all more common among older generations, who are more acquainted with traditional forms of worship. Small proportions of those who have some experience with liturgy say it’s always been part of their life (13%) or that they prefer it (17%). Meanwhile, others prefer contemporary forms of worship (22%) or say liturgy has nothing to do with their faith (12%).

Millennials are the most likely to change from liturgical to non-liturgical styles, and vice-versa. Click To Tweet 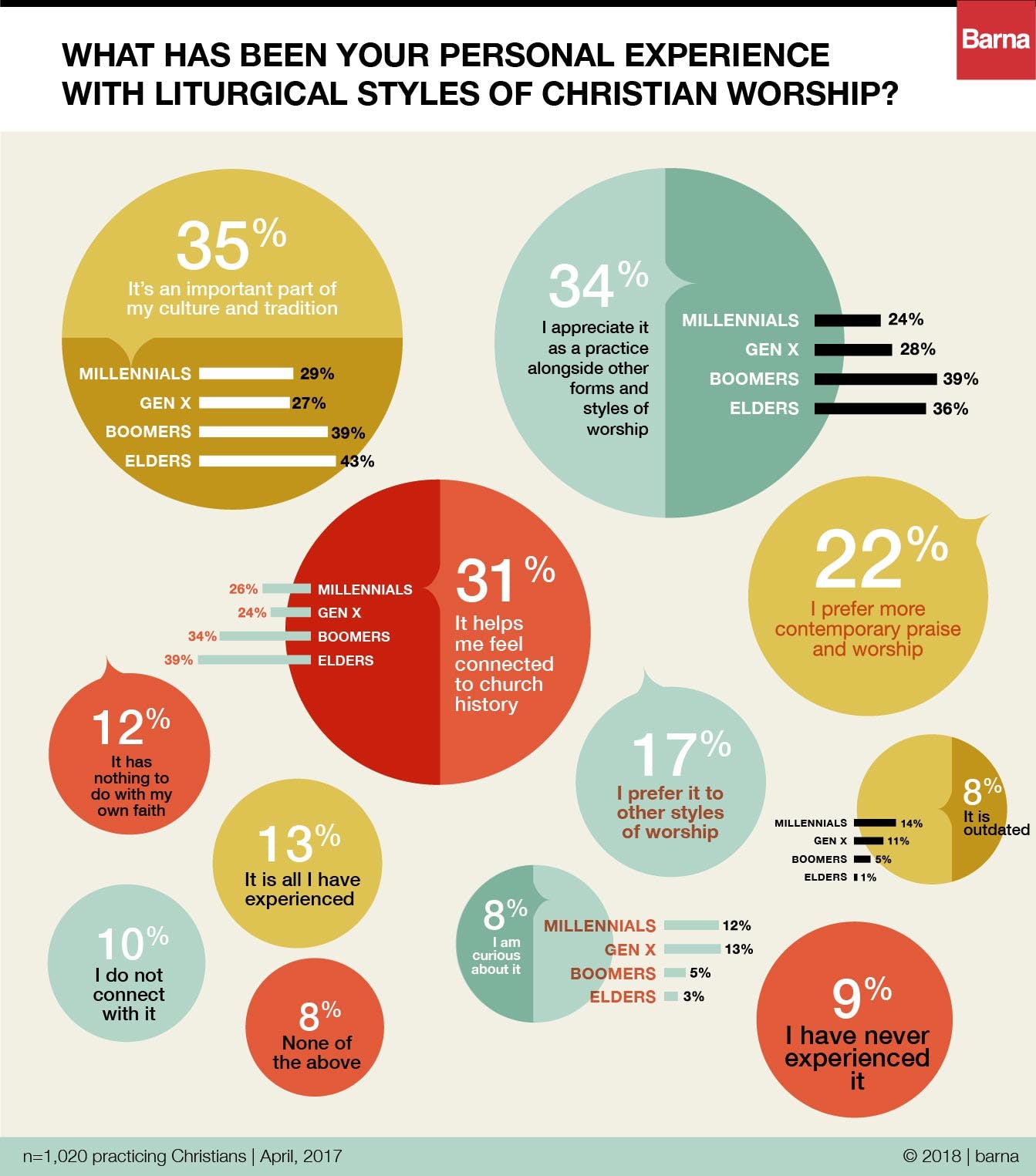 Barna Trends 2018: Your comprehensive guide to the latest cultural, religious and political trends 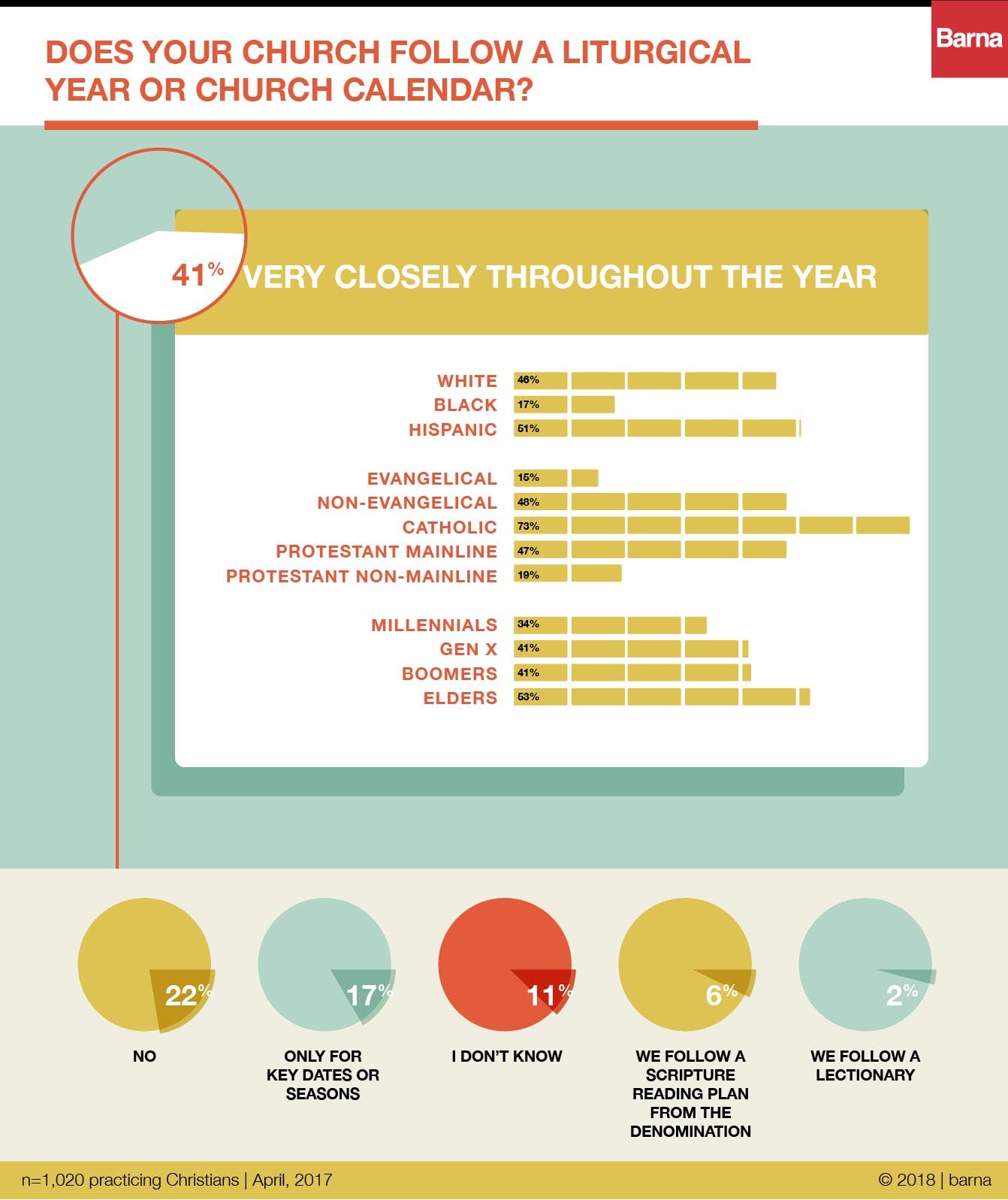 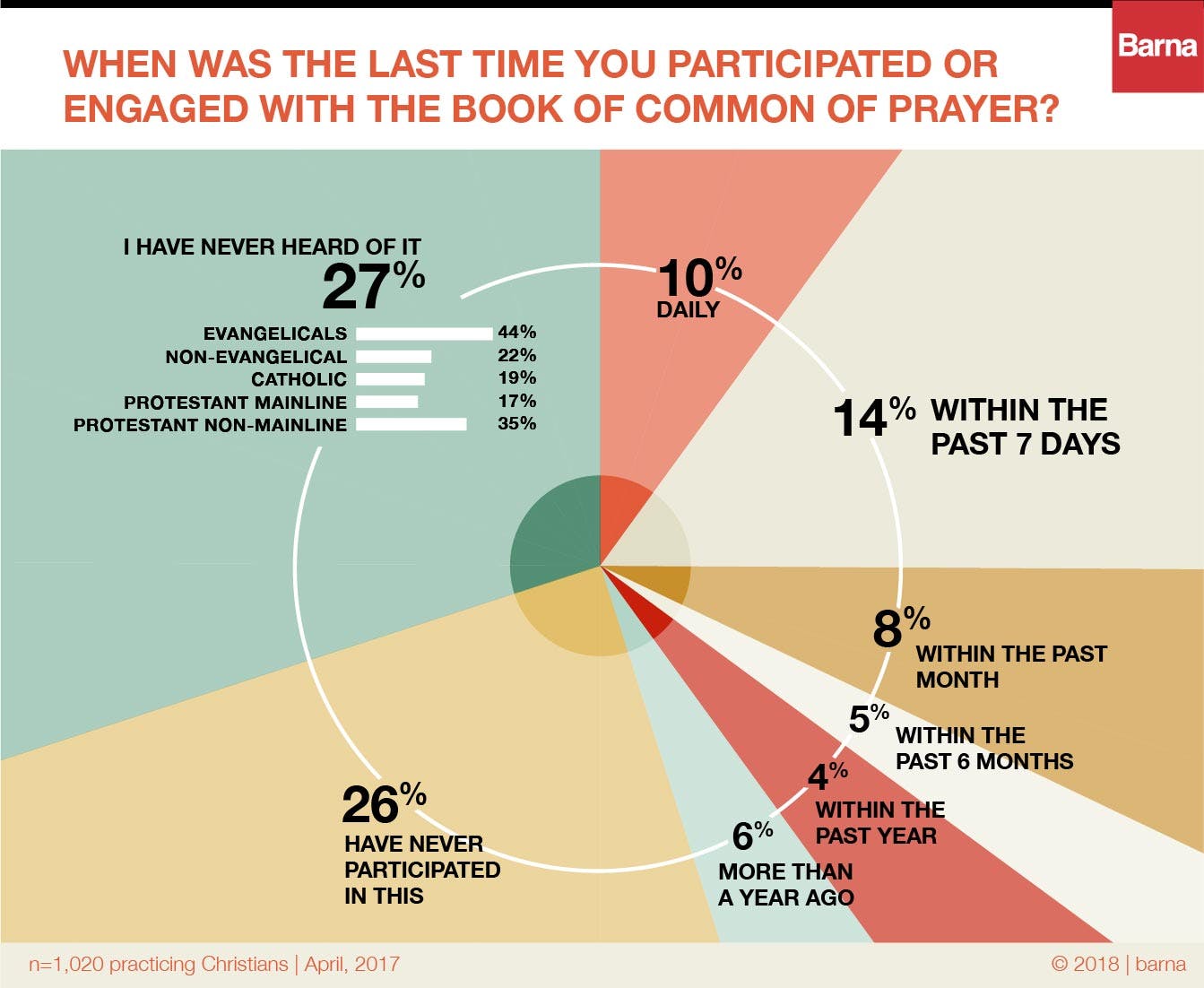 About the Research
Interviews with U.S. practicing Christian adults included 1,020 web-based surveys conducted among a representative sample of practicing Christian adults over the age of 18 in each of the 50 United States. The survey was conducted in April 2017. The sampling error for this study is plus or minus 3 percentage points, at the 95% confidence level. Minimal statistical weighting was used to calibrate the sample to known population percentages in relation to demographic variables.

Evangelical: Meet the born again criteria plus seven other conditions. These conditions include saying their faith is very important in their life today; believing they have a personal responsibility to share their religious beliefs about Christ with non-Christians; believing that Satan exists; believing that Jesus Christ lived a sinless life on earth; asserting that the Bible is accurate in all that it teaches; believing that eternal salvation is possible only through grace, not works; and describing God as the all-knowing, all-powerful, perfect deity who created the universe and still rules it today. Being classified as an evangelical is not dependent upon church attendance or the denominational affiliation of the church attended. Respondents were not asked to describe themselves as “evangelical.”

Barna just unveiled a landmark study of Gen Z at a live event (and national webcast) last month in Atlanta. Throughout the event we asked for viewers to submit their own questions about Gen Z. We received an overwhelming response and weren’t able to get to all of them. So we’ve decided to address some of your most common and burning questions about Gen Z right here.