Church Dropouts Have Risen to 64%—But What About Those Who Stay?

Research in this article comes from Faith for Exiles. Order your copy today!

When Barna president David Kinnaman published his 2011 book You Lost Me, we heard from many people (especially church leaders) who were shocked to learn that 59 percent of young adults with a Christian background had dropped out of church at some point during their 20s—many for just a time, but some for good.

Eight years later, research for Kinnaman’s new book Faith for Exiles: 5 Ways for a New Generation to Follow Jesus in Digital Babylon reveals that the church dropout problem is still a problem. In fact, the percentage of young-adult dropouts has increased from 59 to 64 percent. Nearly two-thirds of U.S. 18–29-year-olds who grew up in church tell Barna they have withdrawn from church involvement as an adult after having been active as a child or teen.

It is not all bad news, however. Through more than a decade of interviewing teens and young adults, Barna researchers kept encountering a small but significant number of young Christians who run counter to the overall trend. So, using the same research parameters as in You Lost Me (18–29-year-olds with a Christian background), Kinnaman and the Barna team fielded new research to study the countertrend. Yes, most Christian twentysomethings spend at least some time disconnected from a faith community. But what about those who stay? What, if anything, do they have in common?

In Faith for Exiles, Kinnaman and his coauthor, Mark Matlock, get to know the one in 10 young Christians for whom they’ve coined the term “resilient disciples.” “From a numbers point of view,” Kinnaman says, “10 percent of young Christians amounts to just under four million 18–29-year-olds in the U.S. who follow Jesus and are resiliently faithful. In spite of the tensions they feel between church and everyday life, they keep showing up.”

So what does it mean to be a resilient disciple? As defined in Faith for Exiles, individuals in this group: have made a commitment to Jesus, who they believe was crucified and raised to conquer sin and death; are involved in a faith community beyond attendance at worship services; and strongly affirm that the Bible is inspired by God and contains truth about the world. In addition, they agree with one or more of the following statements that speak to the exilic conditions in which their faith still thrives:

These highly engaged young Christians are the exemplars of Faith for Exiles, who are concerned for and thoughtful about how their faith in Christ intersects meaningfully and missionally with the world around them. “We kept probing the data to discern the story behind their resilience,” Kinnaman adds. “What can we learn from them? What makes them tick? What practices distinguish them from the norm?” 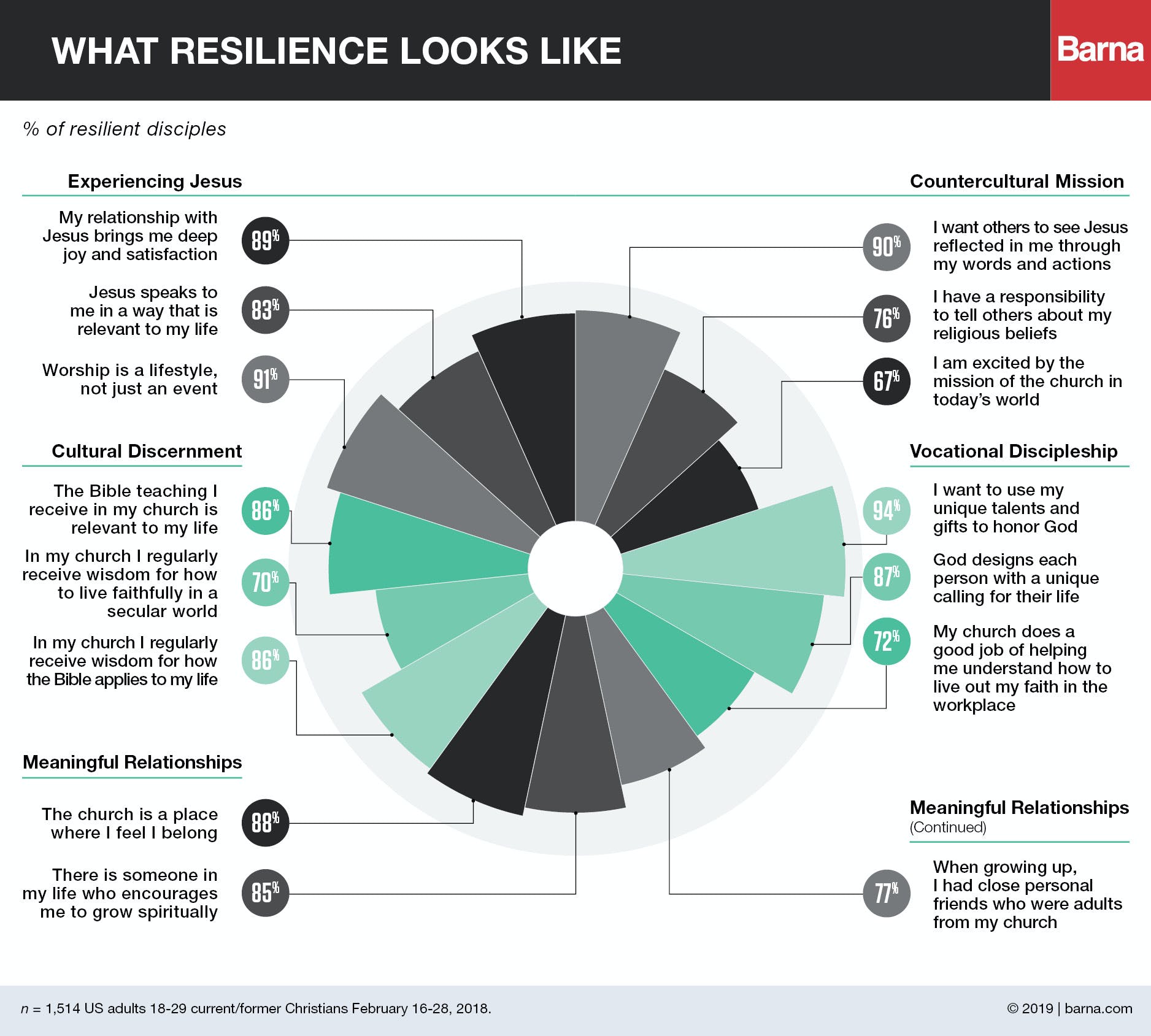 As the infographic above shows, resilient disciples highly prioritize their life of faith inside and outside their place of worship. “These sisters and brothers are young adults who model the outcomes hoped for by the broader community of faith,” Kinnaman notes. “By getting to know the resilient disciples, we can find out what formation experiences and relationships are most effective for growing resilient faith in exile.”

Read more from David Kinnaman about researching faith that lasts.

Photo by Matt Botsford from Unsplash

Research in this article comes from Faith for Exiles. Order your copy today!

What Will It Take to Disciple the Next Generation?

Over the last decade and a half, one of Barna’s primary missions has been to understand emerging generations—specifically Gen Z and Millennials in the United States—and discover how to best equip them to grow and share their faith. In the process, Barna has interviewed nearly 100,000 teens and young adults to learn more about their worldview, especially surrounding Christianity, religion and culture. As Barna deepens our understanding of the next generation and what they’re bringing with them into adulthood, we are also reflecting on some of the many conversations we’ve had with faith leaders about the bigger questions surrounding the next generation.