Does School Violence Begin in the Home?

This article is part of Barna’s back-to-school series exploring brand new research on education, from parents’ expectations and college trends to students’ schedules and school violence.

From Columbine to Sandy Hook, when tragedies like school shootings occur, they tend to dominate media coverage. Shootings like these, however, are among the more rare and unusual forms of school violence. These horrific events are simply the worst expression of violent behavior and crime that occurs on campuses across the country. But why is there so much violence in our sanctuaries of learning? In a recent Barna survey, in partnership with MJM Entertainment Group, American adults were asked their opinion on a question that keeps parents and teachers up at night: What factors can lead to violence in America’s schools?

Most American adults believe family dysfunction has the most formative impact on a young person’s propensity to violence. Difficult family situations such as divorce, single parenting or absent parents (51%) are the most often cited factors believed to contribute to school violence. People believe another key factor is undiagnosed or untreated mental illness (43%), followed closely by easy access to guns (40%), a reason cited by two-fifths of American adults. Each of the top three reasons combined indicate a noteworthy mix of concerns related to both means and motive.

Most believe family dysfunction has the most impact on a young person’s propensity to violence. Click To Tweet

Following the three most common responses are those related specifically to media. More than one-quarter (27%) believe violence in video games motivates violence in real life. To a lesser extent, they also believe violence on television plays a critical role (22%). Violence in film and movies (15%) or in music (14%) are lower on the list. Moving away from media, one-fifth of American adults (20%) believe a lack of religion in school (e.g. prayer, religious instruction / education) contributes to the reality of violence. And finally, only a handful (7%) believe a lack of armed guards in schools is an issue. 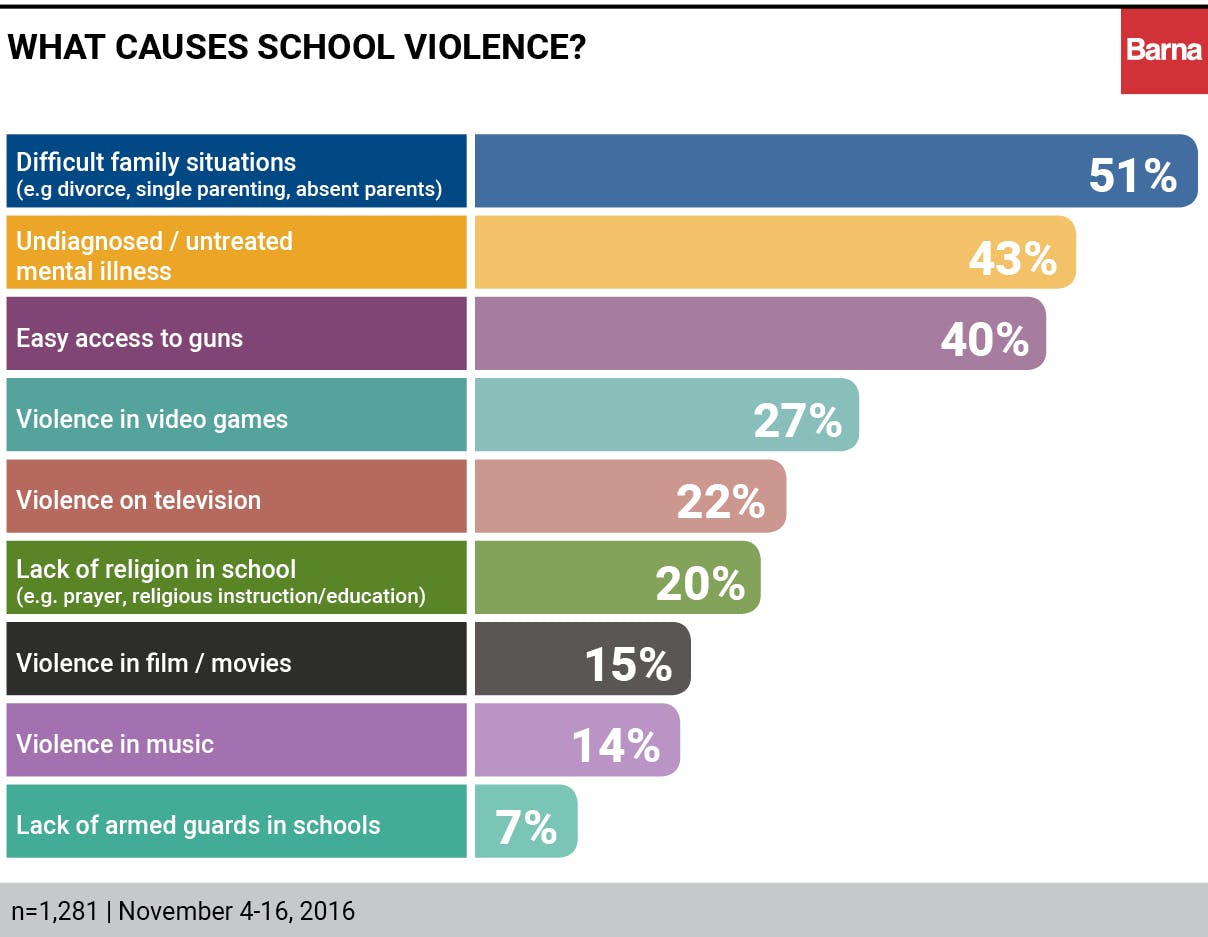 The three main catalysts for violence cited among American adults—difficult family situations, untreated mental illness and easy access to guns—were identified consistently across different faith segments, with the exception of evangelicals. While the most common factor chosen among evangelicals pertains to problems at home (63%), they also believe “lack of religion in school” (58%) is a major contributing factor leading to violence, and are much more likely to say this than any other group surveyed, including practicing Christians (34%). According to them, the absence or decline of a religious influence is twice as likely to lead to violence than factors like mental illness (34%) and gun accessibility (26%). 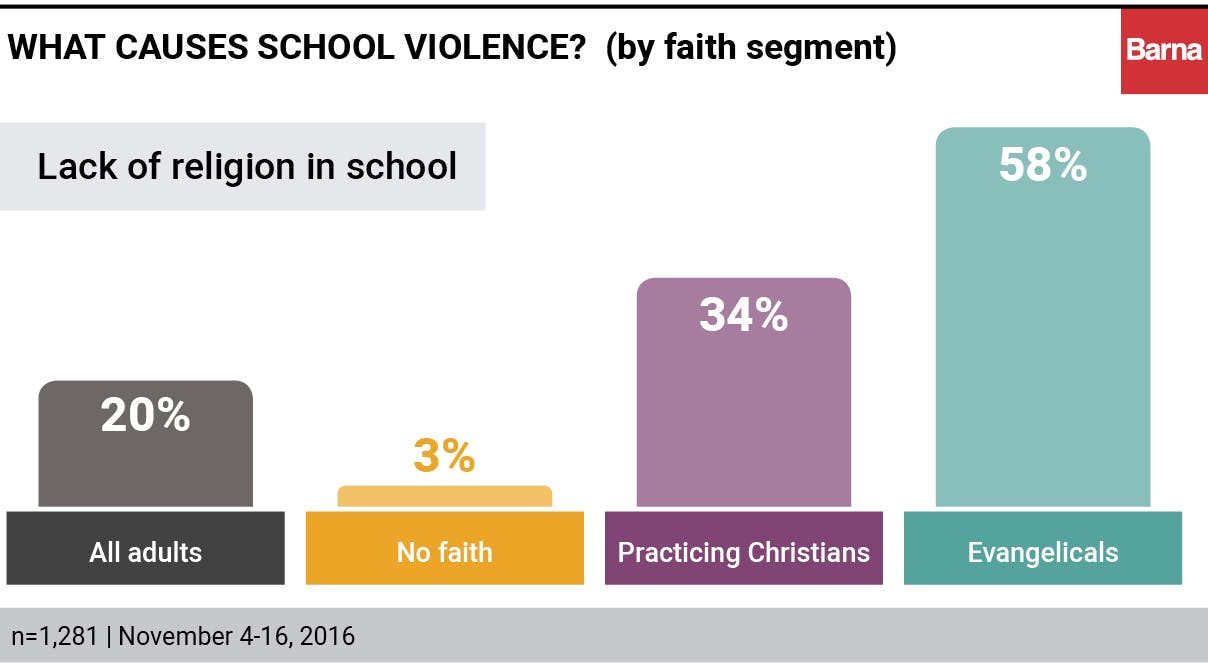 Older generations are more likely to view violent video games or TV as causes of school violence. Click To Tweet 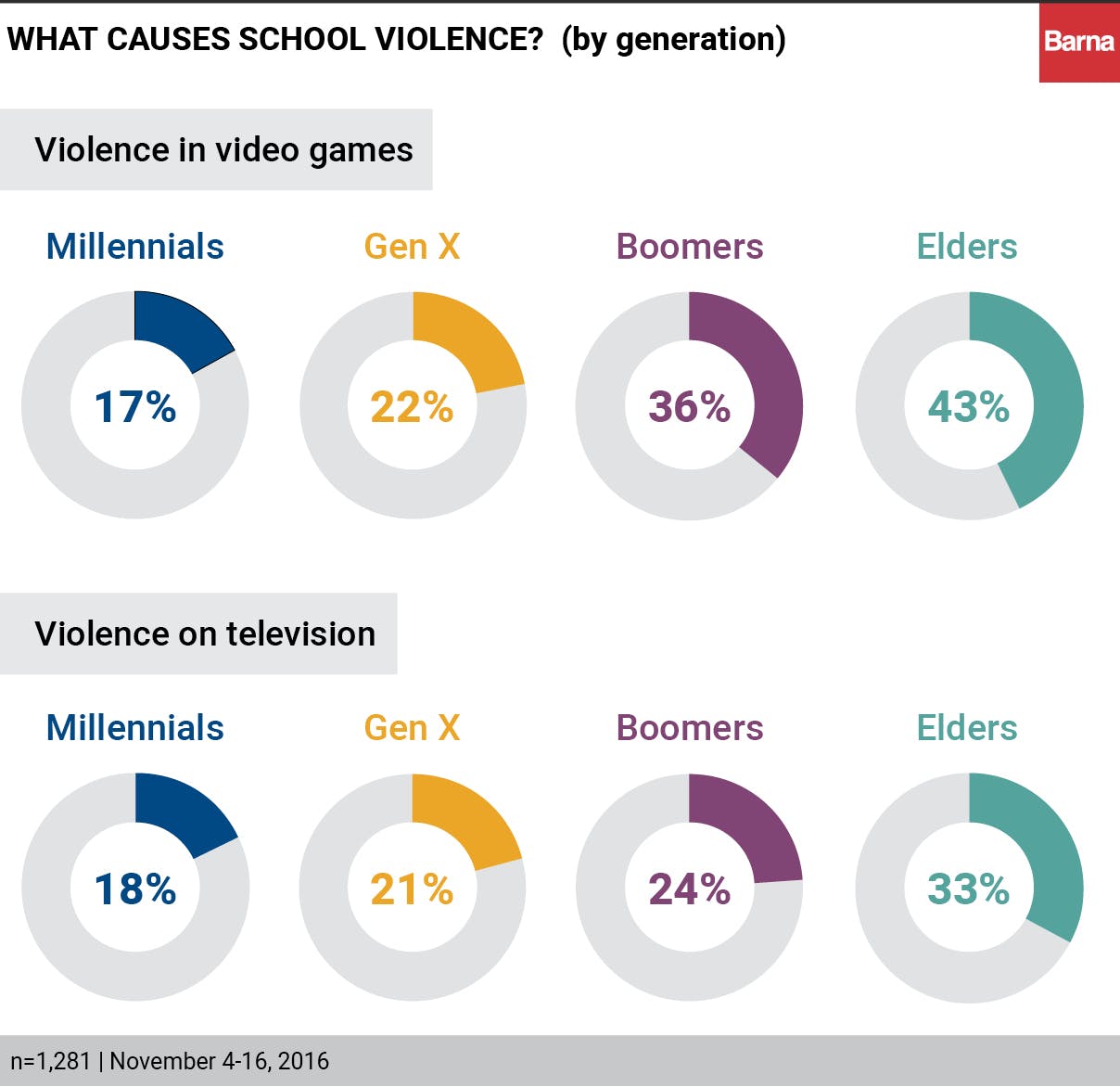 What’s Next for Biblical Higher Education

Race and ethnicity also play a key role in how individuals rank the primary reasons for school violence. For example, black adults say that access to guns (54%) or neglected mental health (48%) contribute to school violence more than trouble at home (40%). Hispanics and Asians are less convinced that untreated mental illness plays a role in school violence (34% and 29%, respectively). Asians, however, are most likely to believe a lack of armed school guards contributes to violence (18%, compared to the average of 7%). 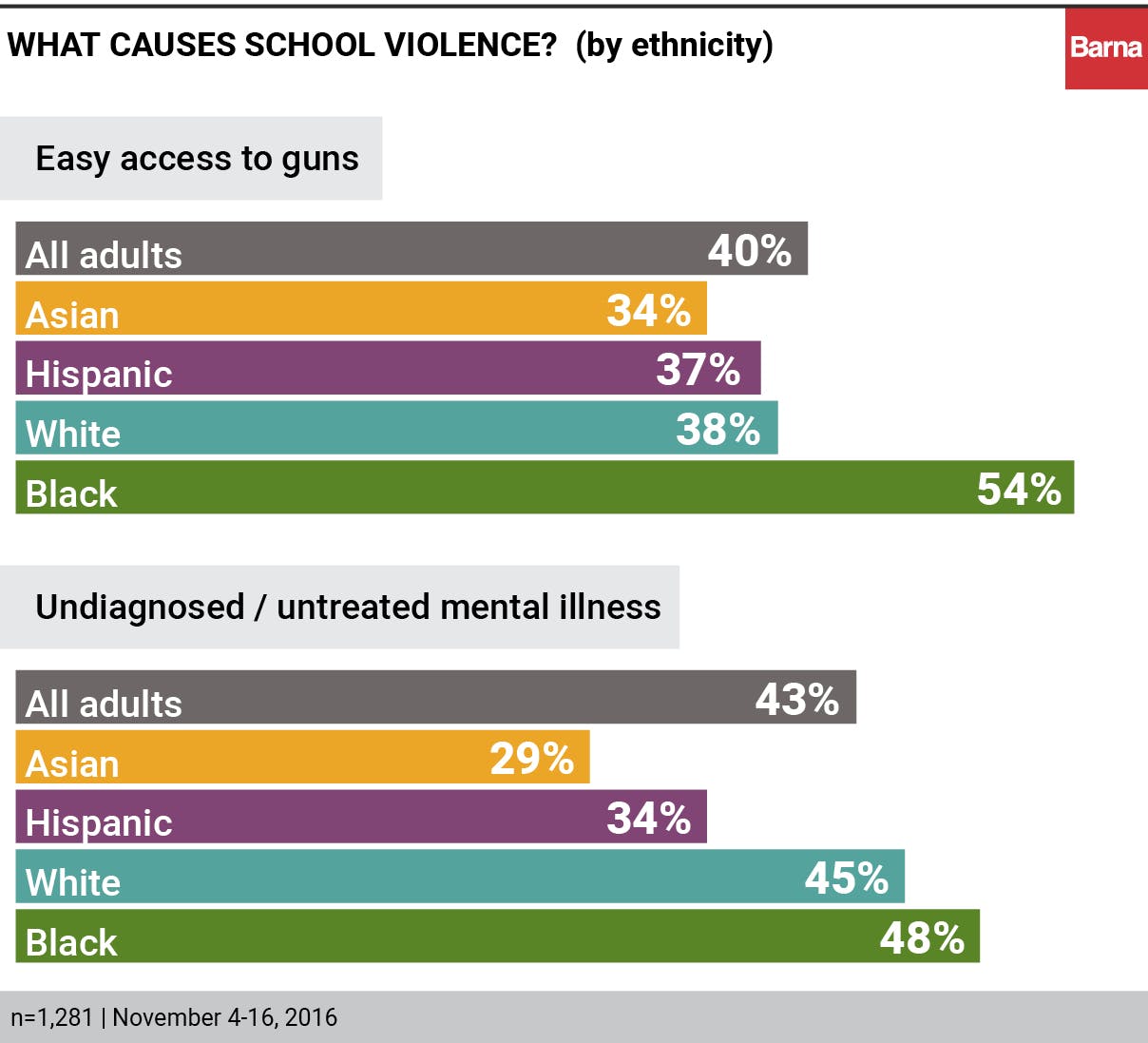 Republicans are more likely than Democrats to blame school violence on lack of religion in school. Click To Tweet 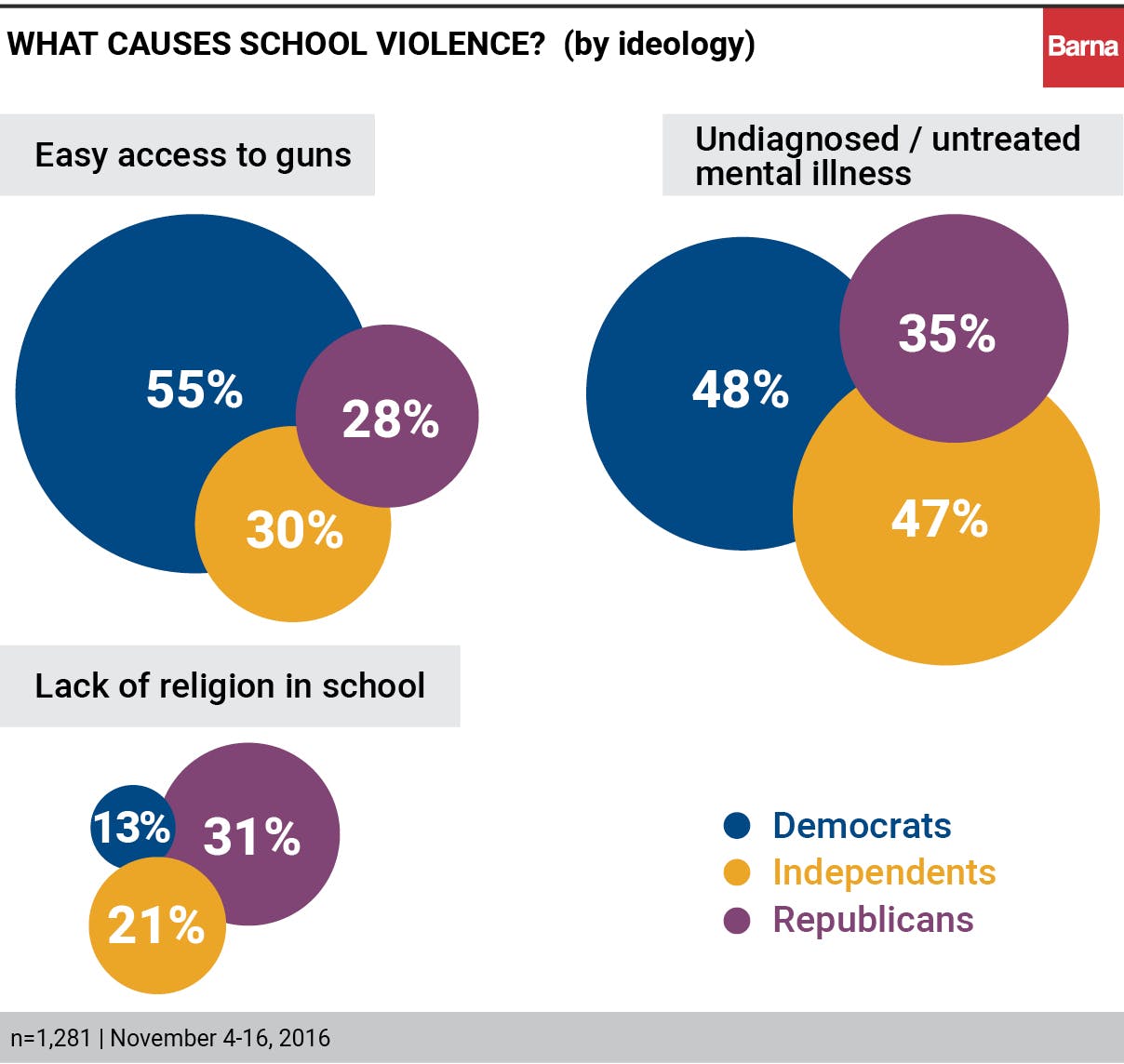 About the Research
Interviews with U.S. adults included 1281 web-based surveys conducted among a representative sample of adults over the age of 18 in each of the 50 United States. The survey was conducted November 4-16 of 2016. The sampling error for this study is plus or minus 3 percentage points, at the 95% confidence level. Minimal statistical weighting was used to calibrate the sample to known population percentages in relation to demographic variables.

Photo by Alaric Hartsock on Unsplash

Sexual norms have changed dramatically over the years, and young people are often left to their own devices (sometimes literally) when it comes to navigating sexuality. A new Barna study uncovers how Americans see their responsibility to educate and equip teens to make choices about sex.