Behind the Numbers: How We Conducted a Global Study of Young Adults

This fall marks the launch of The Connected Generation project, a Barna Group-World Vision partnership offering an unprecedented look at the faith and well-being of young adults today. In both scope and content, this first-of-its-kind study holds a unique place in Barna’s 30+ years of research. Let’s go behind the scenes to learn how we’ve been able to dramatically widen—and focus—the lens with which we view young adults around the world.

So, How Big Is This Study?
This project involved not only a large and international sample but also an extensive and highly collaborative survey design process. As partners in this research, World Vision staff in 20 countries aided with early input on the study formation, coordination of thought leaders and local contextualization. Here’s a peek at the numbers behind the data and how this portrait of the connected generation came to be. 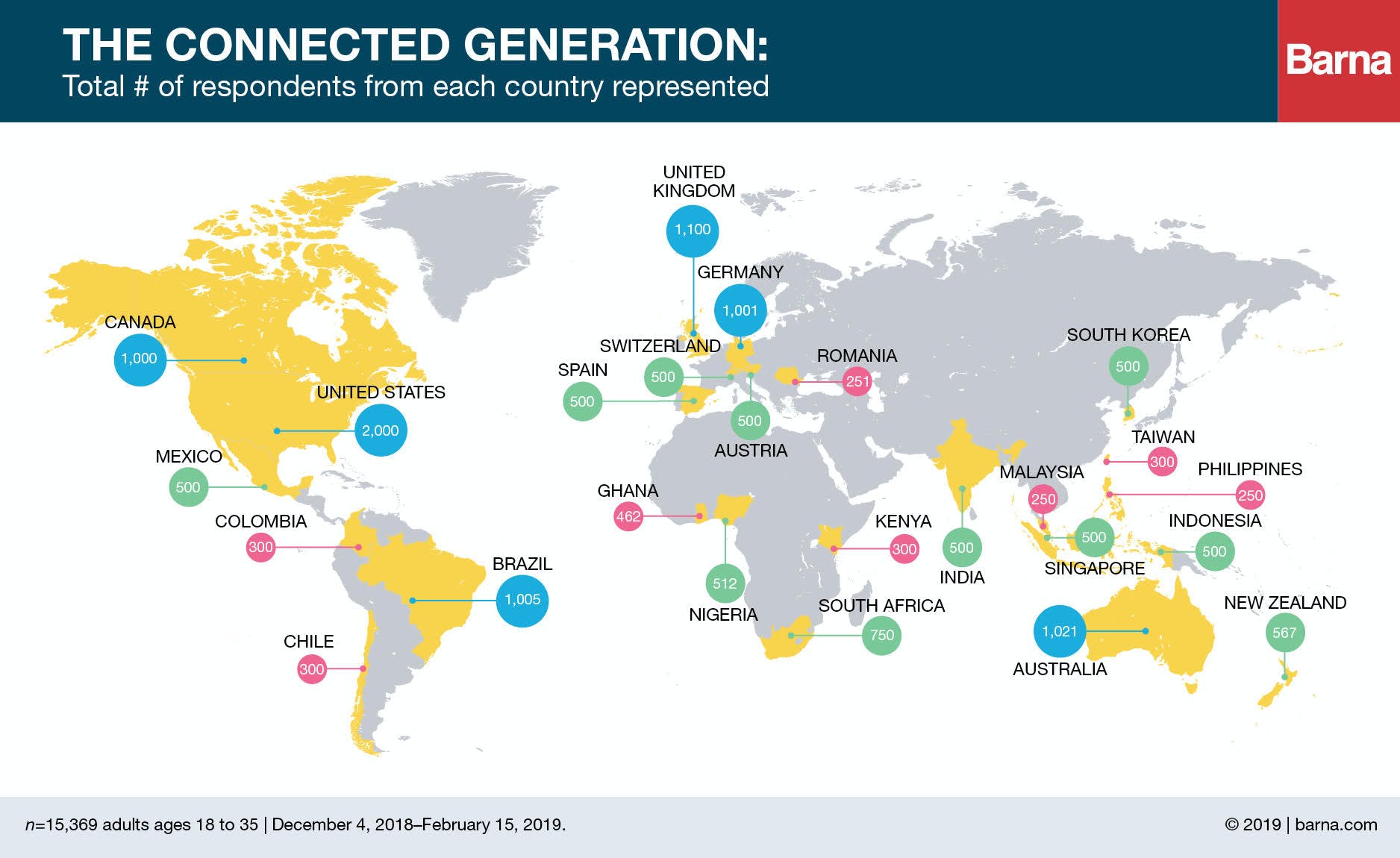 Who Are We Listening To?
It’s important to acknowledge exactly who this study represents: respondents ages 18 to 35, from 25 different countries, who have an internet connection that allows them to participate in online surveys. The methodological obstacles make it difficult to conduct a study that is truly “global.” This international sample, rather, includes a more literate, educated and urban population than would be wholly representative of all of these countries. This is important context to keep in mind, as even a study as extensive as this one has its limitations.

So how to refer to these 18–35-year-olds across The Connected Generation report and resources? Adults in this age range are sometimes called Generation Y, Echo Boomers, iGen, Digital Natives and so on. Barna has chosen to use a variety of other terms for them in these pages. First, for clarity, they are often referred to as 18–35-year-olds from around the world. This age group also bridges the generations Barna would typically cover as Millennials and Gen Z, labels you’ll see occasionally in this report. The respondents may sometimes be referred to as emerging generations, this generation or young adults, the last of which we use to mean those on the lower end of the adult generations, not adolescents to whom this term is sometimes applied. Finally, for reasons made clear in the findings, we also proffer our own term: the connected generation.

What Did We Learn?
Looking at the general state of faith & well-being among 18–35-year-olds around the world, these are the stories that stand out.

Despite being a hyper-connected and globally minded generation, many young adults say they feel lonely.

There is a general (and, at times, surprising) openness toward spirituality, religion and, in many cases, the Church—but less so among those who have left their faith.

Worry and insecurity, often tied to finances and vocation, are prominent traits among a generation that has come of age in a chaotic, complex time.

Human suffering and global conflict are among the top issues that raise spiritual doubts for 18–35-year-olds.

Across religious climates, the data point to keys for forming faithful Christ-followers, even among those Christians who lapse in religiosity.

When young adults engage with a community of worship, they’re looking for concrete teaching, opportunities to fight injustice and friends to join them along the way. Leaders from Barna and World Vision introduced some of the major global findings through Faith for the Future, a live webcast in September 2019—we’ve already heard from pastors and leaders making use of this data in their context. The centerpiece of this project is The Connected Generation: How Christian Leaders Around the World Can Strengthen Faith & Well-Being Among 18–35-Year-Olds, a comprehensive summary of those findings launching in October 2019. You can also engage with country-specific reports and field guides, which will be rolled out over the next year on TheConnectedGeneration.com. Church and Ministry in a Post-Christian Culture

Scotland is a fascinating case study that provides useful insights into how to do ministry and be the church in a rapidly secularizing context.