In recent decades, there has been a widely acknowledged global trend of less and less extreme poverty: According to World Bank standards, 1.1 billion people have been lifted out of extreme poverty since 1990. The title of Barna’s new report, produced in partnership with Compassion International, refers chiefly to this encouraging fact. But The Good News About Global Poverty, based on surveys of the U.S. public and pastors, also points to the power of empathy and optimism in facilitating justice for the poor. If the recorded decline in worldwide poverty is not yet cause for celebration, it’s at least reason to hope and—following the lead of the Church in the developing world—incentive to continue chipping away at poverty and its effects.

Let’s look at some other indications of mounting momentum and optimism in the fight against extreme global poverty, particularly within the Church. (You can read more about the mindsets that motivate donors in this column from analyst Susan Mettes.) 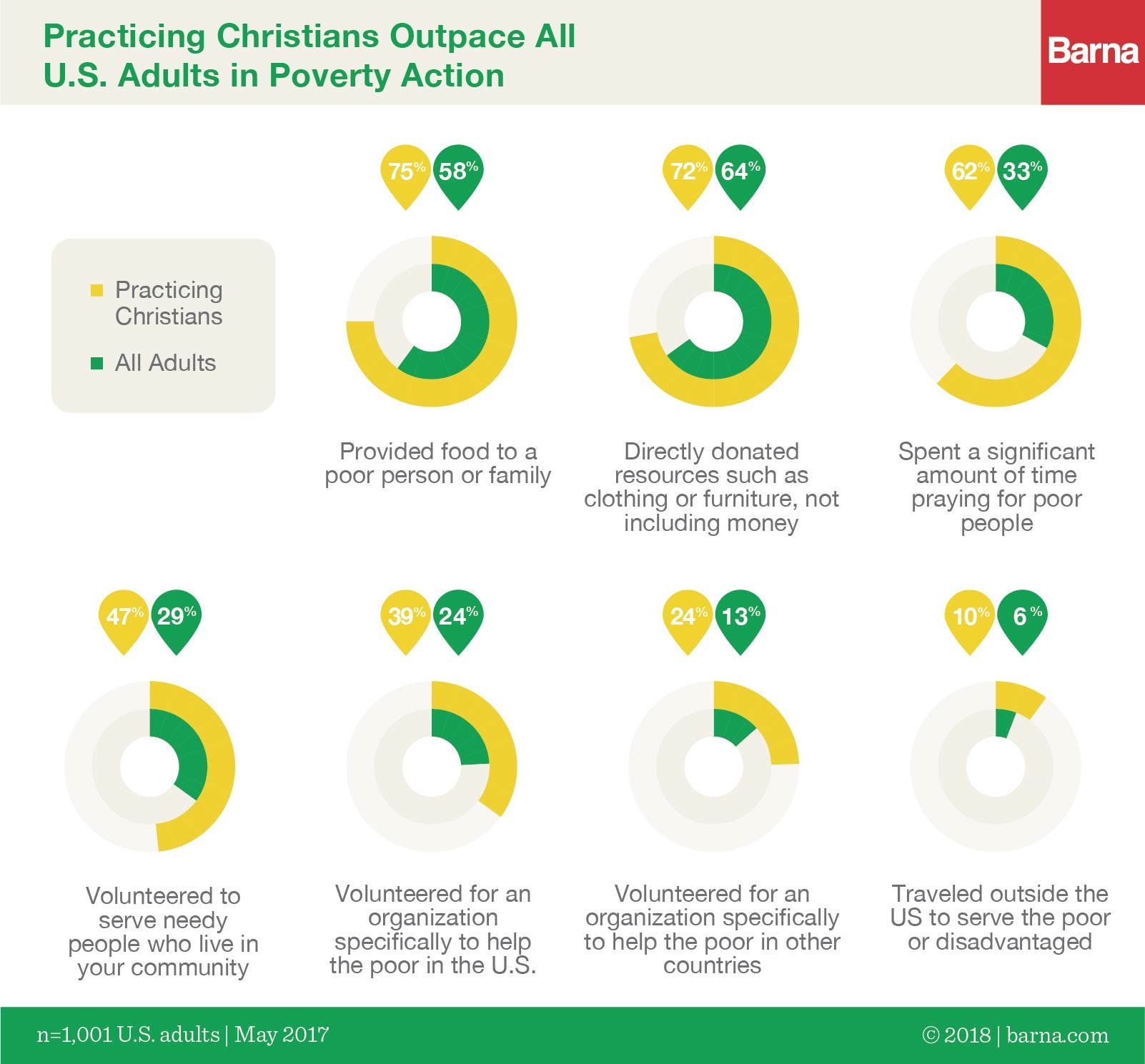 Practicing Christians outpace all U.S. adults in participation in a variety of actions to help the poor, in the U.S. and abroad. Click To Tweet

One central feature of this new study is an introduction to the Poverty Action Types, Barna’s custom segmentations based on individuals’ theory and practice of poverty engagement. Occasionally, people exhibit both a consistent emotional and practical response to poverty—a group Barna refers to as Responsive Supporters, who make up a quarter of respondents (24%). These compassionate adults, more often of the Gen X and Millennial generations, also appear to be compelled by religious conviction; two-thirds of Responsive Supporters (67%) are Christians, and 43 percent are practicing Christians, the highest number among the types. They are the most active church attenders (68% have been to church in the past month). A majority of these Responsive Christians believes that helping the poor in turn helps Christians understand the heart of Christ (58%) and has spent significant time praying for the poor (53%). Forty-four percent of Responsive Christians say that their churches should prioritize spending resources to address poverty in other countries. Christians in this group are also the most eager for information on poverty; eight in 10 are at least somewhat interested in learning more about a biblical perspective on poverty (79%) or hearing about how the Church could be involved (80%). 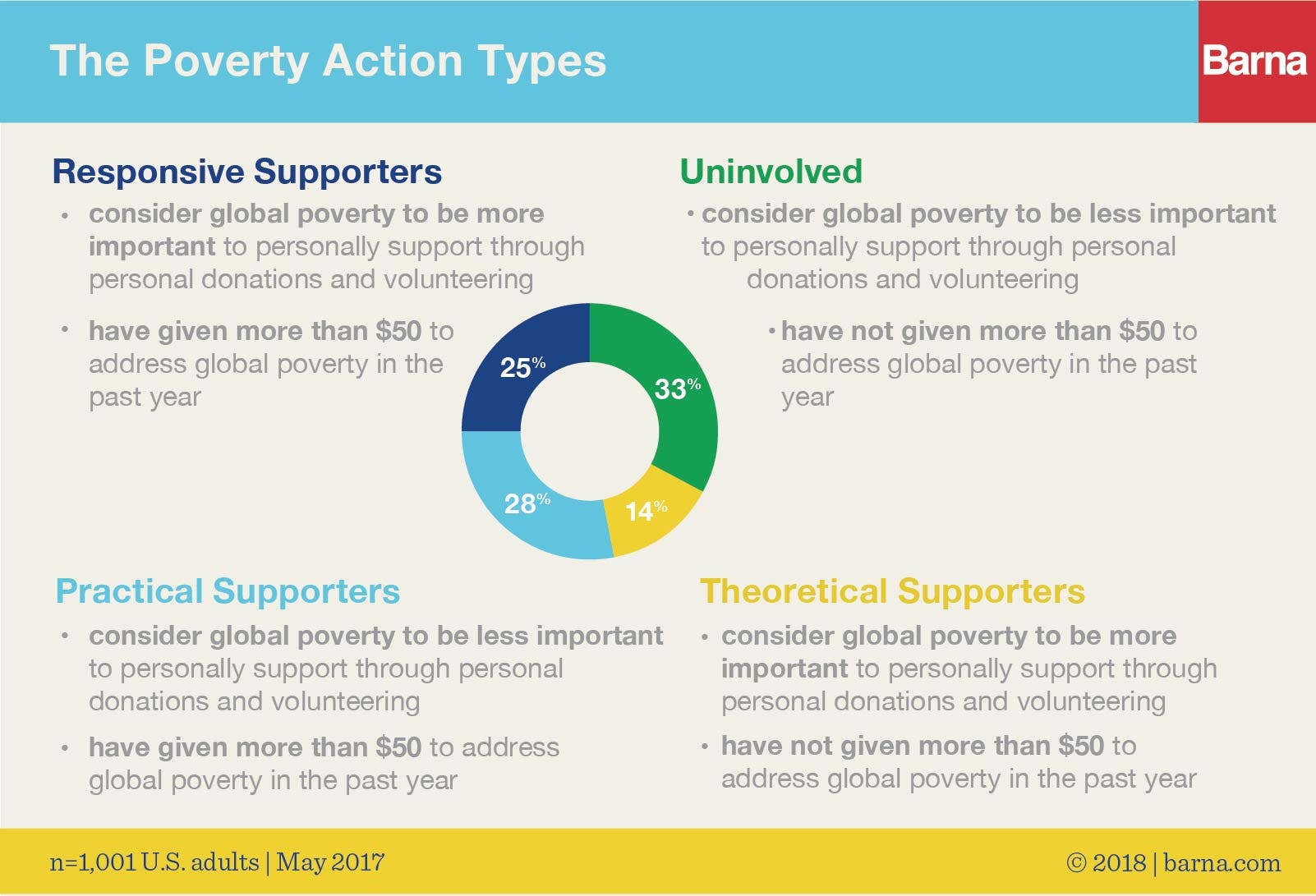 Global and Local Poverty Don’t Have to Compete for Attention
When forced to choose among hypothetical options for giving, the majority of U.S. adults says they would prefer designating donations for local child poverty. A higher proportion in 2017 than in 2003 (23% vs. 7%) says the location of the children being helped “wouldn’t matter” to them. Presumably, this group is open to guidance about where an imaginary $100 should go. This change may be related to the reduced proportion who would give to overseas child poverty (8% vs. 15% in 2003) or to U.S. poverty (64% vs. 74% in 2003). 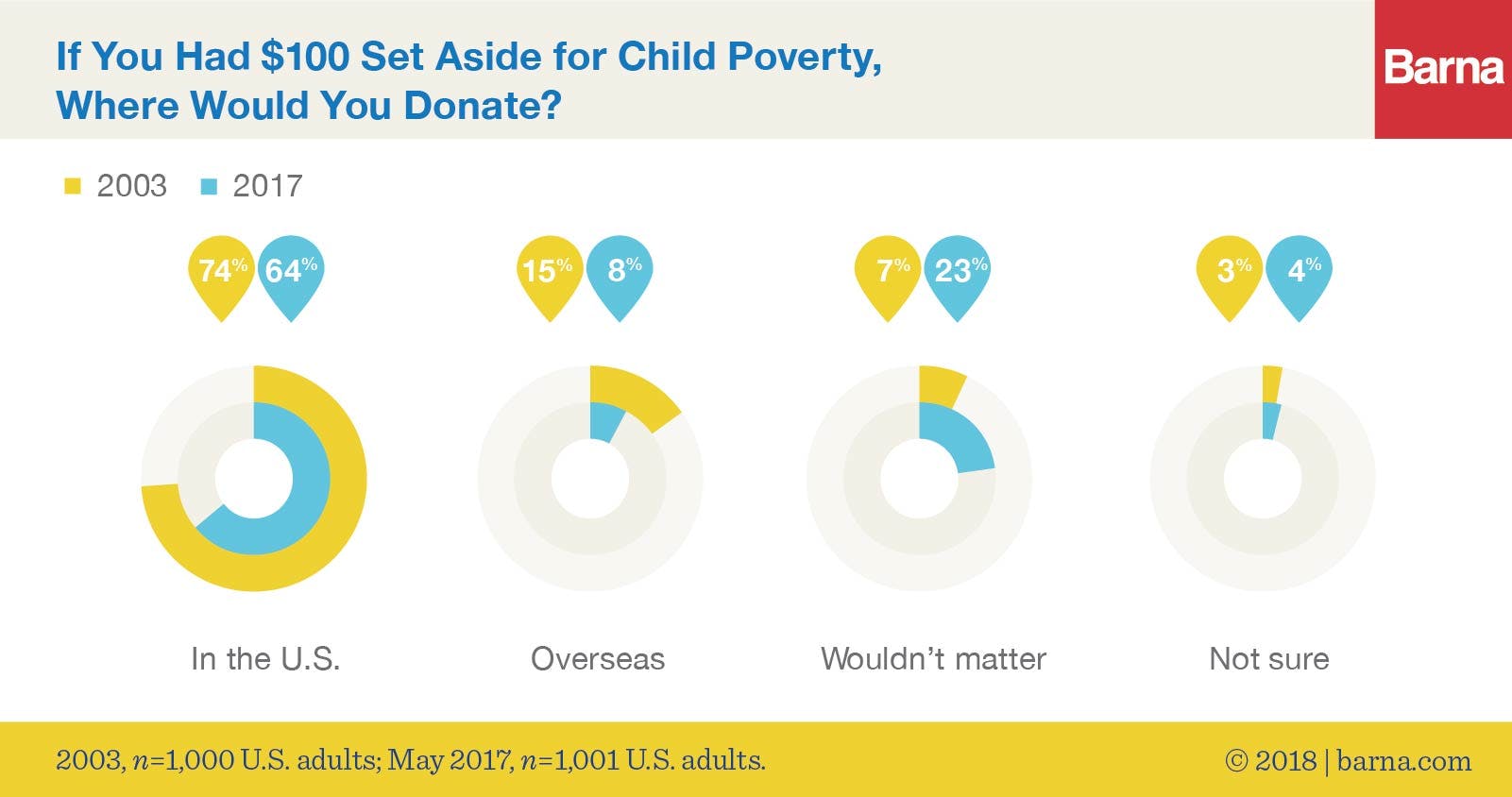 Those who say personal action on global poverty is more important are also likely to see every other social issue Barna asked about as important. Click To Tweet

But beyond this hypothetical survey scenario, nothing seems to keep U.S. adults from giving to multiple issues, or to the same issue in multiple locations. Survey results show in a few dimensions that practicing Christians particularly do not see fighting poverty as a zero-sum game, where either American or overseas children must lose. In other words, there does not seem to be a tradeoff between interest in global poverty and in local poverty: Those who rank global poverty as a priority are more likely to also prioritize local poverty (92%) than those who don’t see global poverty as important (74%). In fact, those who say personal action on global poverty is more important are also likely to see every other social issue Barna asked about as important—and their actions in giving and service often follow suit. Interest and investment in the fight against global poverty correlate with a generous outlook toward many social issues. This is another central theme of the good news shared in Barna’s new study: the more you care, the more you care. 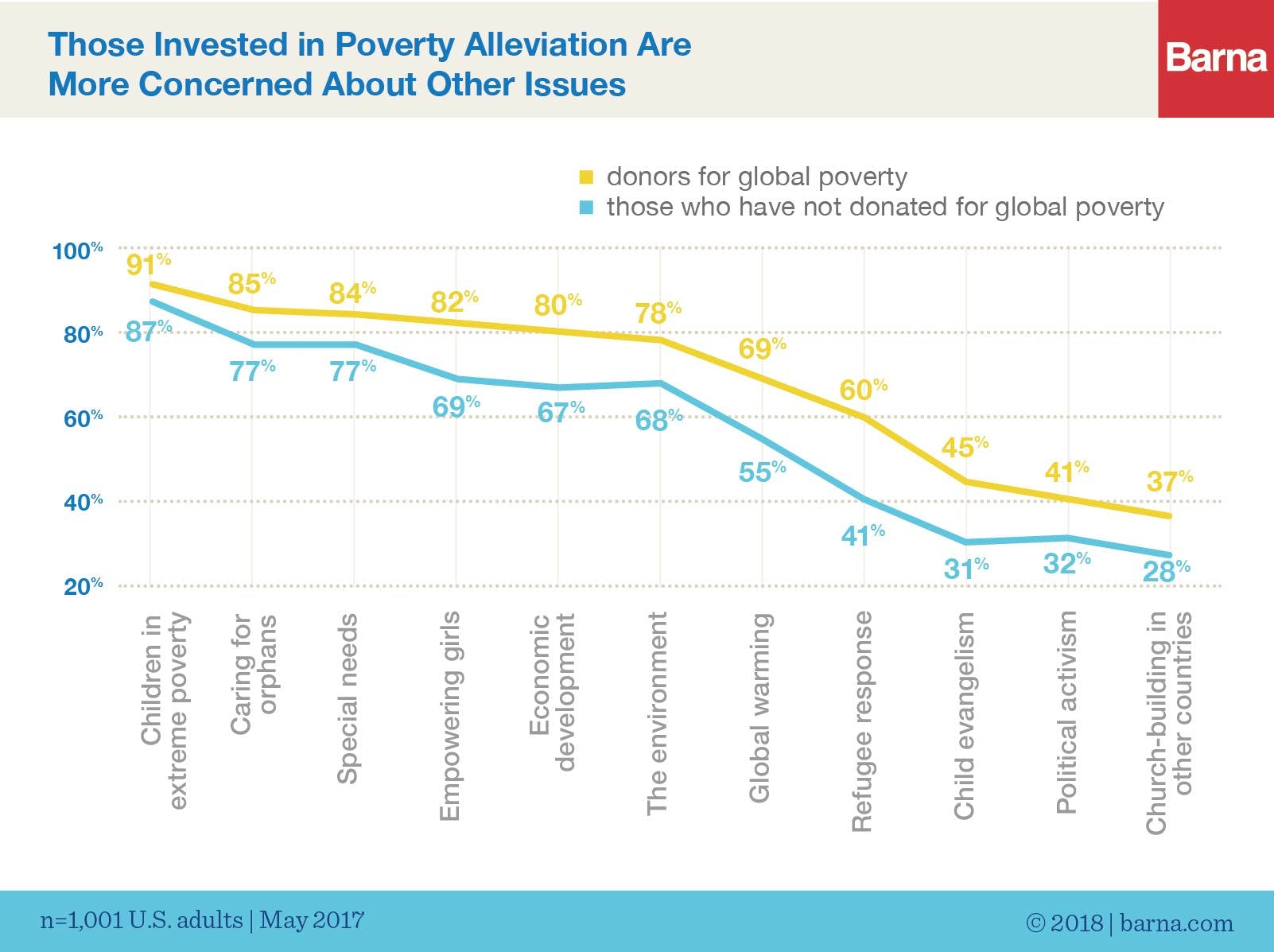 Hope in and Proof of Personal Impact Matters
Barna observes that people who are hopeful that they can make a difference in poverty alleviation are those more willing to try. A majority of U.S. adults (57%)— 11 percentage points more than in 2011—says that knowing it is possible to end extreme global poverty would make them do significantly more to help bring that about. Among practicing Christians, the percentage climbs to 62 percent.

For most people, any evidence of one’s financial impact would encourage them to give more. This is very true of Millennials (62%, compared to 32% of older generations), an age group that places a high value on information and transparency. This “show your work” approach could be particularly helpful in retaining a majority of non-white Americans (57%) as donors (compared to 38% of white Americans).

Overall, most U.S. adults and Christians, if they have some assurance that they could have an impact, would be willing to play their part in combating poverty and its ills—another testament to the animating effect of optimism and confidence.

People who are hopeful that they can make a difference in poverty alleviation are those more willing to try. Click To Tweet

What the Research Means:
“As a spiritual leader, how can you use this research to guide your efforts to serve the poor? How can you use what you’ve learned here to inspire greater engagement in the people you lead?” Roxanne Stone, editor in chief of Barna, asks. Here are a few of her suggestions:

“The more people are able to feel personally connected to the work you are doing, the more apt they are to stay engaged. Tell stories of the people you are working with; share how your efforts are making a difference; let people from your congregation share their own experiences in serving the poor. Consider choosing one cause and / or ministry a month to highlight, with a few words on this partnership or project every week from the pulpit.”

Stone also recommends celebrating successes. “Hope is a powerful motivator in the poverty fight. Optimism about ending poverty and about one’s role in that effort are connected to engagement. When people believe what they are doing is actually making a difference, they are encouraged and maintain interest. Make time to cheer for the good work your church is doing and for the tangible effects you are having.

“Practicing Christians are the most engaged segment of the population when it comes to fighting poverty,” Stone continues. “Local churches are already doing many things right in discipling Christians toward compassion for the poor. But there is more to do: Fighting poverty—both material and spiritual—will always be the mission of the Church. We pray this report—both the data and the stories—will be an encouragement and a spark as you press into this mission.”

About the Research
The data in this report originated from a series of research studies conducted by Barna Group of Ventura, California.

Phone interviews and web-based surveys for U.S. Adults were conducted among a representative sample of adults over the age of 18 in each of the 50 United States. Once data was collected, minimal statistical weights were applied to several demographic variables to more closely correspond to known national averages. Protestant senior pastors were recruited from publicly available church listings covering 90 percent of U.S. churches. Data were minimally weighted to match church characteristics from the National Congregation Study for denominational affiliation, church size and region.

Talk about “self-care” has entered the mainstream as many seek out ways to unplug or pursue personal health through nature, journaling, solitude and more. To see how spiritual Americans are being mindful of their well-being, Barna asked them to identify their regular self-care practices.