Parents today believe it is harder than ever to raise children. The number-one reason? Technology.

That’s a key finding at the heart of The Tech-Wise Family: Everyday Steps for Putting Technology in Its Proper Place, a new book by Andy Crouch. Two years ago, as we dreamed of partners for upcoming book and research projects, Crouch was at the top of our list. Crouch—a leading cultural commentator, one-of-a-kind speaker, senior communication strategist at John Templeton Foundation and former executive editor of Christianity Today—shares a different side of himself in this book: a dad who, alongside his wife, Catherine, has learned firsthand the challenges and rewards of engaging with technology intentionally (or sparingly) as a family. This book combines Crouch’s clear and incisive thinking with original Barna research among parents, who are feeling the tensions of parenting in a digital age.

In this sneak peek of The Tech-Wise Family, we look at some of the top revelations about how parents and kids relate to their devices and to each other.

Monitoring Technology Makes Parenting Even More Difficult
It’s a complex, rapidly changing world, and parents today are feeling it. Nearly eight in 10 parents (78%) believe that they have a more complicated job in raising their kids today than their parents did raising them. Technology is the number one reason parents believe it is harder than ever to raise children. Beyond that, parents seem to most often identify issues that feel beyond their control and that are global in scope: a more dangerous world or a lack of a common morality. The consequences of these difficulties feel dire and so, perhaps, scare parents more than local or personal factors such as finances, bullying at school or high academic pressures. 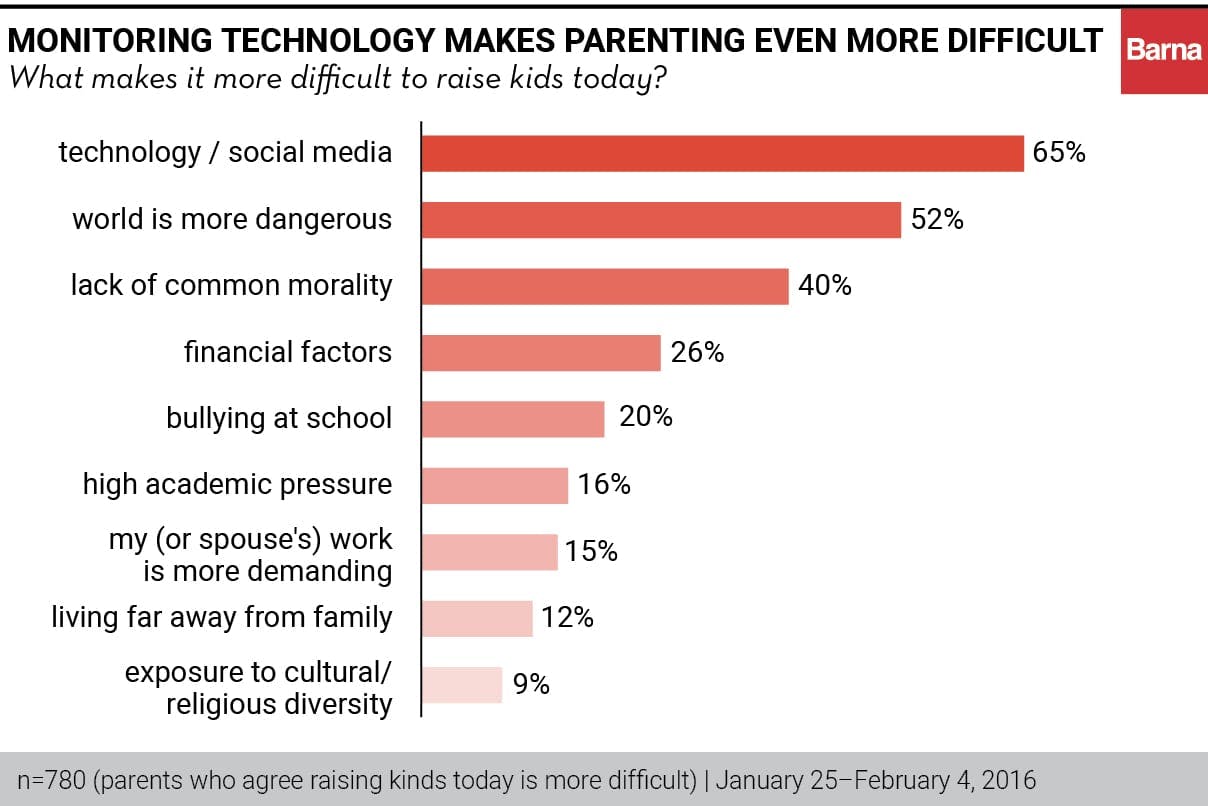 Life Truly Happens in the Living Room
Most families do almost everything together in their family or living room. Two-thirds of parents (65%) say they spend the most time as a family in this space, with the kitchen coming in as the preferred second space. Entertainment, leisure and creativity all overlap in this space—likely contributing to a presence of technology within all of these activities. Families are most often participating in leisure or entertainment activities in the family room (79%), but it’s also the place where families say their creative activities happen (51%). 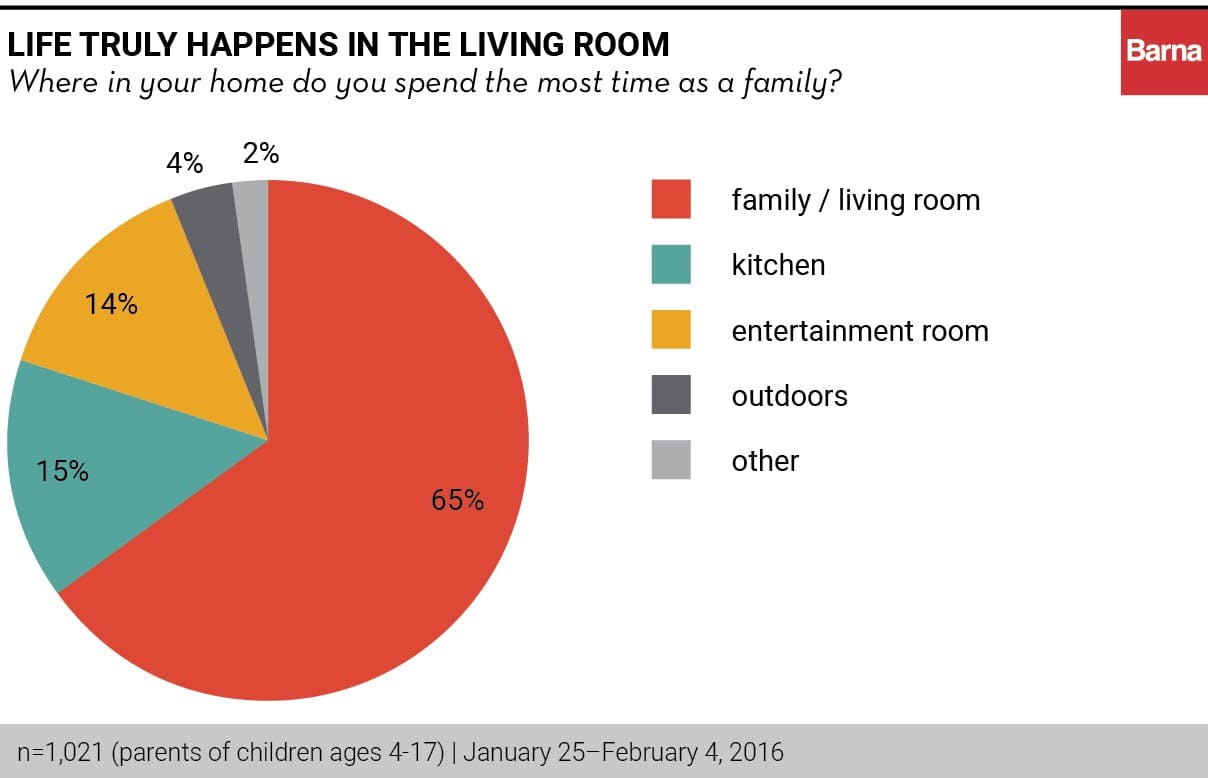 “Now I Lay Me Down to Sleep … with My Smartphone”
When they do go to bed, most people take their phones with them. A full seven in 10 parents say they sleep with their phone next to them. Alarmingly, parents say their kids are even more likely to take their phones to bed: More than eight in 10 parents of teens (82%) say their child takes their phone to bed and more than seven in ten parents of preteens (72%) say the same. And when that phone is right next to you, it’s tempting to reach for it when you wake up: 62 percent of parents say checking their phone is the first thing they do in the morning. What are they doing on their phone while they rub away the cobwebs of sleep? Most check their email (74%). Social media (48%), news (36%) and calendar organization (24%) also vie for their attention. Less than one in five (17%) are using a Bible or devotional app.

A full seven in 10 parents say they sleep with their phone next to them. Click To Tweet 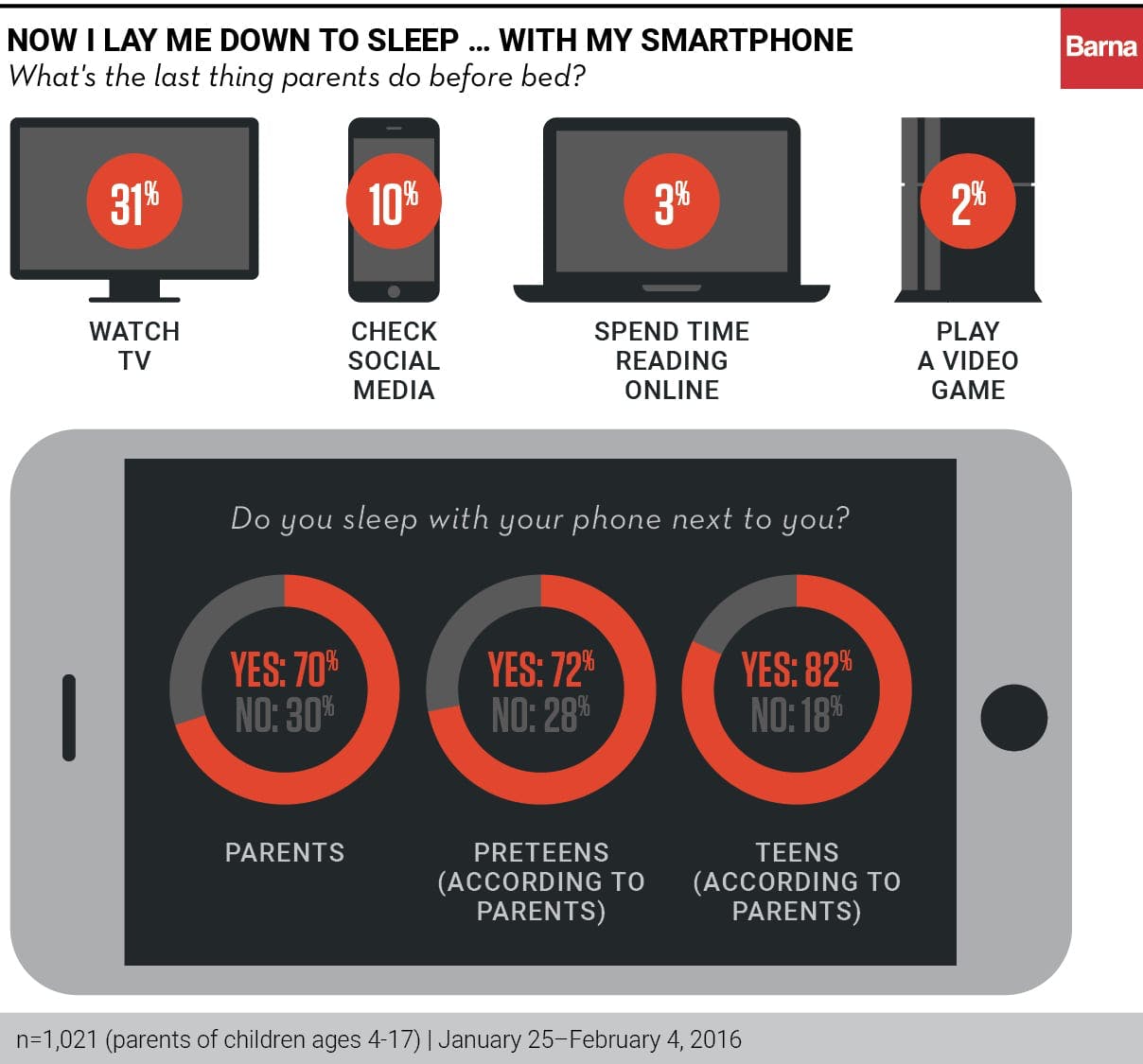 Parents Might Limit Kids’ Device Usage—But Don’t Eliminate It
Children are spending an average of five hours on an electronic device (tablet, phone, computer, etc.) every day. Even at this amount, most parents say they are limiting the amount of time their kids spend on electronic devices (60%). Millennial parents—perhaps because they have younger children or perhaps because they are more likely to be immersed in and therefore experiencing their own angst around electronic usage—are more likely (73%) than Gen-Xer (57%) or Boomer parents (57%) to limit their children’s time on electronic devices. Limiting time seems more popular than eliminating the devices: Most kids have phones. Nearly nine in 10 parents with teenagers (88%) say their teen has a phone and just under half of parents with preteens (48%) say their child does. 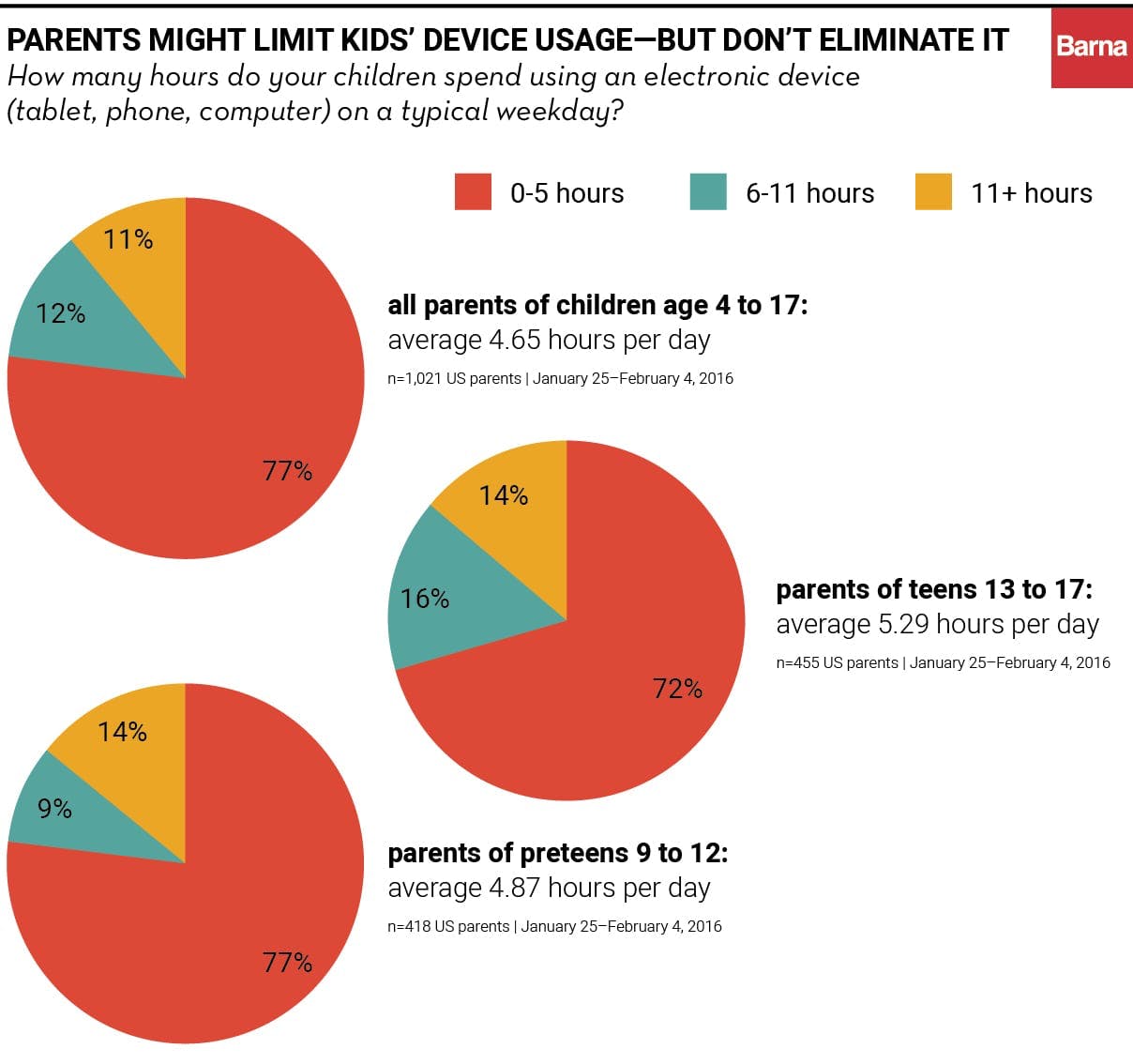 Video Games and Family Time Dominate After School Hours
Aside from television watching, technology occupies a central place in many of the after-school activities of children: Four in 10 parents (42%) say their children regularly play video games after school, three in 10 (27%) are on social media or texting with friends, and a quarter (25%) are online other than for homework. Of course, there’s plenty of offline activity too: Nearly six in 10 (56%) spend time engaging with family members, four in 10 (39%) are playing informally, one-third (32%) are reading other than for homework, a quarter (23%) are playing organized sports, and more than one-fifth (22%) are hanging out with friends.

Parents Say Tech Disrupts the Dinner Table
When it comes to family meal time (which parents, on average, say happens at least six times a week), parents are apt to admit this space has been disrupted by electronic devices: One-quarter (24%) say they strongly agree that electronic devices are a significant disruption to their family meals, with an additional nearly one-fifth (18%) saying they somewhat agree. However, about one-third of parents (32%) say devices are not allowed at the table, and another one in five (22%) say family members rarely bring their devices to the table. Only one in five (19%) say their family members always bring their devices to the table. 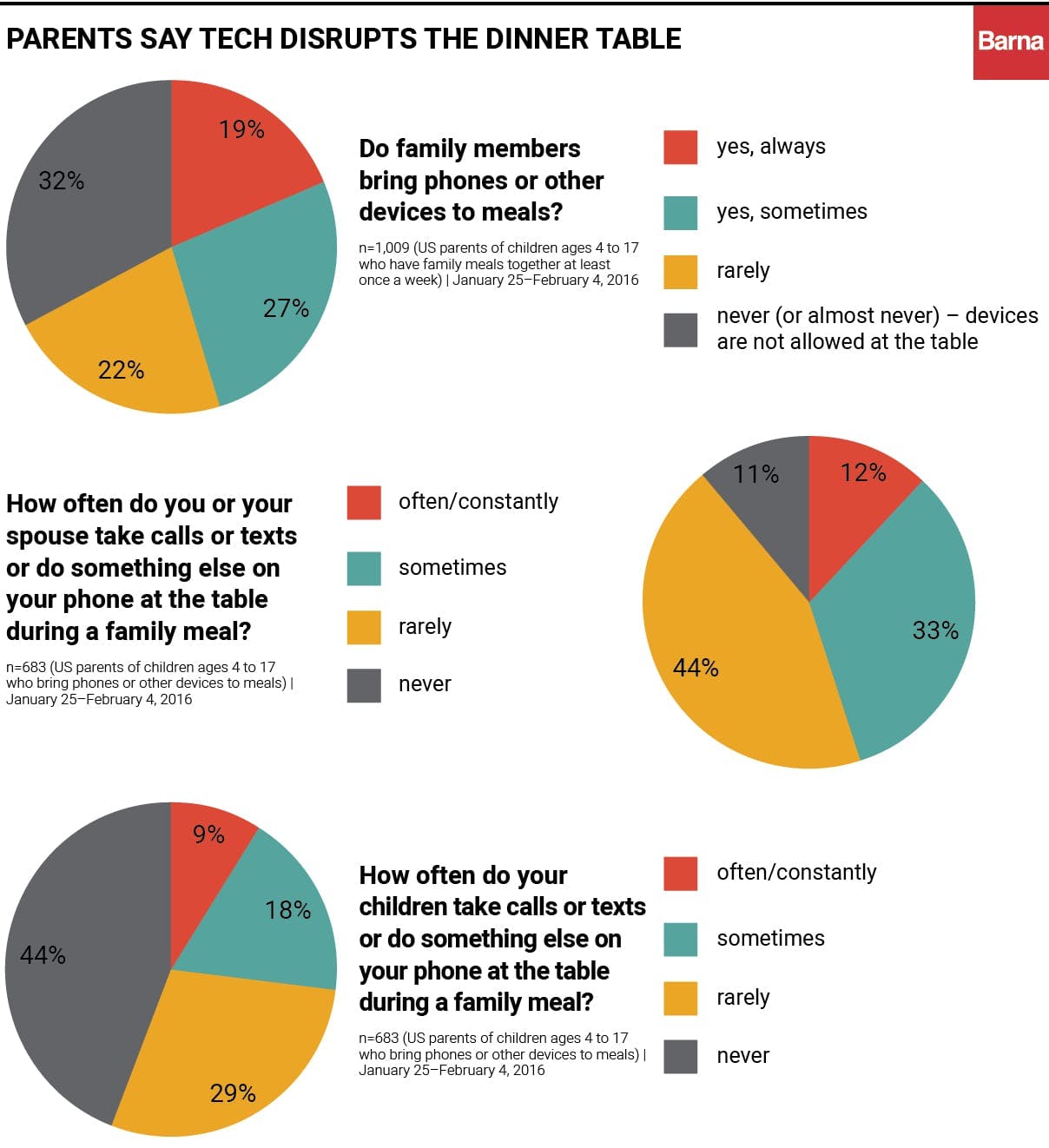 What The Research Means
“Technology is literally everywhere in our homes—not only the devices in our pockets but the invisible electromagnetic waves that flood our homes,” writes Andy Crouch in his new book The Tech-Wise Family, written in partnership with original Barna research. “This change has come about overnight, in the blink of an eye in terms of human history and culture. When previous generations confronted the perplexing challenges of parenting and family life, they could fall back on wisdom, or at least old wives’ tales, that had been handed down for generations. But the pace of technological change has surpassed anyone’s capacity to develop enough wisdom to handle it. We are stuffing our lives with technology’s new promises, with no clear sense of whether technology will help us keep the promises we’ve already made.

“If we don’t learn to put technology, in all its forms, in its proper place, we will miss out on many of the best parts of life in a family,” continues Crouch. “Figuring out the proper place for technology in our particular family and stage of life requires discernment rather than a simple formula. But almost anything is better than letting technology overwhelm us with its default settings, taking over our lives and stunting our growth in the ways that really matter. And I think there are some things that are true at every stage of life:

Technology is in its proper place when it helps us bond with the people we have been given to love. Click To Tweet

Read The Tech-Wise Family for more insight into “the proper place for technology” as well as a series of practical nudges, disciplines, and choices that can help you and your family keep technology in its proper place.

Sign up for 10% off your first order in our online store.

Easter is upon us, and with all the iconography of chocolate eggs and marshmallow bunnies, it's easy to forget that the single most significant Christian holiday is about more than an egg hunt. Has the desacralization of Easter extended to its central figure? To answer that question, we took a closer look at how U.S. adults see and relate to Jesus in a new infographic.