Americans Soften on Immigration in 2017

Over the past year, immigration has been a front-and-center issue in the United States. In addition to ongoing coverage of the refugee crisis, headlines and social media discussion have swirled around President Trump’s plans to build a southern border wall, halt travel from Muslim-majority nations and repeal DACA (The Deferred Action for Childhood Arrivals). Further, Barna found that his campaign trail comments about immigrants from Mexico had a significant impact on voters, more so than other election stories.

Barna was curious if these policies and continued emphasis on the plight of refugees might have affected Americans’ opinions on this oft-debated topic. New 2017 data, some of which follows up on questions asked in 2016, reveals that the public sentiment toward immigrants and refugees is generally warm—and, on several points, has shifted radically toward a softer view over the course of the year.

2017 began with Trump’s initial and controversial executive order to temporarily ban individuals from certain Muslim-majority nations from entering the U.S.—a proposal half of American adults (49%) do not support. More than one-third (36%) agree with this decision, while a small 15 percent don’t know where they stand. White Americans (47%) are much more likely than Hispanic (18%), black (7%) or Asian (19%) Americans to agree with the order. Republicans (72%) agree more than Democrats (16%) and evangelicals (60%) agree more than those with “other” faiths (16%), a category that includes Islam. 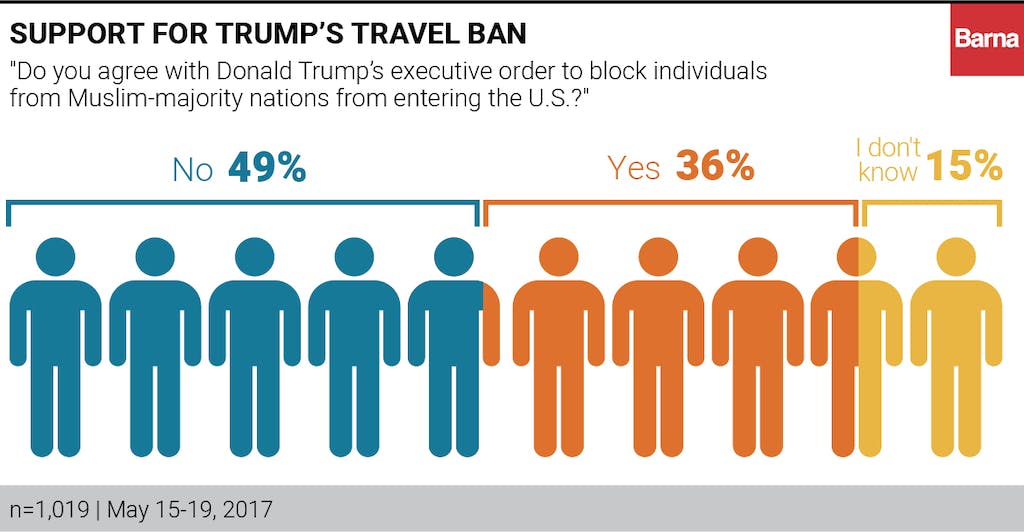 According to Trump—and made clear by the title of the order—its intended purpose is “Protecting the Nation from Foreign Terrorist Entry into the United States.” Trump’s focus on Muslim-majority nations in this executive order is based on the belief that Muslims perpetrate the majority of terrorism. But the American public is not entirely convinced—and appears to be shifting away from such beliefs. Before the election, in 2016, 16 percent of Americans strongly disagreed that Muslims perpetrated the majority of terrorism (an additional 19% somewhat disagreed). Yet, just one year later, an increasing number of Americans are less apt to suspect Muslims: one-quarter (25%) now disagrees that Muslims are responsible for most acts of terrorism (an additional 20% somewhat disagreed, staying steady from 2016). The vast majority of the shift occurred among those who were previously unsure (21% in 2016, now 11% in 2017). Among those who strongly or somewhat agreed, the changes were not significant year over year. Friendship with Muslims may play a key role in how this question is answered. For instance, in 2016, almost one-quarter (24%) of those who spent time with Muslim friends strongly disagreed that the majority of terrorism is perpetrated by Muslims. This is compared to 13 percent among those who did not spend time with Muslim friends. (For more on the influence of such friendships, read Barna’s interview with Jeremy Courtney, founder & CEO of Preemptive Love Coalition.)

Christians Are No Longer the Majority

The pushback on Trump’s executive order and the shifts since the election point to a broader softening on immigration policies in America. In just the past 12 months, sentiments have changed on the overall value of diversity. For instance, in 2016, 37 percent of American adults strongly agreed that people from different cultures enrich America, shooting up 10 percentage points in 2017 to almost half (47%). These changes occur across every segment with jumps of 10 percentage points on average among age groups, ethnicities and faith tribes—with the exception of conservatives, who have only shifted three percentage points. 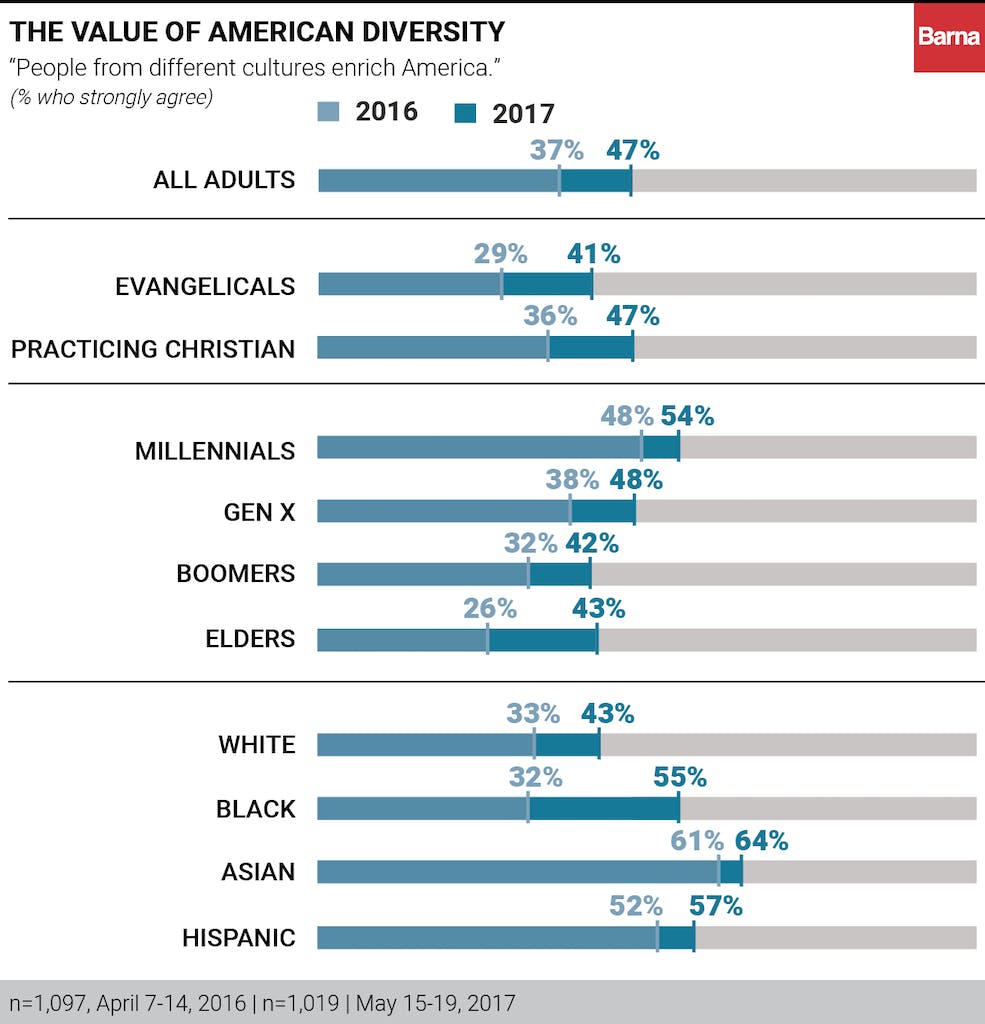 Americans are also more open to allowing immigrants into the country. In 2016, when asked if they agree or disagree with the statement “we allow too many immigrants into the country,” three in 10 30%) strongly agreed. One year later, less than one quarter (23%) strongly agree, a shift of seven percentage points. The drops are particularly significant among the older generations, with Boomers seeing a 16-percentage point drop and Elders a 17-percentage point drop from 2016 to 2017. Again, much remained unchanged when looking at ideological differences. Conservatives (45% to 39%) still feel strongly about limiting the immigrant flow into the United States, while liberals remain as open as they were in 2016 (15% to 14%). Though white Americans are still less inclined than others to be open to immigration, the percentage that feels the U.S. welcomes too many immigrants also dropped 11 percentage points, from 39 percent who strongly agreed in 2016 to 28 percent in 2017. Additionally, evangelicals dropped 11 percentage points from 42 percent to 31 percent. These trends show that those who were most opposed to immigration are the ones who have had the biggest change of heart. 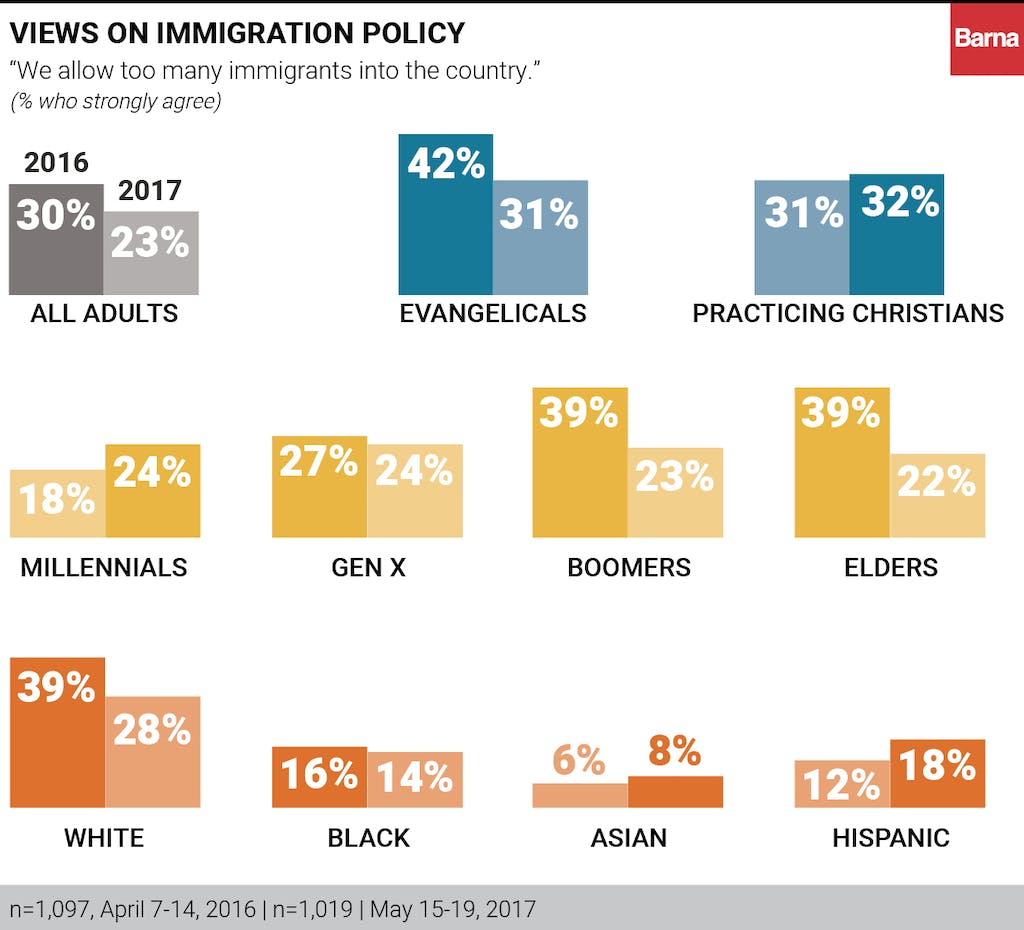 Also at the heart of these shifts is a more open attitude toward refugees. The number of adults who strongly agree that America should welcome refugees during a crisis has almost doubled in a single year, from 18 percent in 2016 to 31 percent in 2017. Images of the Syrian Civil War and stories of the trials of refugees across Europe have likely had a dramatic impact on the perspective among American adults in a very short period, counterbalancing—and even eclipsing—bold national rhetoric on border protection. Not every segment, however, has been as quick to change their minds on refugees: evangelicals, for instance, held steady with a statistically insignificant difference between 12 percent in 2016 and 16 percent in 2017. By comparison, the percentage of practicing Christians who want to welcome refugees in crisis grew from 16 percent to 36 percent in the same period. 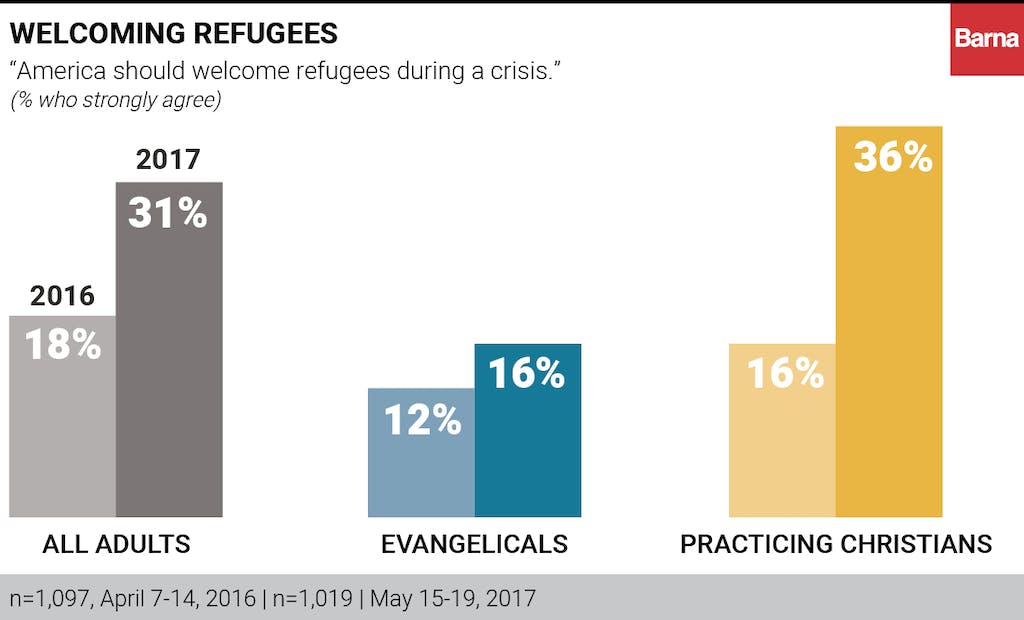 The most recent political conflict over immigration involves Trump’s controversial decision to repeal DACA, which his administration has since chosen to delay implementing so that Congress might come up with a solution for those affected. In 2016, when Barna last asked American adults if amnesty and / or citizenship should be granted to undocumented immigrants under 18, more than half (52%) disagreed. In fact, a plurality (32%) strongly disagreed. However, it remains to be seen if that perspective might have changed along with other views on immigration, particularly as that announcement was met with sharp opposition from all sides—even among conservatives and evangelicals.

As the public is clearly revisiting their feelings on immigrants and refugees, pastors may also be considering how to best prioritize it from the pulpit, alongside more parochial issues. In 2016, when American Protestant pastors were asked to identify issues they are most concerned about, comprehensive immigration reform (9%) was still relatively low on the list, compared to protecting programs that help hungry people and poor people in this country (20%), job creation and unemployment (18%) and balancing the budget and ending deficit spending (17%). 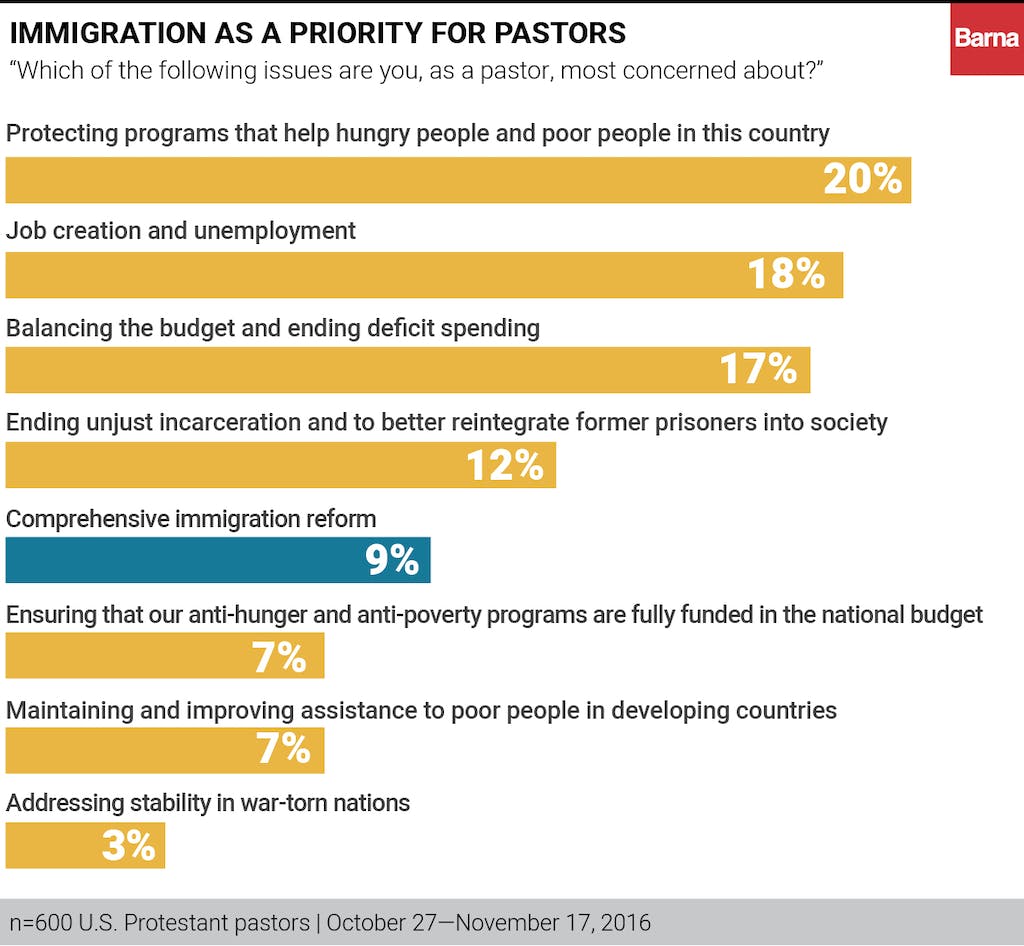 “Over the course of just one year, Americans have shifted dramatically on immigration,” says Roxanne Stone, editor in chief at Barna Group. “What has happened in that year to change so many minds? While it’s difficult as surveyors to pinpoint causation, we can notice public events and rhetoric that have undoubtedly impacted Americans’ opinions toward immigrants. The Syrian refugee crisis has only worsened; immigration has been a major point of reform for President Trump, and in response, public protests against his reforms have garnered significant public attention and participation; additionally terrorist attacks and conversations around them have fueled debates over religiously motivated violence.

“Such attention to immigration has forced Americans to reckon with the issue and come to an opinion,” notes Stone. “Indifference, for many, is no longer an option. We see this clearly in the data, as the greatest shifts occurred among those who previously said they were ‘unsure.’ That group has shrunk considerably, as the numbers for those who favor immigration have risen.

“Christians have been some of the strongest voices in opposition to Trump’s stricter immigration policies,” points out Stone. “This is particularly true when it comes to DACA and those protected as minors. In the data, we also see a significant softening on immigration among practicing Christians. While evangelicals are standing more firmly on stricter immigration policies, this is not true of the broader Church. Compassion toward refugees and immigrants—an often stated command in the Bible—has become a theme for many public Christian voices and many American churches.”

Photo by Nitish Meena on Unsplash

About the Research
2016 study
Interviews with U.S. adults included 1,097 web-based surveys conducted among a representative sample of adults over the age of 18 in each of the 50 United States. The survey was conducted April of 2016. The sampling error for this study is plus or minus 3 percentage points, at the 95% confidence level. Minimal statistical weighting was used to calibrate the sample to known population percentages in relation to demographic variables.

2017 study
Interviews with U.S. adults included 1,019 web-based surveys conducted among a representative sample of adults over the age of 18 in each of the 50 United States. The survey was conducted May of 2017. The sampling error for this study is plus or minus 3 percentage points, at the 95% confidence level. Minimal statistical weighting was used to calibrate the sample to known population percentages in relation to demographic variables.

Pastor study
The PastorPollSM included 600 telephone interviews conducted among a representative sample of U.S. senior pastors of churches from within the continental U.S. The telephone interviews were conducted from October 27 to November 17, 2016. The sample error is plus or minus 4 percentage points at the 95% confidence level.

Does School Violence Begin in the Home?

Mass shootings in schools may get the most coverage, but violence at school is happening everyday. Why are our sanctuaries of learning often unsafe for students? Barna asked American adults what they believe leads to school violence. Findings show that most point to the home as the source—but there are notable differences among ethnicities and faith groups.