By now you’re well-acquainted with public contention over wage inequality or workplace discrimination, but a new Barna report hints at a different professional gap between men and women, one more profoundly linked to an awareness of vocation. First, the good news: Overall, this study of working Christians indicates men and women have an equal chance of finding vocational satisfaction, fulfillment, support and a sense of calling—just not in every stage of life. In particular, working mothers, compared to fathers as well as women in other seasons of life, are consistently less satisfied on almost every level.

This article is part of an online series covering central findings from Christians at Work, Barna’s first report in a multi-year initiative focused on vocation. The study, conducted in partnership with Abilene Christian University, shows that Christians see sacred value in all jobs—a point explored further in part 1 of this series. However, the research shows that developments in relationships or family correlate with one’s ability to thrive in their own work.

The Family Factor: Can Women Really Have It All?
The Christian men and women Barna surveyed share goals and qualities as collaborators in work and the Kingdom. In general, they are similarly likely to feel “called,” to make a difference, to find purpose and to feel their strengths are put to use, inside and outside the workplace. But the point at which they most diverge is when parenting enters the picture.

Society has long debated whether women can “have it all”—or what that means in the first place. This study suggests that mothers are making more compromises than fathers do in pursuit of a family and / or a satisfying career. While this group is relatively gratified in their family relationships, Barna’s study shows that working moms (compared with fathers, single men and single women) are well behind on all metrics of satisfaction—relational, spiritual, emotional, you name it. Their attitudes toward vocation also differ. For instance, even though both mothers and fathers share an equal desire to use their gifts and talents for the good of others (64% and 62%), mothers feel significantly less called to or made for their current work than fathers (38% compared to 55%).

Moms and dads share an equal desire to use their gifts and talents for the good of others, but working mothers feel significantly less called to their current work than fathers (38% and 55%) Click To Tweet

Based on this study alone, Barna can’t weigh in on how vocation is experienced among stay-at-home-parents, as the sample was made up of only employed Christians and the aim was to specifically explore vocational attitudes within one’s paid occupation. But as U.S. women increasingly assume the role of sole or at least cobreadwinner, these findings have widespread implications in both the home and workplace. Tellingly, the sweet spot for Christian women’s vocational fulfillment—and, inversely, the low point for male respondents—is actually when they have never even been married. Christians at Work delves more into how single women find a drive and gratification exceeding even that of working fathers, while single men struggle to get their bearings—professionally, relationally and spiritually. 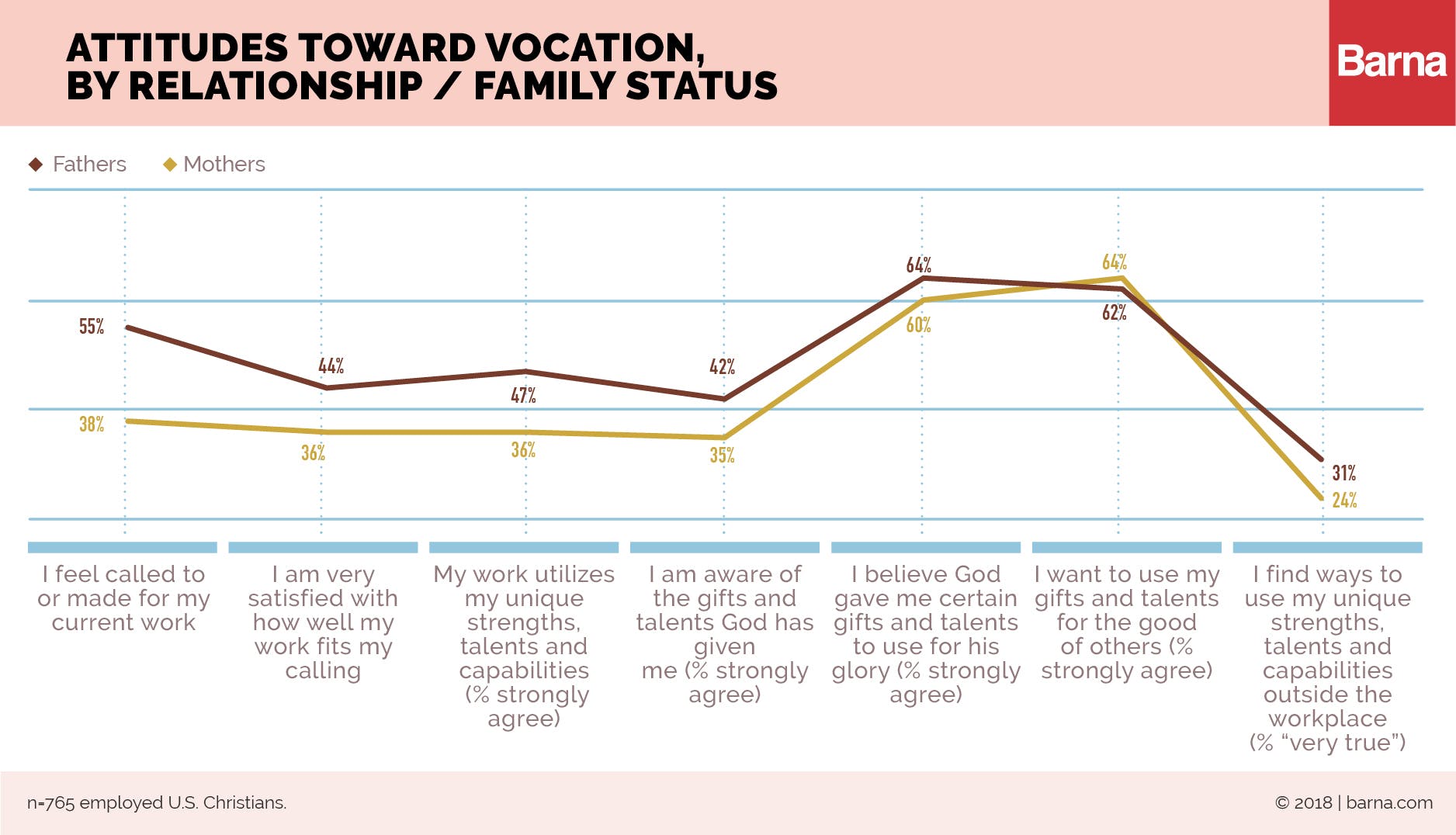 Insights from Practitioners
“If we’re helping women integrate faith and work, whether she is a stay-at-home mom or is holding down a career, we need to articulate to those women that they are both representing God in the world. But in our current age, more and more women are at work, and staying at home is actually more often a privilege or economic freedom. It’s not even about vocation; it’s about bills. Sometimes the Church is talking to a world which only exists for a limited few, and that can leave feelings of guilt and uncertainty for the rest. I’ve talked with a lot of women who are working out how they can pursue their passion, and they often ask whether they have permission to do that, because it feels somehow like betrayal to work and to love it. For mothers, the issues of fulfillment and vocation become conflicting. There are choices that are made at certain intersections of a woman’s life, and the pathway is not as linear as a man’s often is. When you have both partners working, the woman is still often carrying the load of the domestic tasks, arranging the family’s and child’s schedules. Who is staying home if somebody’s got strep throat? I’ve heard it described as the ‘mental load,’ and that’s a job on top of another job. I think it’s like having too many tabs open on your laptop; everything slows down. Fundamental things like maternity leave or childcare have a massive impact.” —Jo Saxton, pastor, author, leadership coach

Put It to Use: Questions and Actions for Church Leaders

Though Christian workers more often associate religious and pastoral roles with being a “calling” or serving the common good, it may not matter to most Christians whether they or someone else works in a “sacred” or “secular” space. In a new study, Barna asked whether it was better for a Christian to become a pastor or missionary, or to represent his or her faith well at work.