In October of this year, the New York Times reported more than a dozen initial allegations of sexual harassment, assault or rape against film producer Harvey Weinstein. Though accusations of men abusing their power are nothing new, the revelations about Weinstein prompted other victims to come forward in unprecedented numbers and public fashion, sparking the #metoo movement and almost daily reports of the sexual misconduct of high-profile figures in film, comedy, journalism, politics and other industries.

The flood of new allegations has caused many to ask: What counts as sexual harassment? While there is a general legal definition for the workplace, a national survey of U.S. adults conducted by Barna between October 19-25, 2017 (shortly after the original Weinstein report) asked American adults to identify specific acts that they consider to be harassment. The answer differs based on gender, but Americans say that sexual harassment is most often about being touched or groped (women: 96%, men: 86%) or being forced to do something sexual (women: 91%, men: 83%). However, the list encompasses more than just these extremes, and includes someone touching themselves intentionally or masturbating (women: 89%, men: 76%), making sexual comments about someone’s looks or body (women: 86%, men: 70%) and sharing intimate photos or videos of someone without their permission (women: 85%, men: 71%). The list goes on (see chart below).

Given the range of behaviors selected by Americans, it’s increasingly clear—to some, for the first time—how insidious the problem of sexual harassment is. In fact, three in 10 American adults (29%) tell Barna they have been sexually harassed. Women in this group report experiencing it almost three times more than men (42% vs 16%). Younger generations also report harassment at a higher rate: Millennials (31%) and Gen X (35%) are twice as likely as Elders (16%) to say they have been sexually harassed, with Boomers somewhere in the middle (26%). A further 15 percent of all adults say they have witnessed sexual harassment, and almost one-quarter (23%) says someone they know well was sexually harassed. However, the majority of American adults (52%) says they have not encountered sexual harassment in any of these ways. A small 5 percent preferred not to answer. 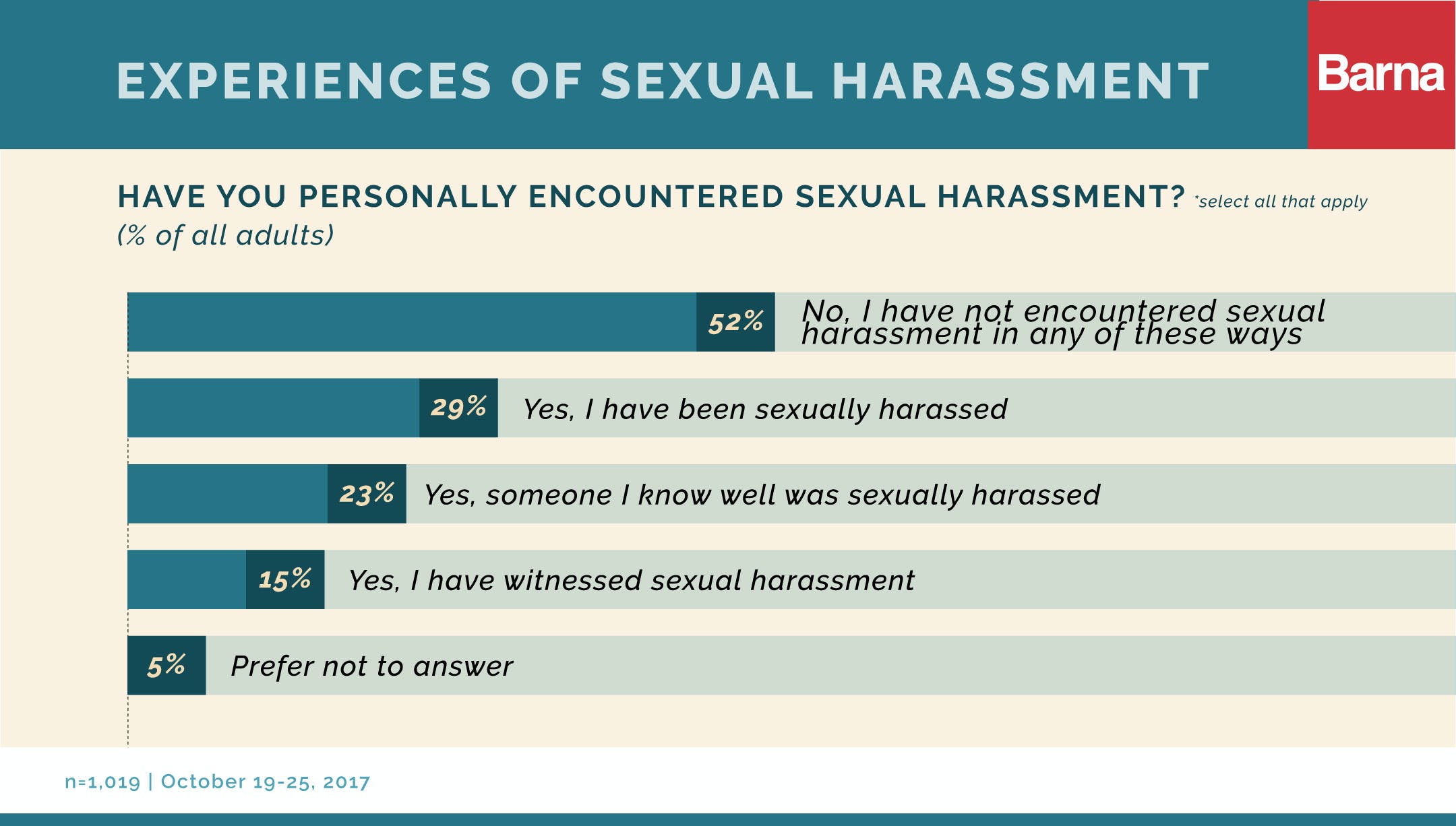 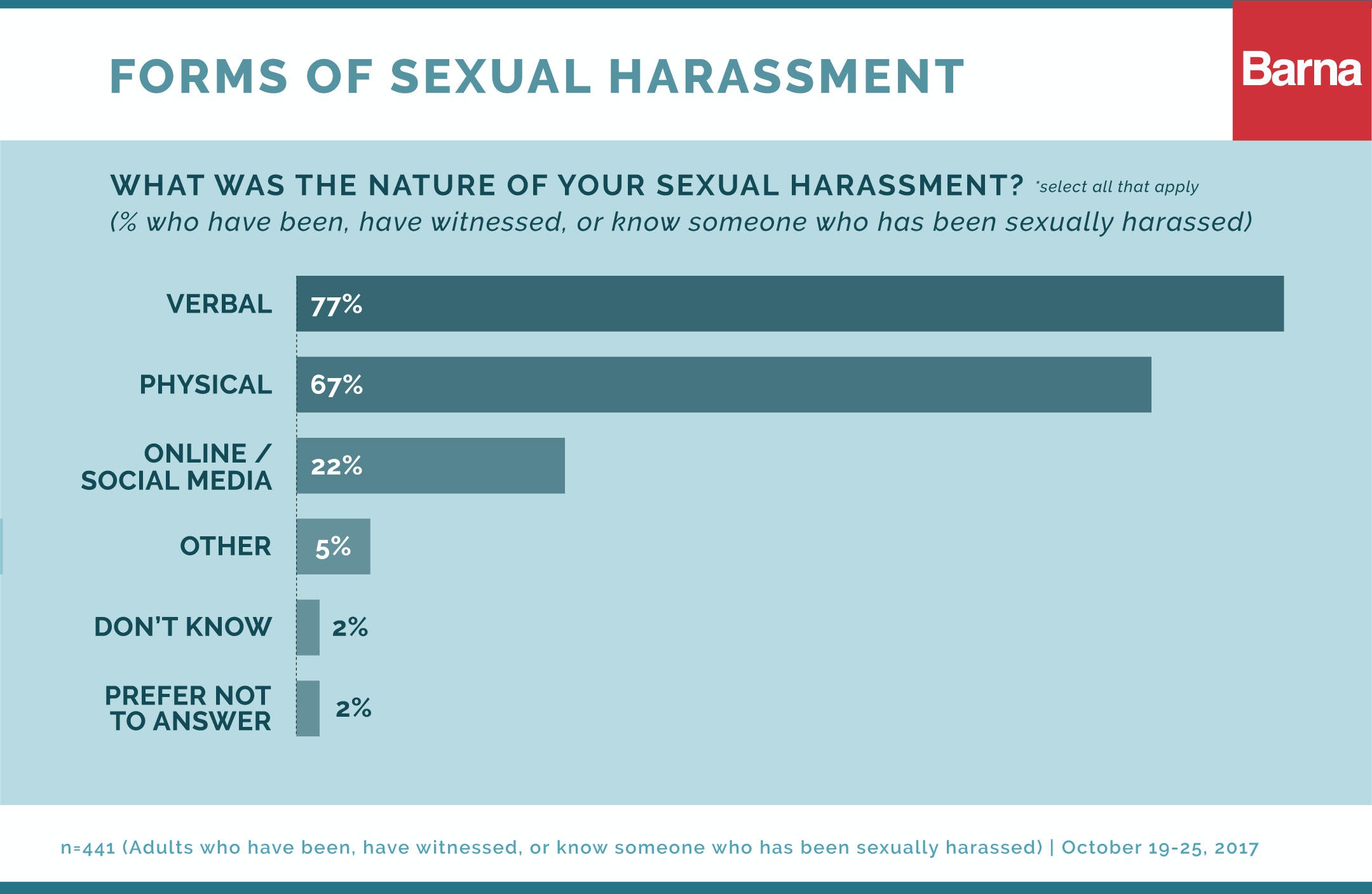 One of the lessons from the recent wave of allegations is that many cases of sexual harassment and assault go unreported. Many victims, it seems, not only feel reluctant to tell their stories, but rarely report the crime. Among those who have personally been harassed, have witnessed a harassment or know someone who has been harassed, only one-third (34%) indicates to Barna that those acts were reported. Does the type of harassment make a difference in whether or not people report it? Surprisingly, people who claim online or social media harassment are the most likely to report it (50% of those who experienced or witnessed it said it was reported). Perhaps this is due to the anonymous nature of the harassment—it is not likely the harasser is someone they personally know and the stakes for retaliation are much lower. As you might expect, people are more likely to report physical harassment (40% say it was reported) than verbal harassment (35%), which is reported the least. Even so, a staggering six in 10 (59%) say all types of sexual harassment went unreported.

So why might the majority of instances of sexual harassment go unreported? Among those who say the sexual harassment experienced or witnessed went unreported, the primary reason they assume people don’t report sexual harassment is for fear of not being believed (30%). Another barrier to reporting is a fear of retaliation by the offender (25%). Other less frequent obstacles include a lack of confidence in the system (13%), uncertainty about what qualifies as sexual harassment (10%), a fear of public or social backlash (9%), a fear about reputation (6%) and social pressure to not report (3%).

Most common reason cited for not reporting sexual misconduct: fear of not being believed. Click To Tweet 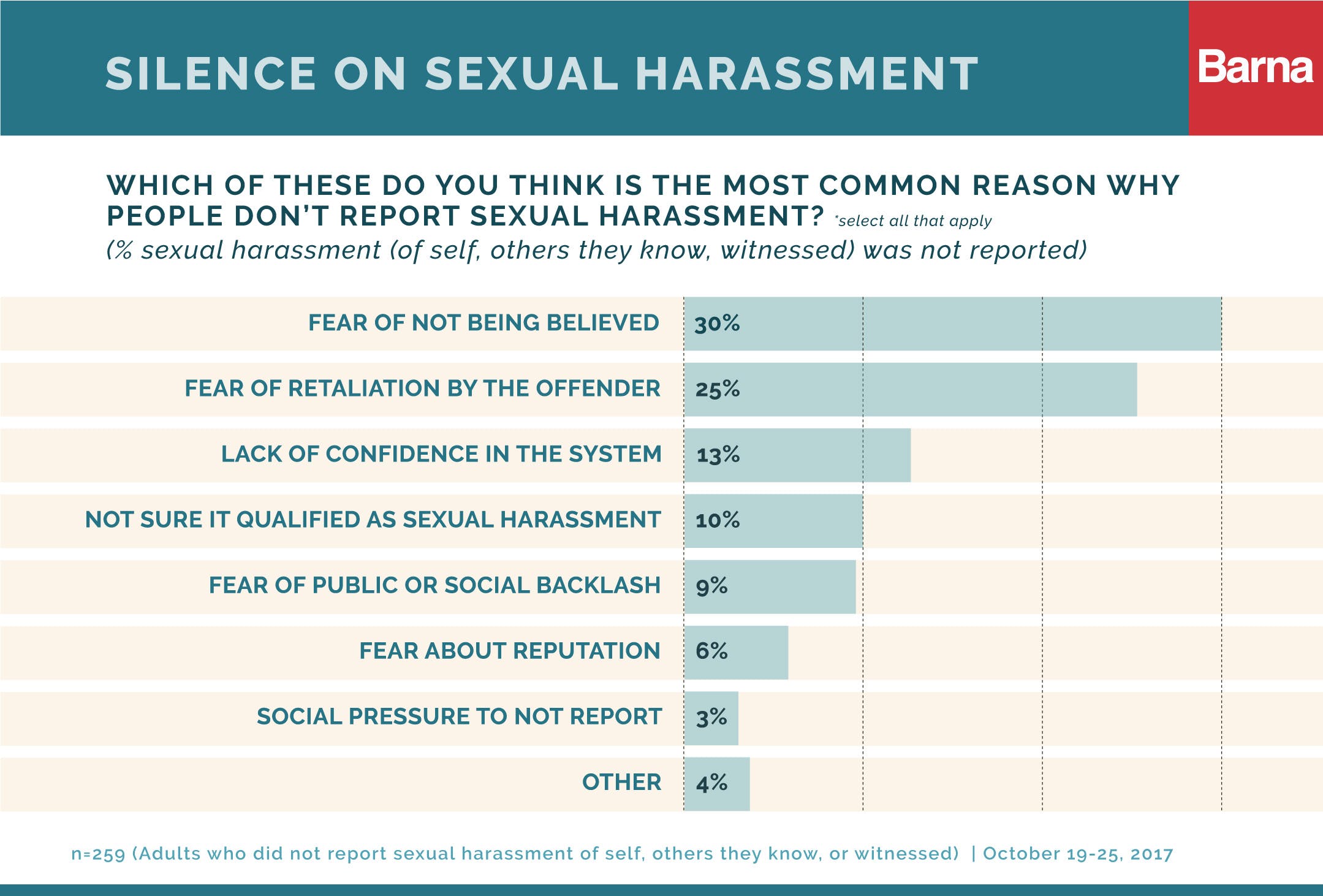 What the Research Means
“The past few months have ushered in an unprecedented level of awareness and shock at the pervasive experience of sexual harassment,” says Roxanne Stone, editor in chief of Barna Group. “The revelations surrounding celebrities and politicians have opened up a floodgate for women especially, but men too, to acknowledge the ways in which they have experienced both subtle and overt forms of harassment in their workplaces, churches and social circles. The data bears this out: Nearly half of all American adults admit to experiencing or witnessing sexual harassment at some point in their lives. Four in 10 women say they have personally been victims of it.

“Yet, for all its ubiquity, people are still hesitant to report sexual harassment,” points out Stone. “A murky definition of what qualifies as sexual harassment does not seem to be the prime obstacle to reporting sexual misconduct. The research shows that Americans are in agreement on what counts as sexual harassment; and they are quick to include most unwanted sexual behavior, no matter how seemingly benign. Instead most people point to a fear of retaliation and, even more frequently, to a fear of not being believed.

“But, in the past few months, we’ve seen behavior that historically may have been excused or consciously ignored, now being called out as the harassment it is. Perpetrators are being held accountable to those behaviors in a massive court of public opinion. And many are facing true consequences. The breadth and ramifications of the #metoo conversation have been astonishing.

“As men and women increasingly share spaces and workplaces,” continues Stone, “we are now beginning to grapple with the intensely sexual ideas that have been allowed to define gender relationships, not to mention the extremely complex power dynamics at play in a society where men still hold the majority of top-level leadership positions.

“Leaders in every level of society—from entertainment, to the marketplace, to politics, to churches—must honestly wrestle with this challenging issue and what it means for their institutions. Pastors and spiritual leaders, especially, must be ready to talk with their members: to hear the stories of the victims, to offer counseling services, to speak from the pulpit on the respect and humanization that gender equality really requires. Churches, with a message of brotherly and sisterly love, have an opportunity to be leaders in this disorienting conversation.”

About the Research
Interviews with U.S. adults included 1,019 web-based surveys conducted among a representative sample of adults over the age of 18 in each of the 50 United States. The survey was conducted from October 19-25 of 2017. The sampling error for this study is plus or minus 3 percentage points, at the 95% confidence level. Minimal statistical weighting was used to calibrate the sample to known population percentages in relation to demographic variables.

Photo by Sunyu on Unsplash

Many American adults will enjoy Friendsgiving this week, an expression of the rich community that many adults tell Barna they find in their own neighborhoods. This infographic sheds more light on how Americans report sharing their lives with folks who occupy the same zip code.