For more than three decades, Barna has been collecting data on religion and spirituality in America. In recent years, the research firm has been able to focus much of its study on matters of Millennials and Christianity, particularly when it comes to dramatic cultural shifts in worldview and toward secularization.

When Barna was approached for a study on the spirituality of American Jewish Millennials (available now in a brand new report, Jewish Millennials: The Beliefs and Behaviors Shaping Young Jews in America), we saw an opportunity to look closely at Millennials within another faith group in the United States—to see how young Jews are experiencing and engaging the faith of their ancestors in the rapidly changing culture of the 21st century.

Overall, we continue to discover that some of the trends we’ve observed in the Christian Church hold true widely across religions and generations in the U.S. and, in the case of this study, for Millennial Jews. We’ve found that Millennial Jews in America, generally, present quite a paradox. They are incredibly influenced by their immediate relationships, yet detached from communal or mutual Jewish experiences in a broader sense. They are free-thinking and flexible in their spiritual and religious identity, yet they gravitate toward formal customs and ancient expressions of faith. Often molded by intermarriage and multiculturalism, they reject rigid or traditional definitions of what it means to be Jewish, but—more than any other generation—still consider their Jewish identity to be very important to them. Below, we look at a few key observations of this report.

More than any generation, Jewish Millennials say their Jewish identity is “very important” to them. Click To Tweet

In addition to the in-depth quantitative and qualitative studies, Barna is acutely aware that this study owes much to the large body of respected research on Jews, and we hope our own report makes a distinct contribution to it. We present Jewish Millennials in the hopes that it might satisfy curiosity about the mindsets of Millennial Jews and deepen our collective understanding of the future of religion in America. (Read more about the definitions, discussions and methods that shaped the study.) 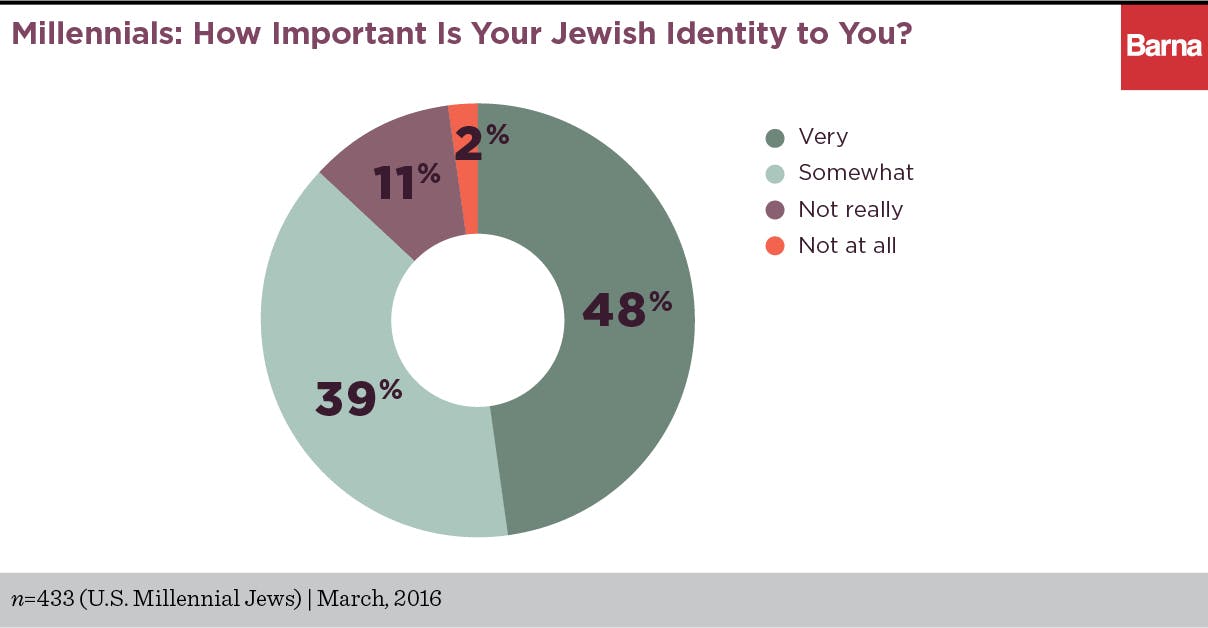 Evidence of Spiritual Fluidity Among Jewish Millennials
One of Barna’s key findings is that the importance of religious faith to Jewish Millennials (92% “very” + “somewhat” important) and, on a broader level, their interest in matters of faith and spirituality seem to be increasing compared to other generations. This is a finding somewhat unique to the Barna report and the religious parameters of its sample, which allow the researchers to observe not only a rise in atheists (as other studies have noted), but also a rise in spiritual believers. Part of this may be because some Millennials are still in the developmental and discovery period of their lives and therefore are naturally curious and interested in faith and spirituality as a general process of adulthood. However, for Jewish Millennials, this interest translates into a rare self-identifier, as they are also much more likely than other generations to consider themselves as “spiritual” (75% “somewhat” + “definitely”). Roughly half are comfortable talking about their spiritual views (48%) or listening to the views of others (53%). Unsurprisingly, agnostics / atheists are not as engrossed in matters of faith or spirituality (82% “not very” + “not at all” interested).

The majority of Jewish Millennials still say they subscribe to Judaism as their religious faith—however, not all of them do so exclusively, and the practice of this faith varies. When given a range of options and allowed to select all that apply, nearly half of Jewish Millennials (44%) chose Judaism solely as their subscribed religion. More than half do not affiliate with traditional Jewish denominations (52%), however, and a similar percentage believes Jews can hold faiths other than Judaism (56%). Thus, others choose Christianity (14%), a hybrid of Judaism and Christianity (10%), atheism / agnosticism (9%) or no particular faith (13%)—a range that reinforces the notion of Jewish identity as heritage and people group as much as a specific spiritual belief set. In this context, it should be assumed some of those who select an option that includes “Christianity” may be recognizing any personal association with the faith, such as identifying with the religion of a Christian parent, rather than a specific or devout expression, such as Messianic Judaism. (A combined 9 percent identified with Islam, Buddhism, Hinduism or other religions and, given their small sample size, they are not included in segments for analysis.) 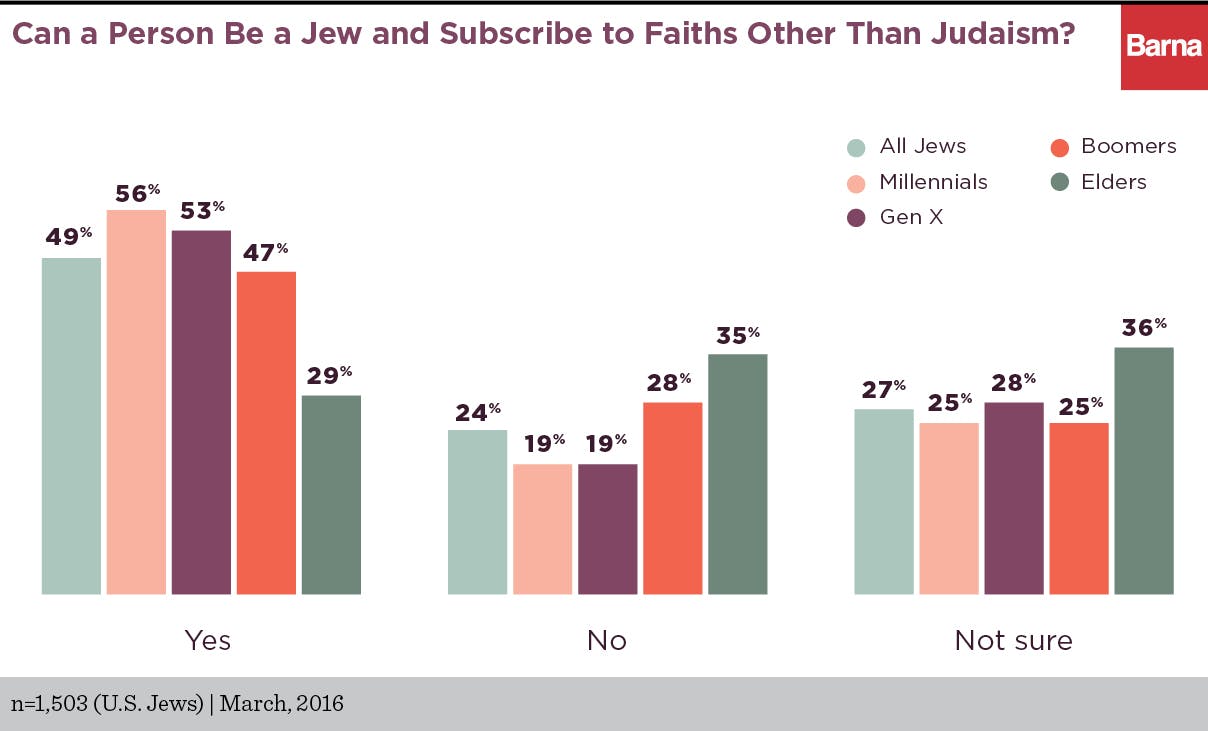 The Influence of Intermarriage Will Continue
Given the Jewish community’s emphasis on family, it’s not surprising that a greater percentage of Jewish Millennials are married than among American Millennials as a whole. Even with a 10-percentage-point difference, though, just one-third of Jewish Millennials has walked the aisle (35%, compared to 25% of all U.S. Millennials). Among young Americans overall and the Jewish community specifically, the likelihood of being married increases significantly as they near the older end of the Millennium spectrum; 41 percent and 49 percent of those over the age of 25 are married, respectively. The trend of delayed marriage, as well as the chances of intermarriage, continue with this generation of American Jews: Seven in 10 Jewish Millennials (69%) have been in a serious relationship with someone not Jewish. Among Jewish Millennials who are not married and have never seriously dated a gentile, only 17 percent would not consider this kind of serious relationship.

71% of Jewish Millennials are at least somewhat committed to raising their children as Jewish. Click To Tweet

About the Research
Barna held qualitative focus groups with Jewish Millennial participants in February 2016 to inform the development of the subsequent quantitative questionnaire design and to provide context for interpreting the quantitative data findings. The focus group sessions were held in two cities—Paramus, New Jersey and Los Angeles, California—representing the East and West coast, respectively. Each city consisted of one focus group with eight participants who considered themselves to be religious and another with participants who did not consider themselves to be religious. Participants had to be at least 18 years old to participate and no older than 31 years old. Each focus group was guided to discuss topics on Jewish identity, spirituality, experience, community, causes and generational difference between them and their parents on matters of identity, faith and marriage. A total of 32 Jewish Millennials participated in the qualitative portion of the research.

The quantitative portion of the research required Barna to conduct an online survey in March and April 2016 for the Jewish Millennial study, with a total sample size of 1,503 Jewish adults 18 years or older. The sample error for the survey is plus or minus 2.5 percentage points at the 95-percent confidence level.

The screening criteria used to qualify adults as Jewish are the same for both the qualitative and the quantitative portions of the study. The requirements included respondents considering themselves as Jewish and having at least one Jewish parent who is at least 100 percent Jewish or having two Jewish parents who are both at least half Jewish.

Barna Group was solely responsible for data collection, analysis and writing of the report.

Funding for this research was made possible by the generous support of Jews for Jesus. Download their additional resource here.

Most Pastors Feel Energized and Supported

The call to pastoral ministry has its unique benefits and challenges, so in an effort to acknowledge the risks and rewards of pastoral ministry today, Barna created an infographic examining the physical, emotional and spiritual wellbeing of pastors. Take a look.