The Buzz About Alcohol: America’s Views on Booze

If you happen to encounter a rowdy band of young men in lederhosen this month, you might be within range of an Oktoberfest celebration. But this German festival is known less for its traditional folk costumes than the consumption of beer—and a lot of it. This holiday celebration kicks off a few consecutive months associated with festive drinking, from a famous stein of Löwenbräu at Oktoberfest, to spiked egg nog under the mistletoe.

In this season of booze, there’s no better time to look at some interesting new research from Barna about the drinking habits of American adults. Acceptable standards for drinking and definitions of its excesses—particularly in religious circles—can be highly debatable, and at times deeply personal. Below, Barna uncovers Americans’ drinking habits (or, at least, what they report them to be) and their views of alcohol consumption.

(This, and other new research, will be covered in the upcoming edition of Barna Trends, examining the intersection of faith and culture.)

America’s Drinking Habits
Most Americans are very comfortable with drinking alcohol. Two-thirds of adults ages 21 and older (67%) drink at least occasionally. While Elders are more likely than Millennials to affirm that they drink alcohol, Millennials who drink actually consume more than other generations (or, at least, they say they do), with an average of three drinks per week, compared to the average adult, who reports consuming two drinks a week. 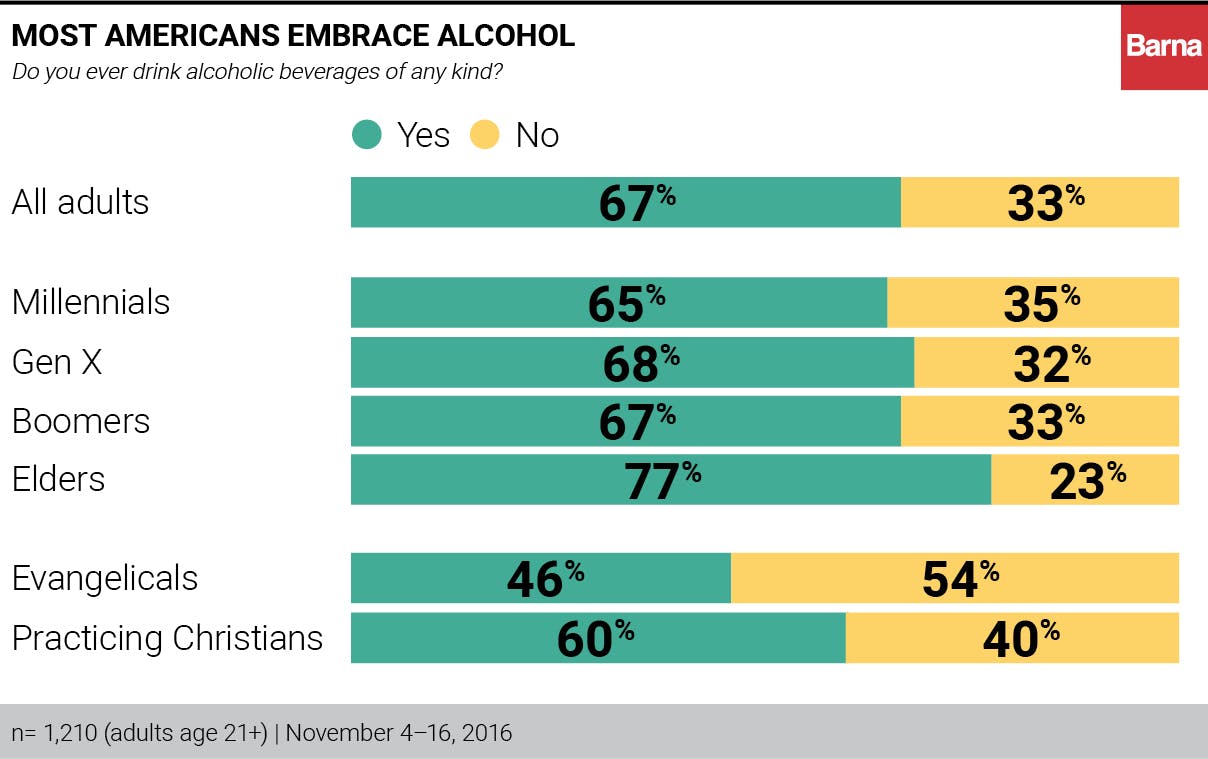 Though most Americans are comfortable with drinking, three in 10 admit they sometimes drink more than they should. Larger quantities of Millennials (43%) and Gen X (38%) who drink at least occasionally report that they sometimes overdo it, compared to just 15 percent of older generations (Boomers and Elders) who say they sometimes consume too much liquor. This may come as no surprise given the more boisterous social life of young people.

3 in 10 Americans of drinking age say they sometimes drink more alcohol than they should. Click To Tweet 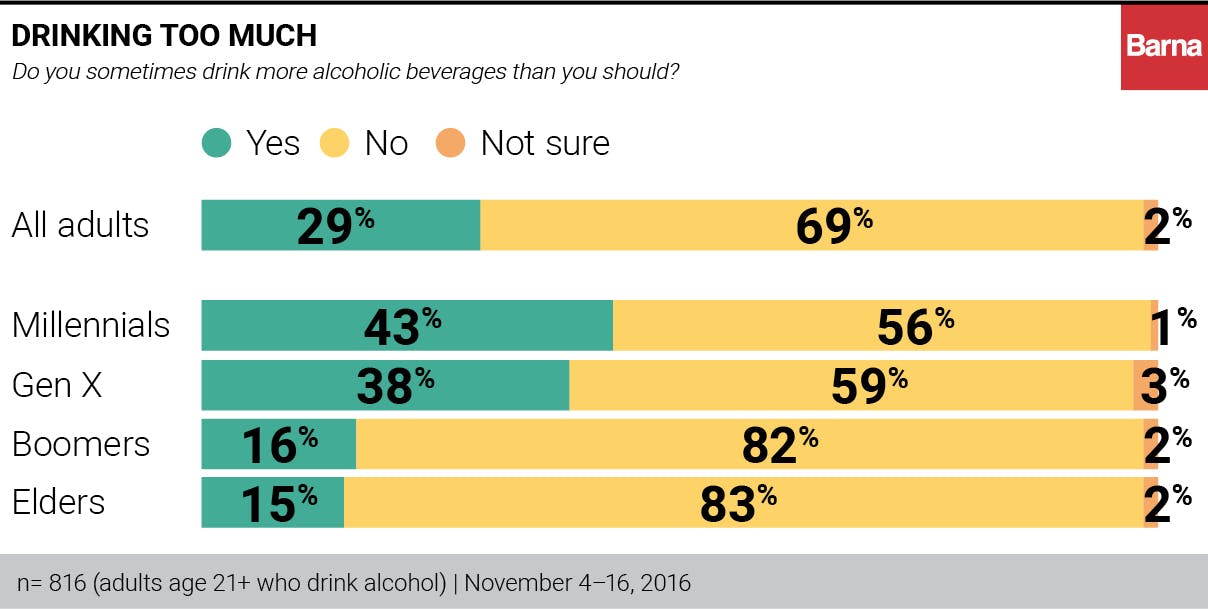 Religious faith plays a key role in decision-making about alcohol consumption. Some Christian groups, particularly evangelicals and Methodists, encourage abstinence as a precaution against drunkenness, and other faiths like Mormonism and Islam outright prohibit it. For instance, evangelicals (46%), practicing Christians (60%) and those of other faiths (41%) are less likely to partake in drinking alcohol, and if they do drink, they consume less than the average adult in a given week. Just 2 percent of evangelicals acknowledge that they sometimes consume too much alcohol. Roughly one-third of U.S. adults 21 and older (33%) say they do not drink alcoholic beverages of any kind.

Evangelicals and practicing Christians are less likely to drink, but if they do, they consume less. Click To Tweet

A Glass Half Empty
Though we’re far removed from the temperance movement, Americans today still feel ambivalent about the effects of alcohol. For instance, among those of legal drinking age who do not drink, the most common reason given is seeing the negative effects drinking has on family members and close friends (27%). Another one-quarter (25%) says they don’t like the taste of alcohol. People also choose not to drink for health reasons (21%) and a dislike for putting intoxicating substances of any kind into their bodies (19%). Just one in 10 (10%) says they have an addiction and are in recovery. 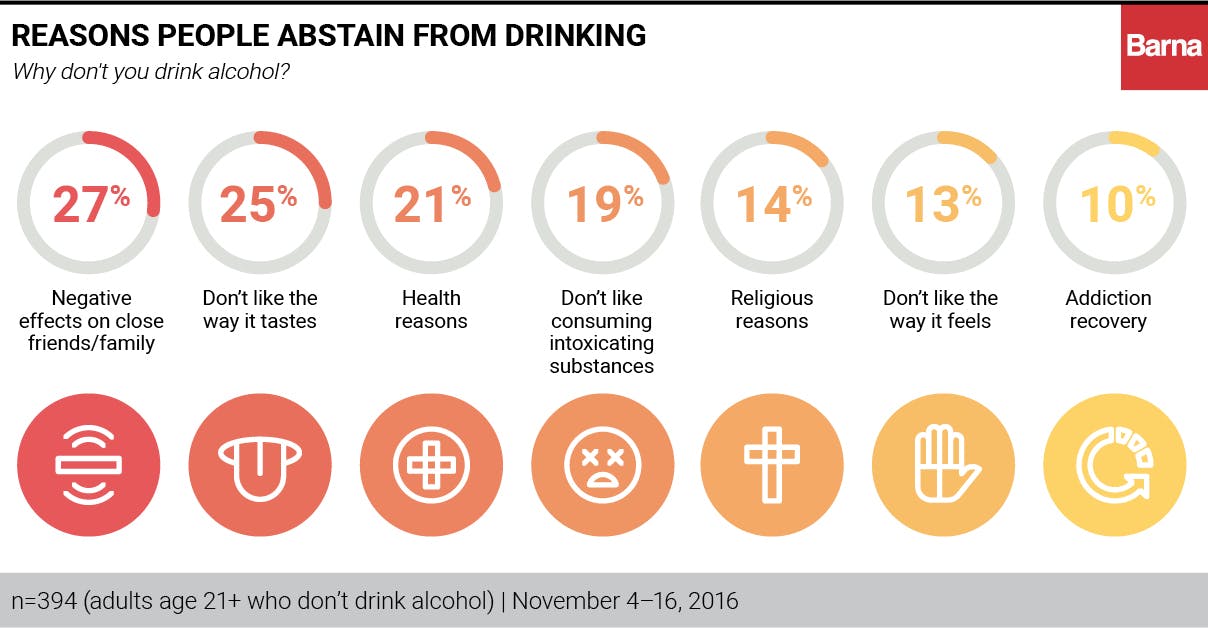 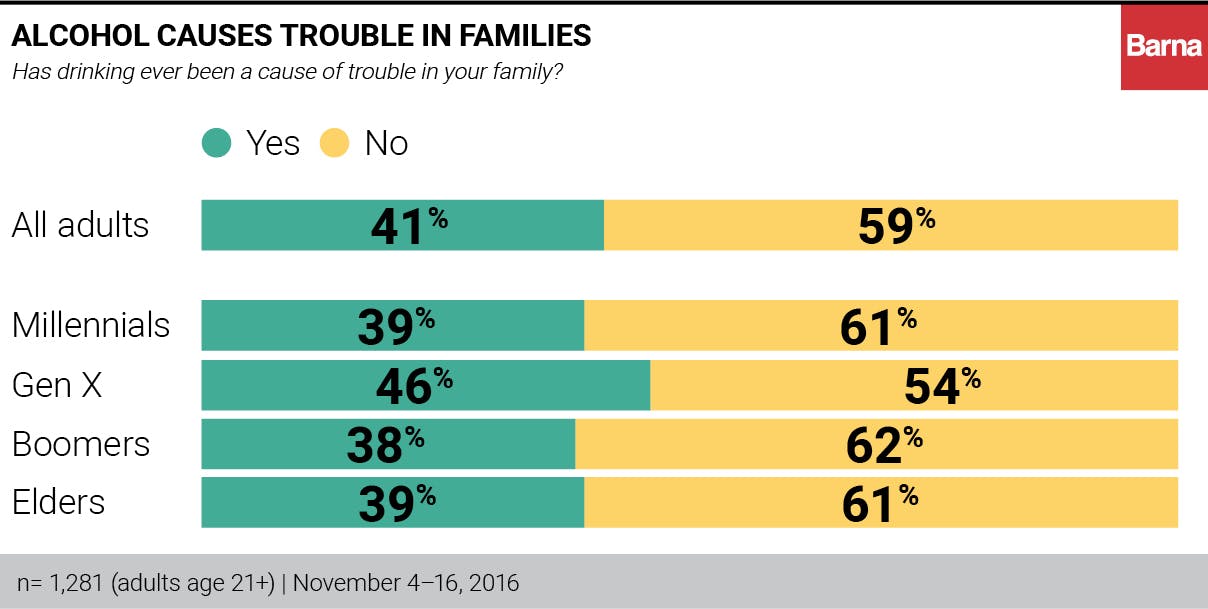 Last Call
Promoting moderation is considered one way to reduce alcohol abuse. How do Americans regard moderate drinking habits (that is, having one or two drinks a day, as defined by the Dietary Guidelines for Americans)? Most adults agree that drinking in moderation is either good for your health (23%) or makes no difference (39%). Slightly more than one in five (22%) believe it is bad for your health and another one in six adults (16%) doesn’t have an opinion on the matter. Twice as many men than women think having just a drink or two a day has health benefits (32% vs. 14%). Gen X are also more likely to believe it is good for your health (28%). Other segments more likely than average to perceive moderate drinking as being beneficial include married adults, those with children under 18 living at home and high-income households. Half of all Elders (49%) believe practicing moderation doesn’t make any difference in personal health. 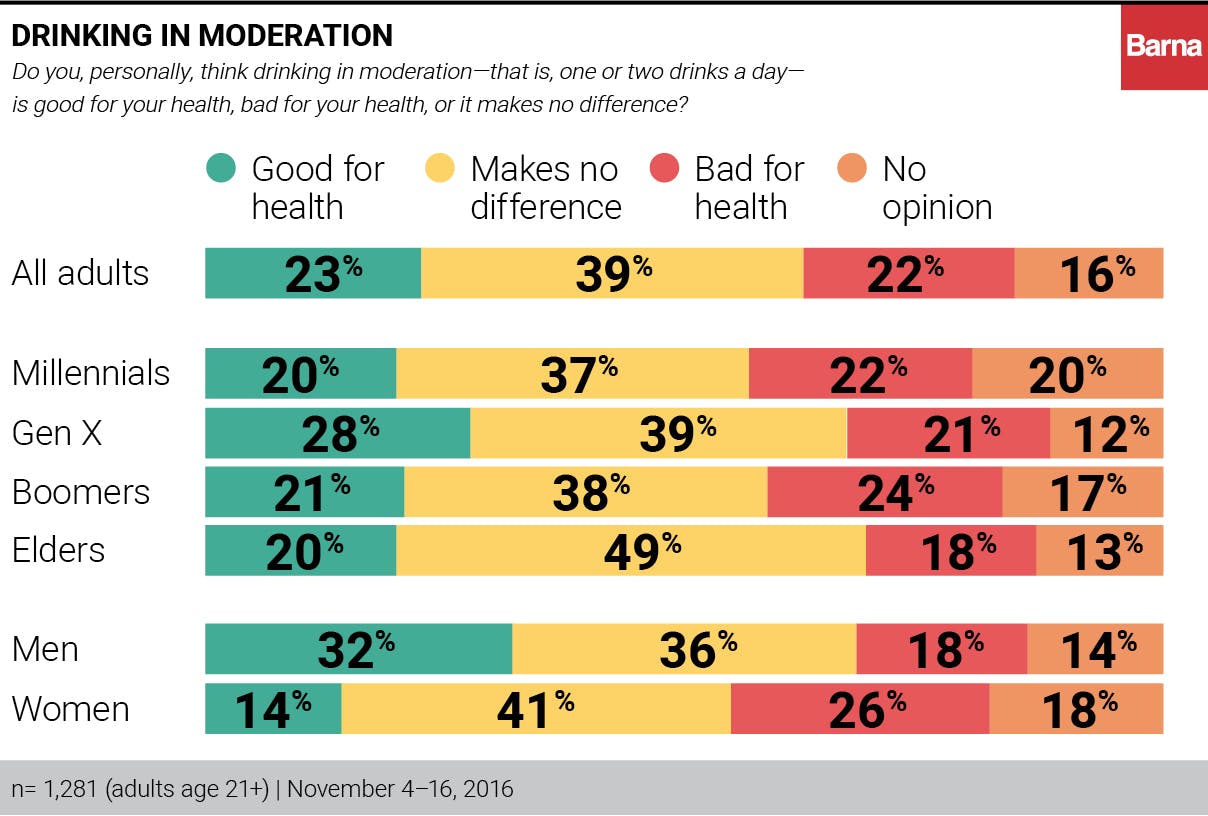 Another hotly debated approach to curbing alcohol abuse has to do with lowering the drinking age in the U.S. from 21 to 18. The rationale is that allowing 18- to 20-year-olds to drink in regulated environments with supervision would decrease unsafe drinking activity in the future, especially considering that most teens drink already, and in unsupervised environments. The majority of adults (60%), however, opposes such a law, compared to the one in four (24%) who is in favor of it or the 16 percent who do not have an opinion. Opposition to lowering the drinking age increases with age. Nearly half (48%) of Millennials, six in 10 Gen X (58%), seven in 10 Boomers (69%) and nearly three in four Elders(74%) oppose lowering the drinking age. Evangelicals (86%) and practicing Christians (68%) are more likely to oppose changing the current law compared to just over half of non-Christians (52%). Women are more likely than their male counterparts to oppose reducing the legal drinking age (67% vs. 53%). 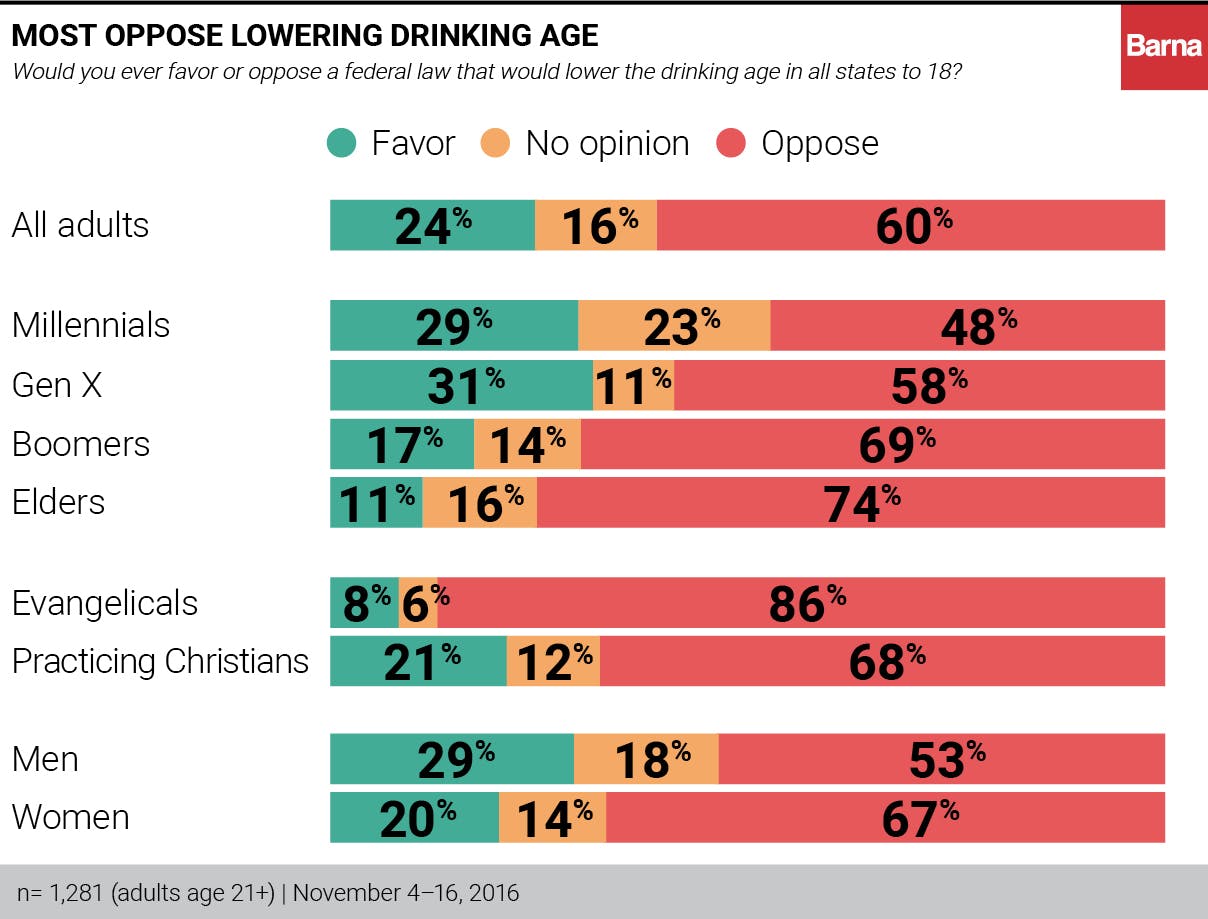 For an optimistic opinion about alcohol, talk to adults who do drink at least occasionally. They are more likely than nondrinkers to believe moderate drinking has health benefits and that the legal drinking limit should be lowered to 18. They are also less likely to say that drinking has caused trouble in their family.

About the Research
Interviews with U.S. adults included 1281 web-based surveys conducted among a representative sample of adults over the age of 18 in each of the 50 United States. The survey was conducted in April and November of 2016. The sampling error for this study is plus or minus 3 percentage points, at the 95% confidence level. Minimal statistical weighting was used to calibrate the sample to known population percentages in relation to demographic variables.

Photo by Yutacar on Unsplash

Half of Jewish Millennials say their Jewish identity is “very important” to them. So how do they define or embrace that identity? In a brand new report, Barna looks closely at the ways young Jews in America experience and engage with tradition in a rapidly changing culture.