If you’re like most Americans, you’re probably finding time in these summer months to hit the national parks, beaches and major cities all over the country. And if you fall within the 40 percent of American adults who hold a passport, you may even venture farther to feed your travel bug. Is there evidence of this global interest among churchgoing Americans—who are, after all, members of a religion that stretches around the world and across cultures? And how does global travel impact American Christians’ perceptions of their own country?

Barna recently conducted a broad study of the U.S. Church’s ideas of global mission and justice, in partnership with Seed Company. As a part of that effort, we wanted to know: Just how expansive is the world of the individual American churchgoer? Many churches encourage cross-cultural engagement through missionary support, short-term missions trips, partnerships with churches abroad and poverty alleviation. So it may come as no surprise that Christians as a whole are a well-traveled group. While some of that travel is certainly for pleasure, cross-cultural experiences for any reason can have a huge impact on people. In the following research sample, we’ll look at some of their travel experiences and attitudes toward other nations and their own.

Most American Churchgoers Travel Abroad
American churchgoers are inclined to travel—nearly two-thirds (62%) have traveled outside the U.S. in their lifetime. Most of those travelers went abroad more than a year ago (40%), and just over one-fifth (22%) made such a journey within the past year. However, almost four in 10 (38%) have never traveled outside the United States at all. Millennial churchgoers are significantly more likely to have traveled recently outside the U.S. than any other generation, with Gen X being the least likely to have ever left the country.

Nearly two-thirds of American churchgoers have traveled outside the U.S. in their lifetime, usually for up to two weeks. Click To Tweet

Among the churchgoers who have been outside the U.S., the most common length of travel for a single trip is between one and two weeks (34%). The length of time a churchgoer has spent abroad goes up with age, income and education—unsurprisingly, as each of these factors increases opportunity and resources to explore. 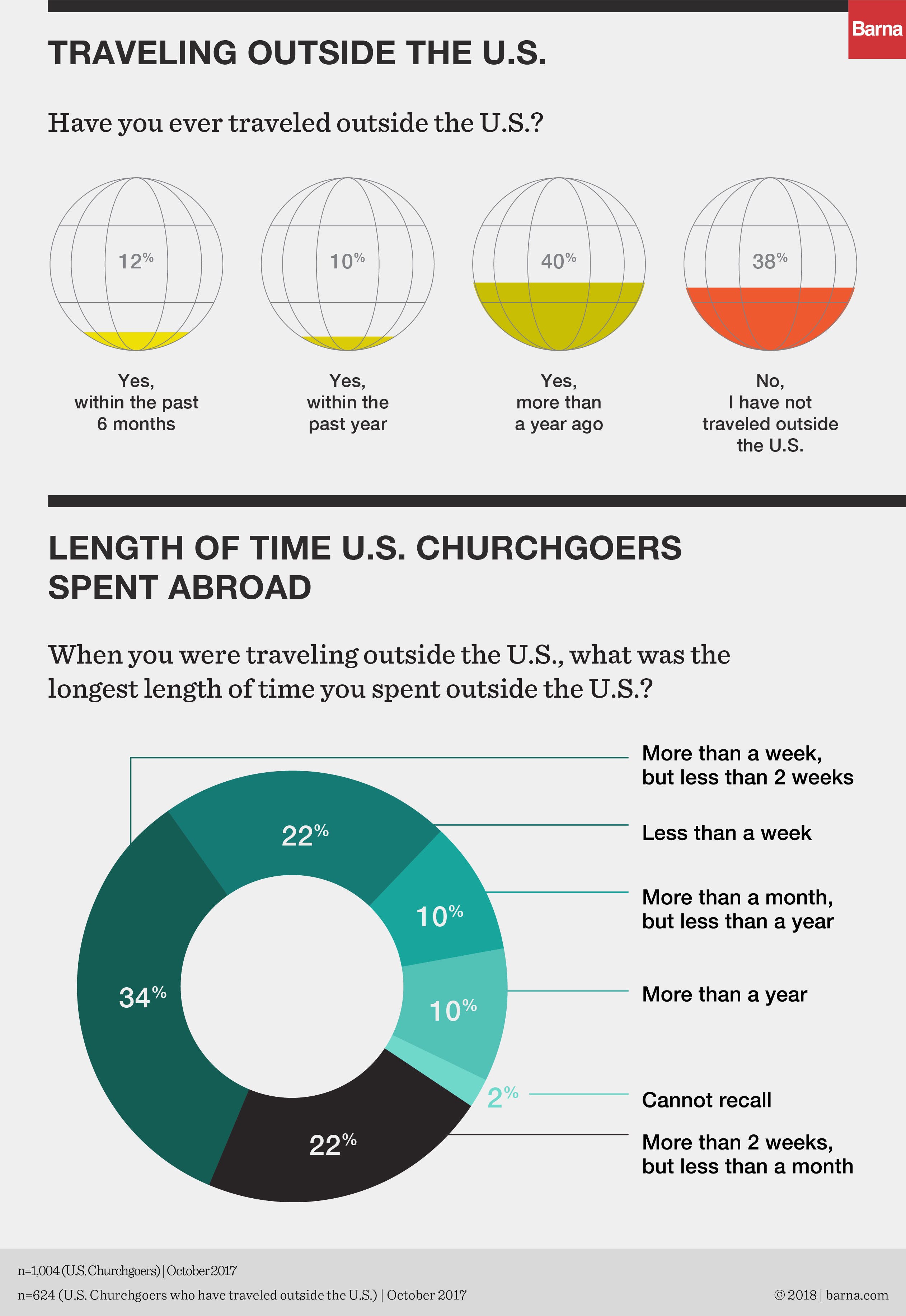 Americans Love Their Country—but Have Some Misgivings
An American churchgoer’s experience with international travel, whether a lot or a little, appears to have some connection to their feelings of pride or shame concerning the U.S. For instance, as recently as last fall, three-quarters of churchgoers (75%) agree that, “generally speaking, the U.S. is a better country than most other countries.” This is just under the national average of 81 percent, though it exceeds the two-thirds of non-Christian U.S. adults (67%) who feel their country is superior. Churchgoers who have traveled internationally for shorter periods of time are more likely than those who have gone abroad for longer periods of time to think that the U.S. is generally better than other countries. That is, less travel is correlated with more pride, more travel is correlated with less pride. Further, churchgoers of an ethnic minority, many of whom may also be able to point to a heritage from other non-Western cultures, are the least likely to agree that the U.S. is a better country than most other countries (33% “strongly” + 33% “somewhat”). 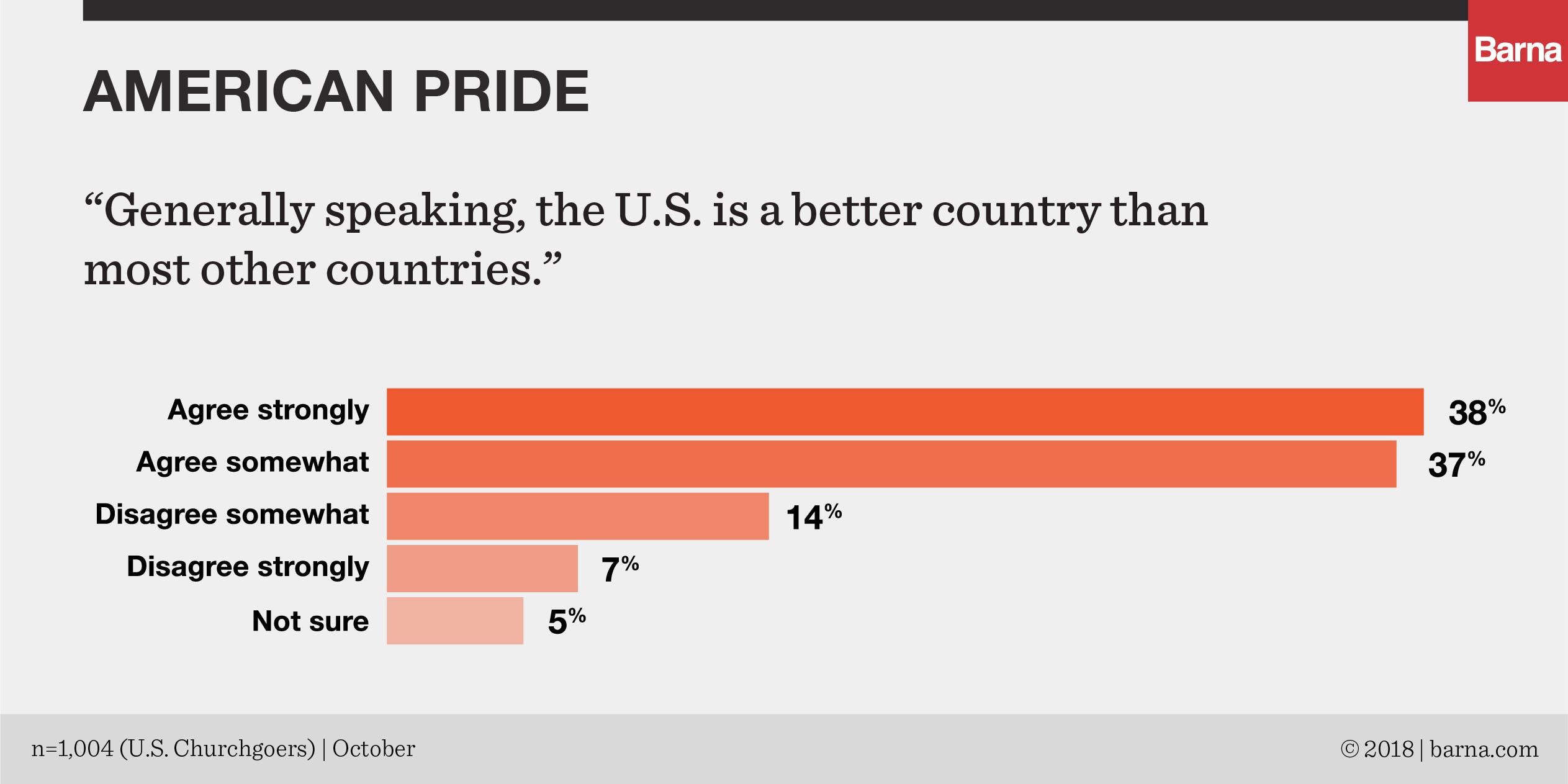 Evangelicals are the churchgoing group that is most convinced (51% “strongly” + 30% “somewhat”) that the U.S. is generally better than other countries. Presumably, this viewpoint is permeated by political sentiments; conservatives make up 75 percent of evangelicals in this study and, as a whole, nearly all conservatives (92%) affirm that the U.S. is exceptional. Some of the reasons they or other Americans may feel their home is so great, according to another Barna study, include the “American dream” (24%), the Constitution (21%), free speech (21%), freedom of religion (20%) or democracy (20%).

An American churchgoer’s experience with international travel appears to have some connection to their feelings of pride or shame concerning the U.S. Click To Tweet

Having a sense of patriotic pride doesn’t rule out other nuanced or even negative feelings about the U.S. In fact, three-quarters of American churchgoers (75%) say there are some things about the U.S. today that makes them feel ashamed. Again, this is slightly less than the national average of 79 percent. Millennials and ethnic minorities are more likely to feel strongly about this. And interestingly, evangelicals—the group with the most American pride—are also the group with the most American shame. 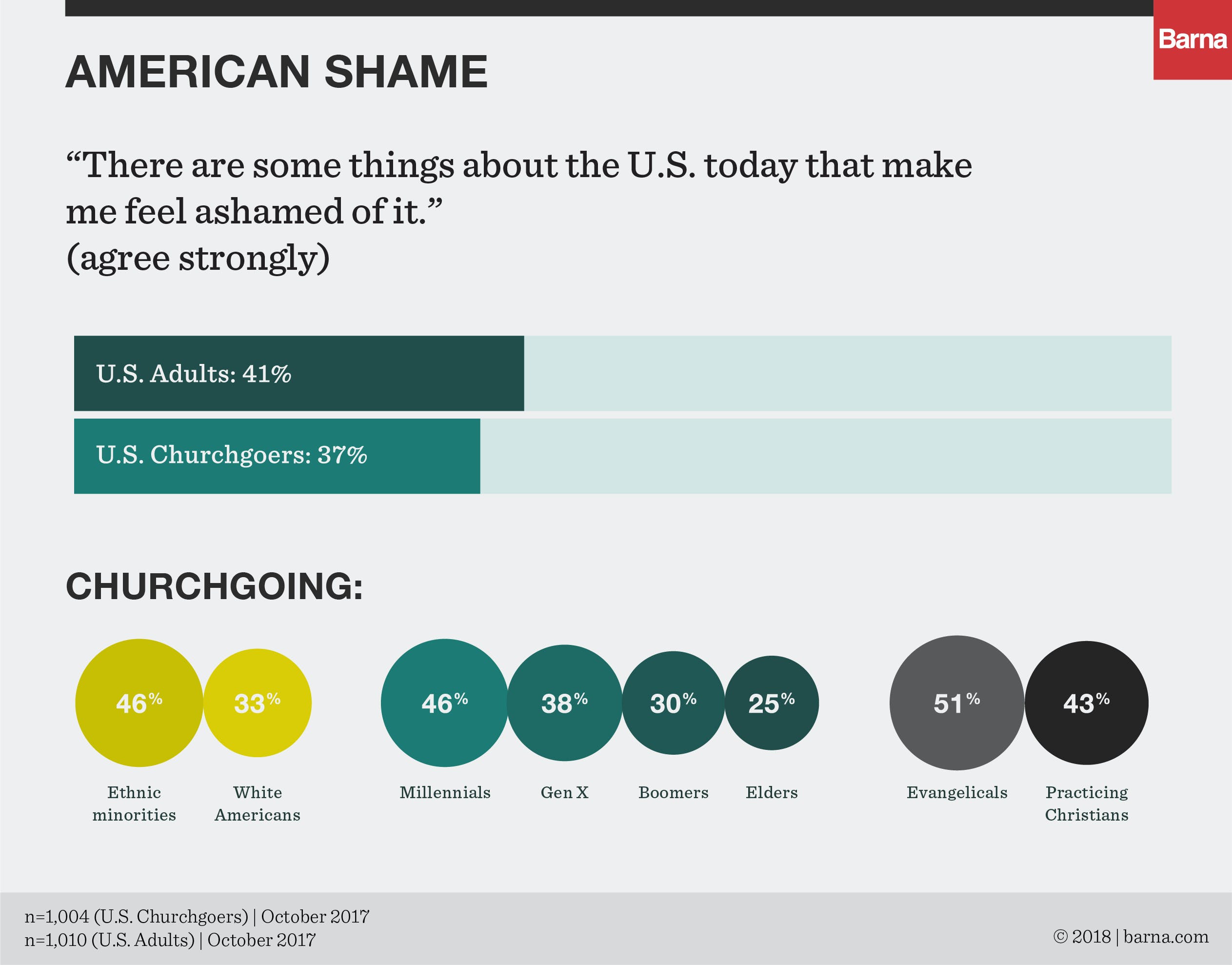 Most Churchgoers Open to Other Cultures
However exceptional churchgoers deem America to be, the vast majority of them (86%) still enjoys learning about other cultures at least somewhat. Eager interest in other cultures declines with age: 54 percent of Millennials agree strongly compared to only 33 percent of Elders. This level of openness correlates to one’s experience abroad (or lack thereof) or length of time spent outside the US. For instance, churchgoers who have never been outside the U.S. are much less likely to enjoy learning about other cultures (41% compared to 66% who have spent between a month and 6 months outside the U.S). 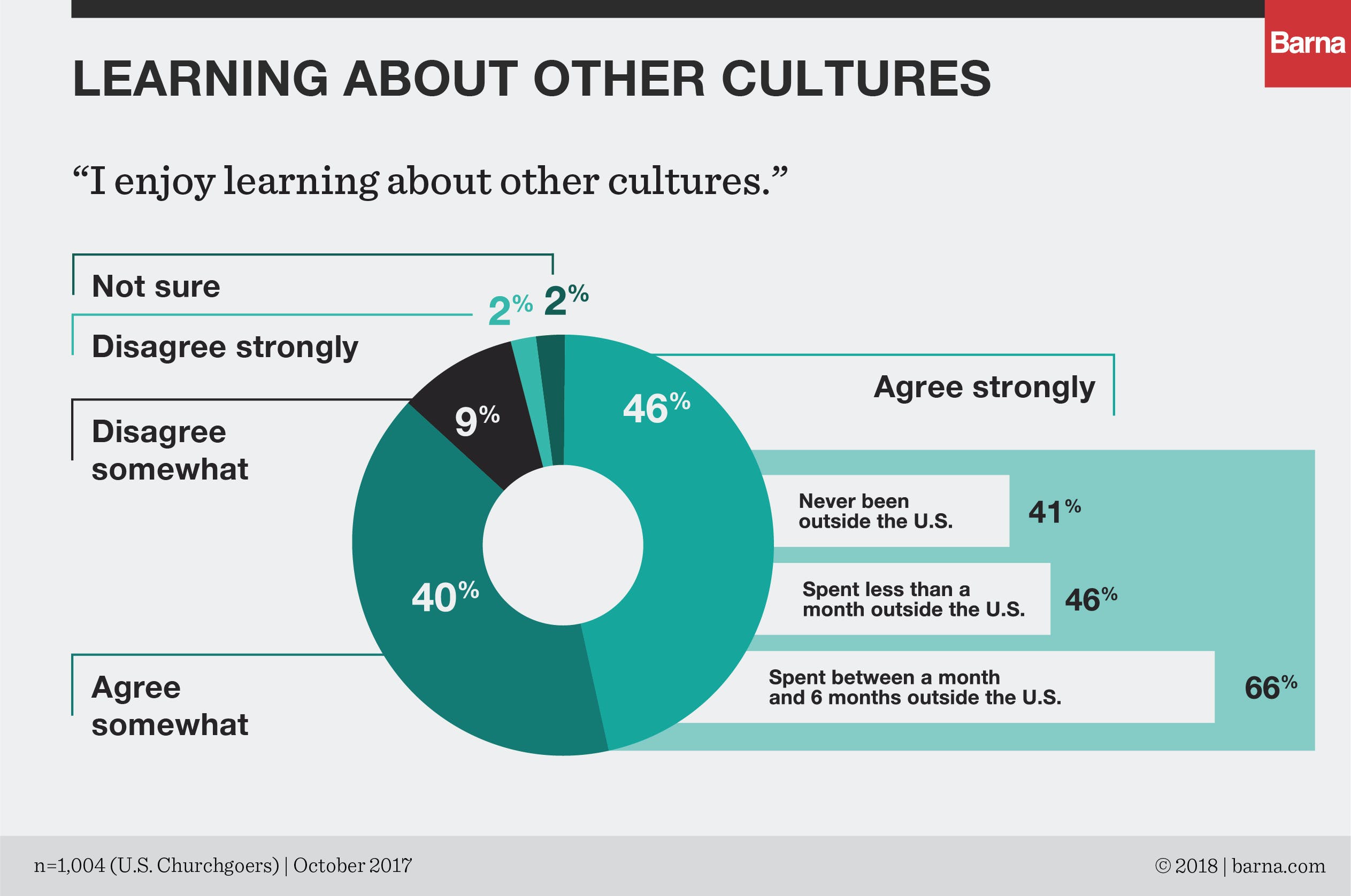 Parents and youth pastors hope to impart a lasting faith to the next generation. In this excerpt from Barna’s Gen Z study, conducted in partnership with Impact 360 Institute, we look at the discipleship interactions that today’s skeptical teens have in the context of two key relationships.