Many churches today are explicitly constructed not to look and feel too much like a religious place. A stark contrast to the ancient cathedrals and churches of old—the very design of which was intended to help people experience the divine. How does this design shift impact worshipers? What about outsiders? What do church buildings say about the faith of those inside? And, when it comes to the next generation of believers—who, leaders worry, will darken the church doors less and less often—does the building itself have anything to do with their resistance or attraction to the church?

To understand the principles of design that best resonate with Millennials, Barna Group partnered with Cornerstone Knowledge Network to conduct a multi-phase research program. First, Barna recruited Millennials from a variety of religious backgrounds to tour urban cathedrals, suburban megachurches, city parks and coffee shops. Along the way Barna’s researchers asked what they did and didn’t like about each space, what they would use different spaces for and how they might change each place if given the opportunity.

After observing these Millennials, Barna better understood the scope of issues confronting churches as they work to optimize their buildings for the next generation. The Barna team then developed an online survey for a nationally representative sample of 18- to 29-year-olds. This survey combined word-driven questions with “visual” polling—asking participants to respond to sets of images—for a unique, in-depth look at what types of spaces Millennials resonate with at home, at church and at work. Additionally, the survey sought to uncover Millennials’ perceptions of Christianity beyond the four walls of the church.

Finding a Place
In this summary, readers can see some of the visual polling from the survey as well as some of the results of the word-comparison poll. These questions focus on the design and aesthetic of church buildings and worship environments. To explore the full scope of the survey—including demographic segmentation, questions on work, home and community, field-test results and insights into how Millennials feel when they visit a church—read the Making Space for Millennials monograph.

The first series showed four images of different kinds of worship spaces and asked which respondents found most appealing. Just under half of participants (44%) selected Sanctuary 2, with the remaining respondents split almost evenly among the other three images. Those who profess a faith other than Christianity (32%) were more likely than average (20%) to prefer Sanctuary 3; this image is devoid of Christian symbols. Sanctuary 2 was the “Goldilocks” space for many respondents—not too big, not too small. Just right. It’s big enough to retain some anonymity as a visitor—the marginally churched (63%) and those who are not practicing Christians (50%) preferred it more strongly than the average—but small enough to feel part of a community. Parents with children under 18 (50%) also preferred Sanctuary 2 more than average.

This pattern squares with feedback from the field groups: For many, size is a necessary evil rather than a selling point. Participants acknowledged that a successful church would grow and therefore need to increase the size of its services and facilities. But they also expressed a bit of tacit distrust for very large churches. One young man put it starkly: “It seems like a really big business.”

Millennials express that their perceived advantage of a large church is the option to blend in, especially for those who are less comfortable visiting for the first time. 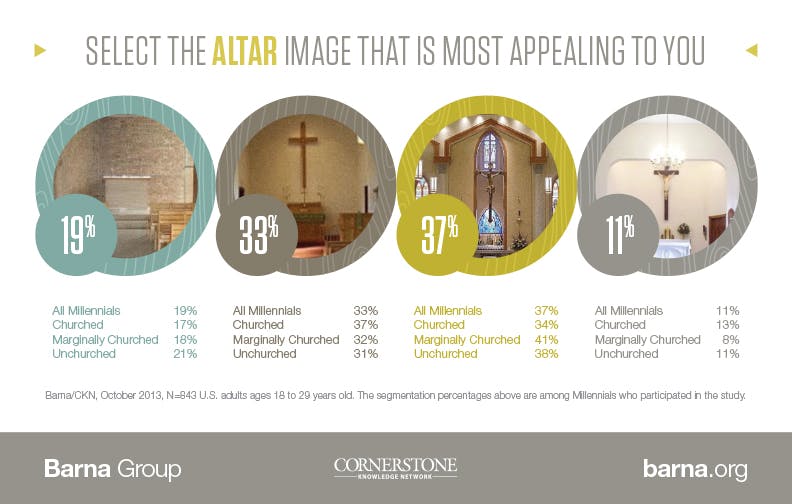 Altars 2 (33%) and 3 (37%) were the overall favorites. Both are unambiguously Christian and are more traditional in appearance than image 4. Analysis of faith and demographic segments reveals a few interesting trends. Nearly half of non-mainline Protestants (48%) preferred Altar 2, with an even stronger preference among evangelicals (55%). By contrast, Catholics (63%) were more likely than average to prefer Altar 3. Half of those professing a faith other than Christianity (51%) found Altar 1 most appealing—it lacks overt Christian iconography—and three in 10 of those with no faith (29%) also chose Altar 1. Both these proportions were much higher than the average (19%).

Looking at ethnic, age and other demographics, Barna found that Hispanic participants strongly preferred Altar 3 (54%), while twice as many blacks (21%) as the national average (11%) found Altar 4 appealing. There seem to be significant regional differences, as well. Midwesterners were more likely to prefer Altar 2 (40%) and Southerners more likely to choose 3 (46%). Married people (30%) and adults ages 25 to 29 (25%) were more likely than average to find Altar 1 appealing.

These patterns illustrate most Millennials’ overall preference for a straightforward, overtly Christian style of imagery—as long as it doesn’t look too institutional or corporate. Not only do such settings physically direct one’s attention to the divine, they also provide a rich context of church history as the backdrop for worship.

The third series of images showed four images of nature brought into or around the church space. Most Millennials preferred images with greater realism and more immersion into the outdoors. Nature 4, the garden path, was the favorite by far, with 62% choosing it as most appealing; a majority in nearly every population segment preferred it. Catholics (74%), those with no faith (70%) and the unchurched (67%) were even more likely than average to choose 4. While just 9% of all adults chose Nature 1—the more child-oriented paper cutout of a tree—one-quarter of evangelicals (24%) and about one in six born-again Christians (17%) found it most appealing. Windows 1 and 4 tied as most appealing, with both garnering 35% of participants’ votes. This is a drastic split; 1 is the most modern, least “churchy” of the images, while 4 is the most ornate and traditional. These survey results are consistent with the field group findings: Millennials like both! During the field test, participants saw a space with both styles of windows in Church of the Redeemer in downtown Atlanta. It has a small prayer chapel with an ornate stained glass image of Jesus at the front, flanked by two large, open windows. The overall effect is pleasing, and was noticed with appreciation by field participants.

Middle-class young adults were more likely (45%) than average to prefer Window 1, as were Midwesterners (41%). This was also the case, by a wide margin, with those adhering to non-Christian faiths (61%). On the other side, Catholics (55%), residents of the West (44%) and Hispanics (44%) were all more likely than average to find Window 4 most appealing. (There is likely significant crossover among these three segments.)

The research also posed a wide range of questions about Millennials perceptions of churches, church buildings and worship environments. When asked to choose between contrasting words to describe their vision of the ideal church, a majority of Millennials chose the following (for more word pairing choices, see the full report): While “Sanctuary,” “classic” and “quiet” are more often associated with traditional church buildings, less than half of survey respondents preferred the word “traditional” over “modern.” And herein lies a cognitive dissonance common to the young adults interviewed in the survey. Many of them aspire to a more traditional church experience, in a beautiful building steeped in history and religious symbolism, but they are more at ease in a modern space that feels more familiar than mysterious.

What the Research Means
“It’s tempting to oversimplify the relationship between Millennials and sacred space,” says Clint Jenkin, Ph.D., vice president of research at Barna Group and the lead designer of this study. “For instance, it might be easy to believe such a place needs to look ultra modern or chic to appeal to teens and young adults. But the reality, like so much about this generation, is more complicated—refreshingly so. Most Millennials don’t look for a church facility that caters to the whims of pop culture. They want a community that calls them to deeper meaning.”

“There are myriad ways to design sacred and communal spaces that call people of all ages to deeper relationships with God, self and others.” Jenkin continues. “No two churches will (or should) incorporate them all in the same way. There is no cookie-cutter, mass-production solution for welcoming Millennials to your space.” But, Jenkin says, there are questions your community can keep in mind as you build to include the whole church body. He suggests gathering your leaders—and key members of your church body, including Millennials—to discuss questions such as the following:

About the Research
The Millennials and Architecture Survey was commissioned by Cornerstone Knowledge Network.

Field Groups
The focus groups were conducted on August 26 and 27, 2013 in Atlanta, Georgia, and Chicago, Illinois. In each city, 10 adults ages 18 to 29 were recruited to participate by a local research recruiting firm. They were told that the groups were about religion and architecture, but that no background in either was required. Participants were screened from a variety of religious backgrounds, including practicing Christians, non-practicing Christians and non-Christians, and came from a range of racial and ethnic backgrounds, including black, white, Hispanic and Arab. Each group had at least three male participants.

On August 26, the Atlanta group toured Buckhead Church, Lutheran Church of the Redeemer, Centennial Park and a local Starbucks. On August 27, the Chicago group toured Willow Creek Community Church (Barrington), St. James Episcopal Cathedral, Millennium Park and Intelligentsia Coffee. At each location the participants were asked how they perceived each space, and how they would use it. They were also asked general questions about religious facilities and their perceptions of Christian churches. Each group lasted approximately six hours. All participants were compensated for their time.

National Survey
The Barna/CKN Millennials and Architecture survey included 843 online surveys conducted among adult residents of the United States ages 18 to 29. The survey was conducted from October 10 through October 15, 2013. The margin of error for a sample of this size is plus or minus 5.2 percentage points, at the 95% confidence level.

The response rate for this study was 38%. Email reminders were sent out to non-responders on day three of the fielding period. In every survey there are a variety of ways in which the accuracy of the data may be affected. The response rate is one such potential cause of error in measurement; the lower the response, the less representative the respondents surveyed may be of the population from which they were drawn, thereby reducing the accuracy of the results. Other sources of error include question-design bias, question-order bias, sampling error and respondent deception. Many of these types of errors cannot be accurately estimated. However, having a high cooperation rate does enhance the reliability of the information procured.

How has the turn away from religion affected Millennials' views of the bible?