As Americans prepare to honor those who have served in the U.S. Armed Forces on Veterans Day (November 11), new Barna data explores the presence of faith in the military. Specifically, a survey conducted in partnership with American Bible Society examines views of Christians, the Bible, America and self-identity among Bible Friendly and Bible Neutral members of the military (see methodology below for definitions). These two groups include respondents who are serving or have served in the Army, Marine Corps, Navy, or Air Force.

(This, and other new research, will be covered in the upcoming edition of Barna Trends, examining the intersection of faith and culture.)

Military Perceptions of Christians
Many military members are in community with Christians, and often serve alongside them. Among those in the military who say they know faithful Christians (76%), almost eight in 10 (78%) say they know such individuals in the military. Only 5 percent don’t know any Christians at all. The majority says they have a very positive (55%) or somewhat positive (30%) perception of the believers that they know (military or not). 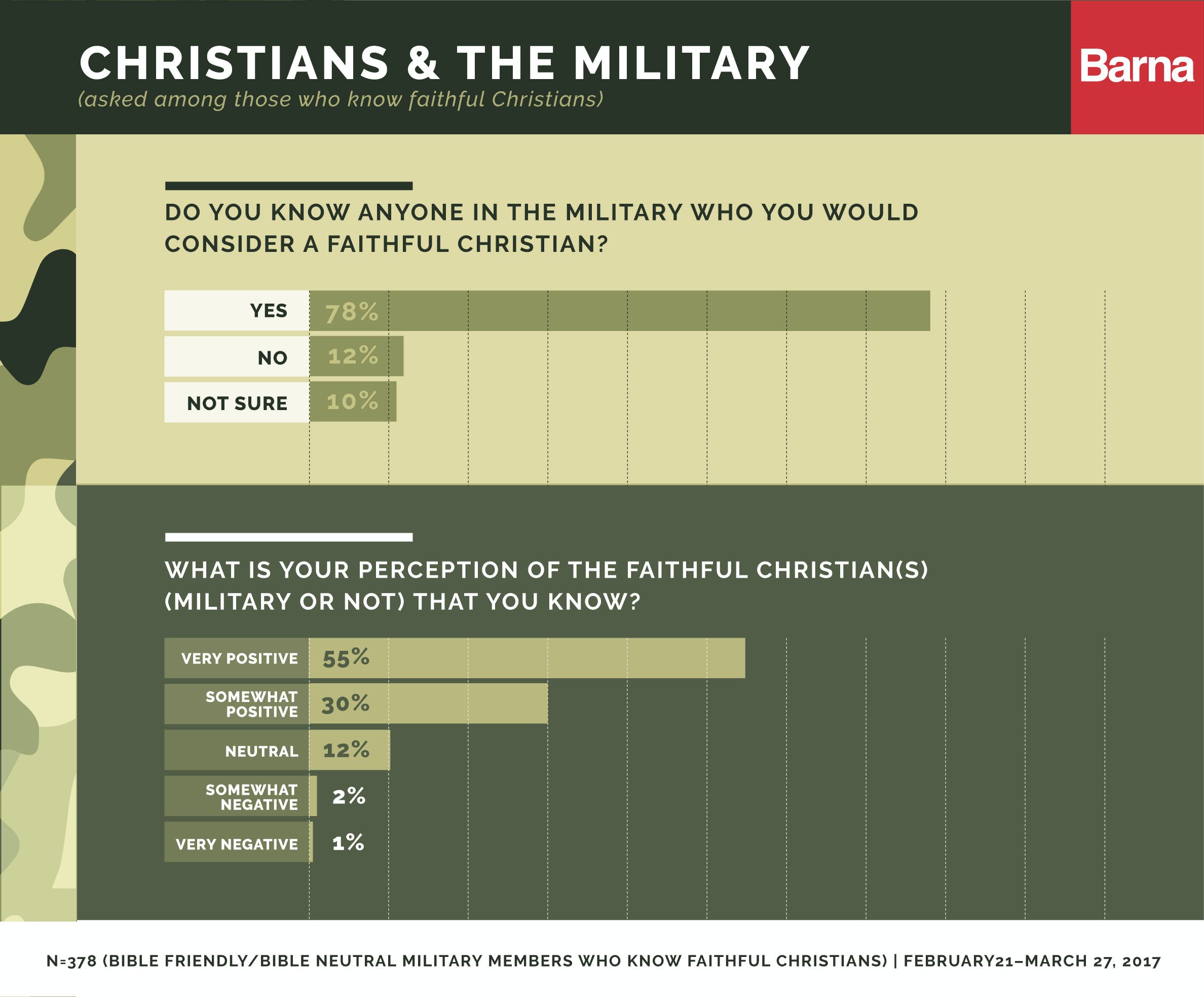 Members of this military sample usually say that the Christians in their lives represent the Bible’s ideals either “very” (26%) or “somewhat” (46%) well. One-quarter doesn’t feel like their Christian peers are a strong scriptural example (20% “not that well” + 4% “not at all”). Eight in 10 (81%) have engaged in a conversation with a Christian about their beliefs in God or Jesus, and those conversations are overwhelmingly positive, leaving people feeling affirmed (31%), inspired (29%), curious (26%) or uplifted (23%). 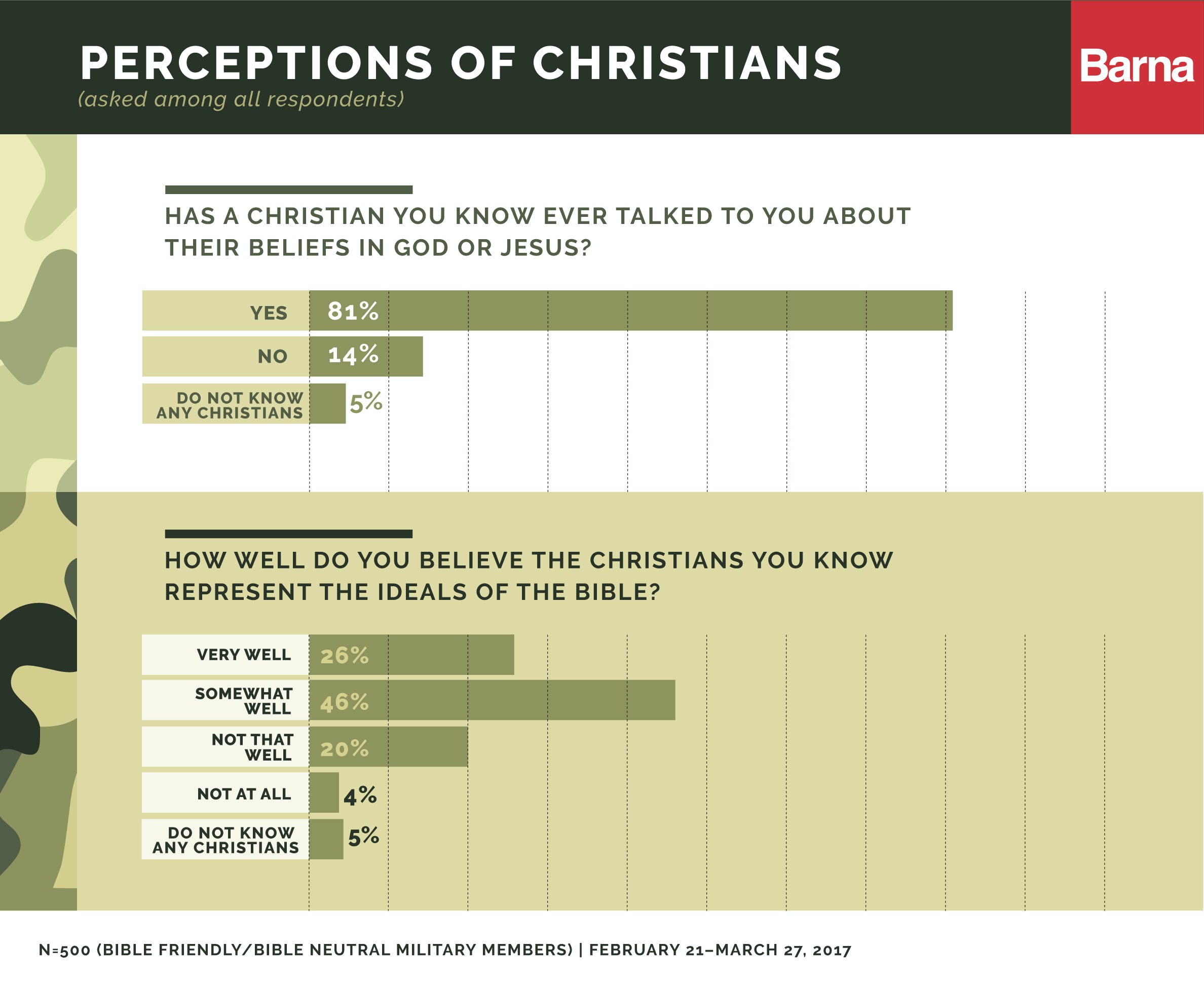 A plurality of those in the military feels the Bible has too little influence in America. Click To Tweet 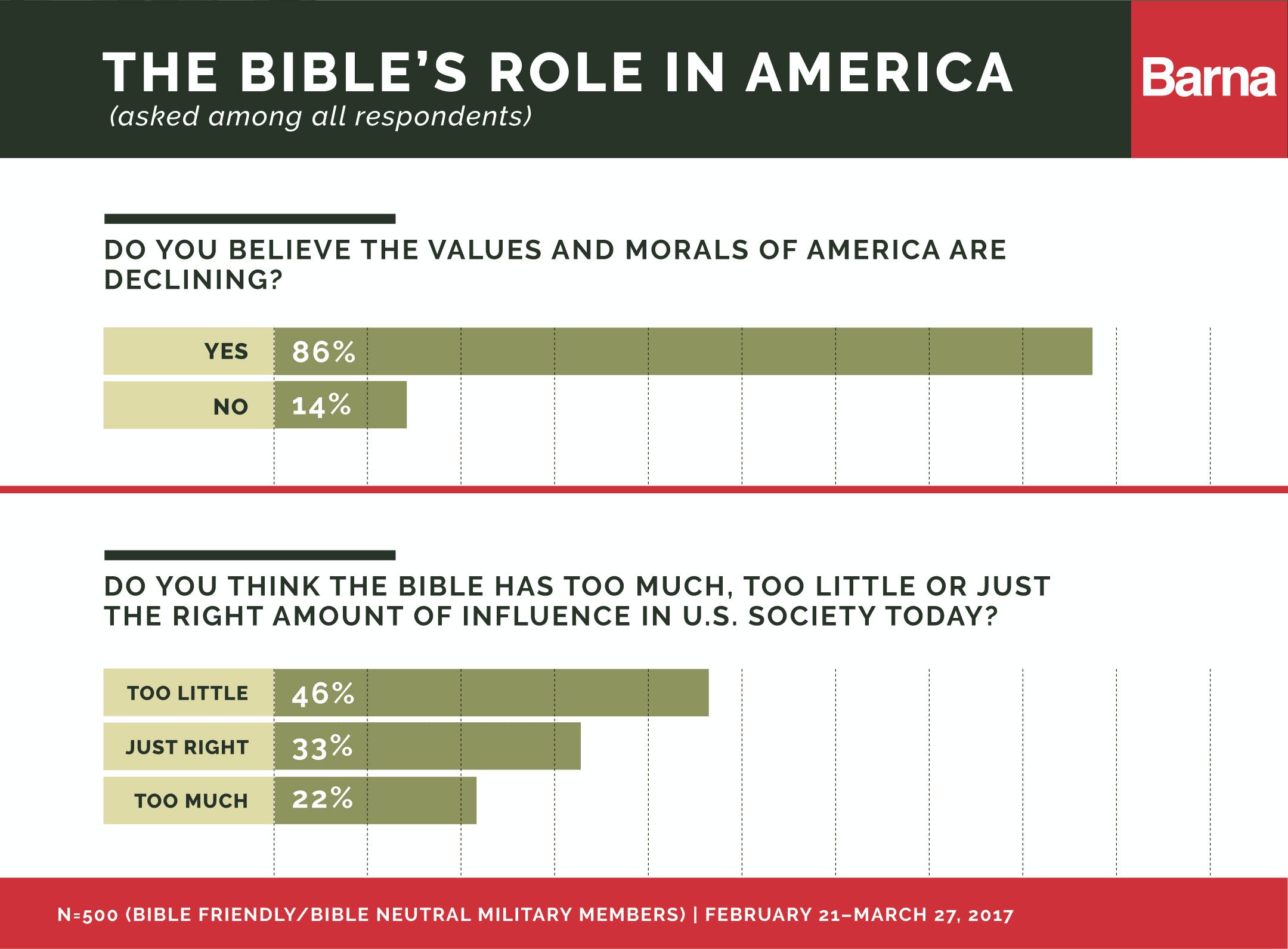 Non-Bible Readers in the Military Open to Finding Comfort in Scripture
Turning to the scriptures isn’t just seen as a prescription for American society; it’s something non-Bible readers are also open to. Service men and women who read the Bible infrequently or not at all say they might read the Bible for many reasons, but the most common is for comfort (37%), and understandably so, given the peace or security its pages may bring to those taking great risks for their fellow Americans. It also comes as no surprise that turning to the scriptures during a deployment is next on the list (30%). Seventeen percent say they might look to the Bible when separated from family, an unfortunate reality service members face when deployed. Others mention turning to scripture if they have a problem they need to solve or desire direction (30%) or simply to be closer to God (28%). Few say they would approach scripture out of a sense of obligation (14%). 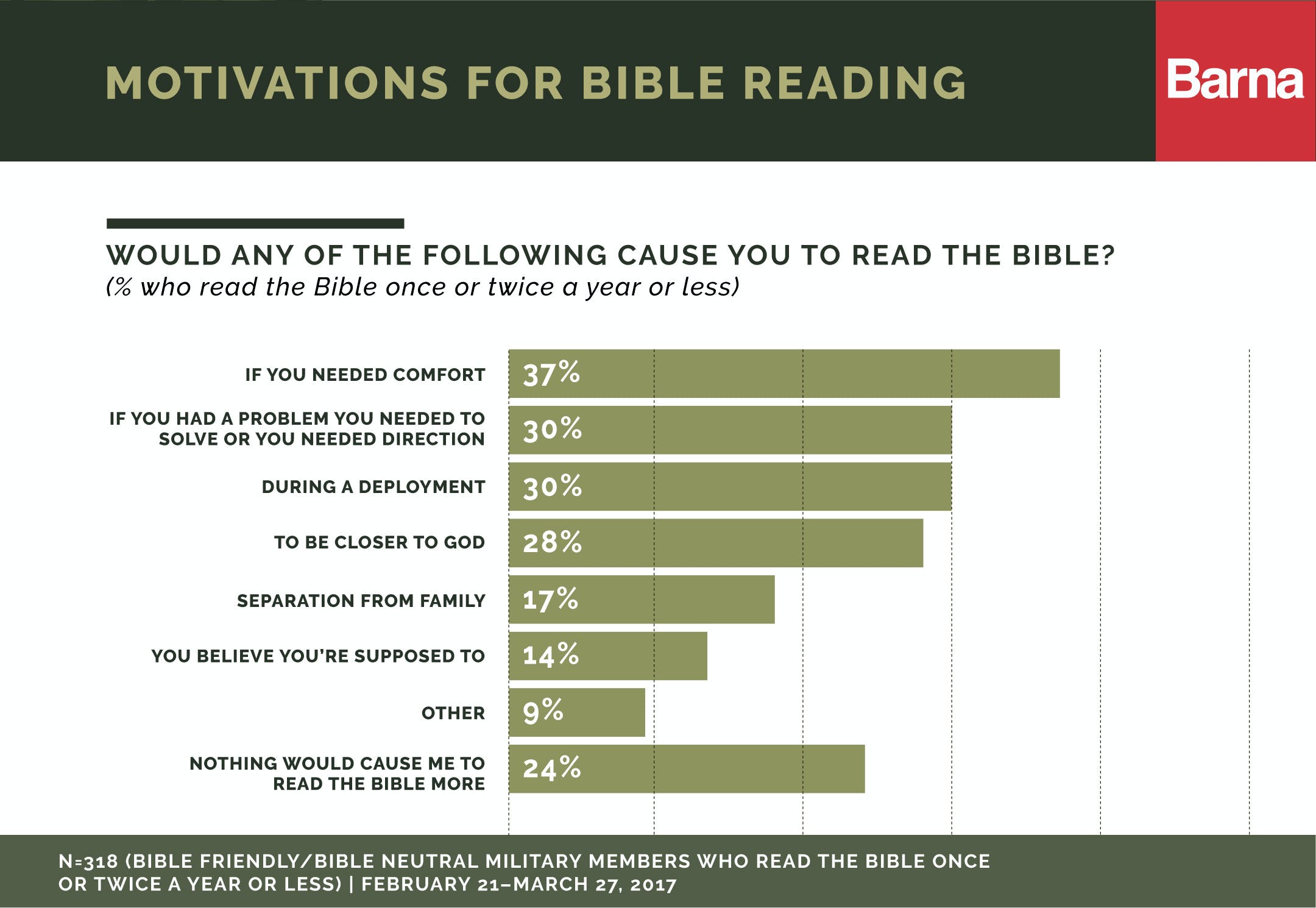 The Latest Research on the Bible in America

A plurality of the entire group holds an orthodox view of the Bible, defined as the belief that the Bible is the inspired word of God and has no errors, although some verses are meant to be symbolic rather than literal (35%). A smaller percentage (14%) believes the Bible is the actual word of God and should be taken literally, word for word. Two-thirds (66%) at least somewhat agree that the Bible contains everything a person needs to know to live a meaningful life. 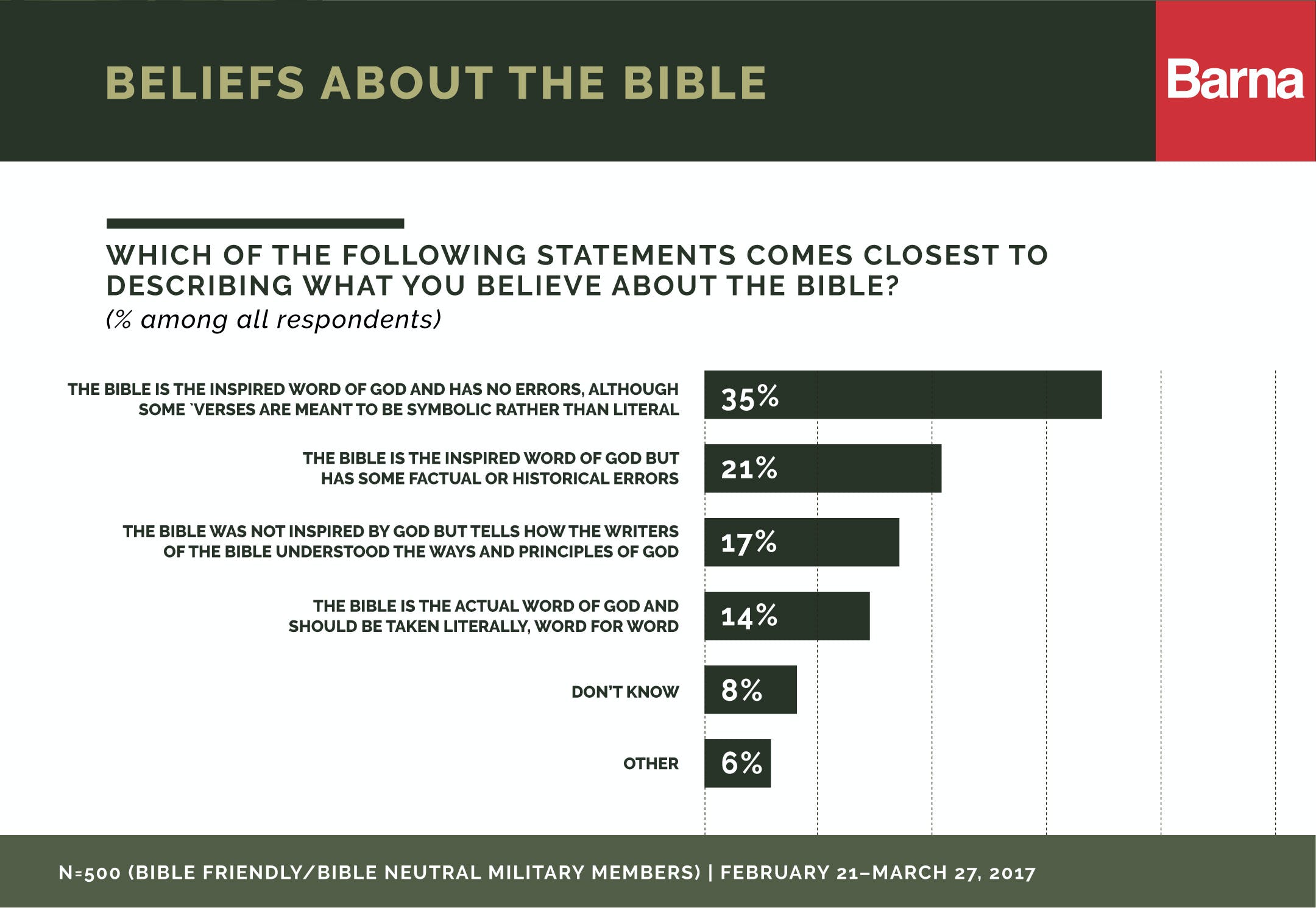 Military Service Shapes Identity
The bonds formed in battle and the life-changing experiences of men and women in the military are so profound that the profession becomes central to their sense of self. Most respondents say their military profession is the most important foundation for their identity (53%). Next on the list is their country / American heritage (52%), often a motivation of military service, followed by their family background (51%). These three are the most common choices, but respondents also say their hobbies / pastimes (37%) help form their sense of self. Race / ethnicity (32%) and religion (31%) rank lower on the scale of self-identifiers, alongside friendships (30%). Political affiliation (18%) and social social status (16%), though difficult to separate from the dynamic and mission of the military, are at the bottom of the list. 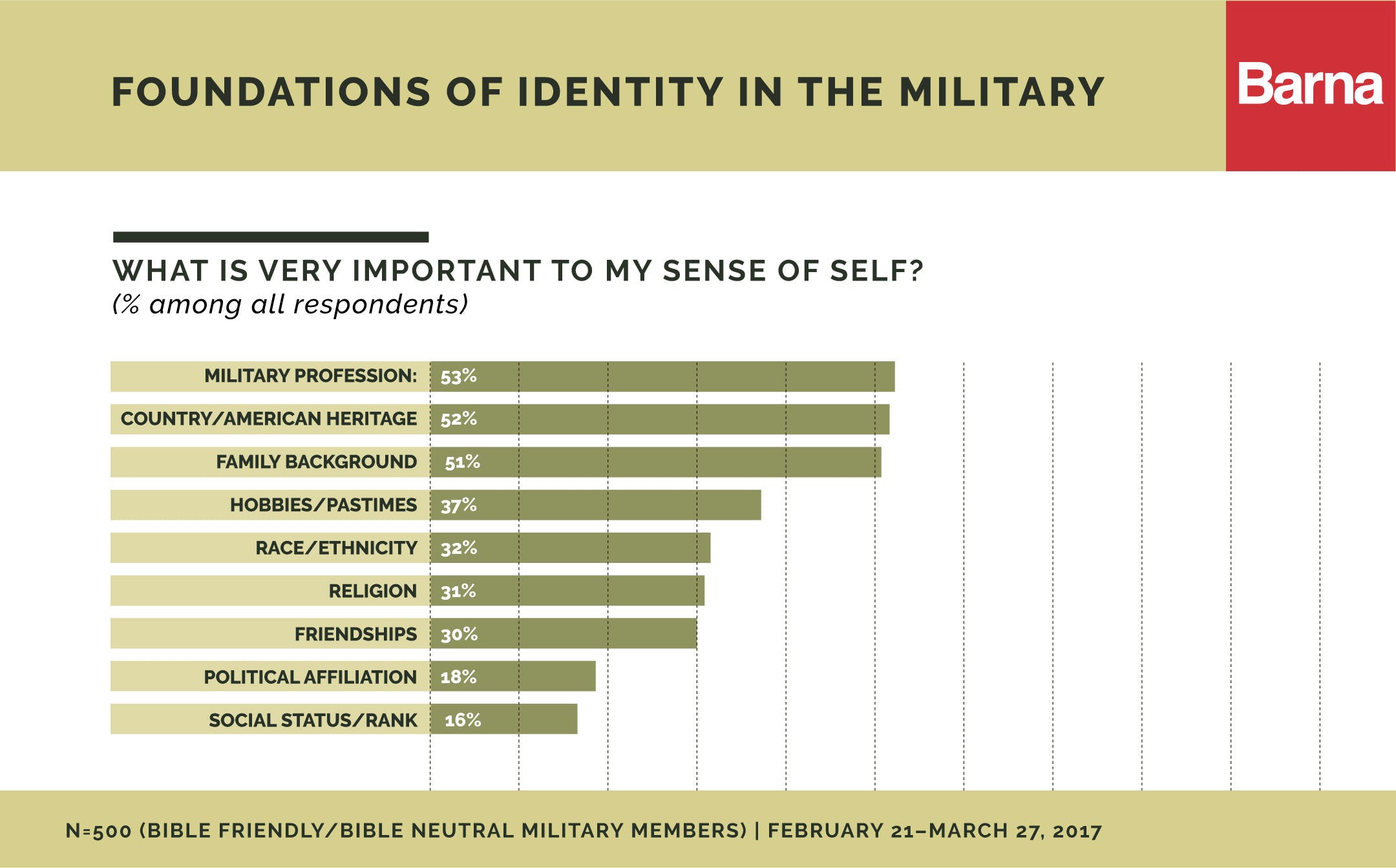 About the Research
This study was conducted online from February 21–March 27, 2017 among a total of 500 Bible Friendly and Bible Neutral members of the United States Military. The research included interviews with 400 active or reserved members and 100 retired or discharged members. The four main branches (Army, Marine Corps, Navy and Air Force) were included. The sample error is +/- 4.3 percentage points at the 95% confidence level.

Bible Friendly: View the Bible as a) the actual or b) the inspired word of God with no errors. Read, use or listen to the Bible fewer than four times per week

Bible Neutral: View the Bible as the inspired word of God but has some factual or historical errors OR not inspired but tells how the writers understood the ways and principles of God. Read, use or listen to the Bible one time a month or less