Recently, Barna released a landmark study of Gen Z, in partnership with Impact 360 Institute, providing a snapshot of the ways Gen Z sees the world, their faith (or lack thereof) and our culture. The research was unveiled at a live event on January 23rd in Atlanta, Georgia, accompanied by a national webcast. Throughout the event, as a team of experts and youth practitioners unpacked the data, we asked for viewers to submit their own questions about Gen Z via twitter using the hashtag #whoisgenz. We received an overwhelming response and weren’t able to get to all of them at the time. So, whether you missed the livestream altogether (watch the replay here before it expires on Feb 10) or are simply still hoping for a response, we’ve decided to address some of your most common and burning questions about the next, next generation right here. But this is just a sneak peek at the larger research study, which is now available for purchase.

1. Who counts as Gen Z? Are the youngest of Gen Z in the study?
Barna has been studying generations for three decades, beginning with Boomers (born 1946 to 1964), then focusing on Gen X (born 1965 to 1983) and Millennials (born 1984 to 1998). We’re now turning our attention to the next generation: Gen Z. Barna defines this new generation as those born between 1999 to 2015, but for the purpose of this study only teenagers (those between the ages of 13 and 18) were included. Because of that, the results are reflective only of the leading edge of Gen Z. As a whole, their views may shift as younger members of the generation come of age, but for now, this study represents the views of Gen Z teenagers in America.

Another common question we’ve received is how to distinguish between generational and life-stage differences when interpreting broader trends. The truth is that the research will reveal both. Priorities change as one advances through life. For instance, education and friendships tend to be more important at a younger age, and career and family become more important as Americans head into adulthood, with retirement and leisure often becoming central at an older age. So, some of the trends we are seeing may simply be a result of Gen Z’s early life stage. However, this is the first picture of this new generation—and we are surprised by how fast things are changing. The world in which Gen Z are coming of age is vastly different from that of, say, Boomers. Technological advancements, demographic changes, an increasingly post-Christian environment and political realities have contributed to radical cultural shifts in the last 50 years, and the findings reflect that.

2. What were the main ethnic differences among Gen Z?
Gen Z is the most diverse generation we’ve observed in American history. Given this, a few key differences are evident between and among ethnic groups. For instance, Gen Z racial minorities are substantially more likely than white teens to consider their race or ethnicity important to their sense of self. When it comes to perceptions of the church, African American and Hispanic teens are more likely to choose (from a number of options) church-themed activities or icons that have a more communal feel and greater diversity as opposed to white teens. Also, white teens—who tend to benefit from households of greater wealth and comfort, on average—are more likely than black and Hispanic young people to say they are not excited to grow up (32% vs. 15% black teens, 26% Hispanic teens). White and black teens are more likely than Hispanic young people to report often interacting with people who are different from them (43% white, 38% black vs. 29% Hispanic teens), which black teenagers especially enjoy (28% vs. 15% white, 21% Hispanic teens strongly agree they enjoy spending time with people who are different from them). 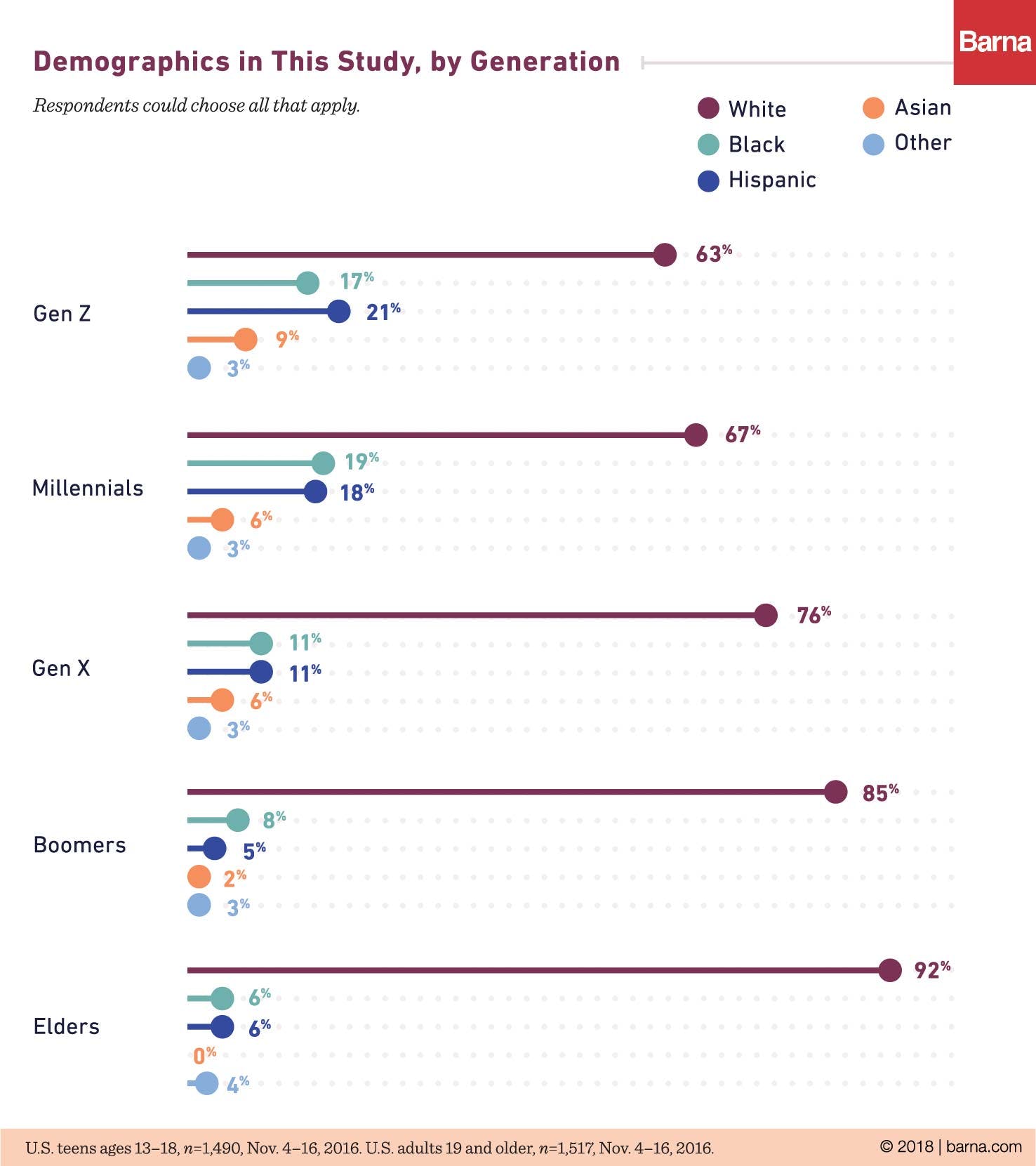 3. What were the differences between Christian and non-Christian Gen Z?
One of the main findings from the study is that the problem of evil is a major barrier to faith for non-Christian teens (29%). Other reasons nonbelievers provide as common barriers to faith include “Christians are hypocrites” (23%), “I believe science refutes too much of the Bible” (20%), “I don’t believe in fairy tales” (19%), “there are too many injustices in the history of Christianity” (15%), “I used to go to church but it’s just not important to me anymore” (12%) “I had a bad experience at church / with a Christian” (6%). Interestingly though, the perceived conflict between science and Christianity is also a factor for Christian teens. More than one third of engaged Christian teens (37%) and more than half of churchgoing teens (53%) say that the church seems to reject much of what science tells us about the world.

When it comes to church specifically, non-Christians and self-identified Christians have different reasons for why they believe it is unimportant. Among those who say attending church is not important to them, three out of five Christian teens say “I find God elsewhere” (61%), while about the same proportion of non-Christians says “church is not relevant to me personally” (64%). The non-Christians’ most popular answer makes sense (they’re not Christians, after all), but Christians’ reasoning is an indicator that at least some churches are not helping to facilitate teens’ transformative connection with God. 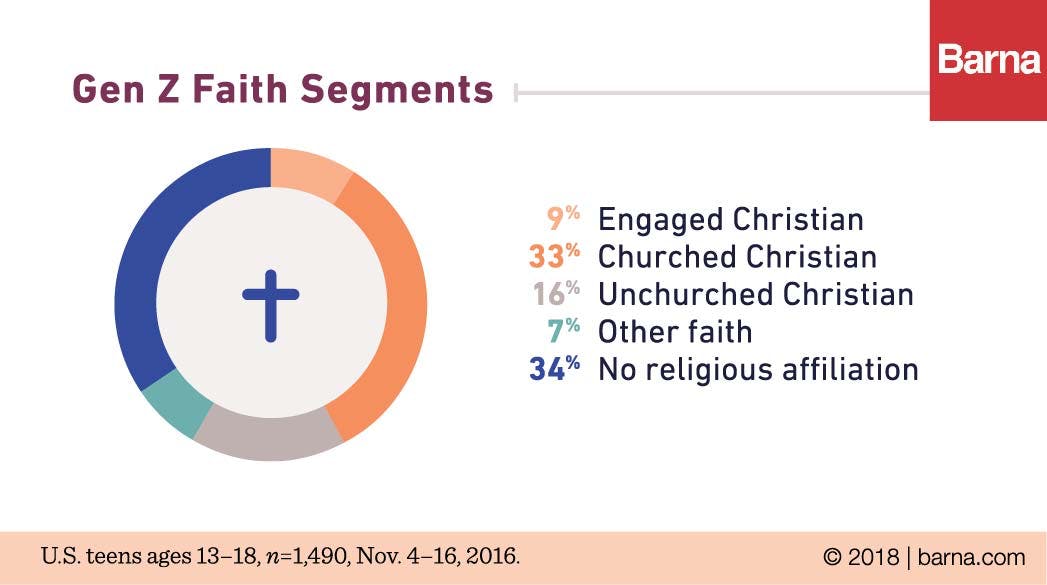 4. It appears that Gen Z are de-prioritizing family. Why is this the case?
One of the biggest and most surprising shifts is that family is not a major priority for Gen Z. For instance, personal achievement, whether educational or professional (43%), and hobbies and pastimes (42%) are more central to Gen Z’s identity than family background / upbringing (34%). By comparison, all other generations rank family at the top.  Religious belief is also less influential, having dropped down the rankings compared to other generations. Another interesting finding is that two-thirds of Gen Z want to finish their education (66%), start a career (66%) and become financially independent (65%) by age 30, while only one in five wants to get married by then (20%). However, they do still seem to value their family’s authority or insight: When asked who they most look up to as a role model, half say their parents and one in seven says another family member. Also, the current life-stage of teenagers must be taken into account, which means that marriage and children are likely a distant thought. That said, it is a diminished priority for Gen Z, even compared to Millennials. It’s not yet clear if this refocusing of identity away from family is the continuation of a descending generational trend, or if Gen Z will gain a deeper appreciation for the influence of their family of origin as they leave the nest. Time will tell. 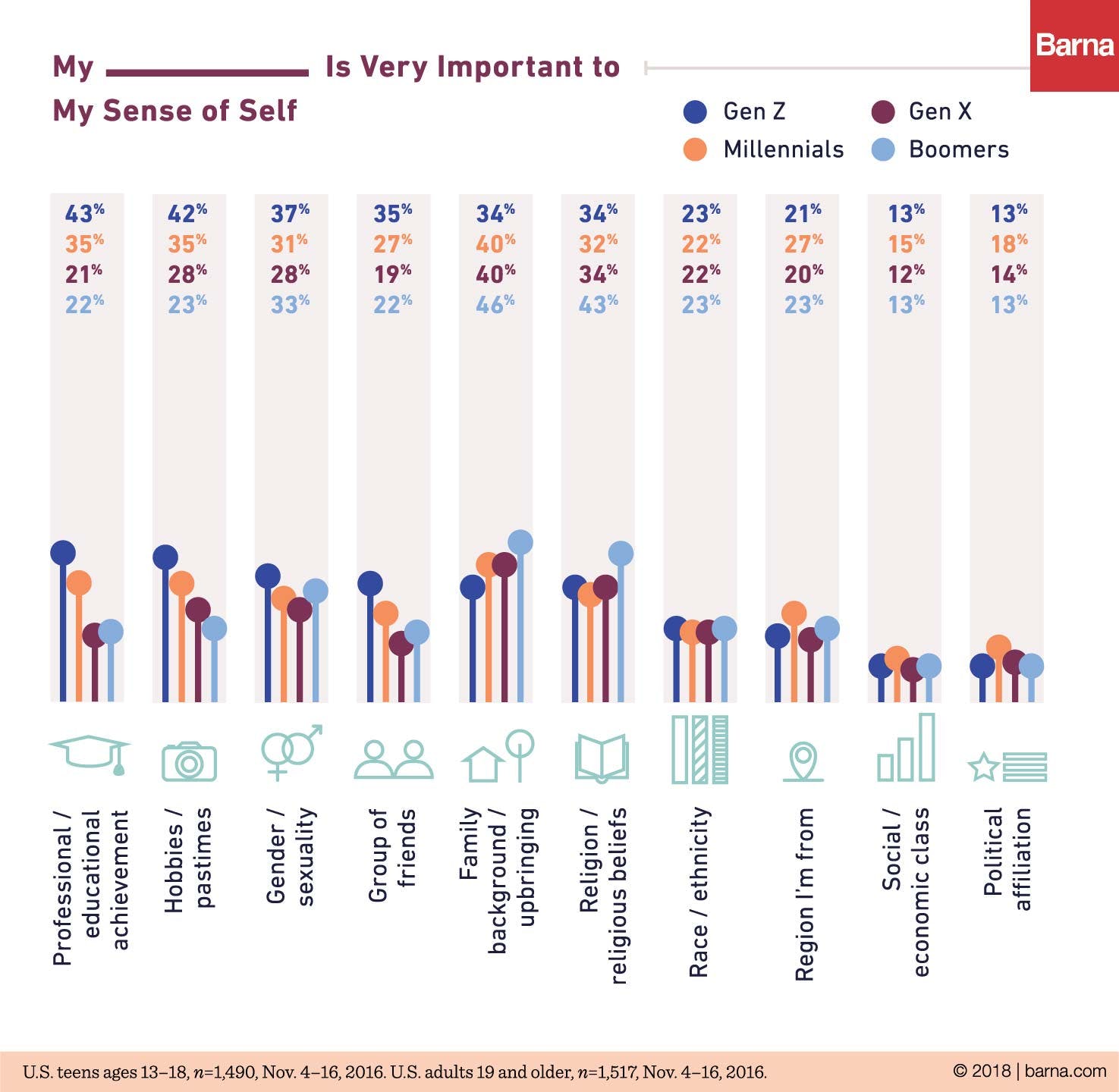 Gen Z says educational or professional achievement are more central to their identity than family. Click To Tweet

5. How can the church effectively disciple this generation?
As we saw above, Gen Z are incredibly career-driven and success-oriented. Achievement is big for Gen Z, both to their sense of self and for their ultimate goals, particularly their education, career and achieving financial independence. Barna believes this emphasis on career presents an opportunity for the church to engage in what could be called “vocational discipleship.” This means teaching young people about the integration of faith and occupation, helping them to better understand the concept of calling and emphasizing the meaning and theological significance of work (not just their potential for professional or financial success). Not every church member has children, but almost every church has a children’s ministry. Almost every church member has a job, but very few churches have a faith and work ministry. The church has an opportunity to reach this next generation of teenagers through integrating career, work and calling into their discipleship efforts.

Quantitative
Two nationally representative studies of teens were conducted. The first was conducted using an online consumer panel November 4–16, 2016, and included 1,490 U.S. teenagers 13 to 18 years old. The second was conducted July 7–18, 2017, and also used an online consumer panel, which included 507 U.S. teenagers 13 to 18 years old. The data from both surveys were minimally weighted to known U.S. Census data in order to be representative of ethnicity, gender, age and region.

Three hundred thirty-five U.S. Protestant youth pastors were also interviewed. Members of Barna’s pastor panel who identify as the person who has direct responsibility for the church’s ministry to middle- or high-school students were invited to participate in an online survey, conducted November 16, 2016–January 17, 2017.’

Four hundred and three engaged Christian parents were also surveyed. To qualify for participation, parents had to 1) identify as Christian, 2) be the parent of a child ages 13 to 19, 3) have attended a church service in the past month and 4) qualify as an “engaged Christian” under the definition designed for this study (see below). The survey was conducted using an online consumer panel November 8–16, 2016.

CHURCHED CHRISTIANS identify as Christian and have attended church within the past six months, but do not qualify as engaged under the definition below.

Photo by Cole Hutson on Unsplash

Meet Generation Z: The first truly “post-Christian” generation. Barna conducted a major study to examine the culture, beliefs and motivations shaping young people in the U.S. and found that the percentage of 13- to 18-year-olds who identify as atheist is double that of the general population. In this release from the new report, we take a look at Gen Z’s views on faith, truth and the church.