From the hurricanes that have ravaged regions along the Caribbean and the Gulf of Mexico to the earthquake that rocked Mexico, the last month alone has left many communities in dire need. Like always, Americans have responded with generosity, but whether you jumped on a plane to volunteer on the ground, or gave directly to a local charity might have a lot to do with the generation you belong to. According to The Generosity Gap, a new Barna report produced in partnership with Thrivent Financial, there are some significant gaps among the generational groups on what counts as generosity, how it’s practiced and its overall importance among life’s competing priorities.

What Is a Generous Act?
While there is broad agreement about the spirit of generosity, people differ when it comes to envisioning an act of generosity. “Service” (32%) and “emotional / relational support” (30%) are the two most popular responses among American Christians when asked what actions they associate with the concept of “giving to others.” About one in five says giving money (22%), while fewer say “hospitality” (12%) or “gifts” (5%). Surprisingly, donating money is third on the list, and only one-fifth of adults selects it as their top expression of “giving to others.” The findings on this question reveal some interesting gaps by generation: Millennials, for example, are on par with the norm when it comes to service, emotional or relational support and gifts. But the percentages for money (13% vs. 22% all Christians) and hospitality (21% vs. 12%) are essentially flipped: Millennials prioritize hospitality far more than money as an expression of generosity. At a different extreme are Elders, who are much more likely than the average to strongly associate service with generosity (52% vs. 32% all) and not at all likely to choose hospitality (less than 1 percent of Elder respondents chose this option). 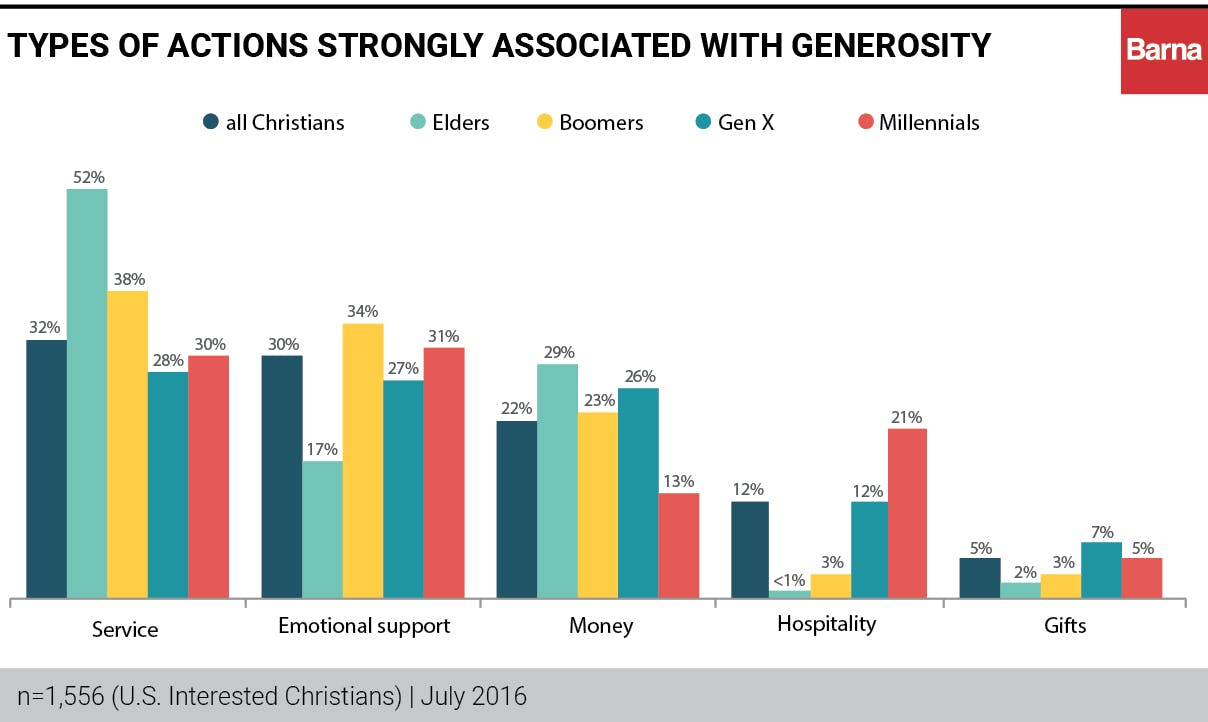 Preferred Acts of Generosity
Researchers found that people most strongly associate their own chosen means of expressing generosity with their ideal of generosity. That is, if they believe monetary giving is the best way to be generous, they give money. If they believe serving is the best way, they tend to give through acts of service. Three out of five people who practice generosity by offering emotional or relational support to others generally associate acts of relational support with generosity. Serving or volunteering and offering relational support are the most common expressions of generosity across generations, but percentages vary, likely related in some instances to free time and financial situation. Elders, for example—many of whom are retired or no longer working full time—are the age cohort by far most likely to report expressing generosity in service or volunteerism. And Millennials, who tend to have fewer overall financial resources, are least likely to say they most often express generosity through monetary giving. 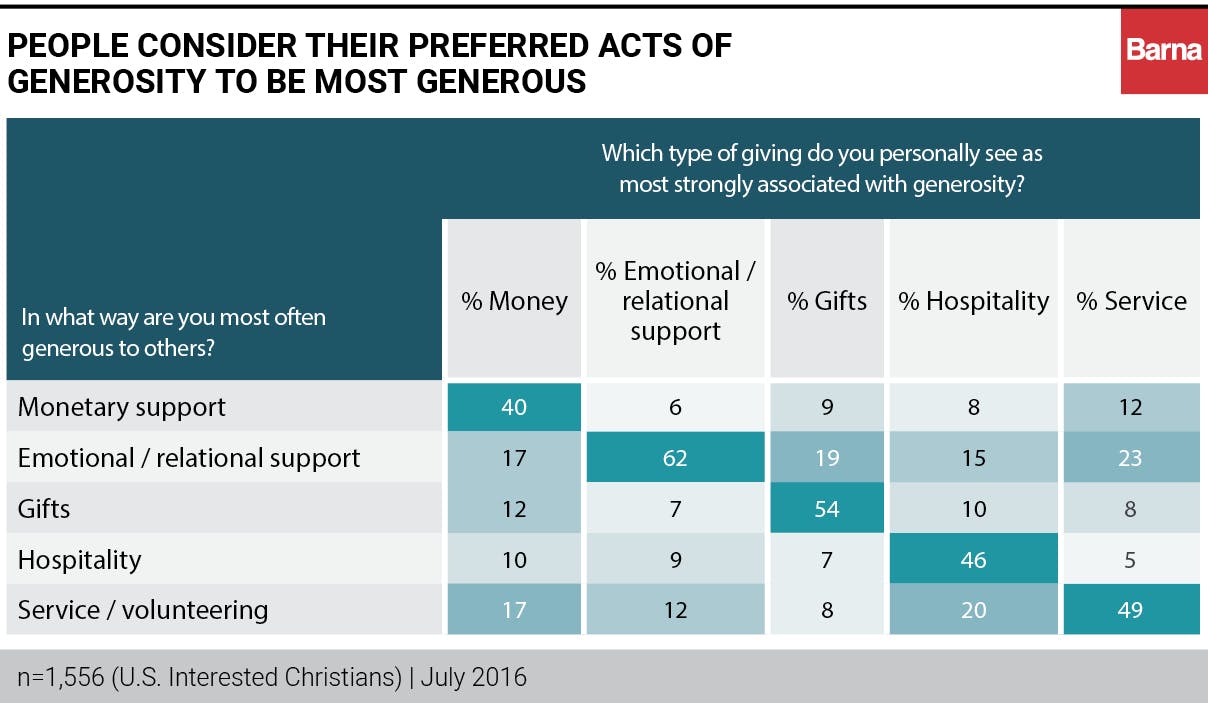 Self-Reported Donations
Though Americans prefer to serve others more than pull out their wallets, financial giving remains the easiest to measure. When asked to self-report their donations for the past year, the data revealed some interesting differences that matched expectations for age, churchgoing habits and marital status. For instance, younger adults tend to earn less money, to attend church less often (or not at all) and to be unmarried—and 84 percent of Millennials report donating less than $50 during the past year, more than twice the percentage of Elders who say so (37%). However, even though middle-aged and older adults tend to earn more, to attend church more often and to be married, their self-reported giving is only slightly higher than what one might expect, given these factors. 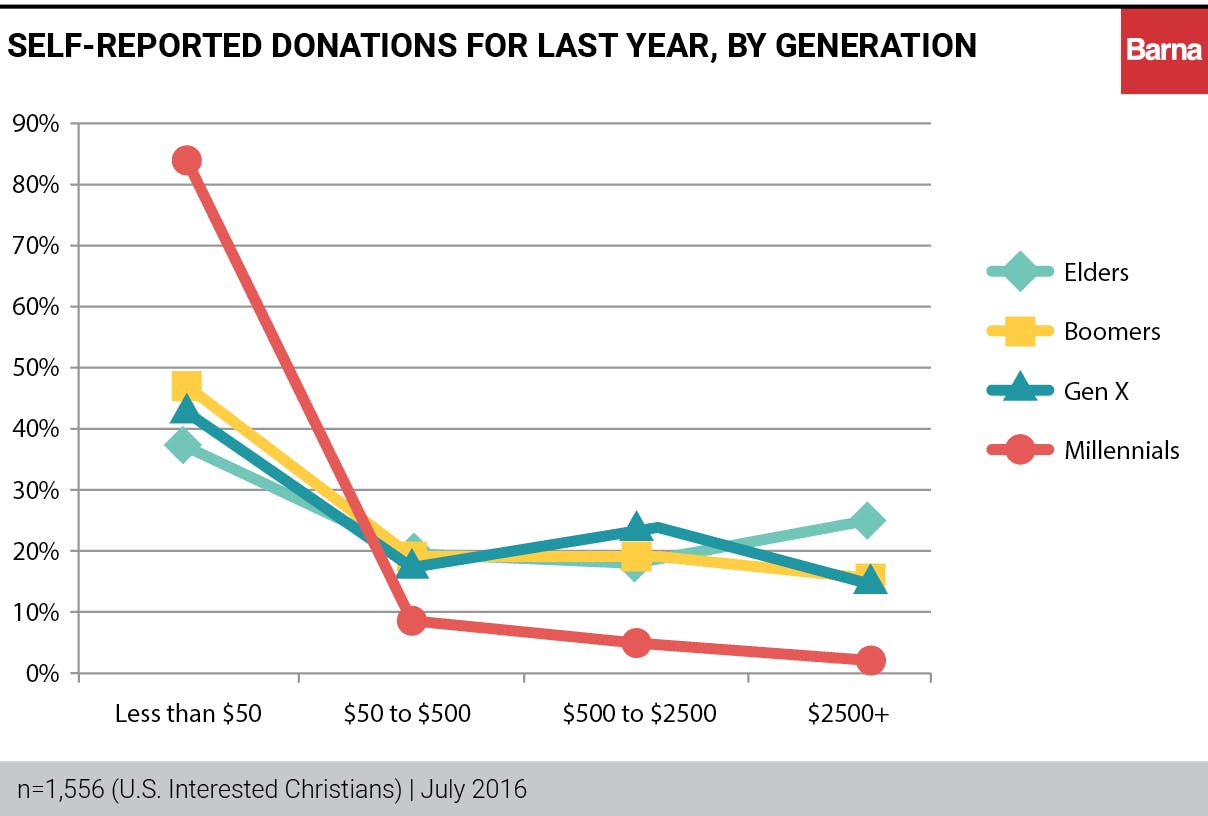 Ultimate Financial Goals
According to analysis of data Barna gathered between 2013 and 2016, practicing Christians report giving an average (median) of $1,400 a year to their church—somewhere between 3 and 4 percent of their disposable income (based on the average U.S. net income of $39,424). This isn’t much. The reason could be that out of 10 possible answers to the question, “What would you consider to be the ultimate financial goal in life?” the option “to serve God with my money” ranks at only number six among Christians. A total of just one in 10 Christians chose that answer. Serving God with one’s money is, for most people, not as urgent as other priorities—though Elders are twice as likely as others to say it is, which makes serving God the number-one financial goal among senior Christians. The percentage of Elders whose goal is “to have enough money to give charitably” is also higher than average (18% vs. 11% all Christians). “Providing for my family” tops the list among all Christians (22%), and Millennials are more likely than the norm to select this option (31%). Since many young adults are starting their family (or at least contemplating it), it makes sense that this obligation would be on their minds.

Serving God with one’s money is, for most people, not as urgent as other financial goals. Click To Tweet 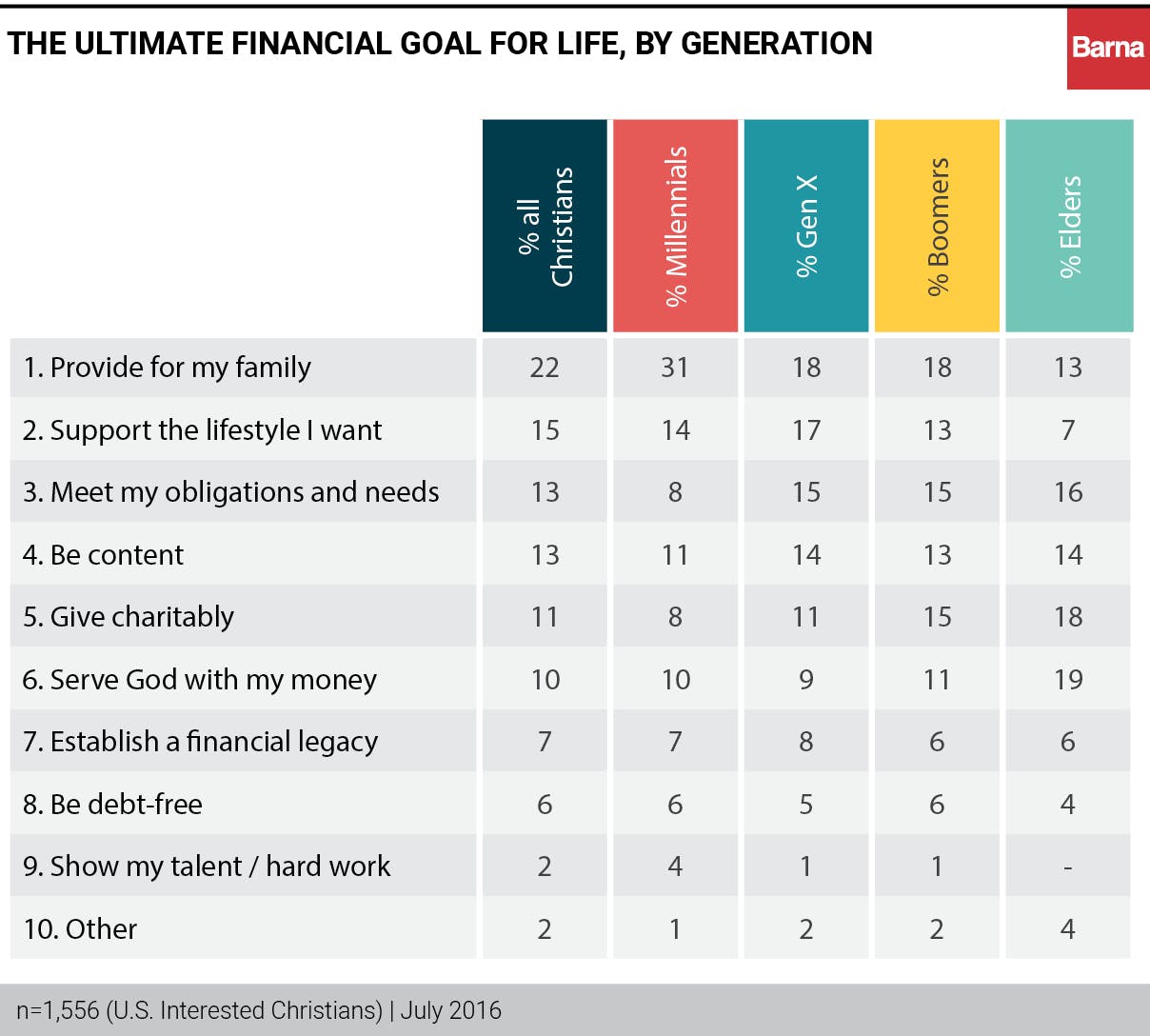 What Does It Mean to Be Generous? And How Is Generosity Changing?

Barna found that asking survey-takers to view themselves through the eyes of another person often yields a more honest response. So we asked, “If your friends knew everything about your finances and giving habits, how would they rate your generosity?” Millennials are slightly more prone than their older counterparts to say their friends would rate them as very generous, while Elders are least likely to say this. Twelve percent of Boomers, meanwhile, say their friends would rate them as not very generous, six times the percentage of Elders who say so. A plurality in each generation says they are somewhat generous.

How Generations Perceive Each Other
Barna asked Christians about the generations in their church congregation: Which is most generous with money, time and hospitality? The answers reveal a high degree of generational loyalty among older Christians but less consistent perceptions among younger adults. The older three generations (Gen X, Boomers and Elders) believe that, out of all the age groups in their church, Boomers give money most sacrificially—but among Gen X only about one-third says so, compared to majorities of both Boomers and Elders. The greater part of Millennials is nearly split on whether Boomers or Gen X are most sacrificial in their giving, but one in five says their own generation sacrifices most when it comes to financial giving. Fewer than one in 20 among the older generations agrees. 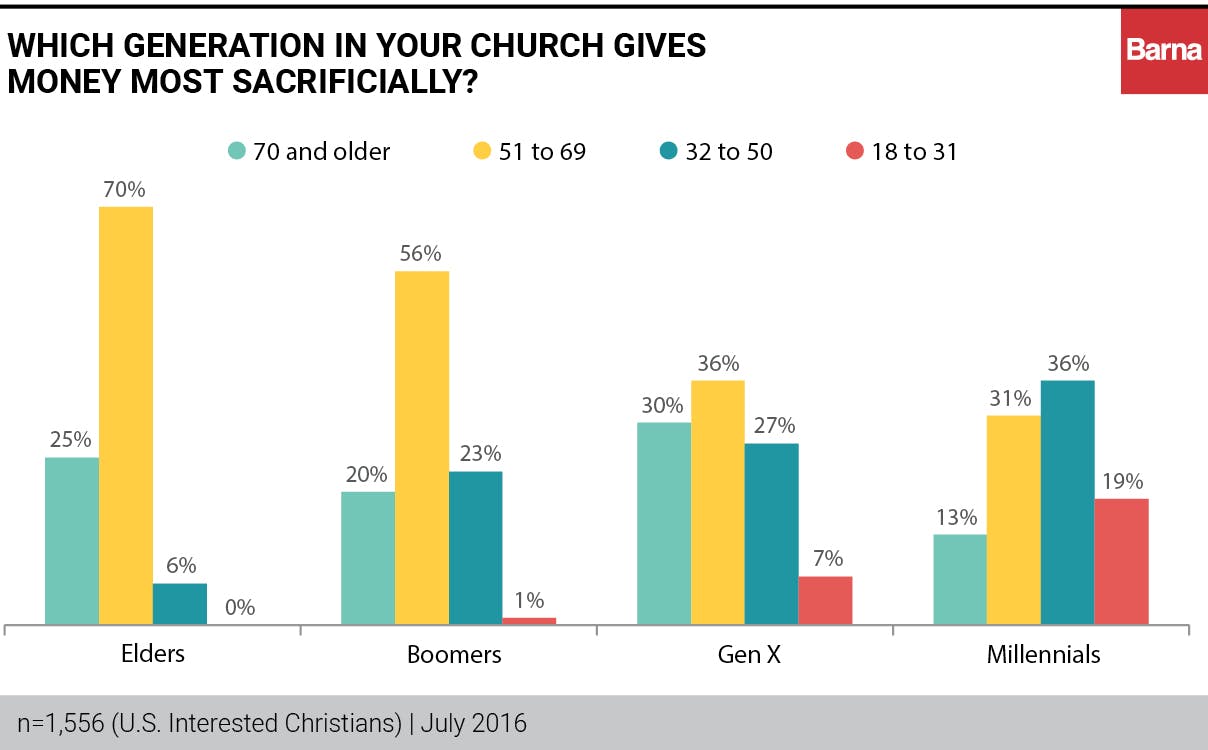 As with financial giving, most Christians perceive Boomers to be most sacrificial with their time, and the percentage that believes Millennials to be most generous in this regard shrinks in each successively older generation. Thirty-five percent of Millennials say their age cohort is most sacrificial when it comes to time, compared to one in seven Gen X, one in 10 Boomers and just 3 percent of Elders. When it comes to hospitality, more than three-quarters of Christians over 50 say older adults are strongest in this area; two- thirds of Gen X agree that Boomers and Elders in their church are most hospitable. Millennials, meanwhile, consistent with their definition of generosity, give themselves high marks here. 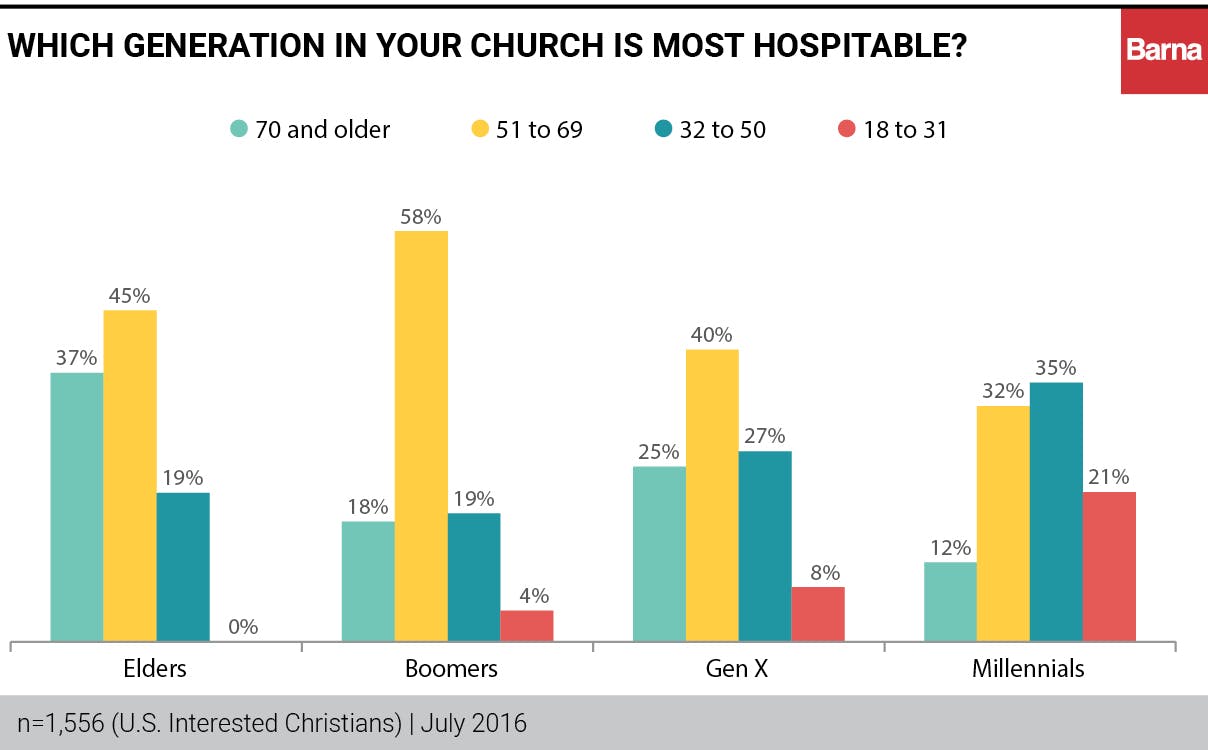 Photo by Vitaly on Unsplash

Americans Soften on Immigration in 2017

From “the wall” and “the travel ban” to DACA and ongoing coverage of the refugee crisis, immigration has been a front-and-center issue in the United States this year. New Barna data shows that the public sentiment has shifted, in some ways radically, toward a softer view on a number of key immigration issues since 2016.