Matthew 28:18-20 is the most well-known biblical record of what is commonly referred to extra-biblically as “the Great Commission.” But despite the significance of these and other verses that call Christians to “go and make disciples of all nations,” a surprising proportion of churchgoing Christians in the U.S. are generally unaware of these famous words from Jesus.

In partnership with Seed Company, Barna conducted a study of the U.S. Church’s ideas about missions, social justice, Bible translation and other aspects of spreading the gospel around the world, available now in the new report Translating the Great Commission. When asked if they had previously “heard of the Great Commission,” half of U.S. churchgoers (51%) say they do not know this term. It would be reassuring to assume that the other half who know the term are also actually familiar with the passage known by this name, but that proportion is low (17%). Meanwhile, “the Great Commission” does ring a bell for one in four (25%), though they can’t remember what it is. Six percent of churchgoers are simply not sure whether they have heard this term “the Great Commission” before.

When asked if they had “heard of the Great Commission,” half of U.S. churchgoers (51%) say they do not know this term. Click To Tweet 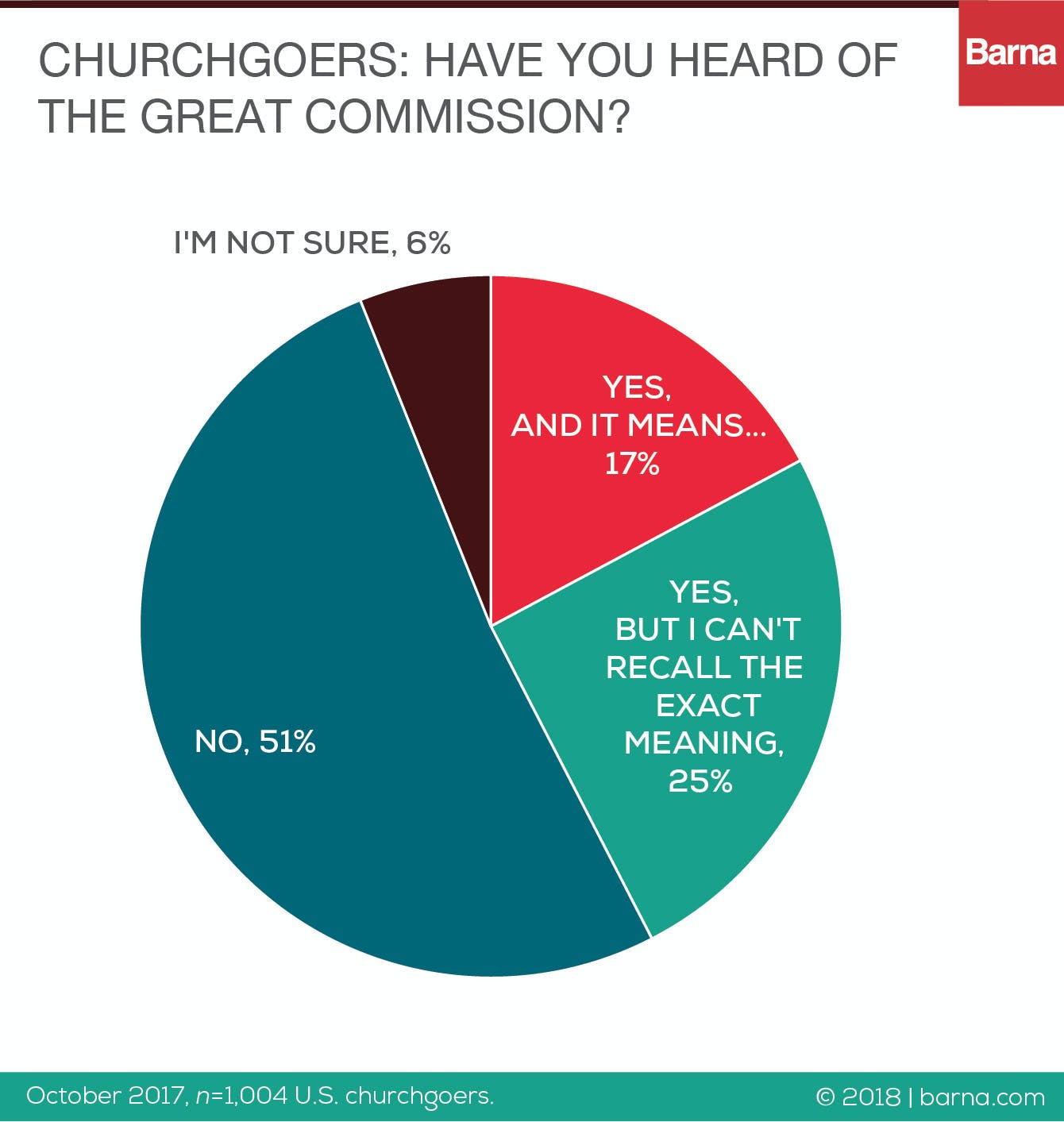 The data indicates that churches are using the phrase less, which may reveal a lack of prioritizing or focusing on the work of the Great Commission, but may also indicate that the phrase, rather than the scriptures or the labor, has simply fallen out of favor with some. 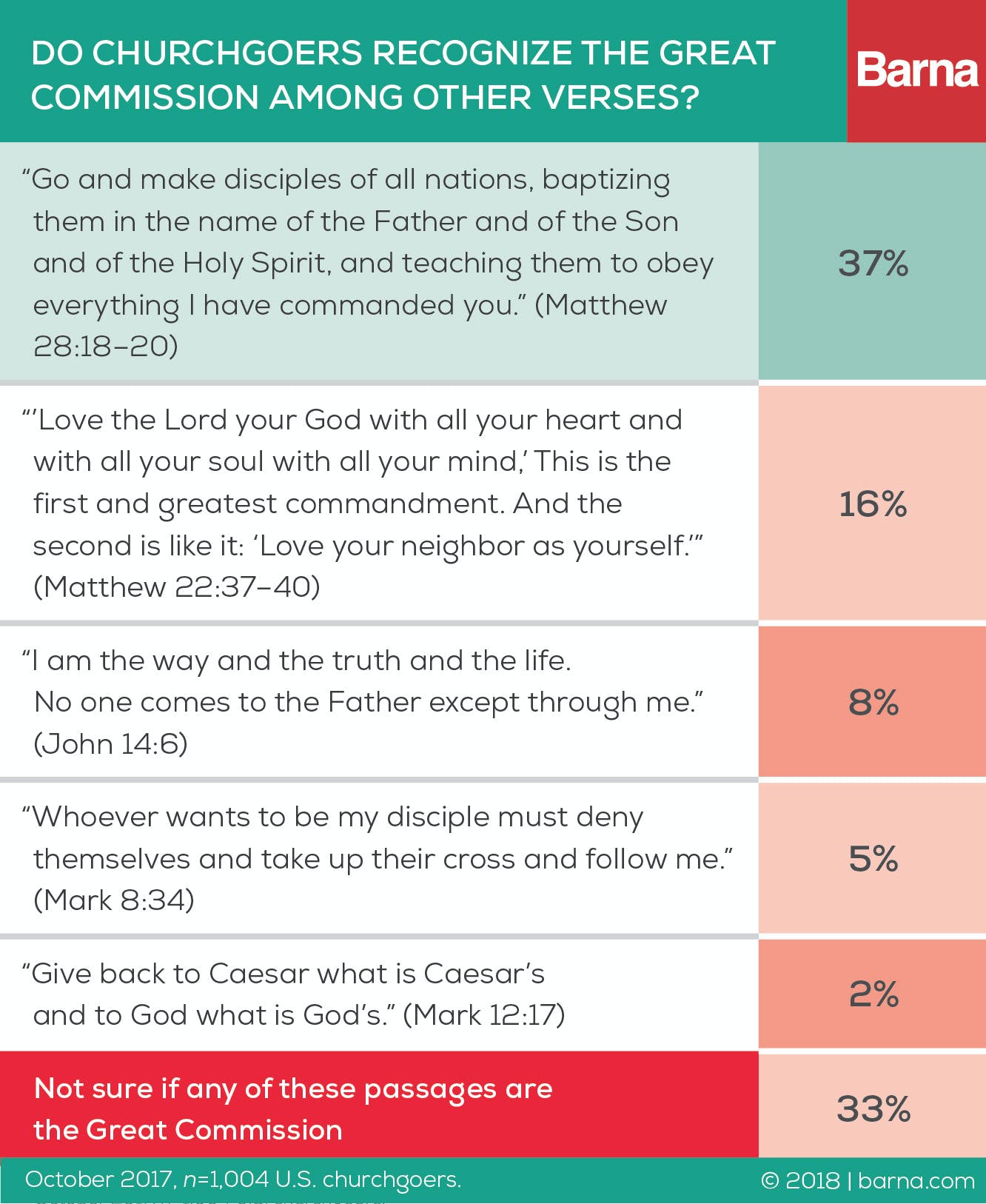 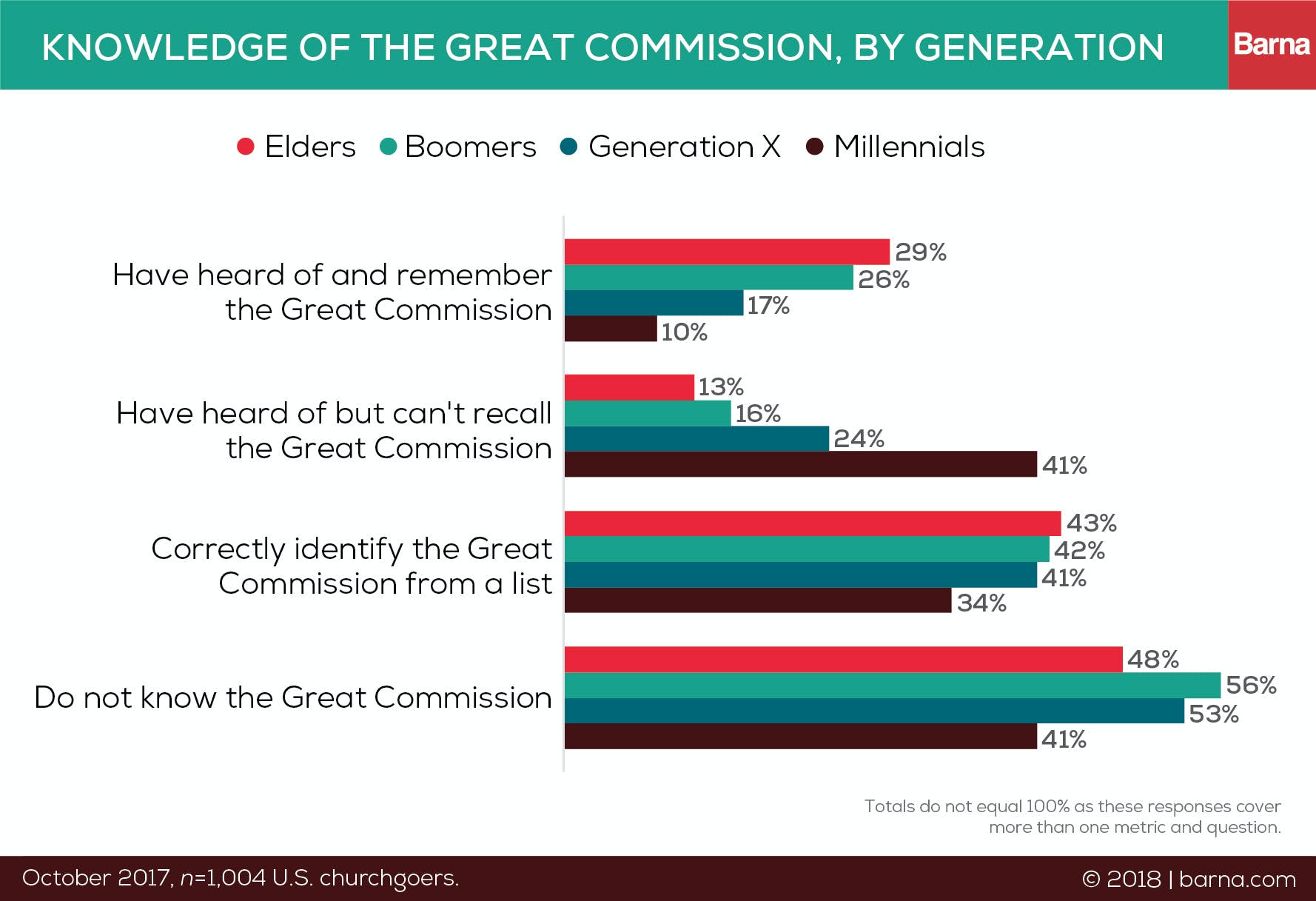 Evangelicals are the most likely churchgoing group to state that they have heard of the Great Commission and remember what it is (60%), which generally aligns with their theological disposition and the criteria to be characterized as “evangelical” in the first place. The traditional Christian views and personal spiritual commitment that shape evangelicals likely cultivate a higher level of awareness of the language of the Great Commission, and this missional jargon is more ubiquitous in the evangelical community. When selecting the Great Commission from the series of verses, three of four churchgoing evangelicals (74%) correctly identify it, the largest portion among churchgoing groups. Fittingly, American evangelicals also appear to be more Bible-minded, are more likely to be active in their churches and have deep knowledge of gospel context and the New Testament.

Evangelicals are the most likely churchgoing group to have heard of and remember the Great Commission. Click To Tweet

BIBLE-MINDED are those who have read the Bible within the past seven days and agree strongly that the Bible is accurate.

NON-MAINLINE are those in charismatic / Pentecostal churches, churches in the Southern Baptist Convention, churches in the Wesleyan-Holiness tradition and non-denominational churches, among others.
MAINLINE are those in American Baptist Churches USA, the Episcopal Church, Evangelical Lutheran Church of America, United Church of Christ, United Methodist Church and Presbyterian Church USA.

Denominational Distribution: The Most Catholic and Protestant Cities in the U.S.

Where do main denominations congregate? This infographic lists the top locations of Catholic, mainline and non-mainline churches.