Reported incidents of hate speech and hate crimes in the United States have risen dramatically in recent years, according to multiple sources. The FBI recorded over 7,000 hate crime incidents in 2017, while the Anti-Defamation League says anti-Semitism reached “near-historic levels” in 2018. These events, whether violent or verbal, in person or online, have also prompted debate about the responsibility of technology platforms, particularly their role in curbing online harassment amid the rise of various hate groups.

If hate speech and crime has increased, Barna sought to explore if public awareness of these events has followed suit. What are Americans’ personal opinions about or experiences with such interactions, attacks or crimes? Below, we’ll look at where, if at all, U.S. adults witness incidents of prejudicial or threatening behavior, and how those accounts differ by age, ethnicity and religion.

Most U.S. Adults Believe Hate Speech Has Risen
A large majority of American adults says the amount of hate crime and hate speech (meaning, speech or crimes that are motivated by racial, sexual or other prejudice) has changed in the past five years; seven in 10 (70%) say this behavior has increased. Just under one-quarter (22%) believes the occurrence of hate crime has stayed about the same compared to previous years. Only 3 percent say it has decreased.

Most attribute the change to the fact that politicians are encouraging or feeding this trend (65%). Similar majorities say social media and the internet have amplified it (62%) or that it is driven by America becoming increasingly more divided as a country (61%). More than half say the internet has provided a forum for hate groups to multiply (57%), that hate crime has increased because the news has drawn attention to it (54%) or even that it has become more socially acceptable to publicly treat others with prejudice (51%). Four in 10 believe increased diversity in America has caused fear or prejudice (37%). Only a few respondents say religious organizations amplify hatred (16%). 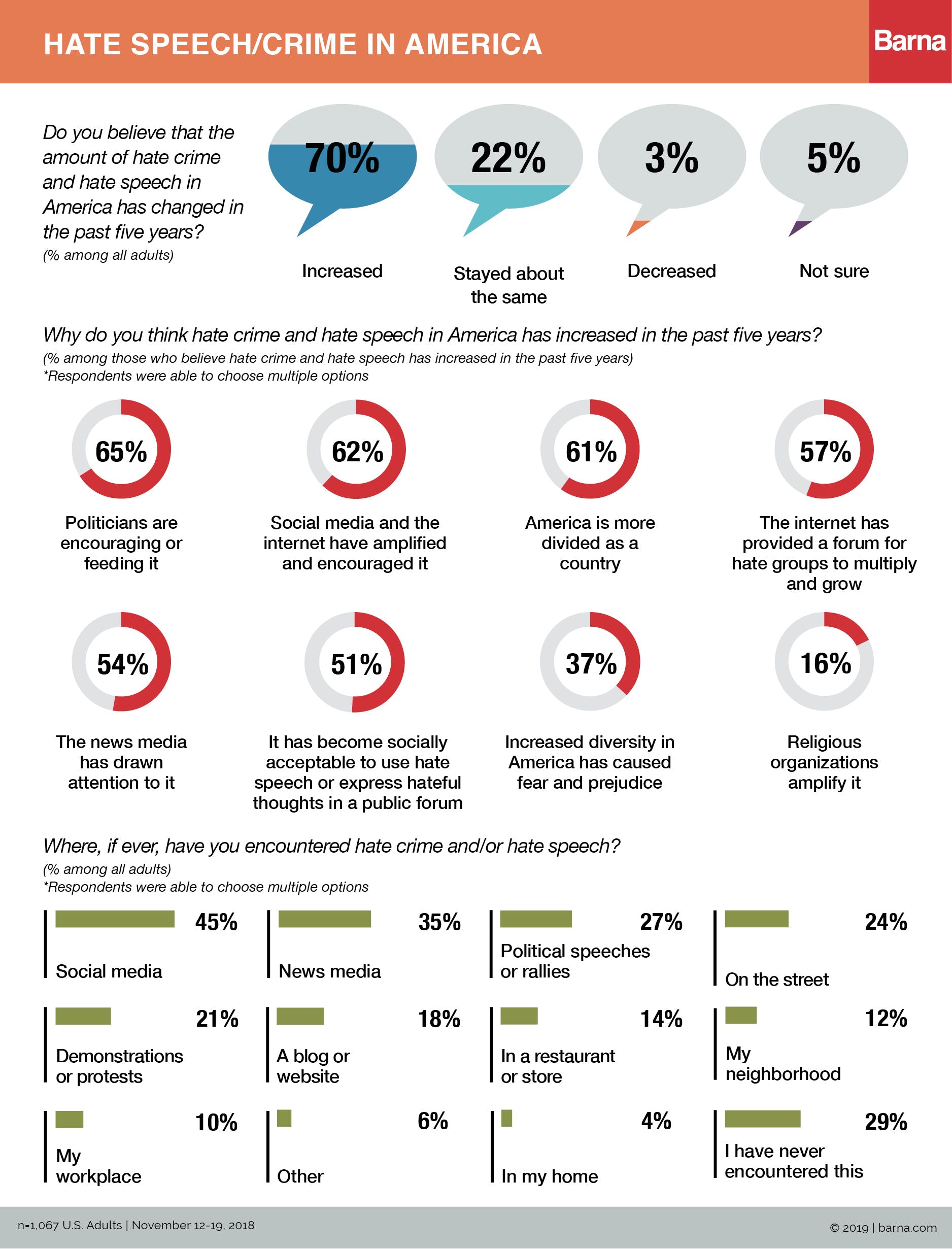 Some of these theories may be shaped by respondents’ own experiences with or proximity to hate crime or speech. Though three in 10 Americans (29%) say they have never personally encountered such acts, many adults say they have—mainly on social media (45%). One in four (24%) reports an encounter on the street. Many encounters may share a political context, such as in news media (35%), at political rallies (27%) or protests and demonstrations (21%).

Considering these prominent mentions of the role of present political discourse, there are interesting gaps between how liberals and conservatives respond. Liberals are more likely than conservatives to both believe hate speech has increased (84% vs. 61% conservatives) and to say they have observed it in any environment, including at political rallies (41% vs. 21%). Meanwhile, one-third of those who identify as mostly conservative (35%) says they’ve never encountered this behavior.

Older Generations’ Primary Examples of Hate Speech Come from News Media
There are some stark and complicated differences along generational lines. Boomers (77%) are most likely to say they have observed an increase in hate crimes and speech, followed by Gen X (70%) and Millennials (59%). However, their own experiences with it are more general than personal, with news media being the primary place they say they observe hateful expressions (40% of Boomers, 29% of Gen X, 30% of Millennials). The younger generations are more likely to report more personal encounters of hate speech, whether on social media (46% of Millennials, 51% of Gen X, 35% of Boomers) or on the street (33% of Millennials, 25% of Gen X, 16% of Boomers). (Elders and Gen Z are not shown here due to small sample sizes, though Gen Z responses trend similar to Millennials’ and Elders’ similar to Boomers’.) 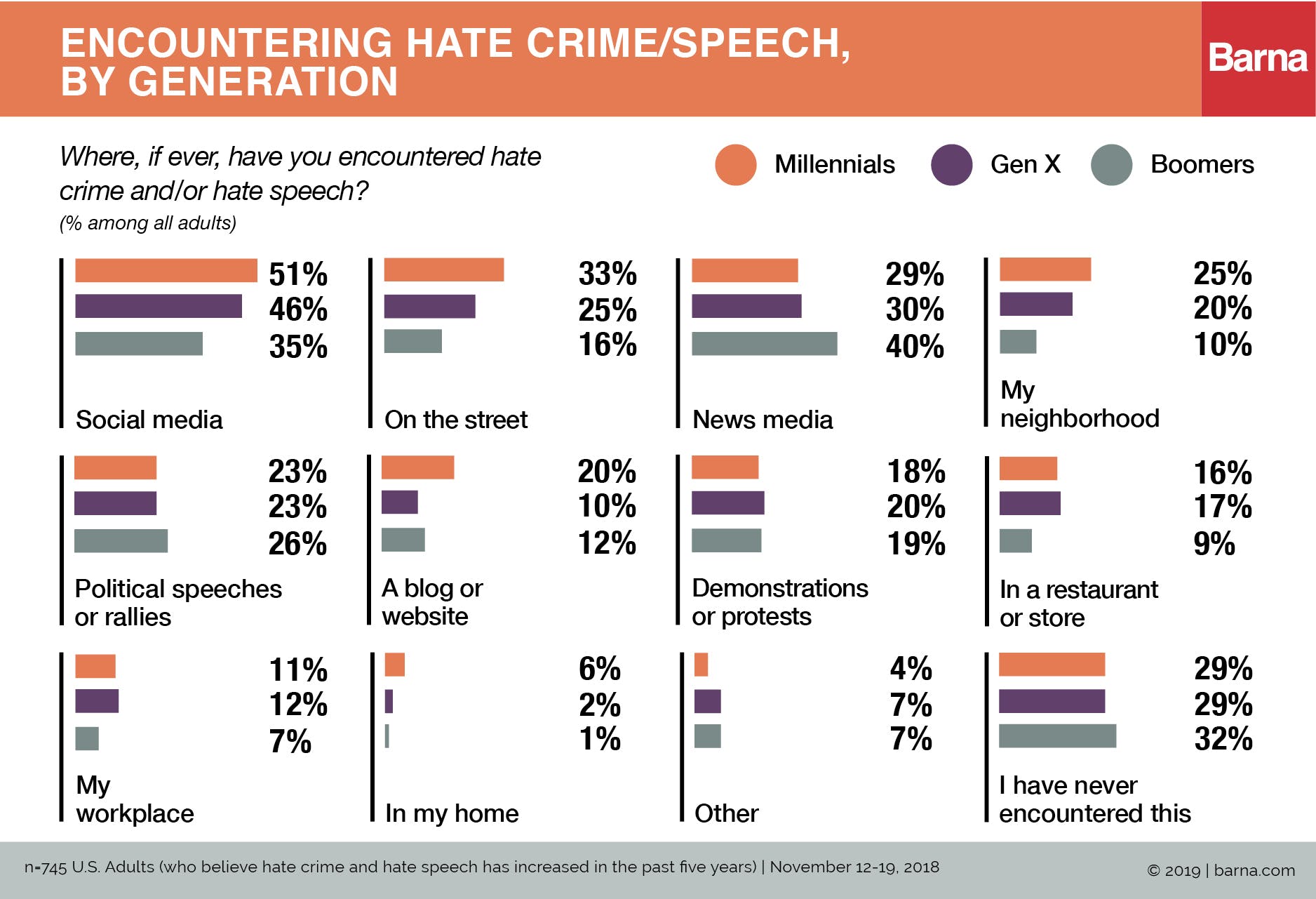 In addition—and perhaps connected to their perceptions of hate speech via news media—Boomers stand out in primarily blaming political discourse (71% vs. 59% of Gen X and 62% of Millennials). Gen X in particular disagree with the opinions of older generations that hate speech could be spurred by greater divisions in America (55% of Boomers) or by an environment that sees hateful expressions as publicly permissible (43% of Gen X vs. 57% of Boomers). Meanwhile, Millennials are the generation most likely to feel that growing diversity has inflamed prejudicial attitudes (45% vs. 34% of Gen X and Boomers), which could be linked to Millennials being a more diverse generation than their elders to begin with. 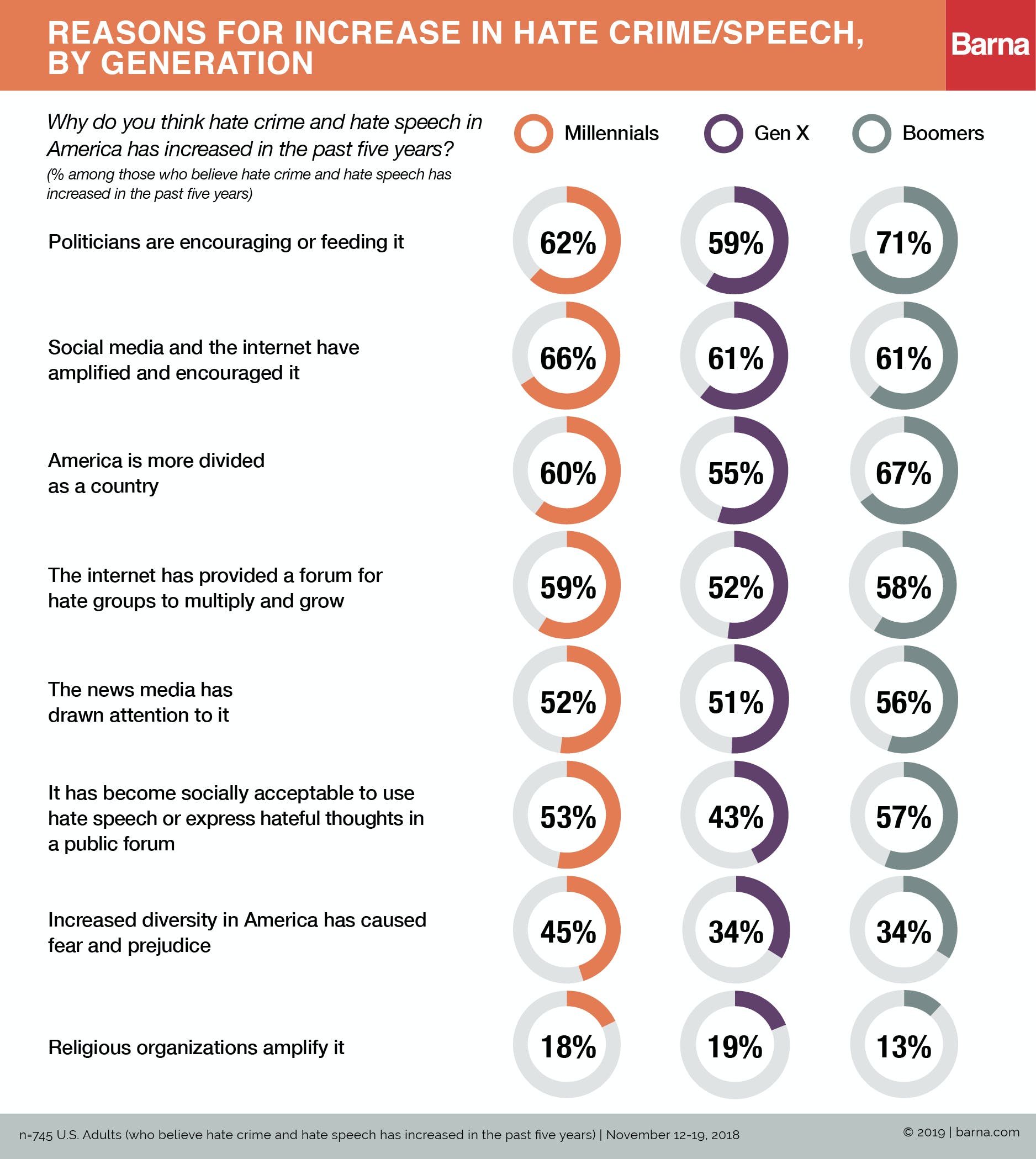 Ethnic Minorities More Likely to See Increased Hate Crime / Speech
Race-related hate crimes in particular have been under the microscope in recent years. Accordingly, one’s race or ethnicity is a predictor of responses in this study. A majority of all ethnic minorities (76%) has observed an increase in hate crime and hate speech, including eight in 10 black Americans (80%). The majority of white adults (67%) and (72%) Hispanics still observes an upward trend, but they are less likely than black Americans to report an increase. 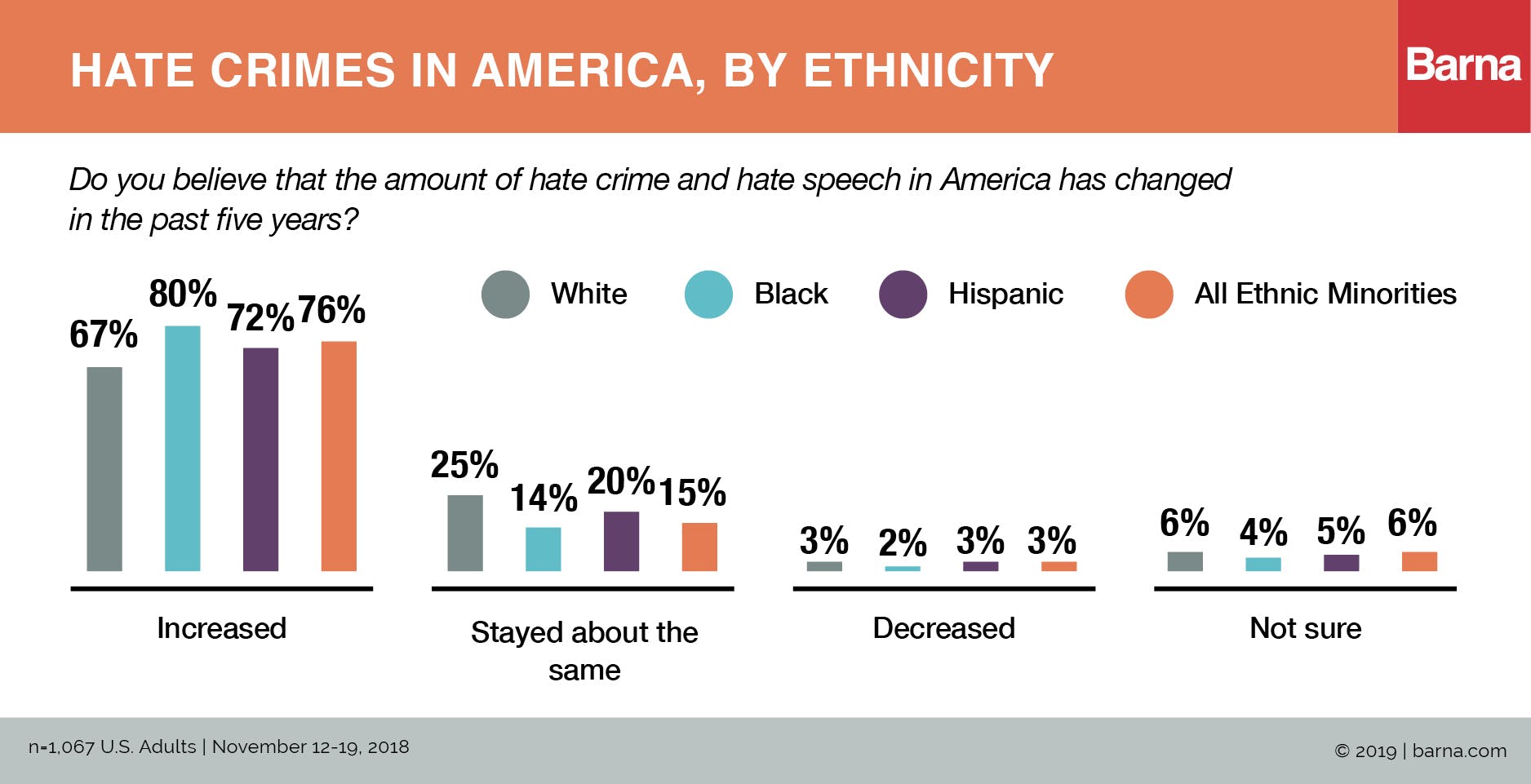 When asked to reflect on personal encounters with hate speech or hate crime, there are some telling differences in where these interactions reportedly took place. White individuals are significantly more likely than black adults to report seeing this behavior on social media (47% vs. 37%) and in news media (39% vs. 26%). By contrast, they are less likely to report encountering hate speech in some daily spaces, say, at work (9% vs. 15%) or in a restaurant or store (12% vs. 21%). For minorities, perceptions of an increase in hate speech may more often stem from firsthand experience. Similarly, in Barna’s new report, Where Do We Go from Here?, research shows that many white practicing Christians aren’t fully aware of the hardships that their peers of other races and ethnicities report experiencing. 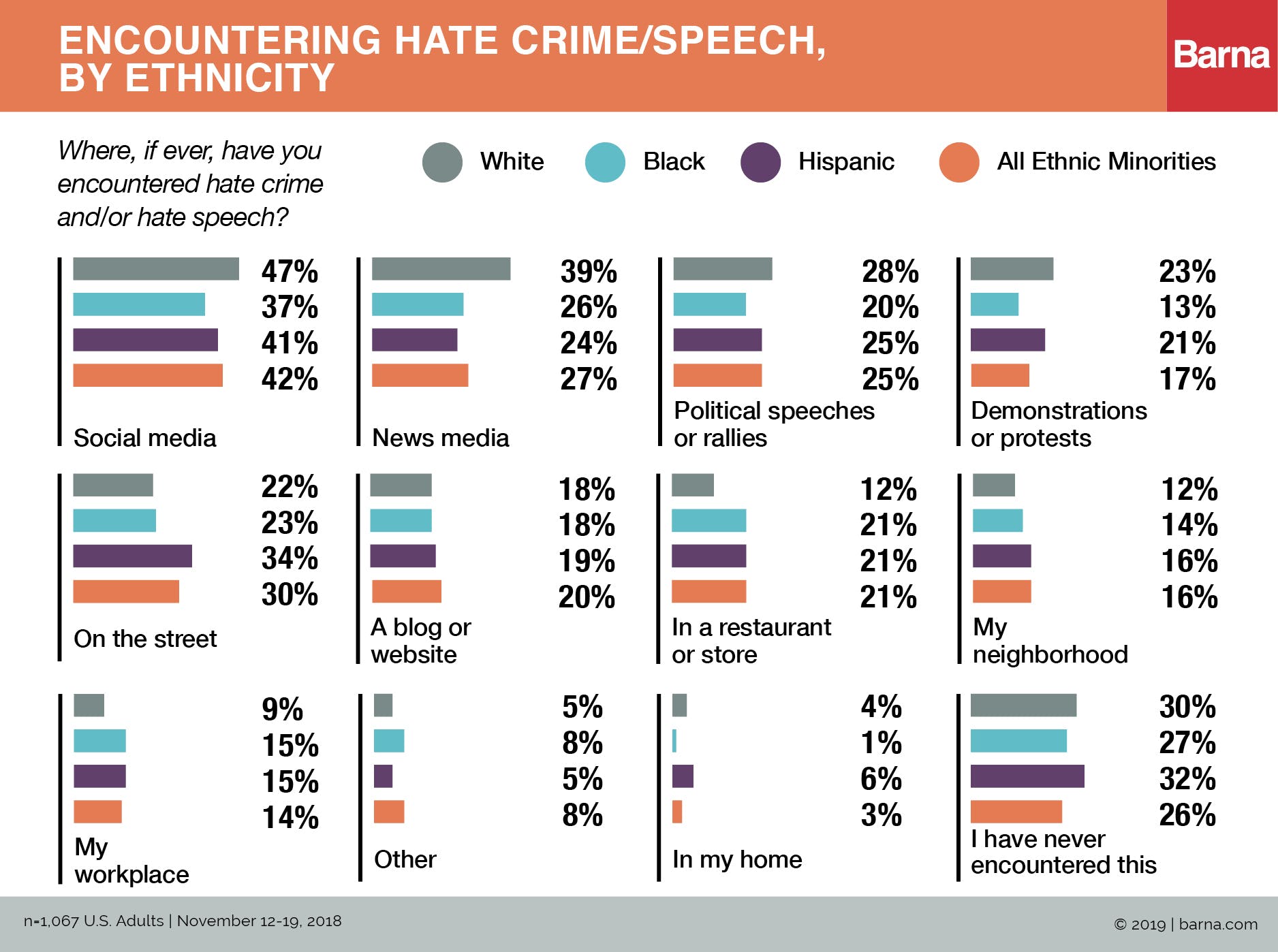 Faith & Perceptions of Hate Speech
As those called to “love their neighbor,” reminded that “death and life are in the power of the tongue” and encouraged that “you are all one in Christ Jesus,” where is the Church in this discussion?

Christians and non-Christians alike align with the total population of Americans, where 70 percent agree hate speech has risen in the past five years. When it comes to identifying catalysts for this increase, however, they diverge on some opinions. Non-Christians are significantly more likely to say politicians are encouraging or feeding it (73% vs. 61% Christians), the internet has provided a forum for hate groups (67% vs. 52%), increased diversity has caused fear or prejudice (41% vs. 35%)—and, notably, that religious organizations amplify it (29% vs. 10%), a view even more common among those of no faith at all (39%). Non-Christians are more likely to report encountering hate speech in certain locations, such as political rallies (31% vs. 25% Christians), restaurants or stores (18% vs. 12%) and their neighborhood (16% vs. 11%). These personal experiences with prejudicial behavior are particularly common among Americans who identify with religions other than Christianity (27% in their neighborhood, 26% on a blog or website, 21% in a restaurant or store). 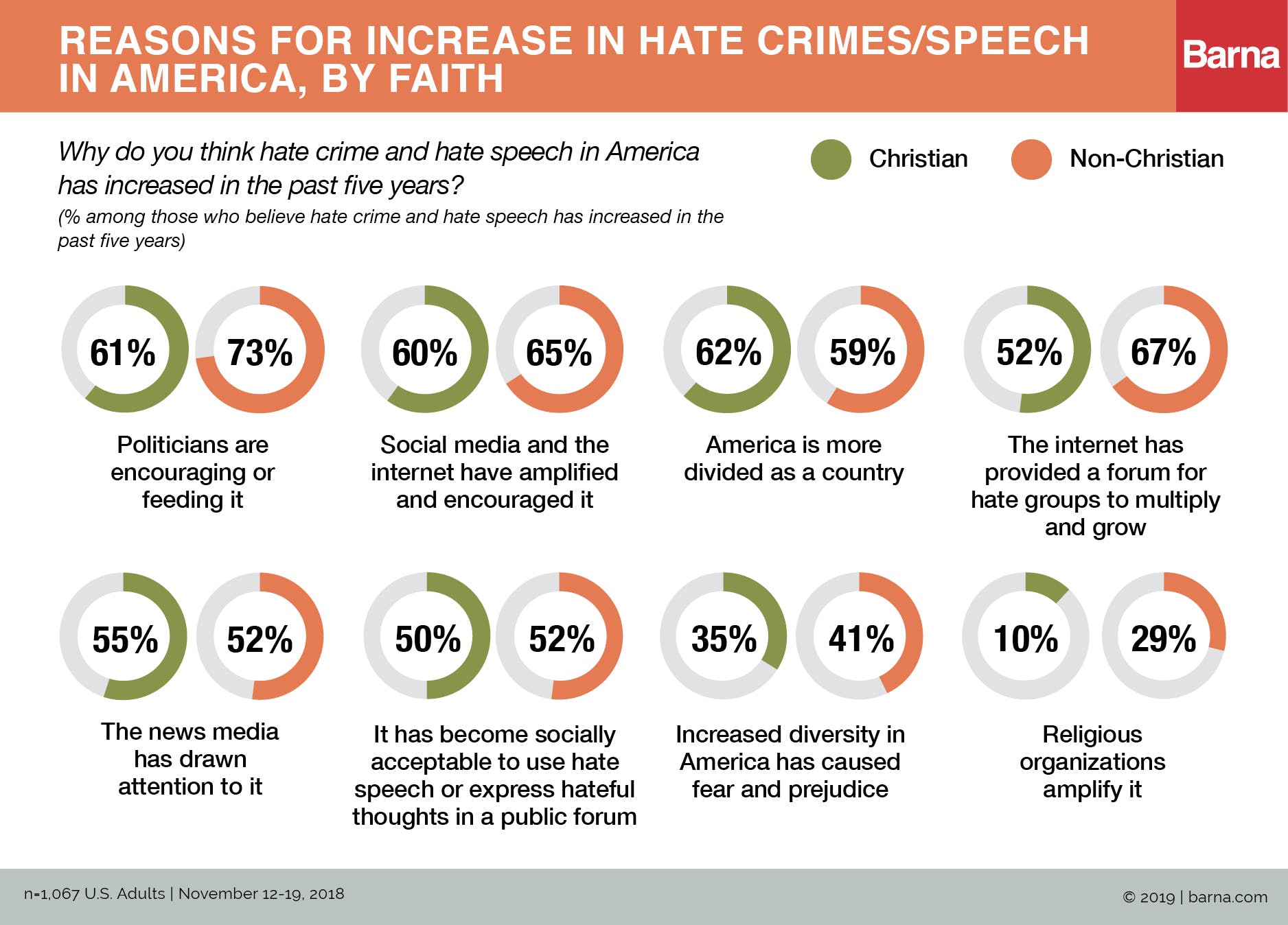 About the Research
This study is based on quantitative surveys of 1,067 U.S. adults. Interviews were completed online between November 12-19, 2018. The rate of error is 2.8 percent, at the 95 percent confidence level.

Photo by Prateek Katyal on Unsplash

Does an “inherited” religious identity contribute to the maturation and flourishing of the individual and their faith in the long run? The recent Barna report Households of Faith, produced in partnership with Lutheran Hour Ministries, finds some (at times surprising) links between faith heritage and present faith practice.