Though Christianity remains a powerful force today, its waning influence in American life means that younger generations are coming of age in a country more secular than ever. And with these shifts come challenges to talking about or sharing faith. In fact, Millennials—even those who are practicing Christians—tend to oppose evangelism altogether. But despite the growing indifference, other Barna data suggests an openness to different forms of faith-sharing among the less religious, and a spiritual curiosity among Millennials in particular.

Barna’s recent report Reviving Evangelism, produced in partnership with Alpha USA, shows that Millennials report many more faith conversations or even evangelistic encounters than older non-Christians. Though this could be partly due to the greater diversity that exists for young people among their family and friends, this isn’t the whole story. For at least some young adults, there appears to be deeper interest in spirituality in general, and in Christianity specifically.

As you can see in the infographic below, a few key trends emerge. Millennial non-Christians are much more likely to have had one or more conversations about faith than their older counterparts and are twice as likely to express personal interest in Christianity (26% vs. 16%). They’ve also had much more personal experience with all kinds of evangelistic methods than older non-Christians, including through tracts (45% vs. 26%) or encounters with a person either at church (35% vs. 19%) or on the street (30% vs. 16%). However, their favored method for exploring faith is a one-on-one conversation with a Christian (53%), something only one-third of older non-Christians prefer (32%).

Read a Q&A with Josh Chen, missions director for Cru, from the Reviving Evangelism report. 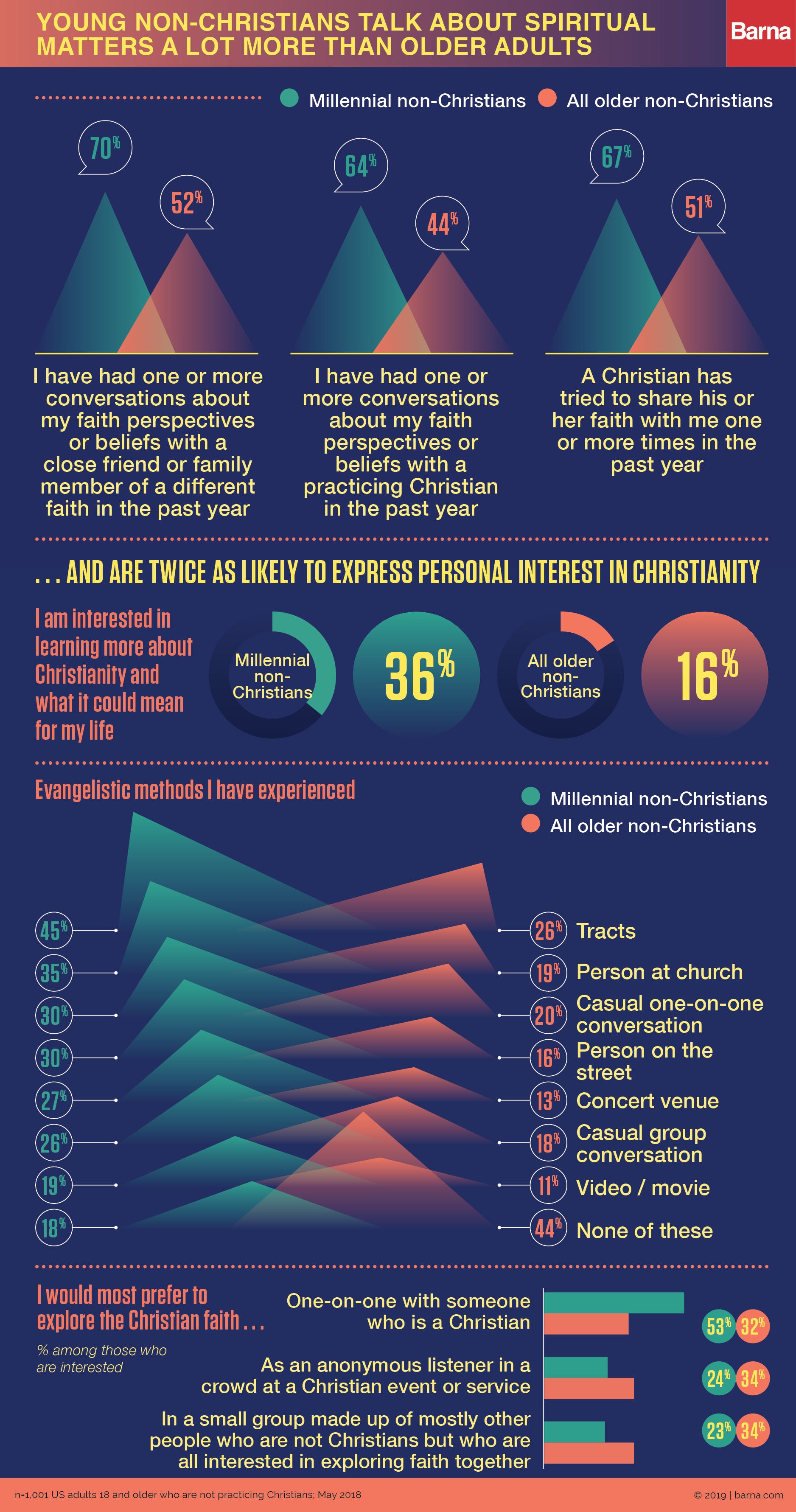 Non-Christians identify with a faith other than Christianity (“religious non-Christians”) or with no faith at all (“atheists / agnostics / nones”).

Photo by Matthew Henry on Unsplash

Millennials Bring Ambition and Optimism to Their Work

A new Barna study breaks down how employed Christians understand and value their vocation. The research suggests that the Christians in the largest generation in the modern labor force are buoyed in these formative working years both by a deep sense of ambition and by the hope of making a difference.