Today is #GivingTuesday, which aims to motivate end-of-year giving to charitable causes. While many Americans rush for Black Friday and Cyber Monday deals and gear up for Christmas shopping, this day of generosity is a chance to pause and consider donating money to organizations and charities. Over the years, Barna research has revealed much about the giving habits and motivations of U.S. adults, particularly churchgoers and Christians.

For Christians, Emotions Motivate Charity
The main reasons people say they have gotten involved in a cause in the past are primarily emotional: They believed they could make a difference (62%) or they saw or heard a moving story (45%). More than a third of adults remembers being driven by an overwhelming sense of purpose (38%) or a relationship with someone who was already involved in the cause (34%). Direct requests for involvement seem to be less convincing—few say that they joined a cause because they were explicitly challenged (20%) or asked (9%) to. However, such pleas may be more effective within the context of church attendance and faith commitment. Three in 10 (30%) practicing Christians (self-identified Christians who say their faith is very important in their lives and have attended a worship service within the past month) took up a cause because their church “cast a vision” for it. The motivations for selecting a specific organization to support are also often made on an emotional, heart-centered level. A special, personal interest is the most important factor (40% “very” + 46% “somewhat), followed by a desire to address an immediate need or emergency (32% “very” + 53% “somewhat”).

Hope of making a difference can also spur on concern or action. For example, when it comes to global poverty, a majority of U.S. adults (57%)—11 percentage points more than in 2011—says that knowing it is possible to end extreme global poverty would make them do significantly more to help bring that about. Among practicing Christians, the percentage climbs to 62 percent. 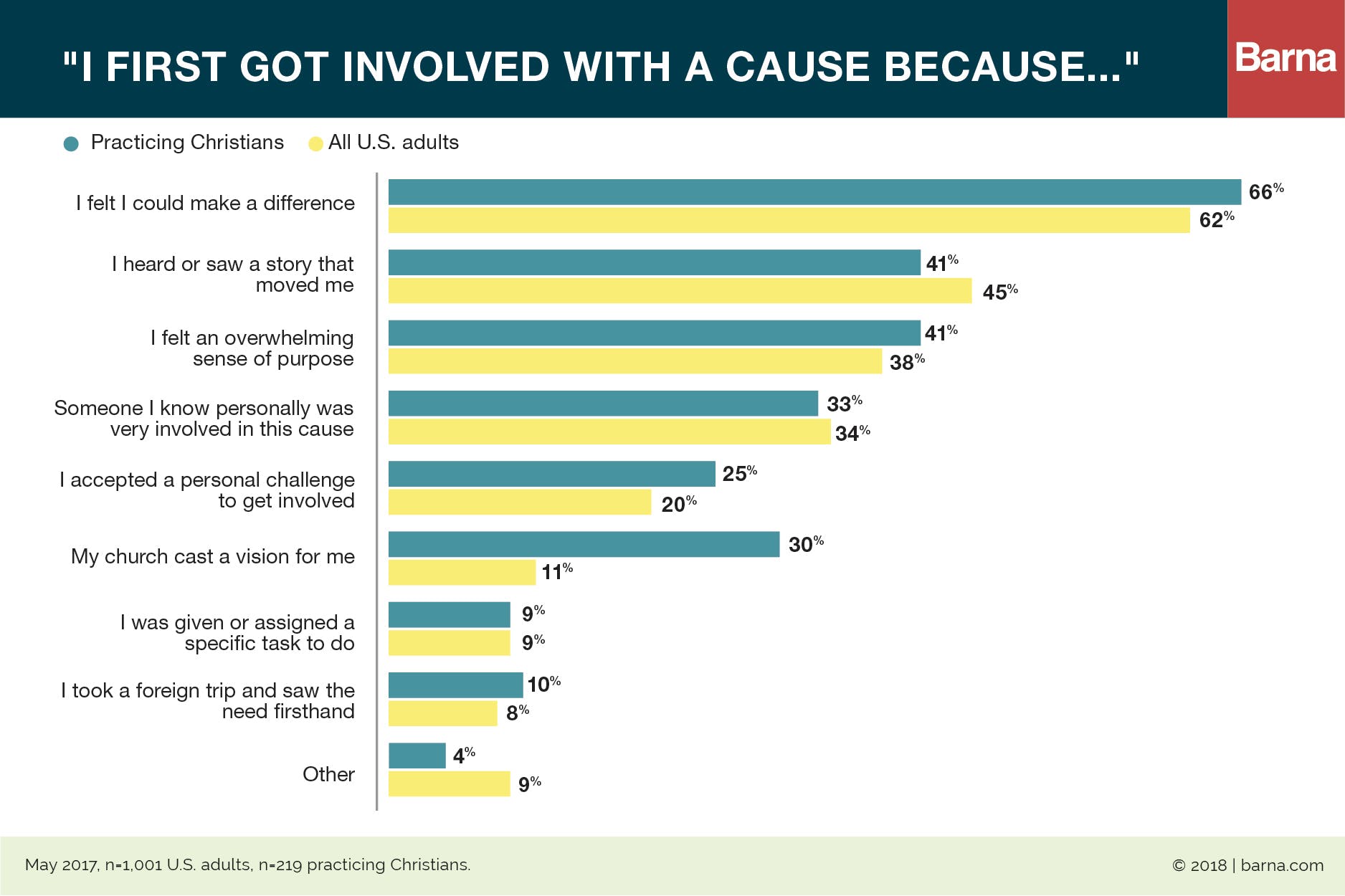 Christians Are Mostly Likely to Give to Church or Missions
A majority of practicing Christians (91%) says they’ve given money to church. Many church-going donors likely assume other needs or causes are being addressed or at least financially supported through their tithes and offerings, trusting their church to be a facilitator for further giving to and/or resourcing of other programs. Further, sizeable majorities of practicing Christians give to missions (75%), local organizations that take care of people in need (70%) and directly to individuals who require assistance (64%). In all categories, practicing Christians outgive their non-practicing peers, and they are 14 percentage points more likely to donate to organizations that address issues overseas. Evangelicals are also more likely than other faith groups to have donated to a church (93%), missions organizations (81%) and those in need (72%), showing consistency as a group in whether they give and what they give toward. 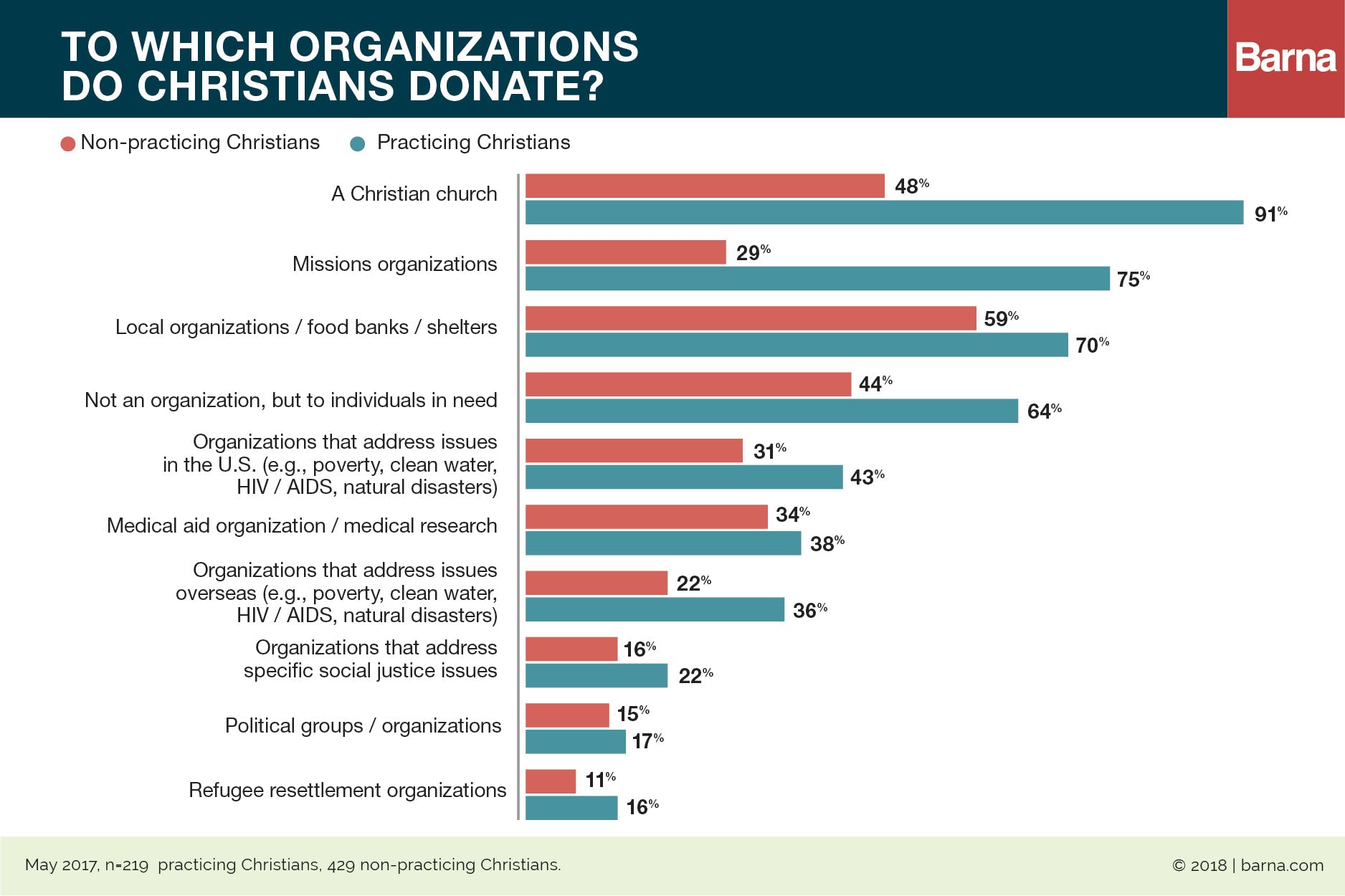 Most Christians Prioritize Providing for Their Family
Of 10 possible answers to the question, “What would you consider to be the ultimate financial goal in life?” the option to “give charitably” ranks at number five, with a little over one in 10 Christians choosing that answer (11%). This is followed by the option “to serve God with my money,” ranking just below at number six (10%). Elders are twice as likely as others to priortize serving God with their money, which makes this the number-one financial goal among senior Christians. The percentage of Elders whose goal is “to have enough money to give charitably” is also higher than average (18% vs. 11% all Christians). “Providing for my family” tops the list among all Christians (22%), and Millennials are more likely than the norm to select this option (31%). Since many young adults are starting their family (or at least contemplating it), it makes sense that this responsibility would be on their minds. It’s less clear whether this is a true generational difference or if Millennials’ goals will change with their stage of life.

Generosity Is Correlated with Age
When Barna asked respondents to report how much money they donated to their church or other nonprofits in the past year, researchers found that age plays a key role in self-reported donations. Younger adults, who tend to earn less money, report giving less: 84 percent of Millennials report donating less than $50 during the past year. This is more than twice the percentage of Elders (37%) and about twice as many Boomers who say so. Middle-aged and older adults tend to earn more, being more established in their careers or having more savings and assets. But when it comes to larger donations from $500 to $2,500, the gap closes somewhat. Elders report giving more than any other generational group, but less than 10 percent of Millennials report giving more than $50 last year.

Millennials Perceive Themselves as Generous, Yet Give Less
Many Millennials prioritize practical concerns over philanthropic goals when it comes to their financial plans, yet generosity remains a significant facet of their self-perception. Of the four adult generations of Christians, Millennials are most likely to say that generosity is important to them personally. Boomers are less apt to say so, and twice as likely as the youngest adults to say generosity is only somewhat or not very important to them (39% vs. 20% Millennials). But even though Millennials are most likely of the generations to report donating less than $50 last year, three in 10 would rate themselves as very generous with their monetary giving. Analysis suggests Millennials think they are generous relative to their income level and life stage, but older generations often have greater resources and therefore tend to give more.

Non-practicing Christians are self-identified Christians who do not qualify as practicing.

Getting together over the holidays can be almost notoriously fraught. Over the years, Barna’s research has covered some of the delicate or even difficult dynamics that might exist across generations or simply across the dinner table.