Beyond an Invitation to Church: Opportunities for Faith-Sharing

Every Easter season, many churches may view their holiday services as an opportunity for outreach or evangelism. Pastors are quick, for example, to encourage their congregants to invite their friends to church—something plenty of churchgoers appear willing to do. Barna’s recent report Reviving Evangelism, produced in partnership with Alpha USA, shows that half of practicing Christians (52%) are indeed completely comfortable extending such an invitation.

However, inviting friends to church is only one of many possible forms of faith-sharing. The data point to other ways in which people who are not practicing Christians would like to explore their faith, and the common approaches taken by Christians. This new research adds to Barna’s other data showing Millennials’ opposition toward evangelism, and the stark gap between who non-Christians want to talk to about faith and the Christians they actually know.

Lapsed and Non-Christians Favor Casual Faith Encounters
In order to assess the perception and experience of those being evangelized, Barna looked closely at two key groups for this study: “Lapsed Christians” (those who identify as Christian but have not attended church within the past month) and “non-Christians” (those who identify with a faith other than Christianity or with no faith at all). Both groups were asked about the level of comfort they feel in a number of faith-sharing approaches taken by Christians. A plurality in each group prefers either a casual, one-on-one conversation or casual group conversation. But their level of spiritual inclination directly relates to how they feel about these contexts.

Overall, settings that prioritize relational interactions tend to be more attractive than approaches that don’t, even among those who are inclined toward spirituality. Being approached by a street evangelist or with a tract, for example, are unpopular methods even with people who are already open to exploring faith—and among those who are not, such approaches may do more harm than good. Two-thirds of non-Christians who say spirituality plays “no role” in their lives select “none of the above” (64%). 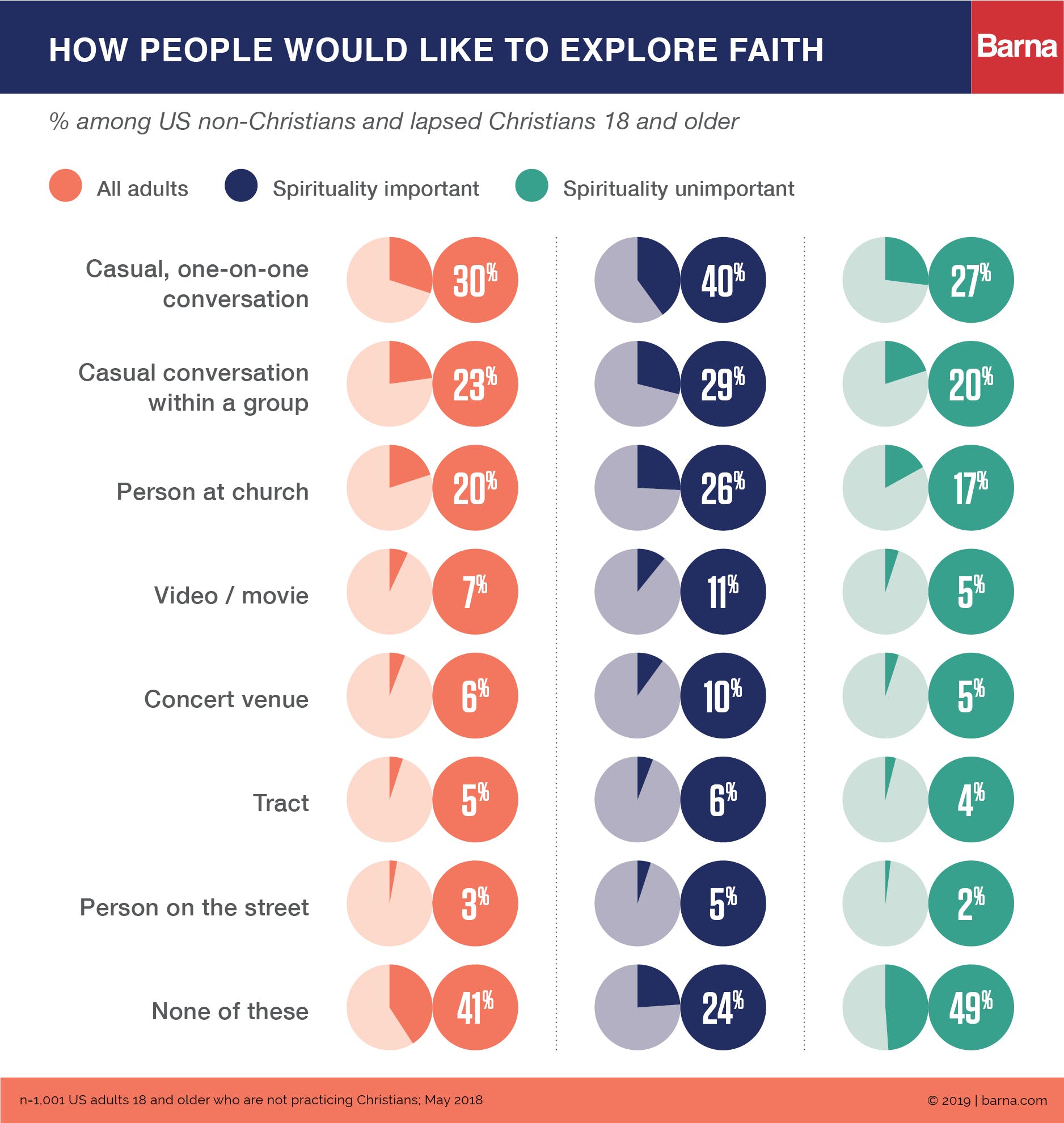 Desires for Faith Conversations Don’t Always Align with Experiences
In addition to how they would like to explore questions of faith, researchers also asked non-Christians and lapsed Christians about how they have experienced evangelism. Only about half say they have had at least one conversation with a Christian about faith or their beliefs during the past year (52%), but the vast majority have had at least one at some point in the past.

However, in almost every instance, the experience of an evangelism encounter for a non-Christian or lapsed Christian does not correlate to their desire for that particular kind of experience. For example, three in 10 (30%) desire a casual, one-on-one conversation, but only slightly more than two in 10 (22%) have experienced it. Further, more than double those who would be open to being reached through a video / movie had such an encounter (7% vs 14%); same goes for evangelism in a concert venue (6% vs. 17%). The most striking gap is between the very low percentage of those who would desire to explore faith after either receiving a tract (5%) or being approached by a person on the street (3%) and the very high percentage who have actually experienced this: three in 10 (30%), and 17 percent, respectively. 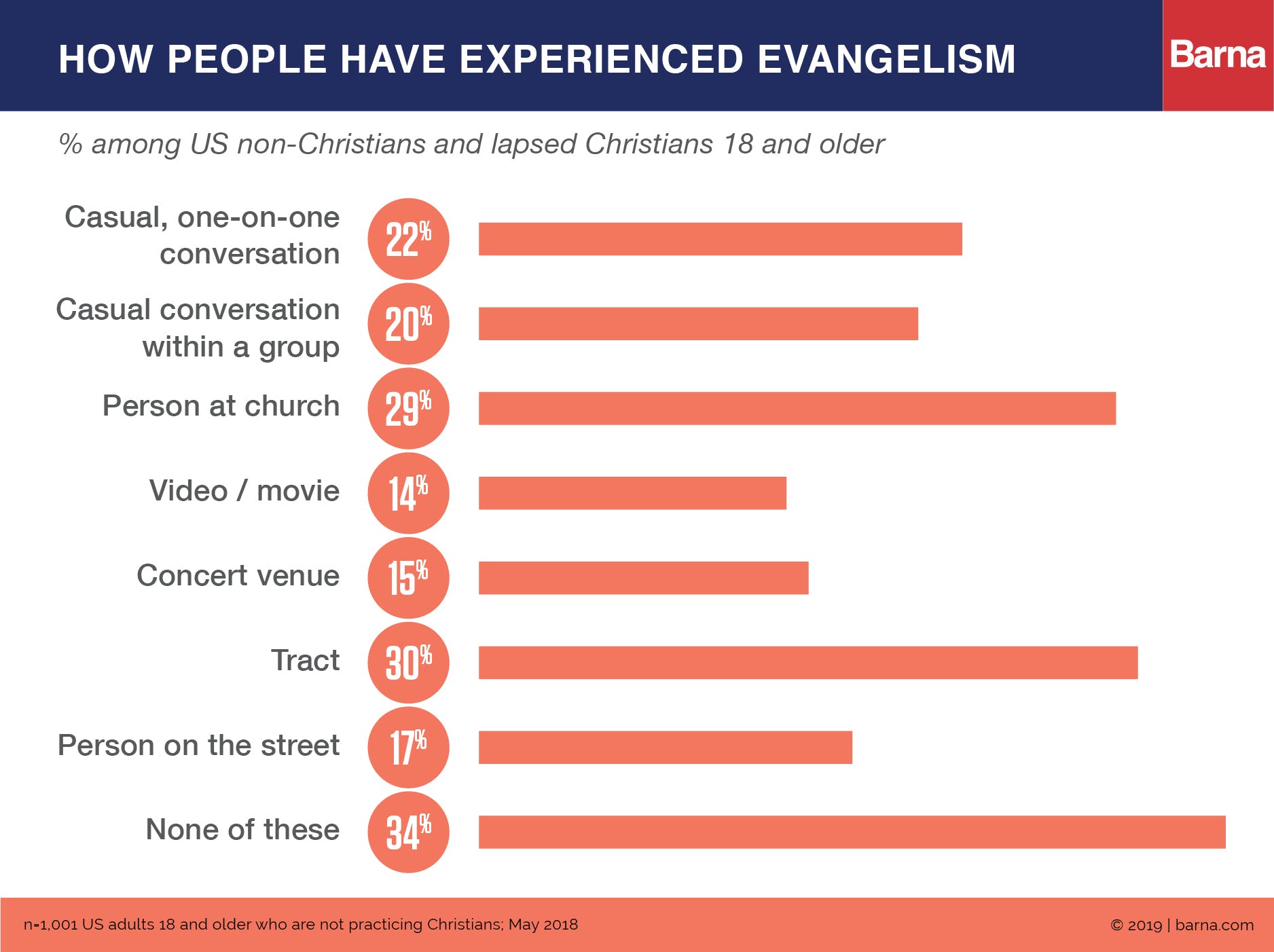 When it comes to interactions about faith, many practicing Christians (those who identify as Christian, agree strongly that faith is very important in their lives and have attended church within the past month) share the preferences of non-Christians—meaning, approaches that spark sincere, friendly engagement. Most favor small settings to share their faith—one on one or in small groups. There are, of course, a handful of Christians who evangelize from a stadium stage, but that doesn’t reflect most people’s reality: fulfilling the mission of Christ in small, relational ways. The desire, and level of comfort with sharing their faith in engaging and hospitable ways, is evident among practicing Christians. For example, almost six in 10 (57%) say they are completely comfortable with “listening to someone’s questions about faith,” and are equally comfortable with “extending hospitality to people of other faiths” (55%) and “making friends with someone who practices another faith or no faith” (55%). They also want to “share the story of their own faith journey” (53%) and “help someone of another faith or no faith with non-spiritual needs” (53%). 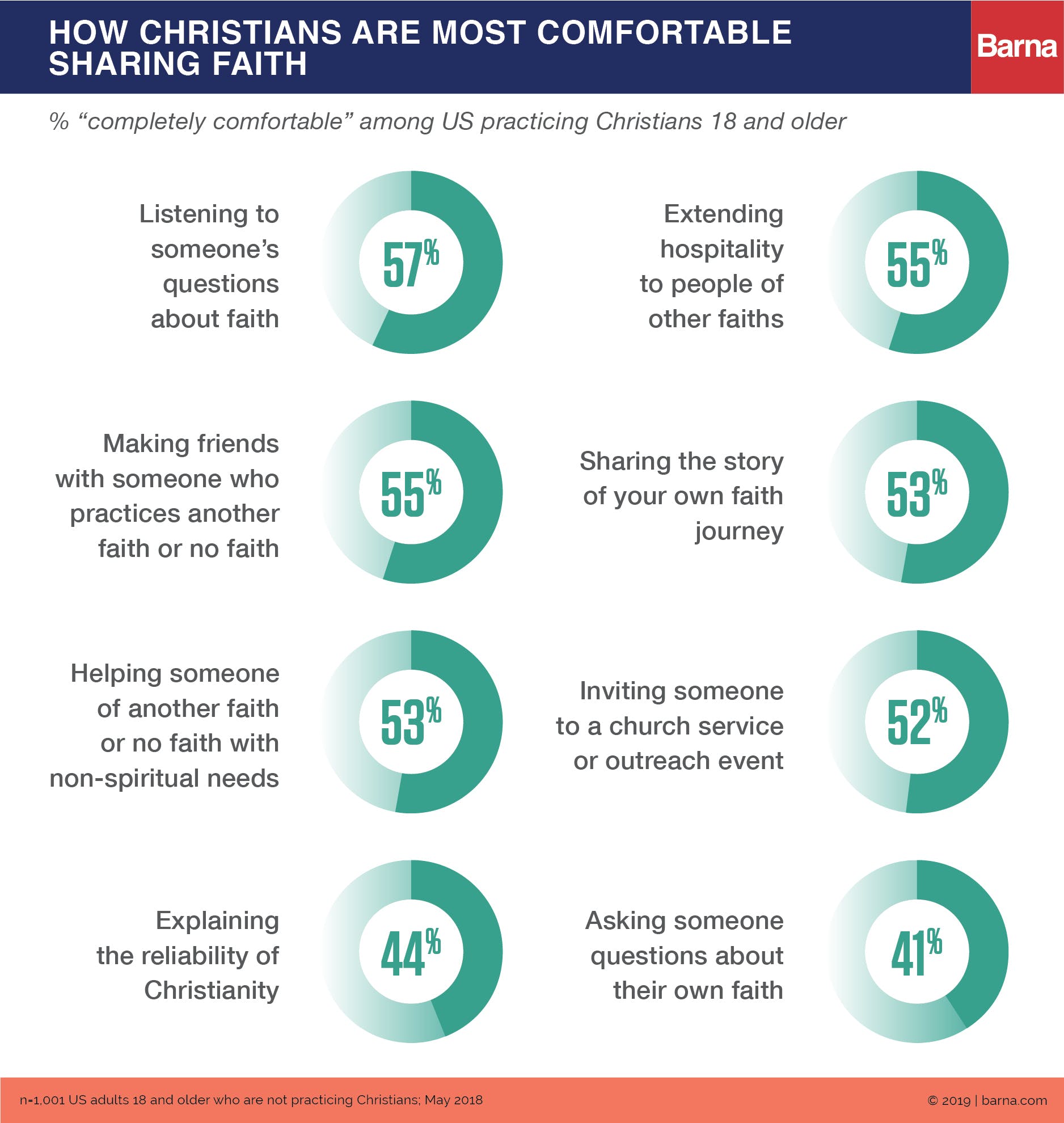 Lapsed Christians identify as Christian but have not attended church within the past month. Only 4 percent consider their faith very important.

Non-Christians identify with a faith other than Christianity (“religious non-Christians”) or with no faith at all (“atheists / agnostics / nones”).

Photo by mentatdgt from Pexels

Barna recently interviewed church leaders about the factors influencing spiritual formation and development. We found that although they agree that spiritual formation begins in the home and continues in the church, the perceived influence of schools is often either disproportionate or unaccounted for.