Do Christians Consider Their Pastors to Be Friends?

In light of October being Pastor Appreciation Month and October 13th being Clergy Appreciation Day, Barna wanted to shed more light on pastoral perceptions on a personal level, outside of regular church services and events. In this article, we will learn more about those who view their pastor in a role other than church leader—and more specifically, as a friend.

Frequency of Interaction with Pastors Outside of Church Service & Events
When asked if they regularly met with or spoke to the lead pastor of their church outside of weekly church service and events, one in five Christian adults (20%) answers yes. What about respondents who not only identify as Christian but also exhibit some level of commitment to their local church? One-third of churched adults (32%)—those who have been to church at least once in the last six months—say they regularly interact with their lead pastor outside of formal church settings. Forty-three percent of practicing Christians—self-identified Christians who say their faith is very important in their lives and have attended a worship service within the past month—answer similarly.

It’s possible these numbers are simply affected by the frequency with which the respondents attend church, adding to the likelihood of them having a direct relationship with their pastor. Another scenario to consider is that some pastors more often position themselves within the community by attending events outside of church at which congregants are also present. 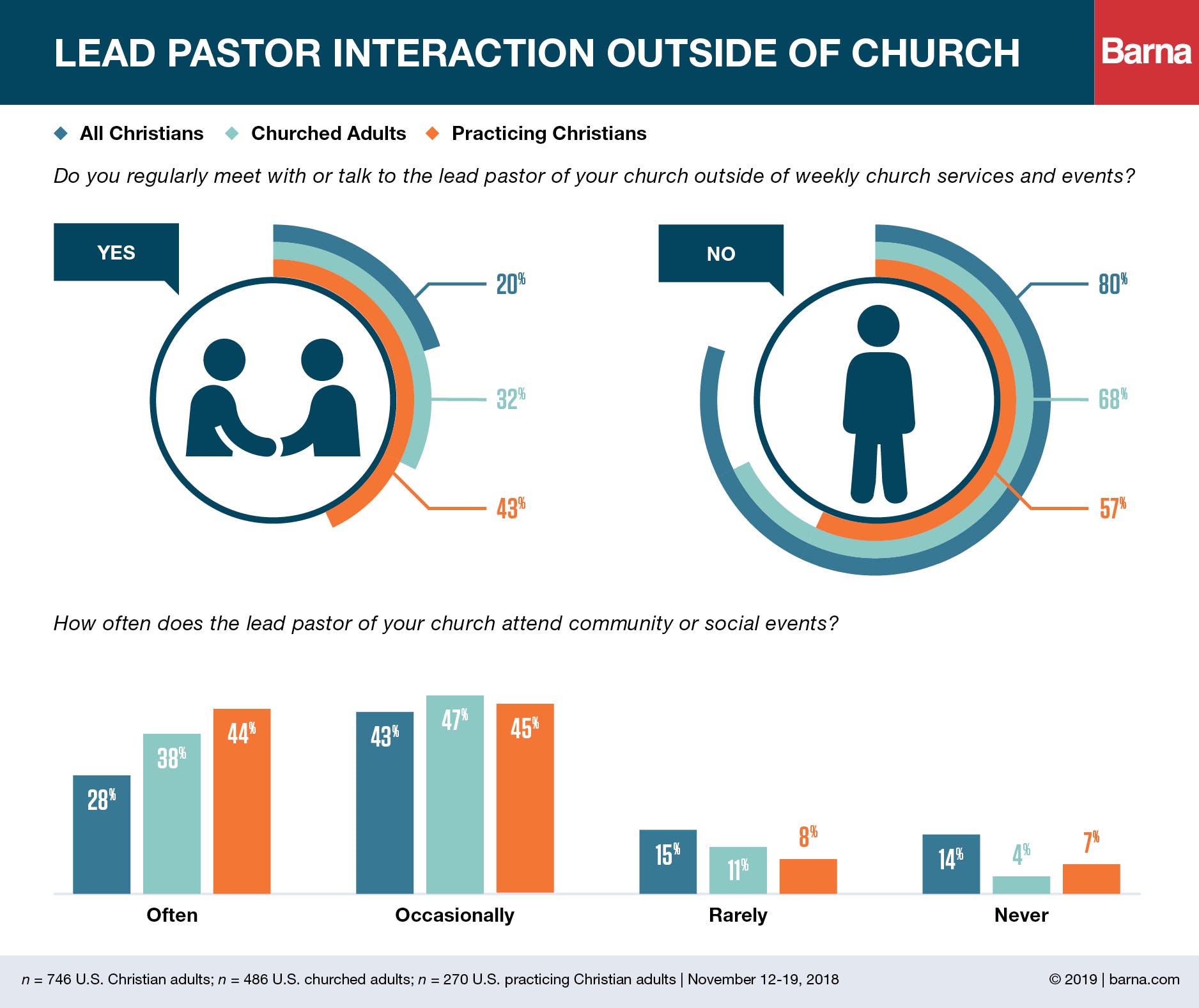 Among practicing Christians, Protestant congregants (48%) are more likely than Catholic congregants (27%) to interact with their pastor outside of church. This notable gap may in part be due to the ways in which Catholic churches have historically taken a more formal approach to clergy-community interaction.

While different denominations may be more or less likely to spend time with their pastor or priest outside the church community, other factors like age and gender do not play a significant role in dictating the likelihood of non-church interactions.

The level of congregational interaction with any other pastor or church leader, aside from their lead pastor, looks similar. About 18 percent of total Christian respondents say yes, they see these individuals outside of regular services, with 28 percent of churched adults and 35 percent of practicing Christians answering affirmatively.

Half of Christians Who Socialize with Their Pastor Call Them a Friend
Though most congregants surveyed admitted to not interacting with the lead pastor or other church staff outside of church, there is a small, yet significant number of constituents who do—and even regard their pastor as a friend.

Exactly half of Christian respondents and churched adults (50% each) call their pastor “friend,” as do 46 percent of practicing Christians. The lack of difference in percentages across these groups suggests that, while church attendance or faith practice increases the likelihood of getting to meet and know one’s pastor in the first place, friendship might naturally occur once those interactions come about. 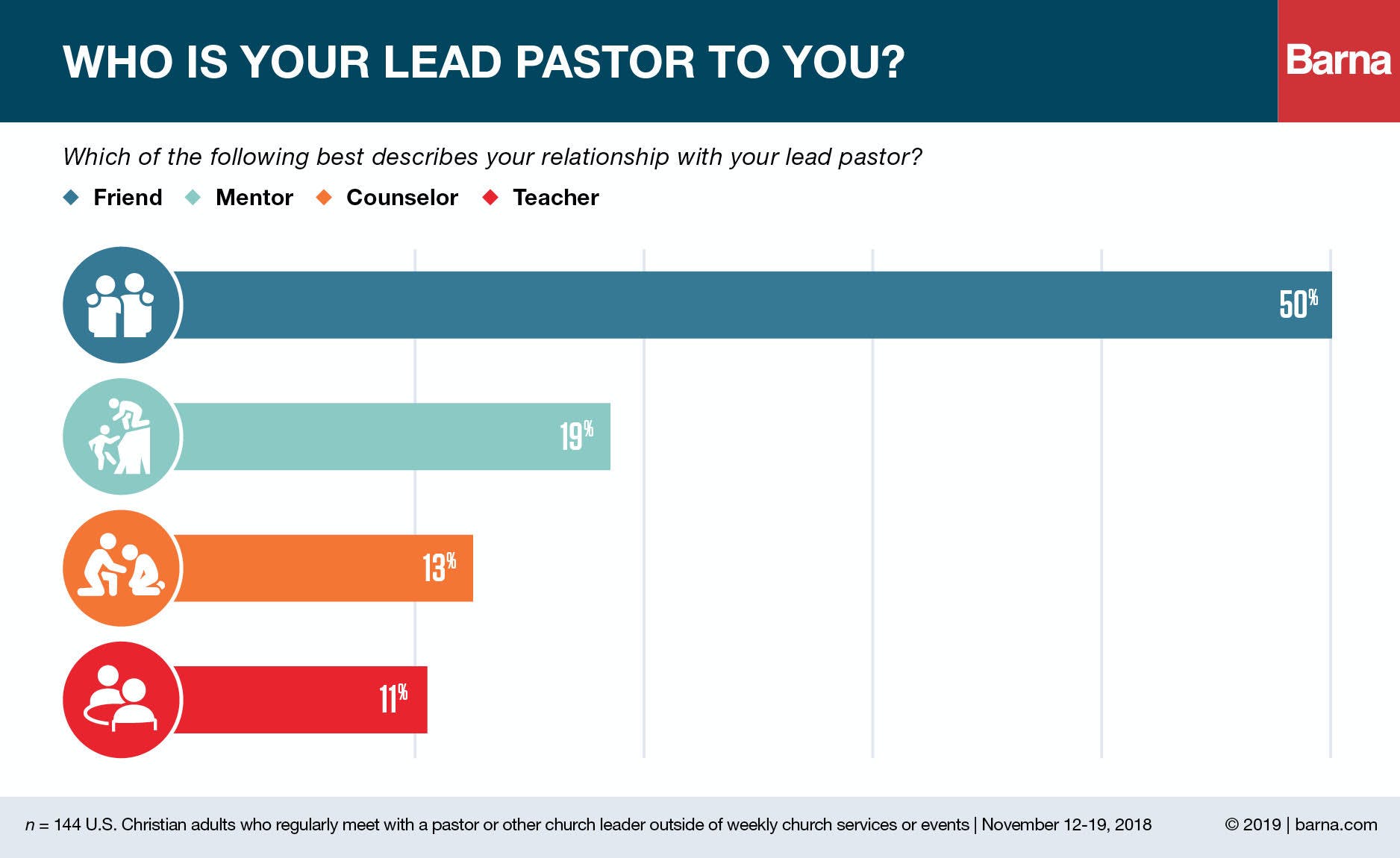 What the Research Means
“Your pastor is more than your church leader,” says Joe Jensen, a former pastor who now works as Director of Strategic Partnerships & Church Engagement at Barna Group. “He or she is also your brother or sister, a fallible human being in need of the same mercy, compassion, companionship and encouragement as you.

“Galatians 6:2 says to ‘carry each other’s burdens,'” Jensen continues. “As a pastor carries the emotional, relational and spiritual burdens of their congregation, they also need spiritual friends to carry their burdens. One of the best ways you can show your appreciation to your pastor is to commit to walk alongside them as they walk alongside you. Be willing to spend time with them without the expectation that they’ll do anything for you. Offer to pray for them and with them without the request for them to pray for you.

“Alleviating the constant need to give without receiving will be life-giving for your pastor,” Jensen concludes. “As a result, they will have more strength and courage to meet your needs and the rest of the congregation’s because they are being poured into themselves.”

About the Research
This study is based on quantitative surveys of 801 U.S. adults who self-identify as Christian. Interviews were completed online and by telephone between November 12-19, 2018. The rate of error is +/- 3.3%, at the 95% percent confidence level.

Churched adults have attended church, other than a special event such as a wedding or funeral, in the past 6 months.

Christians are self-identified Christians, including those who identify as Catholic.

A Snapshot of the Values, Views & Faith of Hispanic Americans

According to the United States Census Bureau, as of 2017, Hispanics made up the largest ethnic minority in the U.S., with 58.9 million Hispanic-Americans representing percent of our national population. This culturally diverse group has roots in a variety of Hispanic countries, the largest percentages hailing from Mexico, Puerto Rico and Cuba, among others. Over the years, Barna has kept up with Hispanic faith trends in the U.S. (and, more recently, abroad). In light of Hispanic Heritage month, observed every year from September 15 to October 15 in celebration of the cultures and histories of the American Latino community, we want to offer a general profile of Hispanic Americans today.