A rundown of some of the major headlines and events of the last month—National Religious Freedom Day, the Women’s March, the March for Life, Karen Pence’s employment at a Christian school accused of discriminating against the LGBT community, a viral video of a confrontation between Catholic high school students and Native Americans, and the new abortion legislation in NY state—is enough to illustrate the many and complicated issues on which religious leaders might speak out today. Though there is widespread agreement among clergy that they have a uniquely important role to play when it comes to preserving religious freedom in the U.S., they are much less certain about just what that role is.

A brand new Barna report, Faith Leadership in a Divided Culture, is the culmination of four years of research examining clergy members’ views on matters of religious liberty in the United States. Specifically, we found that Christian leaders believe discipling Christians around social issues is a critical part of their pastoral responsibility. However, when it comes to some issues in particular, pastors feel a level of sensitivity and pressure in how they approach those topics from the pulpit. A divided and contested American culture raises the stakes for faith leaders as they address many of the controversial issues of the day.

The Role of Clergy in Religious Freedom Debates
Barna has found that even though many people of faith report feeling misunderstood, persecuted, marginalized and extreme in society today, the majority also believes their faith is primarily a positive contribution to society. Large majorities of practicing Christians, and especially Millennials and evangelicals, report two confident attitudes: They feel their faith is a force for good (88%) and that it is essential for society (75%).

This is also true for American faith leaders, regardless of religious tradition. A majority believes their position as clergy gives them a unique and important role to play in society and in preserving religious freedom. The study was primarily conducted among Christian leaders; however, in order to represent the voice of non-Christian faith leaders on issues that affect multiple religions, the research also included clergy from Mormon, Jewish and Islamic traditions. Across the board, most leaders embrace the idea that they have a uniquely important role when it comes to religious freedom, including solid majorities of Protestant non-mainline pastors (72%), Catholic priests (67%), clergy from other traditions (63%) and Protestant mainline pastors (61%). 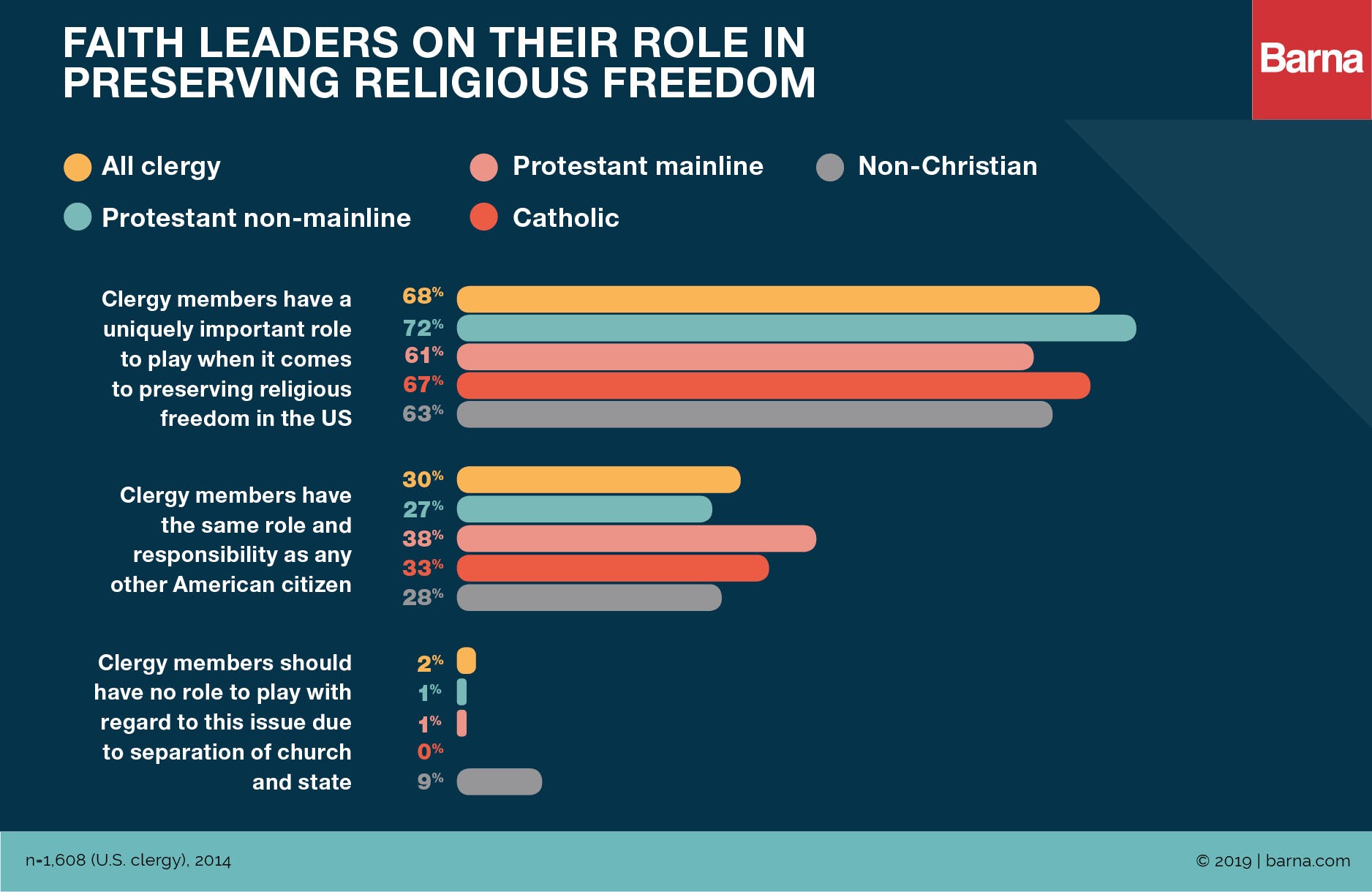 But what, exactly, do faith leaders believe they should do to preserve religious freedom? In the survey, Barna offered Christian pastors a list of specific actions related to social and political engagement and asked whether each action was deemed to be part of their role. While a majority of pastors (65%) says it is a significant part of their role to help their constituents understand the nature of religious freedom in the U.S., far fewer see themselves as responsible for direct political and social engagement. For example, just more than half say it is part of their role to help Christians understand their responsibility to vote on specific issues (53%), and only one in five (21%) says it is part of their job to help Christians understand why they should vote for or against specific candidates. Less than half of Christian pastors (48%) say defending the rights of other religious groups is a major part of their role. 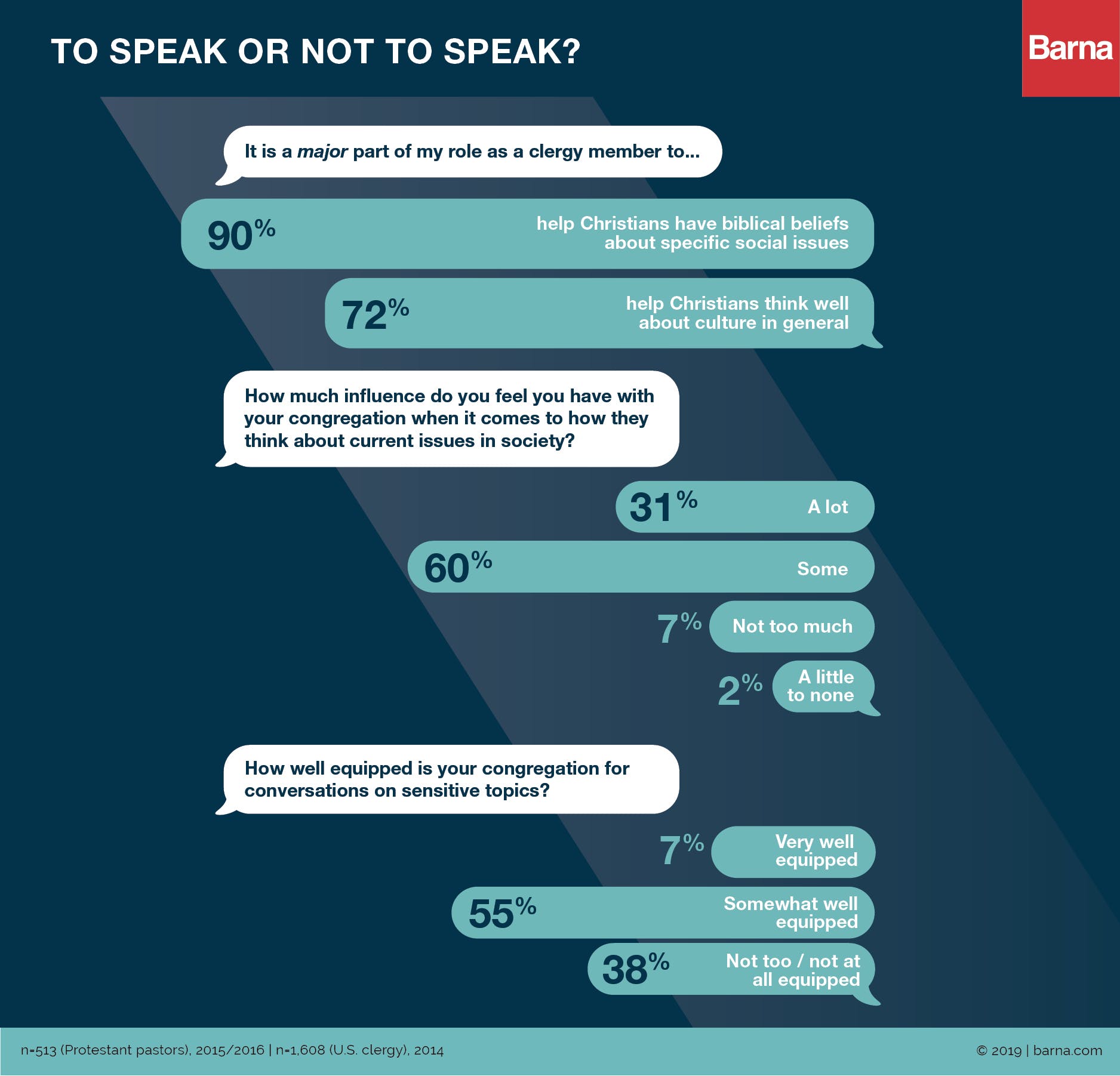 Feeling Reluctant to Speak Out
While most pastors feel it is an important part of their role to help congregants understand the sensitive social and cultural issues of our day, such topics are, well … sensitive. We wanted to know if pastors felt limited or pressured when it comes to speaking about controversial topics. Half of Christian pastors says they frequently (11%) or occasionally (39%) feel limited in their ability to speak out on moral and social issues because people will take offense. The other half of pastors say they only rarely (30%) or never (20%) feel limited in this way. When asked to identify the source of the concerns, pastors are much more likely to say that they feel limited by those inside the church than those outside. In other words, the reactions of those in the pews are most on the minds of today’s pastors.

Again, most pastors say these pressures (69%) and limitations (64%) come from people inside their church. In particular, pressure is on the rise: Between 2014 and 2016, those ministers who feel pressured from inside their church to speak out on cultural issues (even if they’re not yet ready or not comfortable doing so) rose from 44 percent to 69 percent, a marked increase in a short period. 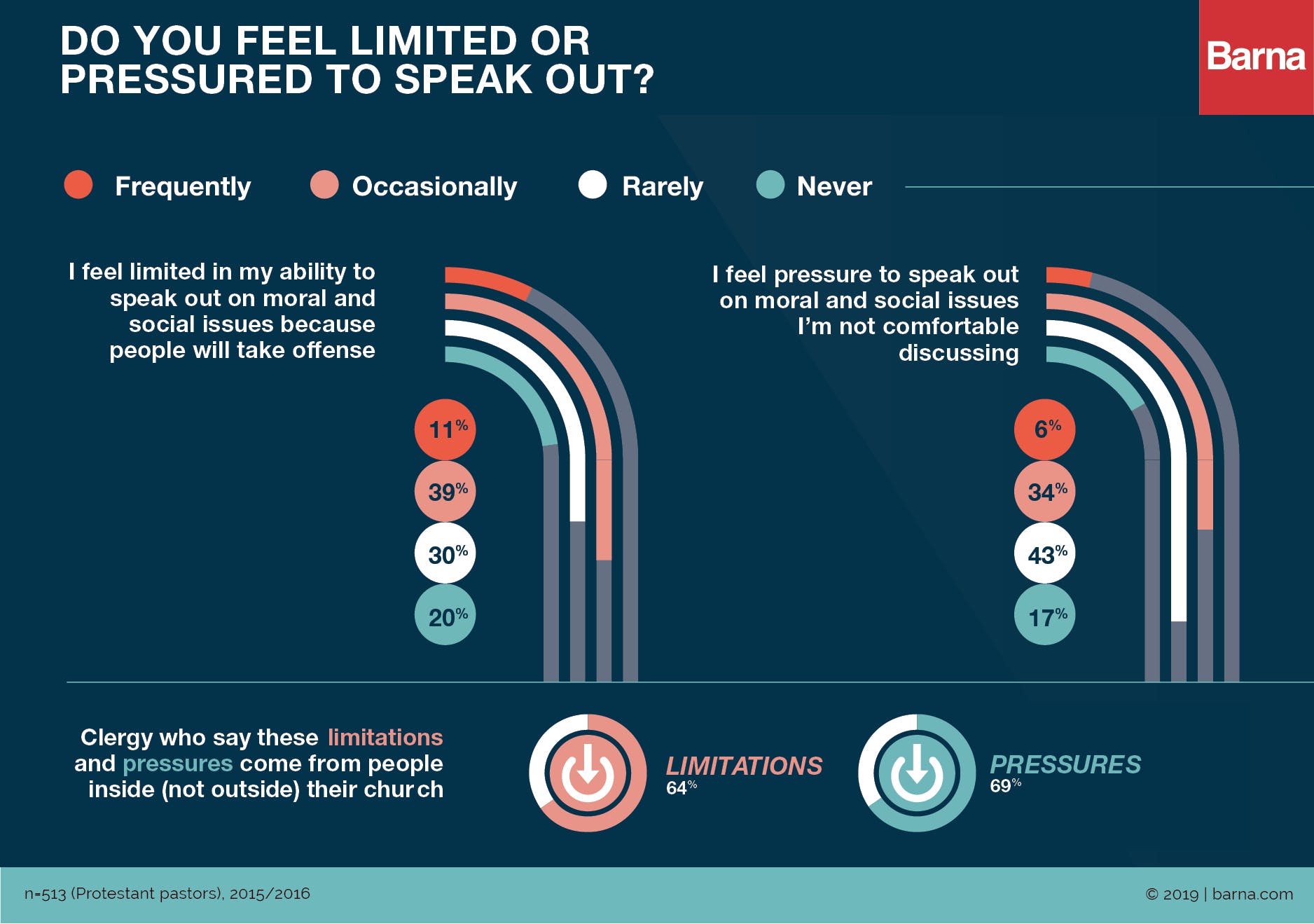 Interestingly, the discussions in which pastors feel limited and pressured mirror each other. They are not only afraid of offending some in their congregation, but also pressured by others to speak up on those very same topics. These hot-button issues run parallel with some of the most significant religious freedom issues of our day, including those related to the LGBT community, same-sex marriage rights, abortion, sexual morality and politics. 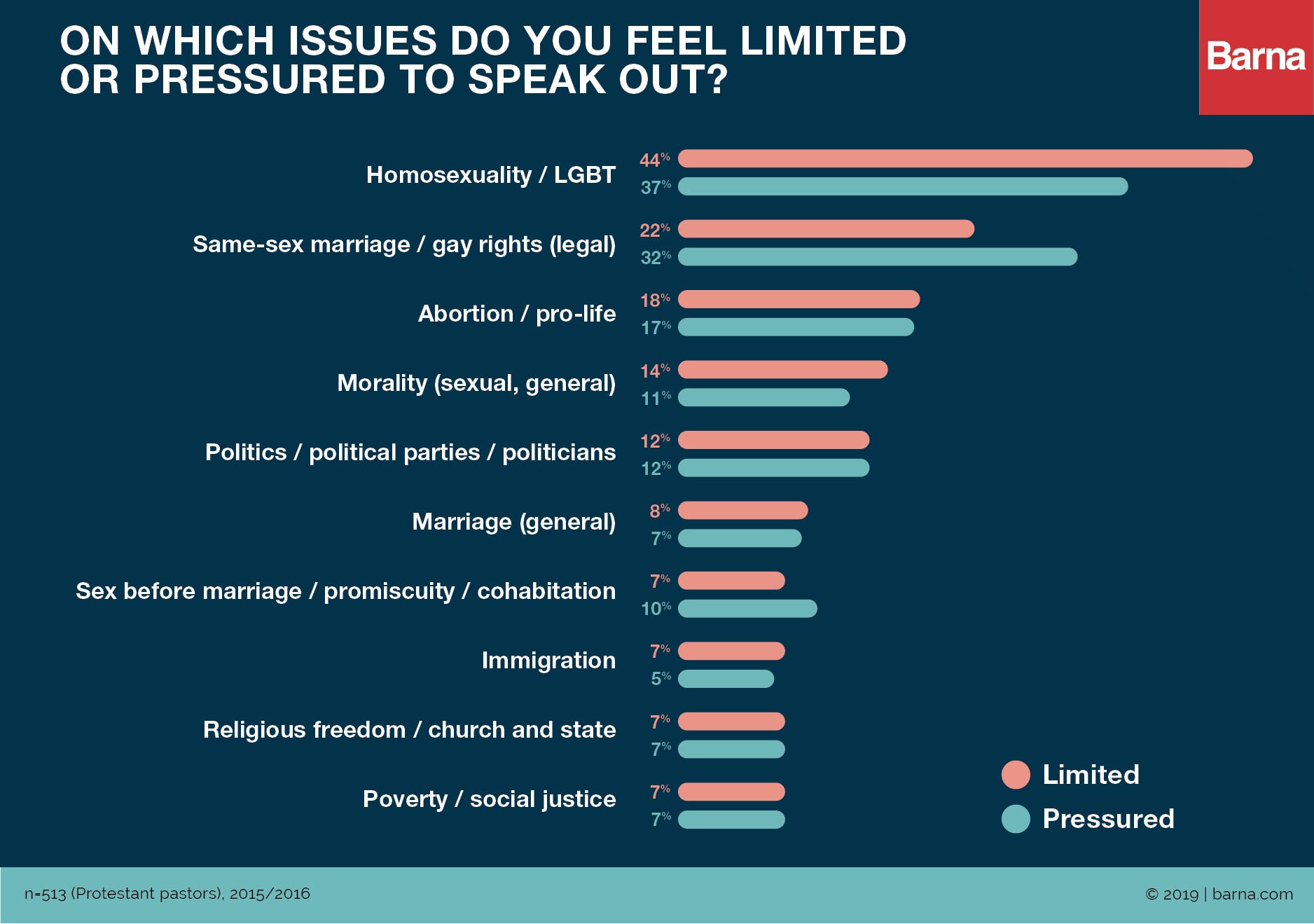 What the Research Means
“Much has changed in the political landscape over the last five years,” says Roxanne Stone, Barna’s editor in chief. “This is one reason we are pleased to have the tracking data available in this report. We’ve been able to capture some of the ways clergy have responded to the cultural and political shifts since 2014.

“Today’s changing, pluralistic society requires a new kind of thinking and approach for Christians—who no longer hold a default majority worldview. In part, this requires a true reckoning with what laws are ‘those of the land’ and which are specific to our religious context. At times this distinction may seem clear. Religious observance of diet, for instance, has not become a cultural fracture. Yet so often those lines are blurred. When spiritual leaders consider which political issues to speak out on, it is important to be certain those issues are a universal good for human flourishing and not a matter of personal discipline, spiritual transformation or church community.

“The pressure for leaders and especially faith leaders to satisfy everyone on all sides, and to avoid offense, is very real today, especially in the digital era,” says Stone. “The public nature of social media only increases the stakes. As the research reveals, the issues pastors feel most pressured to speak out on are the same ones they feel limited to talk about. In other words, the squeeze comes from all sides: those demanding that the church take a stand and those outraged when it does (or outraged when that stance is other than what they’d hoped). As challenging as it may be, faith leaders must work to cultivate humility, discernment and courage in the midst of a divided culture. This is likely to come with a steady dose of challenging those inside the church as much as those outside of it. Pastors must be committed for the long haul, educating and equipping their people to respond with love and conviction, in word and deed. This, after all, is the essence of discipleship.”

About the Research
The statistics and data-based analyses in this study are derived from a series of national public opinion surveys conducted by Barna Group, among 1,608 clergy in the U.S. in 2014, 513 Protestant pastors in the U.S. in 2015 / 2016 and 601 Protestant pastors in the U.S. in 2017. Responses were collected via telephone and online. Once data was collected, minimal statistical weights were applied to several demographic variables to more closely correspond to known national averages. On questions for which tracking was available, findings from these recent studies were compared to Barna’s database of national studies from the past three decades. Data from the clergy study were minimally weighted on denomination and region to more closely reflect the demographic characteristics of churches in each media market. When researchers describe the accuracy of survey results, they usually provide the estimated amount of “sampling error.” This refers to the degree of possible inaccuracy that could be attributed to interviewing a group of people that is not completely representative of the population from which they were drawn. For the general population surveys, the sampling error ranged from 2.7 to 2.9, for religious leaders, it ranged from 2.2 to 3.9. Major portions of this research was supported by the Maclellan Foundation; Barna Group was solely responsible for the design and analysis of the research findings.

U.S. clergy members are leaders in Christian, Jewish, Muslim, Hindu and other religious traditions. They are also referred to as “faith leaders” or just “clergy.”

Non-Christian clergy are leaders in religious traditions other than mainstream Christianity.

Christian clergy are pastors of a congregation in a mainstream tradition of Christianity.

Protestant clergy are pastors of a congregation in a Protestant tradition of Christianity.

Non-mainline clergy pastor in denominations such as charismatic / Pentecostal churches, the Southern Baptist Convention, churches in the Wesleyan-Holiness tradition and non-denominational churches.

African American Protestant pastors are Protestant clergy who lead congregations that are majority black. Barna recruited a robust oversample of these leaders in order to analyze how their views and experiences may be different from the national average.

Photo by Ilyass SEDDOUG on Unsplash

A major finding from our Translating the Great Commission report is that more than half of U.S. churchgoers have not heard of the Great Commission. In this article, experts and practitioners weigh in this surprising statistic and share how the dynamics of spreading the gospel and making disciples are playing out in their respective contexts.