Prayer is not only the most common faith practice among American adults (79% have prayed at least once in the past three months), it’s also one of the most complex and multifaceted. The Bible speaks of numerous kinds of prayers (supplication, intercession, faith, etc.) and uses diverse language to describe the practice. Different traditions and denominations tend to emphasize certain kinds of prayer over others, or even develop and build upon those laid out in scripture. Perhaps the only consistent thing about people’s prayers is that they are different. Americans do not think about approaching prayer in any kind of homogenous way—or even pray to the same deity (if they pray to a higher power at all). A new study from Barna reveals the diverse prayer habits of American adults.

How Do You Most Often Pray?
The forces of our individualistic culture have influenced what was once a more communal and corporate conception of Christian identity to one now focused primarily on the individual. This “personal” faith focus plays out most explicitly in the practice of prayer: almost all American adults (94%) who have prayed at least once in the last three months most often choose to pray by themselves. Not only are most prayers a solo practice, but the vast majority are also most often silent (82% compared to 13% audible and solo prayers). Affirming this shift is the fact that only a very small percentage most often pray audibly with another person or group (2%), or collectively with a church (2%).

Black (27%), Hispanic (16%) and all non-white Americans (20%) are much more likely than white Americans (8%) to be outwardly expressive by praying audibly when alone. This is also true of those in the South where charismatic traditions are more common (17% compared to 9% in the Northeast), and especially true of evangelicals (25%), a quarter of whom pray out loud when they are alone. 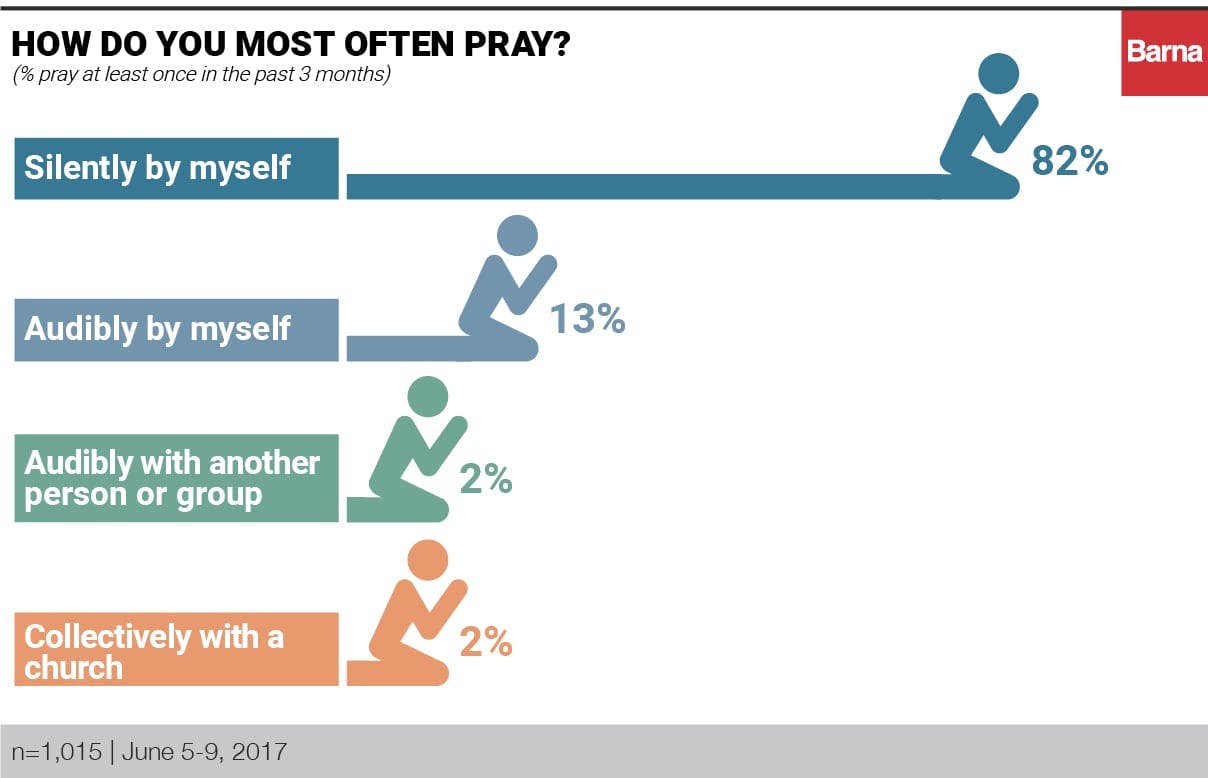 What Is the Content of Your Prayers?
American adults who pray with regularity do so with varying motivations, the most common being to offer “gratitude and thanksgiving” (62%). Generationally, this is lowest among Millennials (53%) and highest among Boomers (71%). An equally popular prayer incentive is the “needs of their family and community” (61%), followed by “personal guidance in crisis” (49%). The latter is most common among those with lower levels of education (49% with a high school diploma or less, compared to 39% of college graduates). 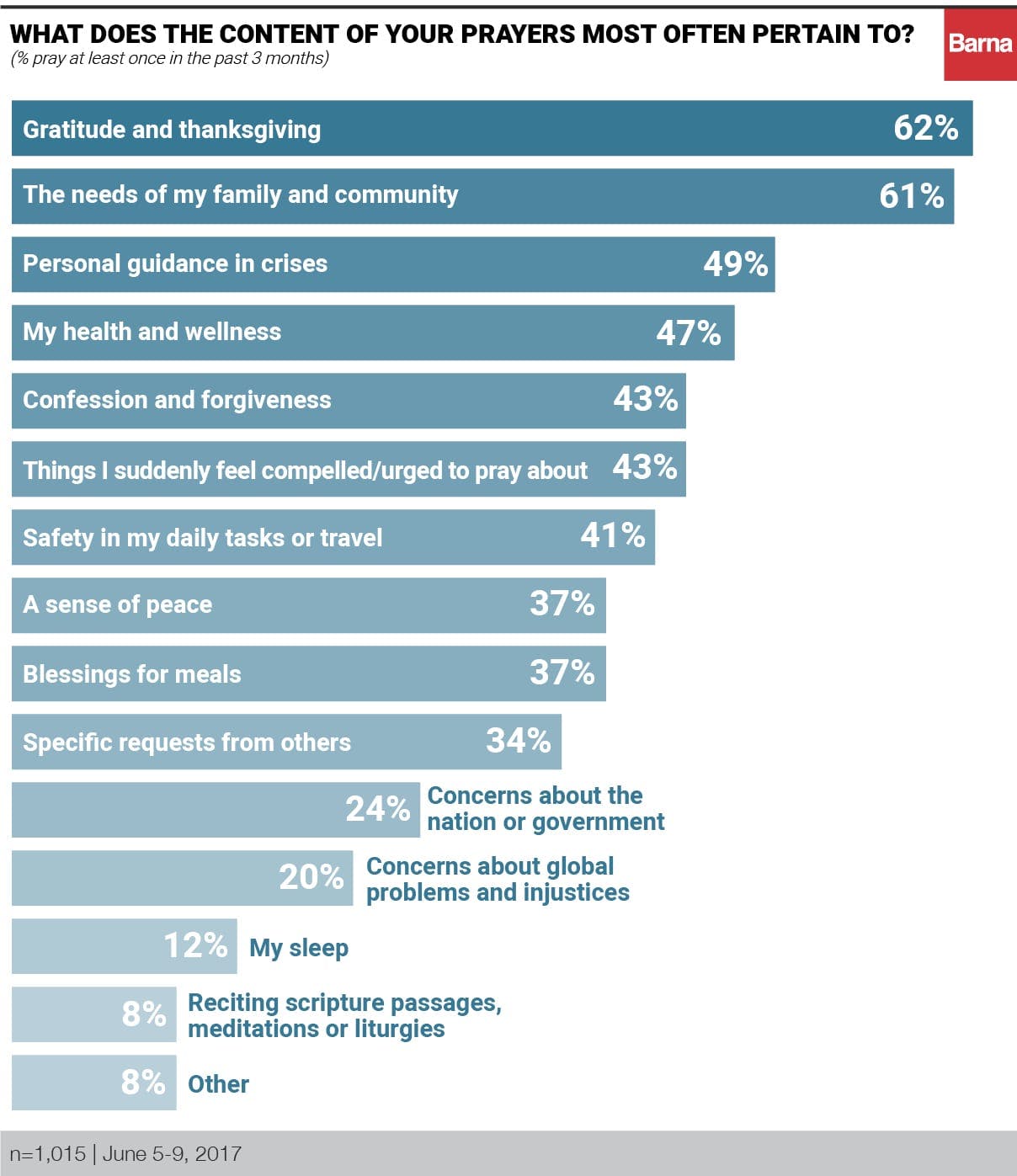 Just less than half of praying adults (47%) most often direct prayers toward their own health and wellness. Facing more frequent health challenges than their younger counterparts, Elders are significantly more likely to pray this type of prayer (68% compared to 38% Millennials). Lower income earners ($50K or less annually) pray for health more than higher income earners ($100K or more), who likely have greater financial resources for both medical coverage and a healthy lifestyle (lower income: 52% compared to higher income: 42%). Wellness prayers are also more common among those who live in rural areas or small towns (55%) than those in cities (46%), where residents may have greater access to services that contribute to health, from gyms and markets to hospitals and pharmacies. 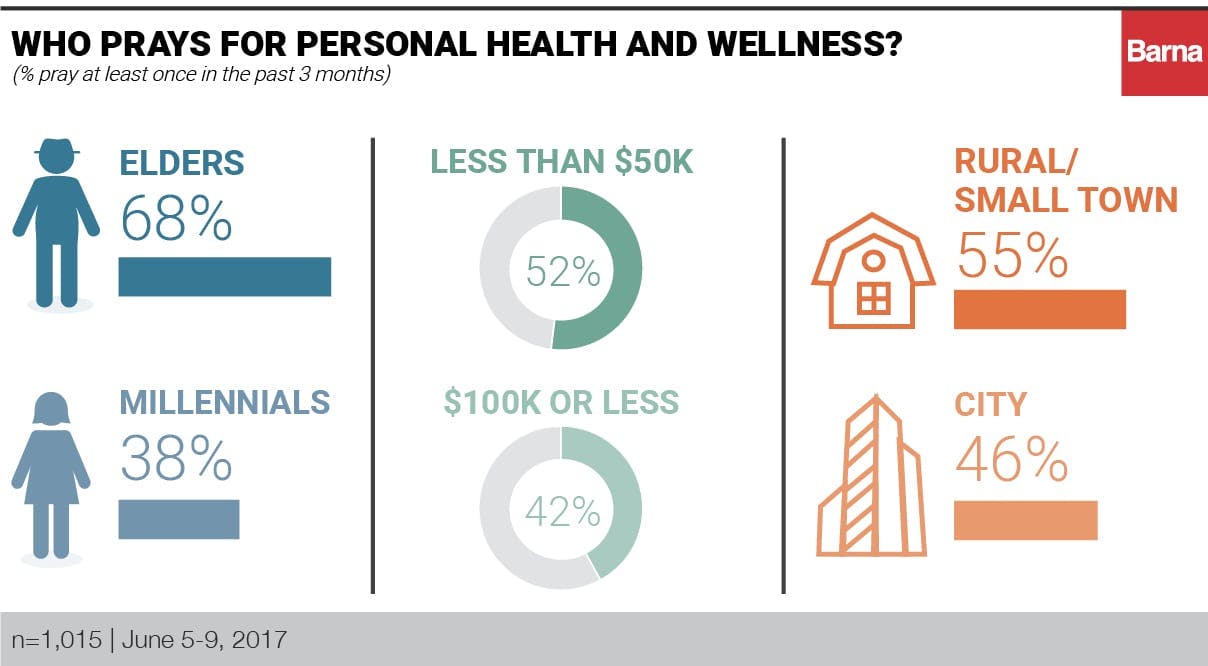 Further down the list is “confession and forgiveness” (43%), followed by “things I suddenly feel compelled or urged to pray about” (43%)—this charismatic bent is more evident among practicing Protestants (56%) than practicing Catholics (33%), and especially strong among evangelicals (71%). Another common prayer is for “safety in daily tasks or travel” (41%). This is prayed much more frequently among black (51%) and Hispanic (51%) Americans than white Americans (36%). While this particular study doesn’t point to specific safety threats, Barna’s other research on race demonstrates the unique challenges of people of color in America, and Barna’s research on perceptions of police brutality shows black and minority communities fear facing prejudicial treatment from law enforcement.

Praying for “a sense of peace” makes up the content of more than one-third of prayers (37%). Perhaps unsurprisingly, those with children under the age of 18 pray this the most (43% compared to 34% without children under 18). Having children around and being responsible for their wellbeing can easily disrupt a parent’s sense of peace. Those who live in noisy cities (43%) are also prone to include this in prayer, more so than those who live in quieter rural areas or small towns (29%). Praying a “blessing for meals” is equally as common (37%), as well as “requests people have specifically asked me to pray for” (34%). “Will you pray for me?” is a common request—and certainly many people agree to pray when asked. But how many are following through on such commitments? The generation most willing to cover prayer requests from others are Elders (47%), who are almost twice as likely to do so than Millennials (27%). 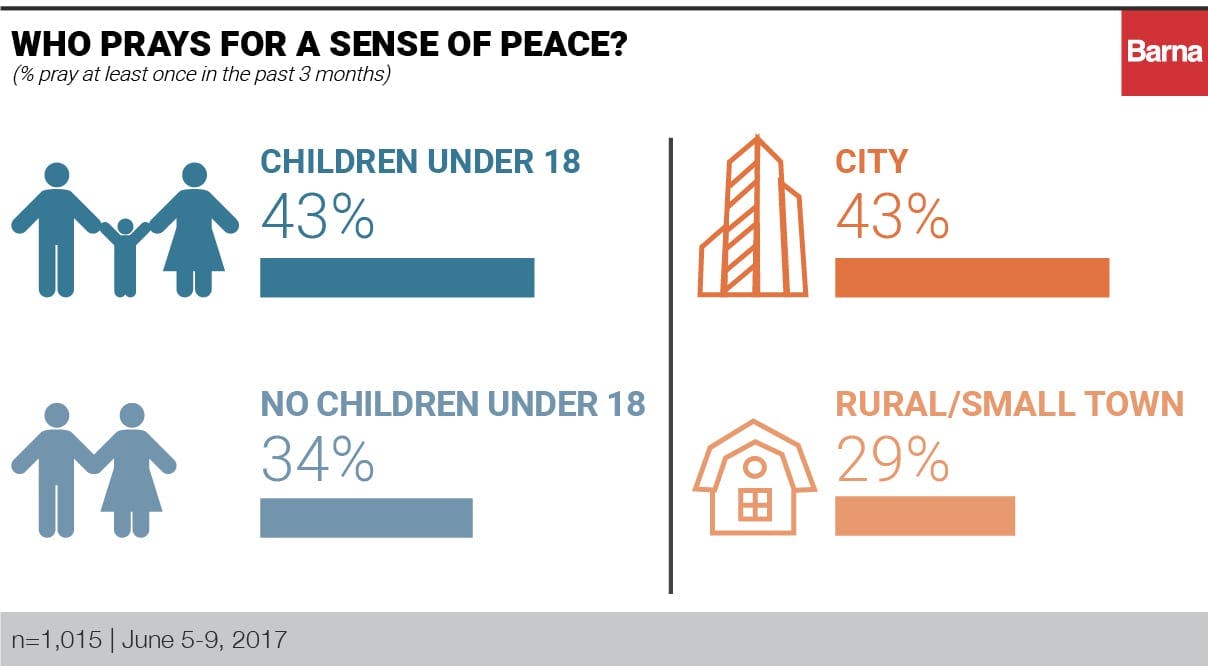 How Are Spiritual Leaders Doing Today?

Deeper global or political concerns draw less focus from praying adults. For instance, only one-quarter (24%) most often pray about their concerns for the “nation or government.” But some groups still make a point to spiritually emphasize their concerns about the country and its leadership. Such prayers are more common among Elders (43% compared to 19% of Millennials), those with less education (26% compared to 17% of college graduates), black Americans (33% compared to 25% of white Americans), and conservatives (29% compared to 20% of liberals). 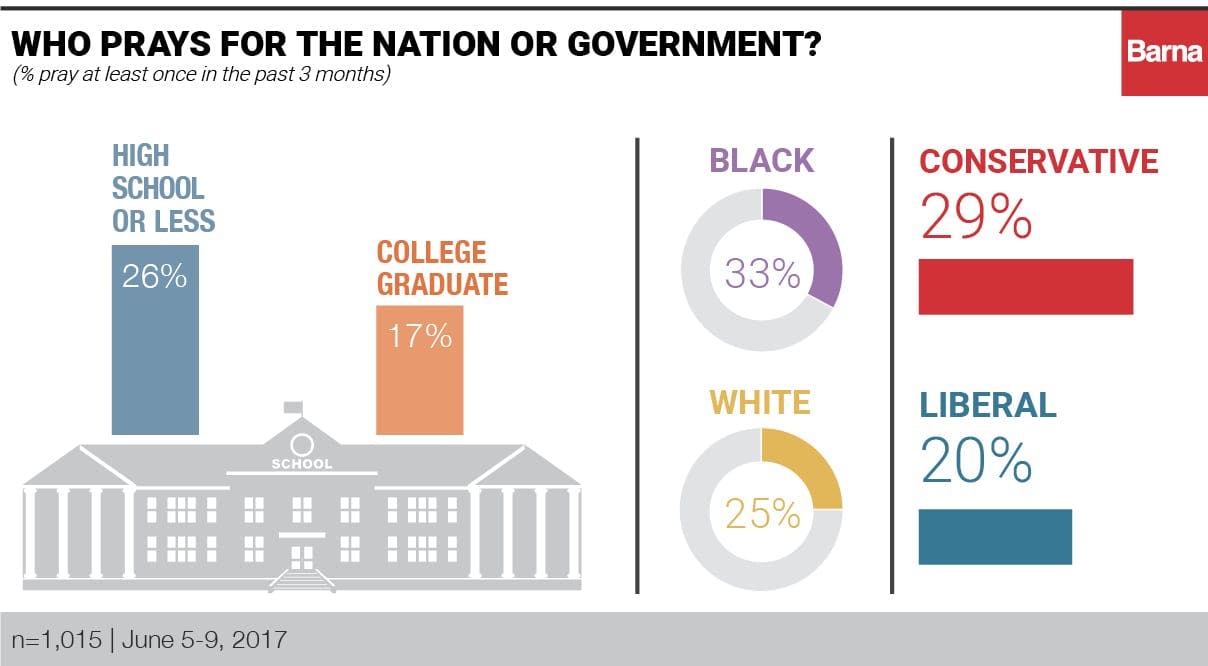 When it comes to “global problems and injustices,” only one-fifth (20%) most often pray specifically for these issues. Black Americans are again more likely to be concerned (27% compared to 19% of white Americans). Looking at political ideology, liberals are more concerned about global problems than conservatives (26% and 18% respectively).

Only one in five praying adults pray most often for global problems and injustices. Click To Tweet

Though bedtime prayers get a lot of attention in childhood, only 12 percent of praying adults pray most often for their sleep. Interestingly, one-fifth (19%) of Millennials pray for their sleep, perhaps a product of the busy and transitional season of life in which many Millennials currently find themselves. On the other hand, only 1 percent of Elders, many of whom are likely to be retired, pray for rest. Given the many demands of raising kids, whether babies or teens, parents with children under 18 (19%) are also likely to pray for sleep. 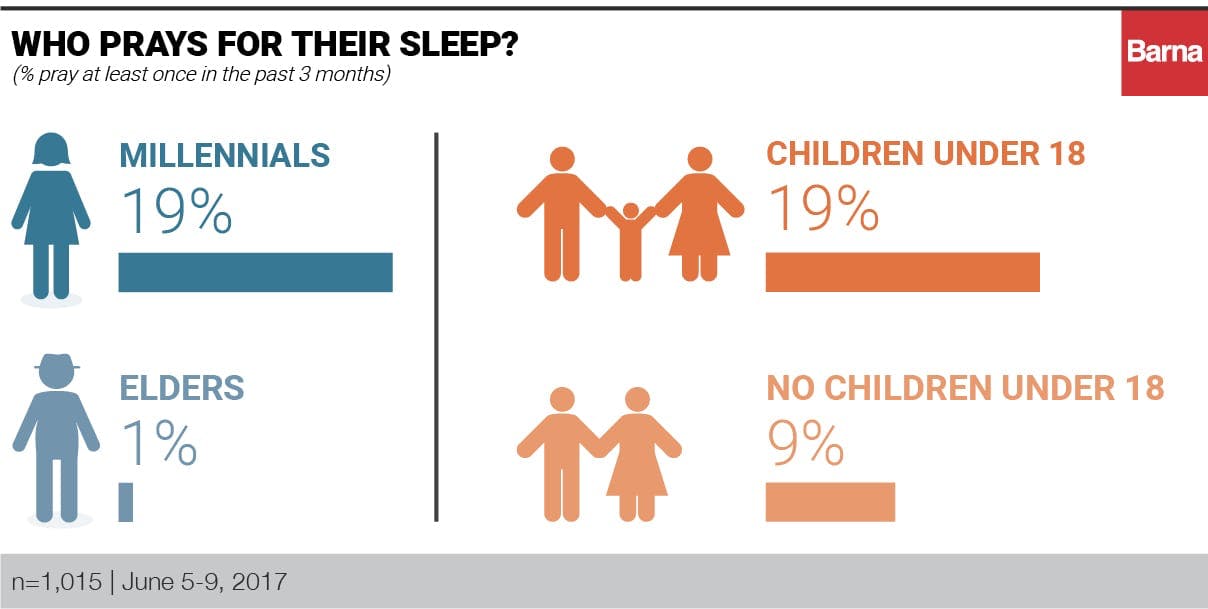 In terms of broader trends, women are more likely than men to cover each category of prayer content in the survey. Their top prayers are “gratitude and thanksgiving” (69%), “the needs of my family and community” (67%) and “personal guidance in crises” (55%). Evangelicals, one of the most active faith groups, are also the most likely to be praying with enthusiasm in each category. They are especially active in prayer for “the needs of my family and community” (89%), “gratitude and thanksgiving” (86%) and “confession and forgiveness” (77%).

To Whom / What Do You Pray?
Though the vast majority of praying adults (89%) direct their prayers to “God,” they don’t all pray to the same god (if they pray to a deity at all). Praying to “God” is by far the most common response among almost every segment, even between the most active church attenders and unchurched adults, both of which are just as likely to pray to God (89% and 88% respectively). But as no specific definition was given for “God,” the widespread response may be a product of an equally wide interpretation. As the options get more specific, the numbers drop. For instance, only half of praying adults (50%) pray to Jesus, and less than one-quarter (23%) pray to the Holy Spirit. 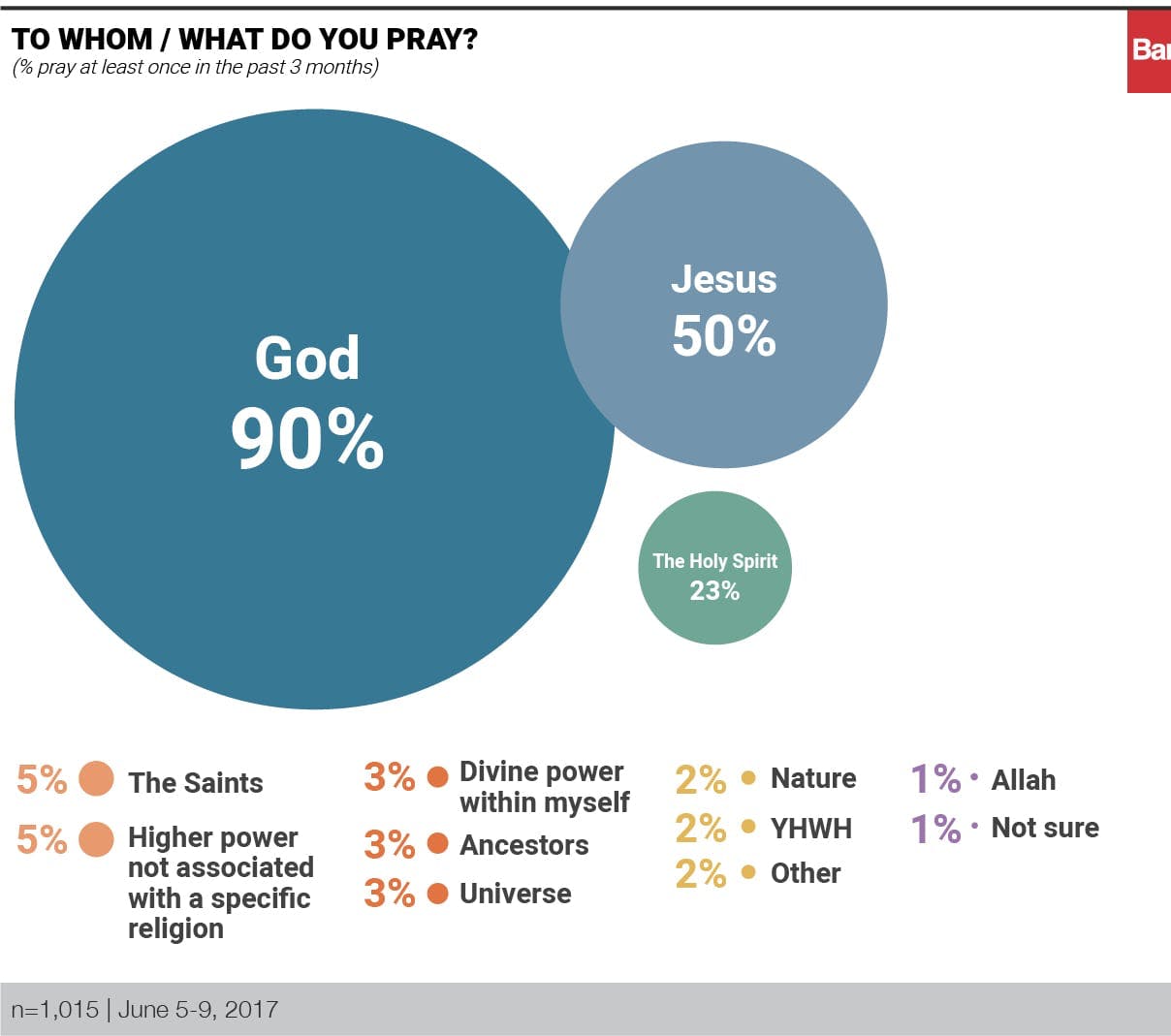 Small percentages pray to the Saints (5%), a higher power that is not associated with a specific religion (5%), ancestors (3%), the universe (3%), divine power within themselves (3%), nature (2%), YHWH (2%) and Allah (1%). There are a few standouts here worth noting. For example, a larger than average amount of Hispanic Americans (10%) pray to their ancestors. Americans who aren’t Christians are more inclined than any other group to pray to a higher power that they do not associate with a specific religion. This includes those who claim no faith (28%), those who don’t self-identify as Christian (25%), and those of other faiths (15%). Those who follow religions other than Christianity are most likely to say they pray to the universe (13%) and nature (12%).

What the Research Means
“Prayer is by far the most common spiritual practice among Americans,” notes Roxanne Stone, Barna’s editor in chief. “The vast majority of Americans—no matter their religious affiliation or non-affiliation—participate in some kind of prayer activity. Barna has found this to be true consistently over the last several decades. The numbers have barely changed from year to year. Which made us wonder: what do people mean by prayer? What do these prayers actually look like? And who are they praying to?”

“These are the questions that drove this particular study,” says Stone. “What we found gives us a much more nuanced portrait of the American prayer life. The most notable aspect of which is it’s individual quality. People pray mostly alone—it is a solitary activity defined primarily by the immediate needs and concerns of the individual. Corporate prayer and corporate needs are less compelling drivers in people’s prayer lives.”

“For spiritual leaders, there is good news here as well as areas for renewed emphasis,” points out Stone. “The good news: People have active and personal prayer lives. They are engaging with God outside their houses of worship and around the most intimate and vulnerable areas of their lives. But what would it look like to begin to broaden the scope of those prayer lives? To consider the power of corporate prayer—when more than one are gathered in God’s name? How can we turn our collective prayers toward broader world issues and injustices? How do our prayers help others in times of crisis?”

“Such questions can enliven prayer lives and embolden people to believe the power of their prayer,” asserts Stone. “People are praying—they are finding purpose and solace in those prayers. This seems a wonderful foundation on which to go deeper into the meaning and practice of prayer.”

10 Facts About Faith in American Cities

While national faith trends dominate the headlines, they often belie the diverse religious makeup of cities and metro areas throughout the country. To celebrate the release of Barna's Cities & States report, which takes a comprehensive look at the faith profiles of these cities, we've compiled 10 interesting findings on spiritual beliefs and practices among American adults.