You are reading a free research sample of Cities

As Valentine’s Day is upon us, we are reminded just how much has changed about romantic ideals in the last two decades (even in the Church). As Barna has reported, the percentage of single people in America continues to grow, “dating” and “cohabiting” have become increasingly synonymous, and online dating has shifted the possibilities of finding love. Even so, this is a day typically celebrated with that “special someone.” Where is there a greater likelihood that Christians have already committed to that someone? Or, if unmarried, where might practicing Christians find a large pool of single peers?

Over the years, Barna has been tracking the relationship status of practicing Christians in America and publishing this data in our Cities reports. In the charts below, we list the top 10 American cities where practicing Christians (those who attend a religious service at least once a month, who say their faith is very important in their lives and self-identify as a Christian) are most likely to be married and most likely to be single (never married). 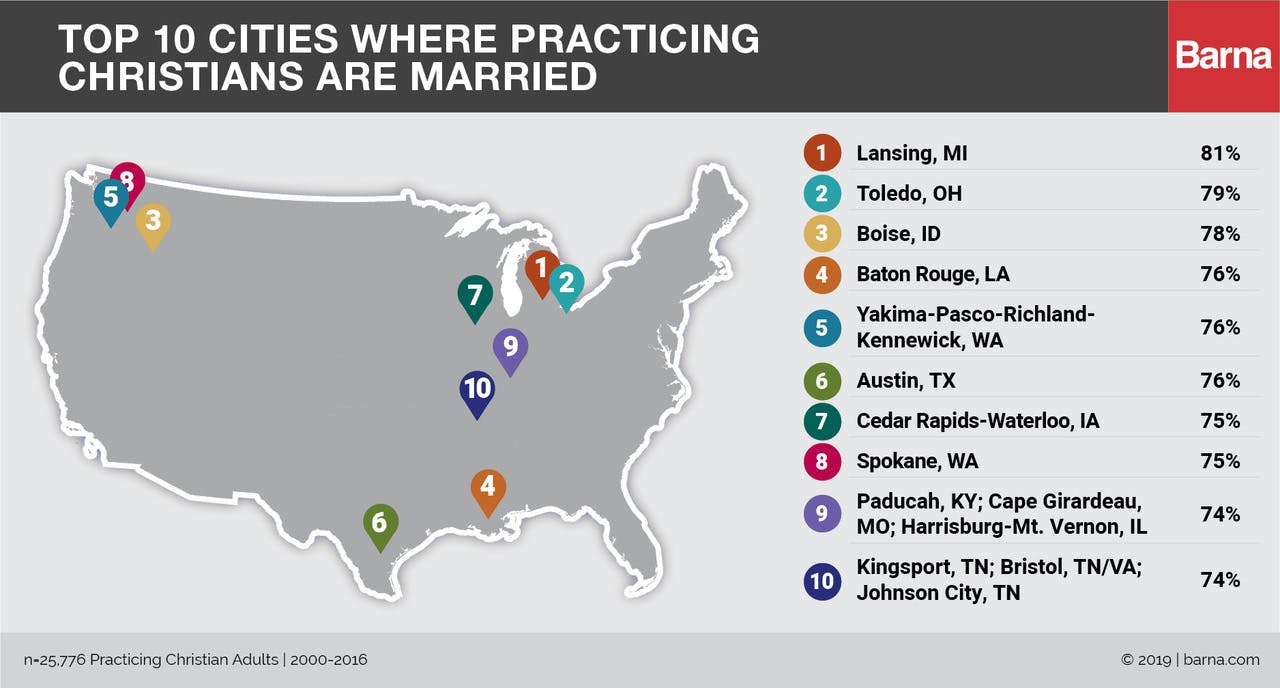 According to Barna’s most recent data, the Midwest is where we find the highest rates of marriage among practicing Christians. Over eight in 10 (81%) in Lansing, MI are married—much higher than the national average of 52 percent. Lansing is followed closely by another Midwest city, Toledo, OH (79%). From there, the rest of the top cities with the highest rates of marriage among practicing Christians are: Boise, ID (78%), Baton Rouge, LA (76%), Yakima-Pasco-Richland-Kennewick, WA (76%), Austin, TX (76%), Cedar Rapids-Waterloo, IA (75%), Spokane, WA (75%), Paducah, KY; Cape Girardeau, MO; Harrisburg-Mt. Vernon, IL (74%) and Kingsport, TN; Bristol, TN/VA; Johnson City, TN (74%). The Midwest and the South usually have larger populations of practicing Christians and evangelicals, who tend to marry sooner and more often than their less religious counterparts. The populations in these regions also tend to be much older than the coastal cities and urban centers, explaining the higher concentration of married couples. 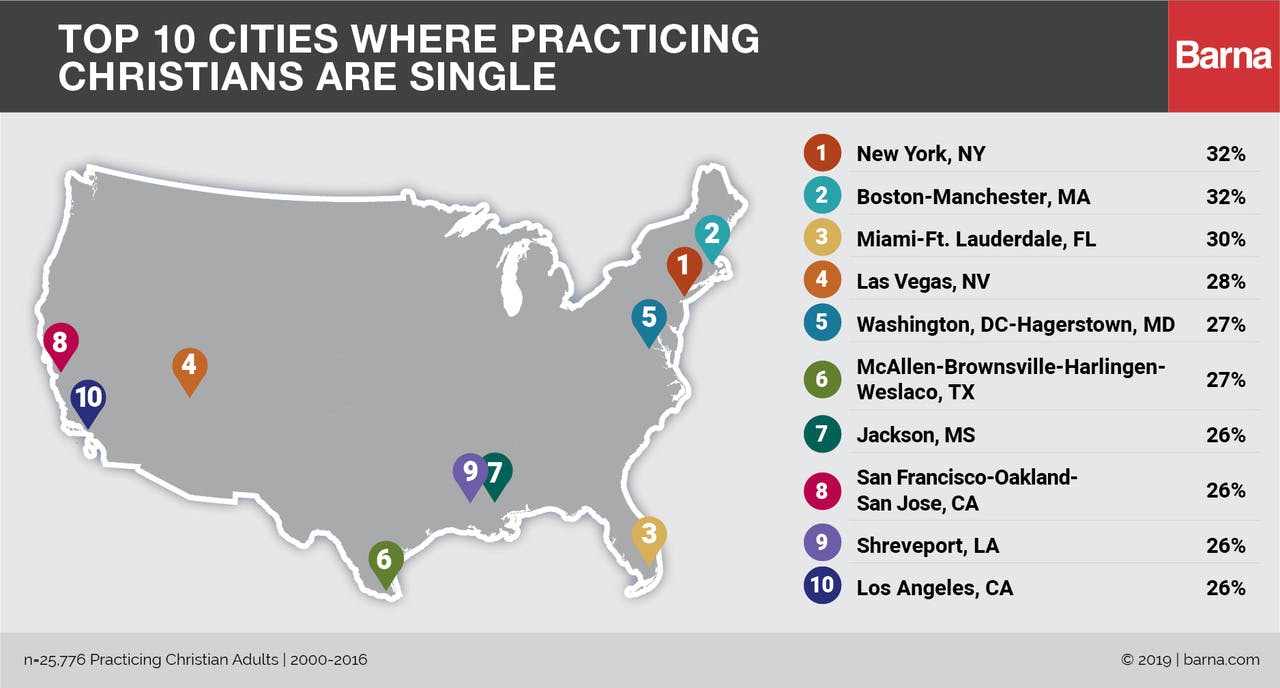 Big urban centers and the East Coast are largely absent from the ranking of places where Christians are usually married, so it follows that these cities are most likely to house single practicing Christians (those who identify as “never married”). The country’s largest city, New York, NY (32%) tops the list, followed closely by Boston-Manchester, MA (32%) and Miami-Ft. Lauderdale, FL (30%). Las Vegas, NV (28%) is the only non-East coast city in the top five, followed by Washington, DC-Hagerstown, MD (27%). The next five cities are a mix of Southern and Californian cities: McAllen-Brownsville-Harlingen-Weslaco, TX (27%), Jackson, MS (26%), San Francisco-Oakland-San Jose, CA (26%), Shreveport, LA (26%) and Los Angeles, CA (26%). Cities like New York, especially on the East Coast are some of the most post-Christian cities in America and prioritize marriage less than the more conservative, religious regions of the country. They are also home to and tend to attract younger Americans, particularly young professionals, who today are delaying marriage to focus on building their career.

Charts in this article have been updated to correct a previous error in sample details.

About the Research
The data reported in this resource are based on telephone and online interviews with nationwide random samples of 76,505 adults conducted over a seven-year period, ending in April 2016. The maximum margin of sampling error associated with the aggregate sample is plus or minus 0.4 percentage points at the 95 percent confidence level. The data were analyzed by DMA. The label “DMA” stands for Designated Market Area and represents a unique geographic area that also serves as a commonly accepted media market as defined by The Nielsen Company. DMAs have been configured so that the entire U.S. is assigned to one—and only one—of 210 DMAs in the country and are based on the television viewing habits of the residents in each county. While there are 210 DMAs, this table contains data for the top 100 markets.

Photo by Clem Onojeghuo on Unsplash

You are reading a free research sample of Cities

A new Barna report, Reviving Evangelism, looks at the faith-sharing experiences and expectations of Christians and non-Christians alike. Among the major findings in this report is the revelation that Christian Millennials feel conflicted about evangelism—and, in fact, almost half believe it is wrong to share their faith.