Half of Practicing Christians Say History of Slavery Still Impacts the U.S.

You are reading a free research sample of Where Do We Go From Here?

This summer marks 400 years since European colonists purchased and enslaved Africans in Jamestown, Virginia. In the span of those four centuries, the history of racial injustice in the United States toward black Americans has been tumultuous. There has been contentious debate in recent years (or recent days, even) about the hardships that black Americans still experience, from mass incarceration to lagging maternal health. In the past week alone, social media has been filled with statements from a historic congressional hearing on reparations.

So what do U.S. adults—and in particular practicing Christians—believe about the lived experience of black Americans today, in light of this history of injustice? For a recent study on race and equality in America, conducted in partnership with The Reimagine Group, Barna set out to contribute to a broader understanding of race relations in our present moment and equip church leaders with context for challenging conversations. The findings of that study are now available in the new report Where Do We Go from Here?: How U.S. Christians feel about racism and what they believe it will take to move forward. This special resource assesses perceptions of the nation’s reputation and what practicing Christians—across racial, denominational and political fault lines—feel should be done to repair the damage. Further, Where Do We Go from Here? represents not only views in the U.S. and the Church at large, but also insights and recommendations from a panel of scholars and faith leaders, including: Claude Alexander, Andy Crouch, Heather Thompson Day, Craig Garriott, Maria Garriott, Stan Long, Bryan Loritts, Eric Mason, Nicola A. Menzie, Russell Moore, Alexia Salvatierra, Mark E. Strong, Nikki Toyama-Szeto, Michael Wear and Randy Woodley.

This article takes a look at some of the foundations of this research: whether Christians see the past connecting to the present, why opinions vary by age and ethnicity and how pastors may influence this conversation.

Half of Practicing Christians See Ongoing Ramifications of Slavery Era
Barna asked respondents whether they agree the history of slavery in the U.S. still has a significant impact on black Americans today. Half of practicing Christians (50%) “mostly or totally” acknowledge ongoing repercussions, slightly ahead of the proportion of the general population who feel this way (46%). Just over a quarter of practicing Christians (28%) says the U.S. has moved past this shameful part of its history, also on par with the national average (28%).

A sizeable percentage of practicing Christians has not reached a conclusion; 16 percent are unsure, and 7 percent have yet to consider the matter. This too is on track with percentages among all Americans (18% are unsure, 9% have not considered). It may be that some are beginning to weigh whether America’s past negatively impacts the black community today. The data show this group still believes that non-white groups in general experience undeserved hardships at some frequency (82% say this occurs at least sometimes). 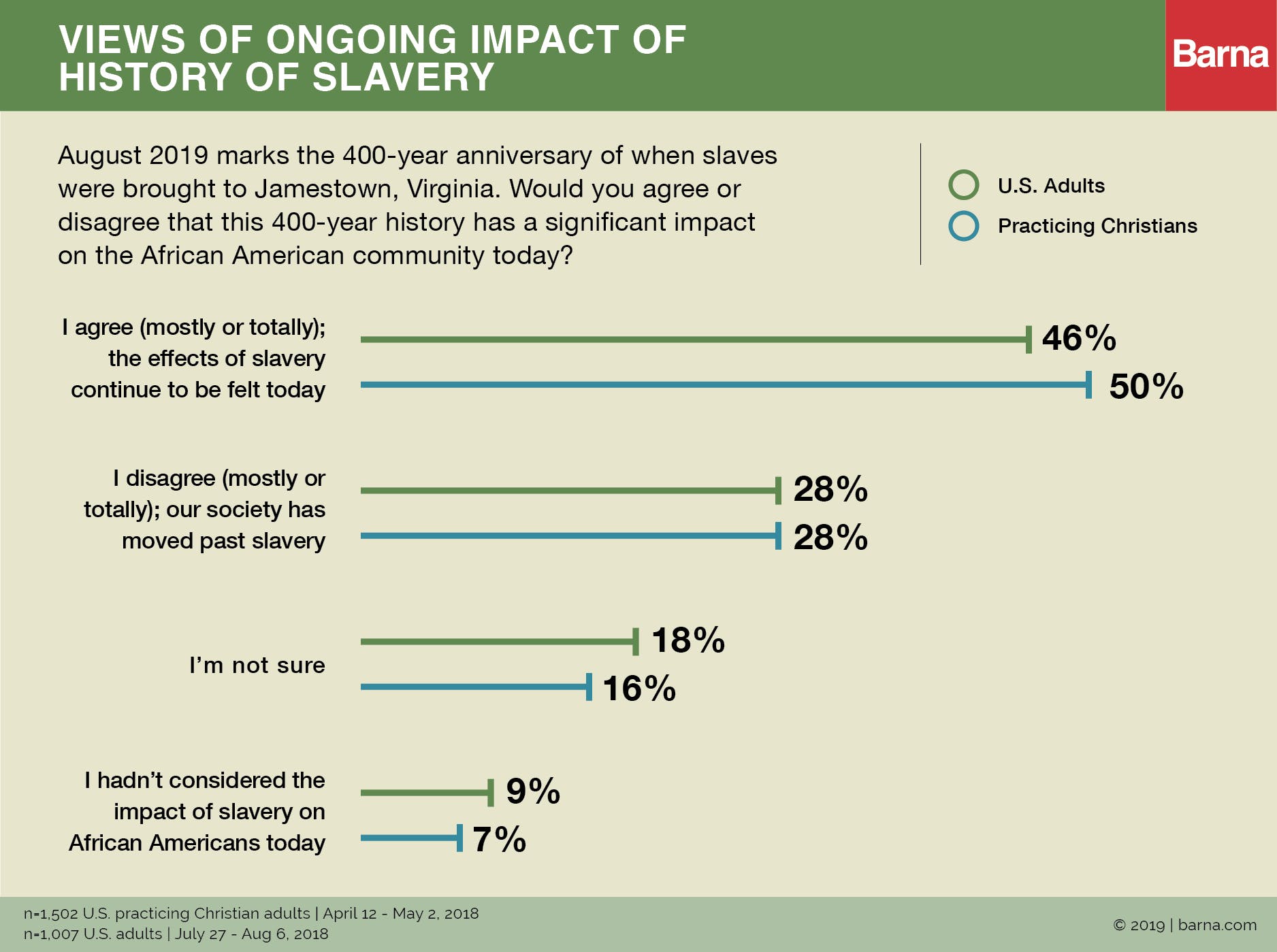 Different Views Emerge Across Races & Generations
While some practicing Christians perceive the history of mistreatment of black Americans to be just that—history—the majority of black Christians feels differently on this issue. There is little doubt among them that slavery has left a lasting impact on their community (79% agree “mostly” / “totally”). A minority, one in 10, disagrees or doesn’t know (9% each). White respondents are the least likely racial group to agree that slavery’s effects can still be felt today; just 42 percent say this is the case. One-third of white practicing Christians (34%) feels the country is beyond the fallout of slavery. One-quarter is uncertain (18%) or hasn’t thought about it (7%). 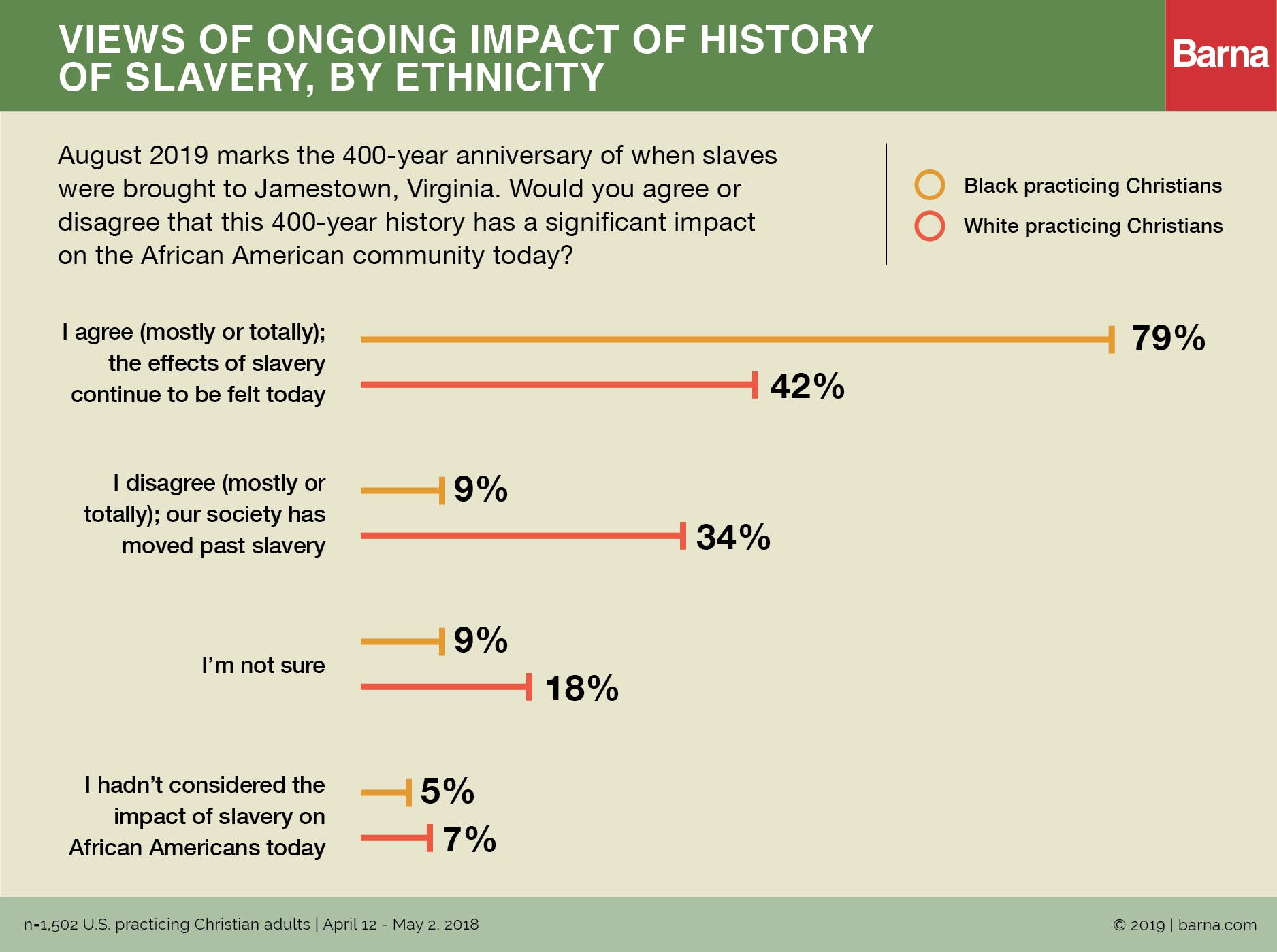 Looking at age groups, Millennials appear to be the most sensitive to these conversations, even though they are the farthest removed from the civil rights era. Among practicing Christians, they are the generation most likely to report being aware of effects of slavery on our present-day society (65% vs. 55% of Gen X, 40% of Boomers, 41% of Elders). Only 2 percent of Millennials haven’t considered the impact of slavery on black Americans today. This could be because, as this and other Barna studies show, Millennials (and Gen Z beyond them) are more likely to represent a multiethnic community. 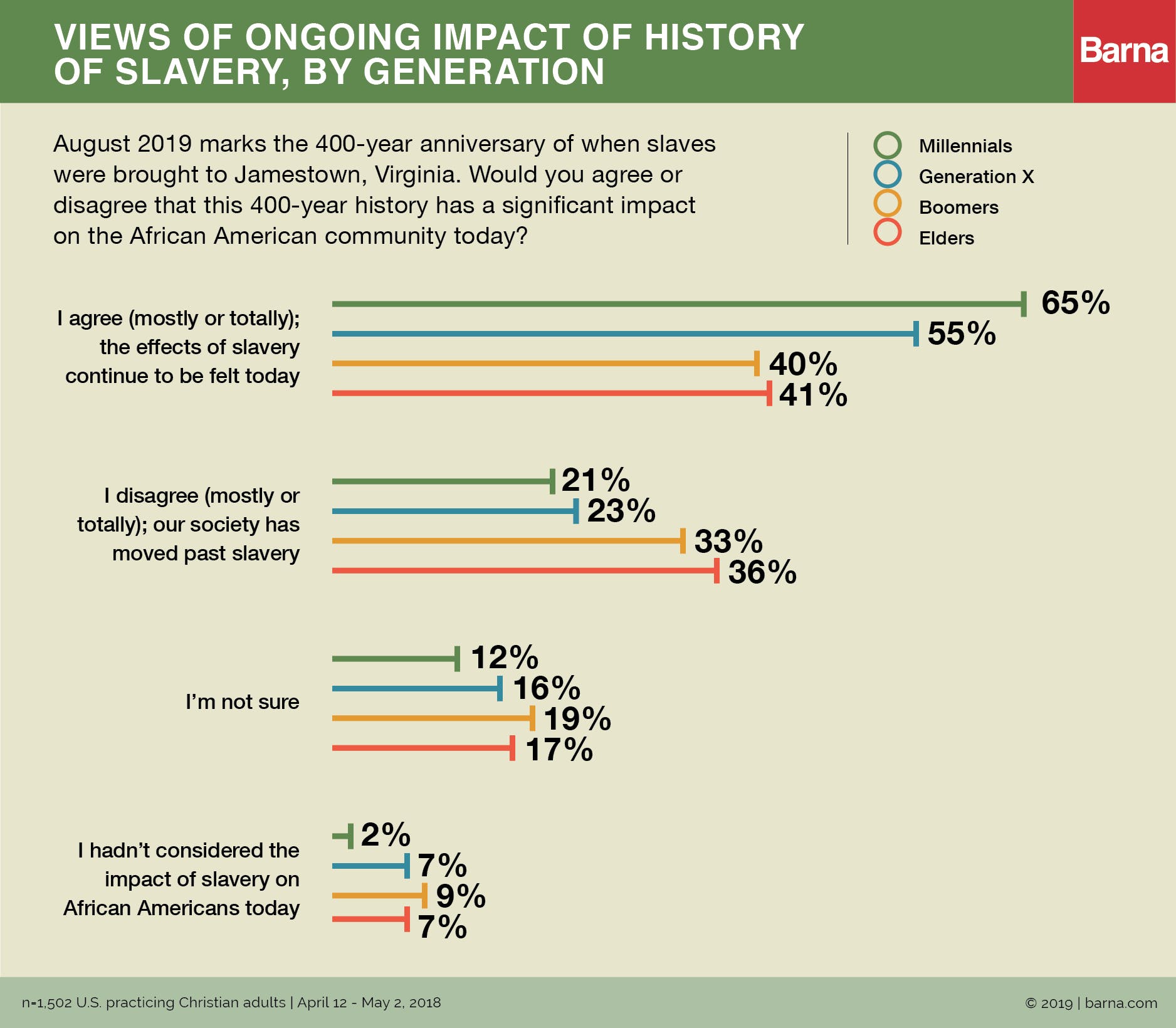 Church teachings may be related to how attendees approach this discussion. Practicing Christians whose churches “never” teach about justice are more likely than practicing Christians who “constantly” hear justice messages at church to say they either haven’t seen or haven’t considered the impact of slavery today (58% vs. 28%). Meanwhile, respondents in justice-oriented churches are more likely (59% vs. 33% of practicing Christians who never hear justice messages) to agree the slavery era has complicated life for black Americans. Whether pastors influence views of congregants, or congregants seek out pastors with similar views, this finding at least suggests that pastors are to be counted among leaders moving toward racial reconciliation.

Alongside new data, analysis and infographics from Barna, Where Do We Go from Here? features insights from a range of scholars and faith leaders. Below are some relevant excerpts from that panel’s commentary, in light of the findings mentioned above:

“Churches need to preach on racial issues and return to preach on them again and again. This is part of spiritual formation, and like oth­er formation issues—prayer, discipleship, generosity—it demands emphasis and reg­ular, strong teaching.” — Mark E. Strong, lead pastor of Life Change Church

“Part of the generational gap comes down to remembering how much worse, as a whole, things used to be. But although our nation’s racism and prejudice is more subtle today, it is just as real. And because it’s so subtle, it’s easy for the very people who are perpetuating it to not realize what’s happening.” — Stanley Long, interim pastor of Faith Christian Fellowship

“The generational gap reflects how history was taught in our public educational school system. The history taught in school today—United States history, European history, colonialism, etc.—is likely to be from a different perspective than what was taught to Boomers and Elders. I think we all need the hope and the confidence of the Millennials.” — Nikki Toyama-Szeto, executive director of Evangelicals for Social Action

“Millennials recognize the world is multiethnic and wonder why their churches aren’t. They are hungry for au­thentic relationships, and a faith that ac­tively engages with the world.” — Maria Garriott, author and consultant for Parakaleo

“What happens in the larger construct of our nation must also have ripples within the microcosm of the Church. Pastors and church leaders have a responsibility and the opportunity to restore the image of a loving God within their communities—a God that shows compassion for the vulnerable and is always near to the brokenhearted.” — Dr. Heather Thompson Day, associate professor of communication at Andrews University

About the Research
This study is based on quantitative surveys of 1,007 U.S. adults, 1,502 U.S. practicing Christian adults. Interviews were completed online between April and August, 2018. The rate of error is +/- 2.3 percent for practicing Christians and 2.9 percent for the general population, at the 95 percent confidence level.

You are reading a free research sample of Where Do We Go From Here?

New Barna research, commissioned by Thrivent, examines giving trends among practicing Christian adults in the U.S. In this new data, we look at multiple expressions of generosity in the Church—monetary and more—and the complex motivations for giving, which tend to vary by age and life stage.