This month, around 20 million young people across the country will become college freshmen. For most of these students, their (roughly) four-year journeys will be laser-focused on professional development and preparing for a career and financial success. But what about their spiritual and moral development? Are these primary or even secondary priorities of continuing one’s education? In partnership with the Association for Biblical Higher Education (ABHE), Barna asked Christian students about their openness to faith-based or religious learning opportunities.

First: Just what, exactly, do people think college is for? Americans overwhelmingly see higher education as a path to gainful employment (69%) and financial security (55%). This is a view shared across religious demographics: by Christians, by adherents to non-Christian faiths and by those who profess no faith at all. In some cases, Christians most fervent about their faith—including practicing Christians (75% prioritize preparing for a specific job or career) and evangelicals (67%)—are even more pragmatic and career-focused than non-Christians. Moral and spiritual development are seen as important but not the best reason to pursue a college education.

However, among those same groups of practicing Christians and evangelicals, there remains a significant level of interest in biblical or theological training outside of traditional undergraduate or graduate degree programs. Three in 10 practicing Christians (31%) and one-third of evangelicals (33%) express interest in “continued professional development that focuses on integrating faith and applying it to my career.” One in four evangelicals (26%) is interested in “single, one-off intensives, refreshers or workshops on a religious topic for personal enrichment,” and one in five (20%) says the same about “engagement in a religious education hub in my area where I can study theology for personal enrichment.”

31% of practicing Christians and 33% of evangelicals express interest in “continued professional development that focuses on integrating faith and applying it to my career.” Click To Tweet 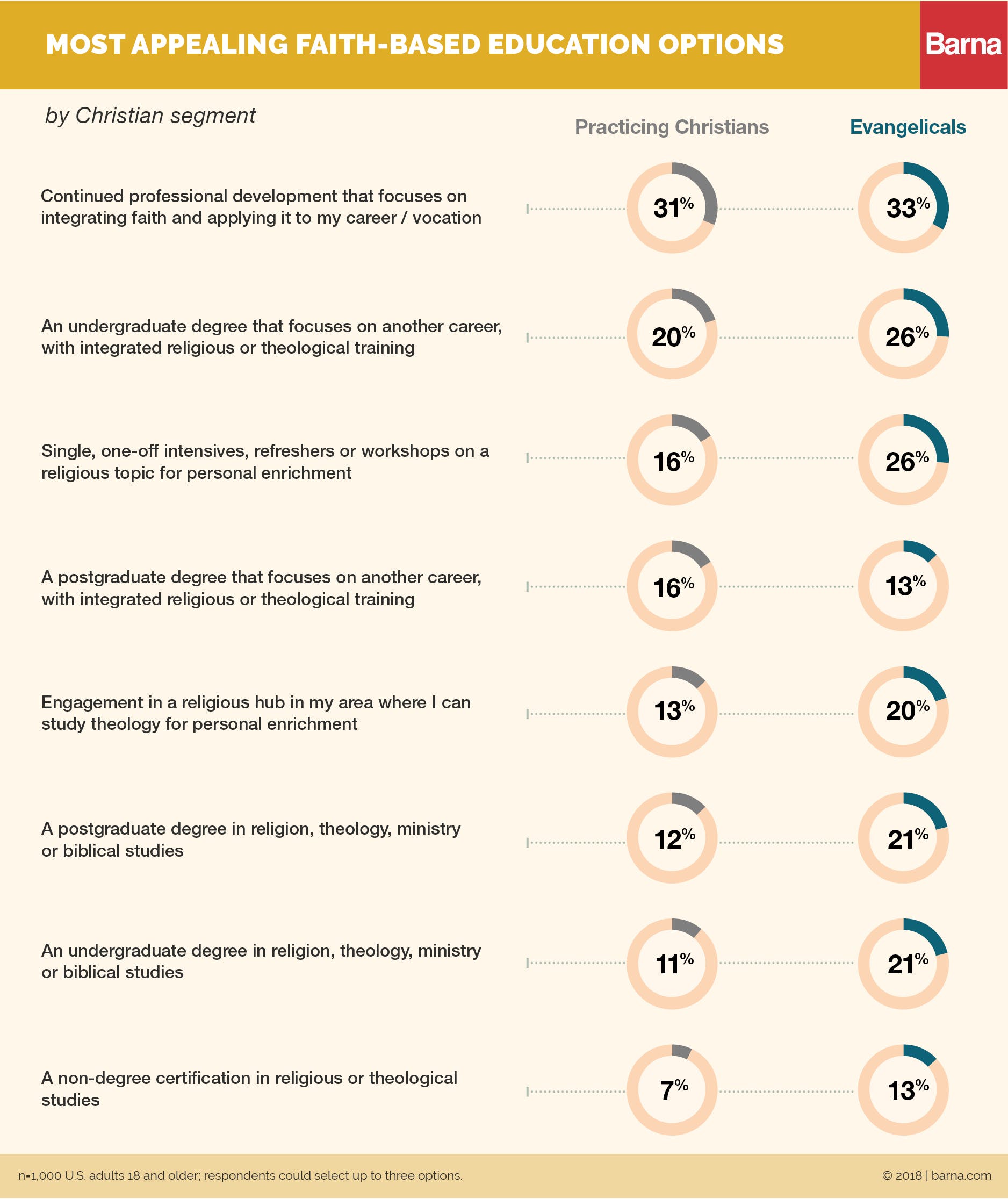 Other faith: those who associate with a faith other than Christianity. Among the most common of those faith groups included within that segment were Judaism, Islam, Buddhism and Hinduism.

No faith: those who describe themselves as atheist or agnostic, or who indicate that they do not believe in the existence of God or have no faith-related ties or interests.

Breaking the cycle of incivility in American public discourse will require a reset—and a radical reorientation toward virtues like forgiveness and kindness. Along these lines, Barna conducted a study on how U.S. Christians and pastors connect to biblical concepts of mercy, justice and truth. This new infographic explores whether these virtues impact their behavior.