The influence of Christianity in America is waning. Rates of church attendance have been declining for decades as more Americans shirk affiliation, put aside religious belief and grow skeptical of the church. As a result, America is more post-Christian than ever, and if the religious beliefs of the next generation are any indication, these shifts are just the beginning. As with previous years, Barna conducted an annual assessment of the American Church to measure religious affiliation, church attendance and faith practice. Based on a large pool of data collected over the course of a year, this “State of the Church” study provides insight into the overall health of Christianity in America.

Most Americans Identify as Christian
Three-quarters of Americans (74%) say they are a Christian, but only about one-third of Americans (32%) qualify as practicing Christians—those who regularly attend church and say their faith is very important in their lives. About four in 10 Americans (39%) classify as non-practicing Christians. Almost one-fifth (19%) claim no faith at all, and a smaller percentage (6%) identify with other faiths like Islam, Buddhism, Judaism or Hinduism. More than four in 10 (42%) qualify as post-Christian. 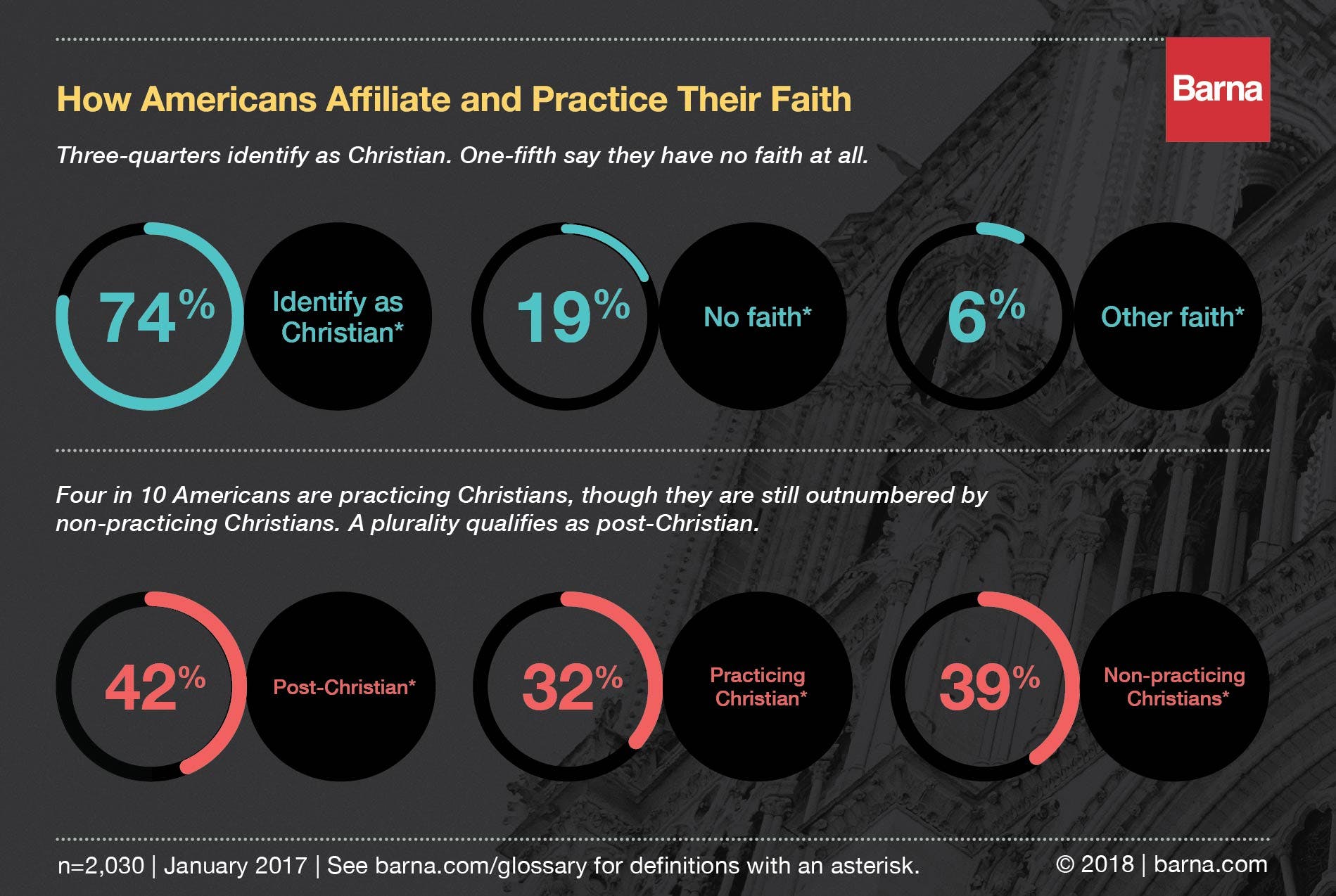 A Majority of Americans are Churched and Generous
Most adults in the U.S. have made their way to a religious service other than a wedding or funeral in the past six months. They are what Barna calls “churched” adults, and they constitute almost three-fifths of the population (57%). “Unchurched” adults—those who have not attended church in the past 6 months—make up a little over two-fifths of the population (43%). In addition to attending church, Americans also give generously to their home congregation. More than half of American adults (55%) donated money to a church in the past year, more than twice as many who donated money to a non-profit, other than a church (23%).

American Christians Hold a Variety of Theological Views
Christians in America come in all theological stripes and levels of engagement: one-third (33%) are born-again, while one-quarter (26%) are non-evangelical born-again (see below for definitions). Evangelical Christians make up only 8 percent of the population. The majority of Americans (62%) hold an orthodox view of God (defined as the belief that he is the “all-powerful, all-knowing, creator of the universe, and ruling the world today”). Almost half also agree strongly or somewhat that “good works result in going to heaven” (48%), and about three in 10 (29%) agree strongly that Christians have a responsibility to share their faith with others. 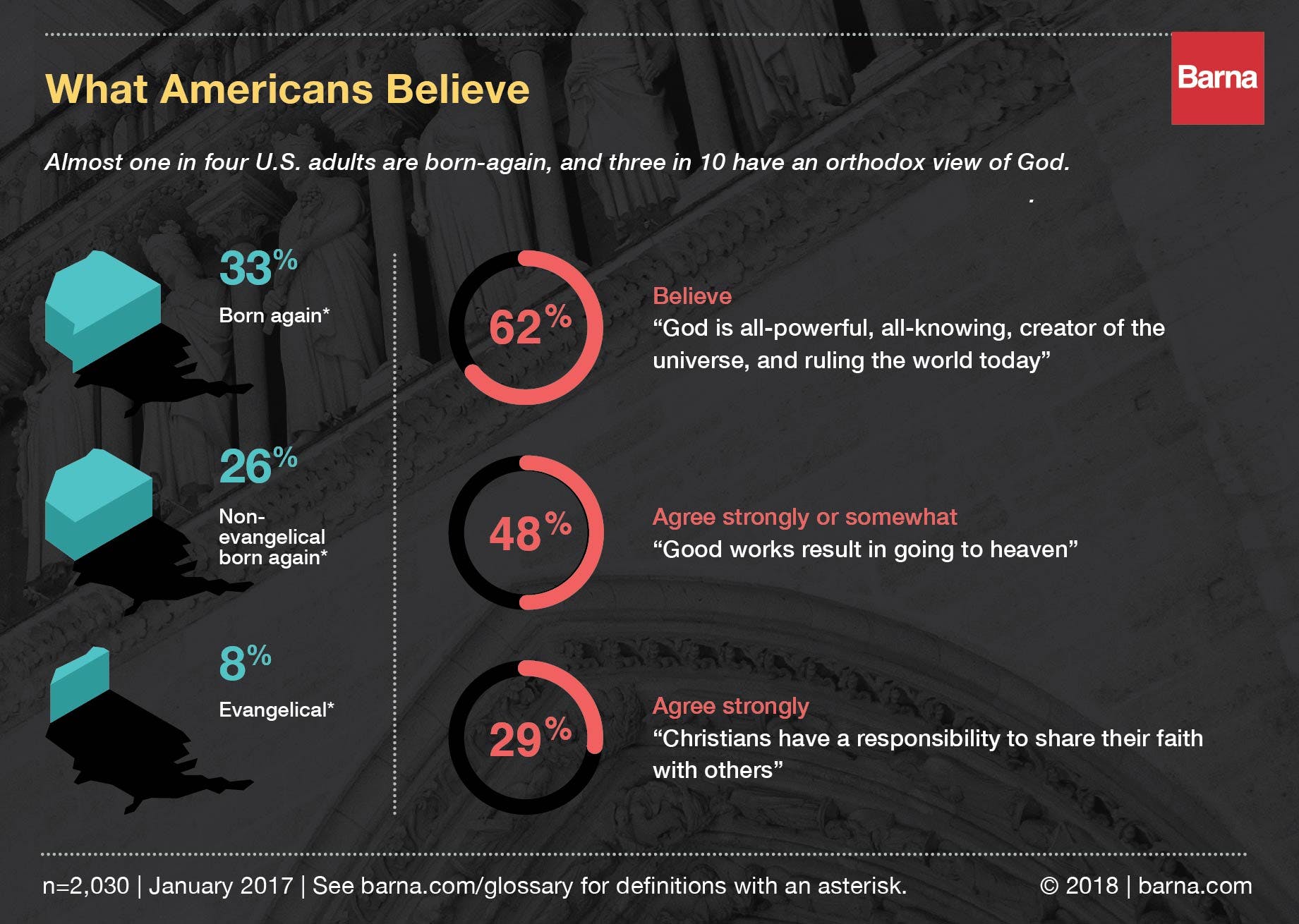 Prayer Is the Most Common Faith Practice
About three-quarters of Americans (74%) express their faith in prayer at least once a week. Following prayer, the next most common faith expression is reading the Bible, with almost four in 10 (38%) adults reporting doing so in the last seven days. Slightly fewer (36%) report going to a church service in the past week, and smaller percentages have either volunteered at a nonprofit (25%) or a church (21%), or attended a small group (17%) or adult Sunday school (16%) in the past week.

About the Research
The study on which these findings are based was conducted via online and telephone surveys conducted in January 2017. A total of 2,030 interviews were conducted among a random sample of U.S. adults, ages 18 years of age or older. The sample error is plus or minus 1.9 percentage point at 95-percent confidence level.

Born-again: Have made a personal commitment to Jesus Christ that is still important in their life today and believe that, when they die, they will go to heaven because they have confessed their sins and accepted Jesus Christ as their savior.

Non-evangelical born-again: meet the born again criteria but not all of the seven other criteria to be classified as an evangelical Christian.

Evangelical Christian: meet nine criteria, which include having made a personal commitment to Jesus Christ that is still important in their life today and believing that, when they die, they will go to heaven because they have confessed their sins and accepted Jesus Christ as their Savior. The seven other conditions include saying their faith is very important in their lives; believing they have a personal responsibility to share their religious beliefs about Christ with non-Christians; believing that Satan exists; believing that Jesus Christ lived a sinless life on earth; asserting that the Bible is accurate in all that it teaches; believing that eternal salvation is possible only through grace, not works; and describing God as the all-knowing, all-powerful, perfect deity who created the universe and still rules it today. Being classified as an evangelical is not dependent on church attendance or denominational affiliation, and respondents are not asked to describe themselves as “evangelical.”

No faith: choose “atheist,” “agnostic,” or “none” from a list of religious affiliations.

Other faith: choose a faith other than Christianity from a list of religious affiliations.

Churched: attended a service within the past six months.

Unchurched: have not attended church in the past 6 months.

Photo by Sarah Noltner on Unsplash

Matthew 28 is the most well-known biblical record of what is commonly referred to as “the Great Commission.” But a new Barna report reveals that a surprising proportion of churchgoing Christians lack familiarity with Jesus’ famous command to “go and make disciples of all nations.”