How Teens Spend Their After-School Hours

You are reading a free sample of The Tech-Wise Family

This article is part of Barna’s back-to-school series exploring brand new research on education, from parents’ expectations and college trends to students’ schedules and school violence. This article explores how young people spend their after-school hours, illustrating the impact of technology on their lives.

Smartphones are changing the way an entire generation spends their time. Teens (or iGen, as some have named them) have come of age in a world dominated by devices and unfettered access to the web—and it’s dramatically altering their behavior. According to a recent article in The Atlantic, author Jean Twenge shows that although teens are partying and drinking less, they are feeling more depressed and isolated than ever as they spend increasing amounts of time glued to their smartphones.

In his book, The Tech-Wise Family: Everyday Steps for Putting Technology in Its Proper Place, Andy Crouch explores the important role of the family in helping young people to navigate the demands of current technology. Recent research conducted by Barna for Andy’s book provides some insight into how young people spend their time when they aren’t at school (as reported by their parents), further illustrating the impact of technology on their lives.

Between the school dismissal bell and the call for dinner, how do kids fill their time? If you picture an idyllic afternoon of bike rides, playgrounds and ice cream trucks, think again. These days, it’s almost impossible to imagine an off-the-grid, device-free existence, and this is especially true of children who have come of age in a tech-saturated world. In fact, most of the after-school activities of children involve technology. A significant majority of children (64%) watch television or movies after school, regardless of their age group. More than four in 10 (42%) play video games, but this is much more common among children ages 9–12 (48%) and 13–17 (49%). More than one-quarter (27%) spend their free time on social media or texting with friends, though this is primarily an activity among the 13–17 age group (48%). Half as many 9–12 year olds (25%) do the same, as well as only 13 percent of those eight or younger. One in four (25%) spend time browsing online, another activity dominated by teens. 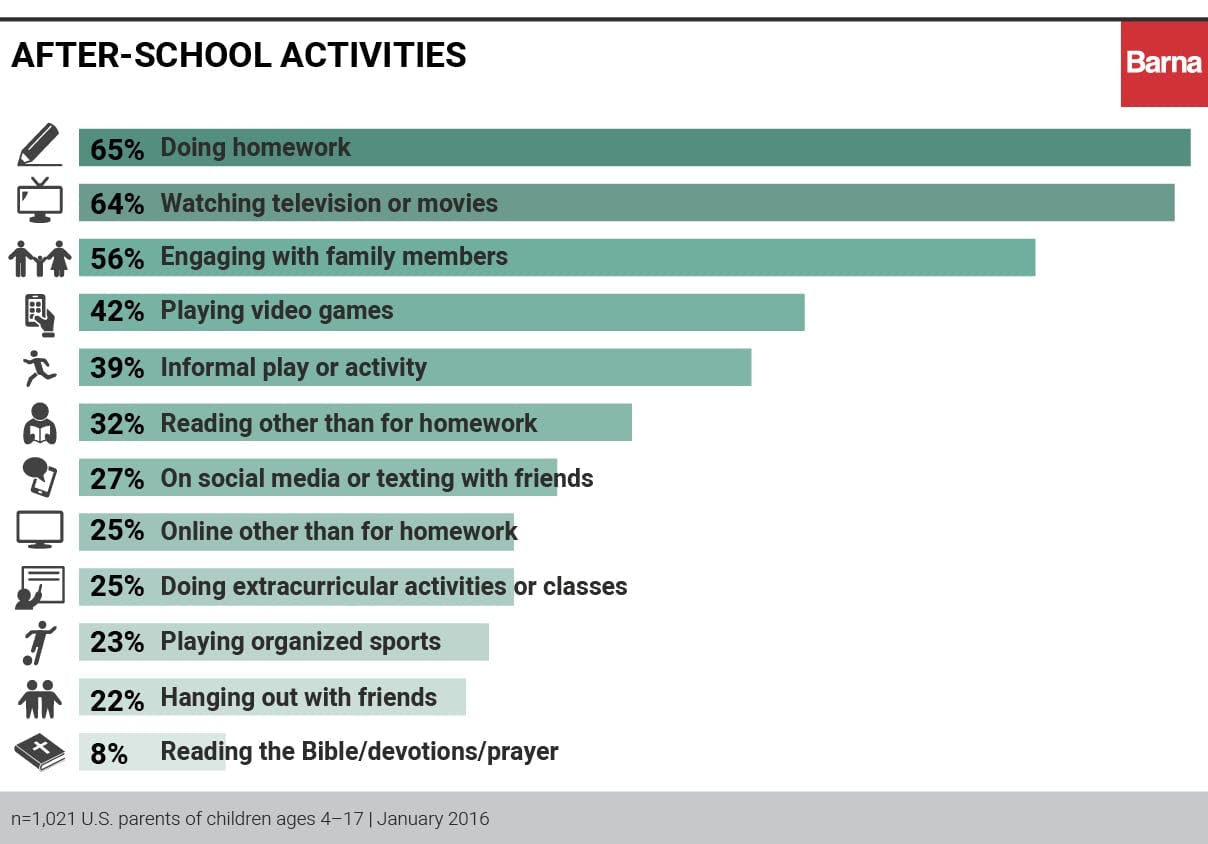 Screen time is not the only activity that consumes the afternoon and evening hours for children. In fact, the most common activity for any child is still doing homework (65%) (though certainly this now sometimes requires engagement with technology) and watching television or movies (64%). The third most common activity is interacting with family members, an after-school reality for over half (56%) of American children. But unsurprisingly, teenagers (54%) and 9–12 year olds (57%), having formed more non-familial relationships, are less likely to spend time with their family than the two younger age groups (60% of 5–8 year olds and 69% of those under the age of five). Around four in 10 kids (39%) engage in some kind of informal play or activity, an activity those under 5 do twice as much as teenagers (56% compared to 28%). Reading books beyond schoolwork is still fairly popular (32%)—but mostly among those without schoolwork (42% under age 5). Activities outside the house like extracurricular activities or classes (25%), playing organized sports (23%) or hanging out with friends (22%) are much less common. The least common of all after-school activities is reading the Bible/devotions/prayer (8%), but this is much more commonly reported among parents who identify as Christians (9%) than non-Christians (3%). Unsurprisingly, it’s also a popular after-school activity for families with practicing Christian parents (12%). 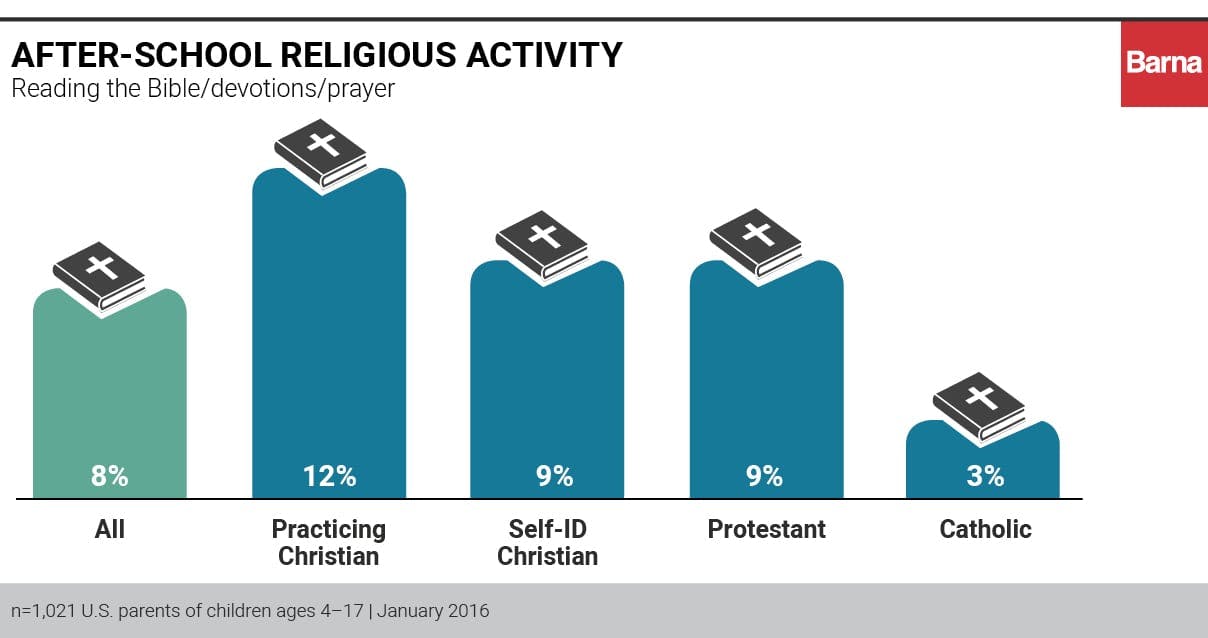 Reclaiming real life in a world of devices.

Read The Tech-Wise Family for more insight into “the proper place for technology” as well as a series of practical nudges, disciplines and choices that can help you and your family keep technology in its proper place.

What the Research Means
“The best and richest experiences of learning, it turns out, are embodied ones,” notes Andy Crouch in The Tech-Wise Family. “They require and build on physical experience and activity. This begins with the most basic things typical children learn in their first years of life. They learn, beautifully, awkwardly, and sometimes hilariously, all the aspects of living in a body.”

“As we go on to learn more complex and abstract things,” says Crouch, “the body continues to play an important role. At the most basic level, everything we learn is encoded in chemical and electrical connections between neurons in our brains. Cognitive scientists observe that the physical act of reading a book, with its bound pages, helps strengthen the learning of the concepts inside. Likewise, physically taking notes with a pen or pencil on paper—the act of forming physical letters by hand, with the twists and turns of the letter forms and the accumulating fatigue and need for rest—turns out to aid memorization and learning, even if we never consult the notes again.”

“The truth is that our children,” continues Crouch, “just like us, will spend far too much of their lives tethered to glowing rectangles. We owe them, at the very minimum, early years of real, embodied, difficult, rewarding learning, the kind that screens cannot provide. And that is why a family that cares about developing wisdom and courage will exert every effort to avoid the thin simplicity of screens in the first years of life.”

Photo by Aaron Burden on Unsplash

You are reading a free sample of The Tech-Wise Family

What Parents Look for in Christian Schools

What are the school-choice priorities for parents, and what role does faith play in those decisions? In partnership with the Association of Christian Schools International (ACSI), Barna asked parents of current and prospective Christian school students about their schooling decisions.