The feasting season is upon us, and this week, many will likely eat turkey with relatives, neighbors and close friends of varying generations, religious views and political affiliations—which can make for some interesting conversation. Getting together over the holidays can be almost notoriously fraught for many reasons (not to mention the presence of smartphones, which more than 4 in 10 parents tell Barna disrupt family meals). Over the years, Barna research has provided insights on some of the delicate or even difficult dynamics that might exist across generations or simply across the dinner table.

Attitudes About America Are Generally Mixed
In a divided national climate, few topics have the ability to raise the blood pressure in the room like patriotism, a concept at the heart of recent headlines on everything from immigration policies to the national anthem, as well as the origins of the Thanksgiving tradition itself. A Barna survey covering attitudes about the U.S. implies that American exceptionalism is widespread—albeit with a few caveats. More than four-fifths of the general population (81%) agree that, “generally speaking, the U.S. is a better country than most other countries.” Three-quarters of churchgoers (75%) say the same, which exceeds the two-thirds of non-Christian U.S. adults (67%) who feel their country is superior. The numbers are lower when it comes to churchgoers of an ethnic minority; this group is the least likely to agree (33% “strongly” + 33% “somewhat”). But these sentiments coexist with others that point toward embarrassment: Another four-fifths of U.S. adults (79%) believe there are some things about America today that make them feel ashamed.

Christians Who Embrace Faith Conversations Tackle Other Topics
Most U.S. adults, Christian or not, prefer that their partners in conversations on spiritual matters are close friends or family members. A majority of practicing Christians (61%), non-practicing Christians (55%) and non-Christians (55%) choose “a friend” as the person they most want to talk with about faith. Other, more distant relatives rank much lower on the list—so it’s possible religion might not come up at family gatherings. But other Christians may embrace it. Barna found that Eager Conversationalists (Christians who have had 10 more conversations about faith in the past year) seem to be more open and interested in turning ordinary encounters into spiritual conversations. They are also more likely to have engaged in conversations about other subjects that might commonly ruffle feathers, including health (80% vs. 71% of Reluctant Conversationalists), politics (77% vs. 68%), parenting (69% vs. 55%) and LGBTQ issues (55% vs. 41%). While these individuals might not shy away from spiritual and other topics, non-Christians are more cautious about broaching the subject of religion. Six out of 10 say a person must not share if their religious beliefs are “disrespectful or judgmental.” Practicing Christians see fewer barriers to spiritual conversations, but they align with non-Christians in showing concern about the motivation or mood of the person who is sharing; four in 10 say talking about faith in anger is unacceptable. 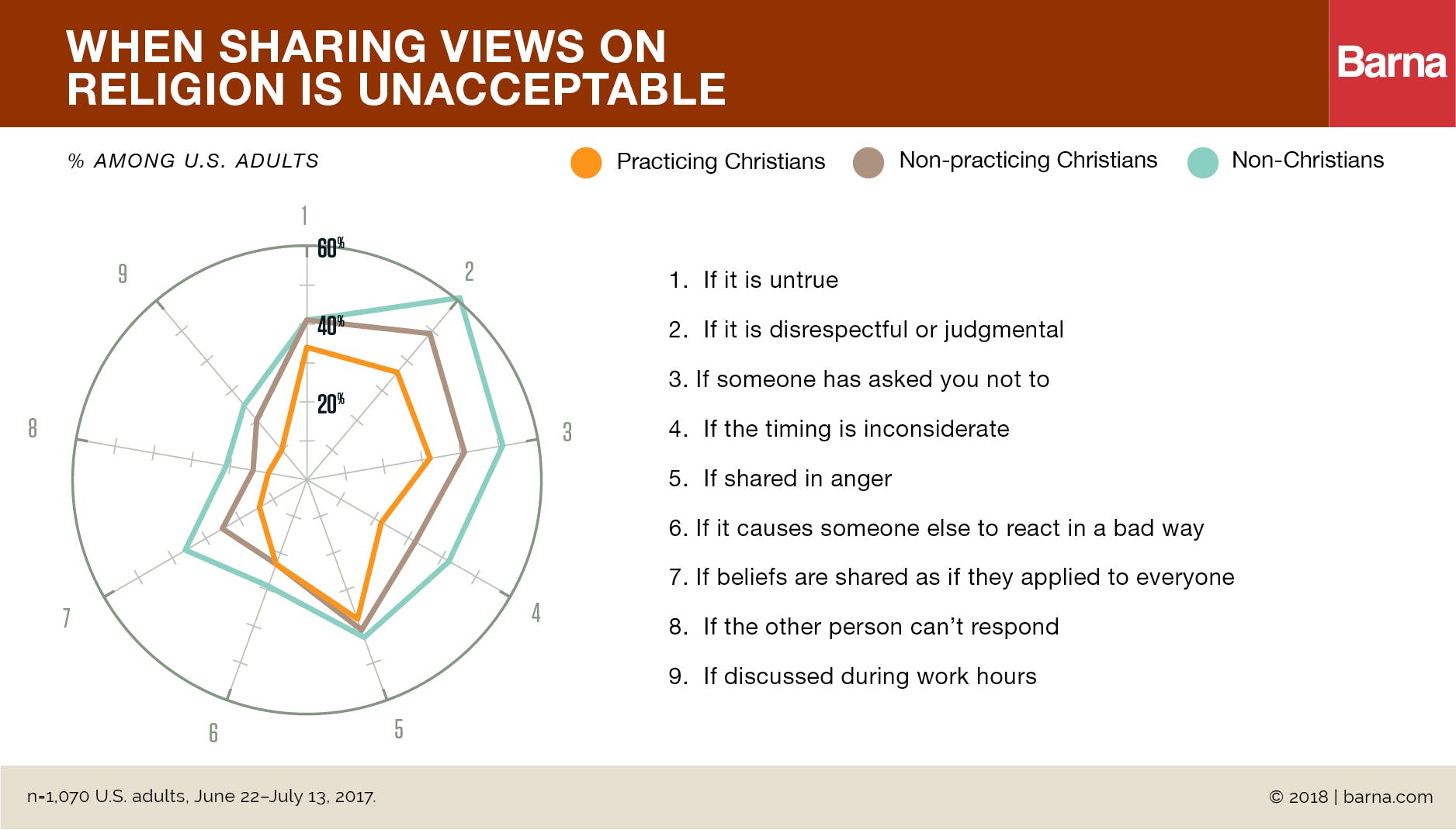 Some Subjects Are Tied Up with Personal Identity
Depending on your age or stage of life, different subjects may feel weighty because they are more closely tied to who you are as a person. For example, today’s teens—perhaps moving up from the “kids table” this year—follow the lead of Millennials in telling Barna that personal achievement, whether educational or professional, and hobbies and pastimes are central to their identity. Gender, sexuality and friendships are also topics more often at the core of how Gen Z sees themselves. All older adults, however, are most likely to define themselves by their family background, and Boomers especially identify with their religious beliefs. 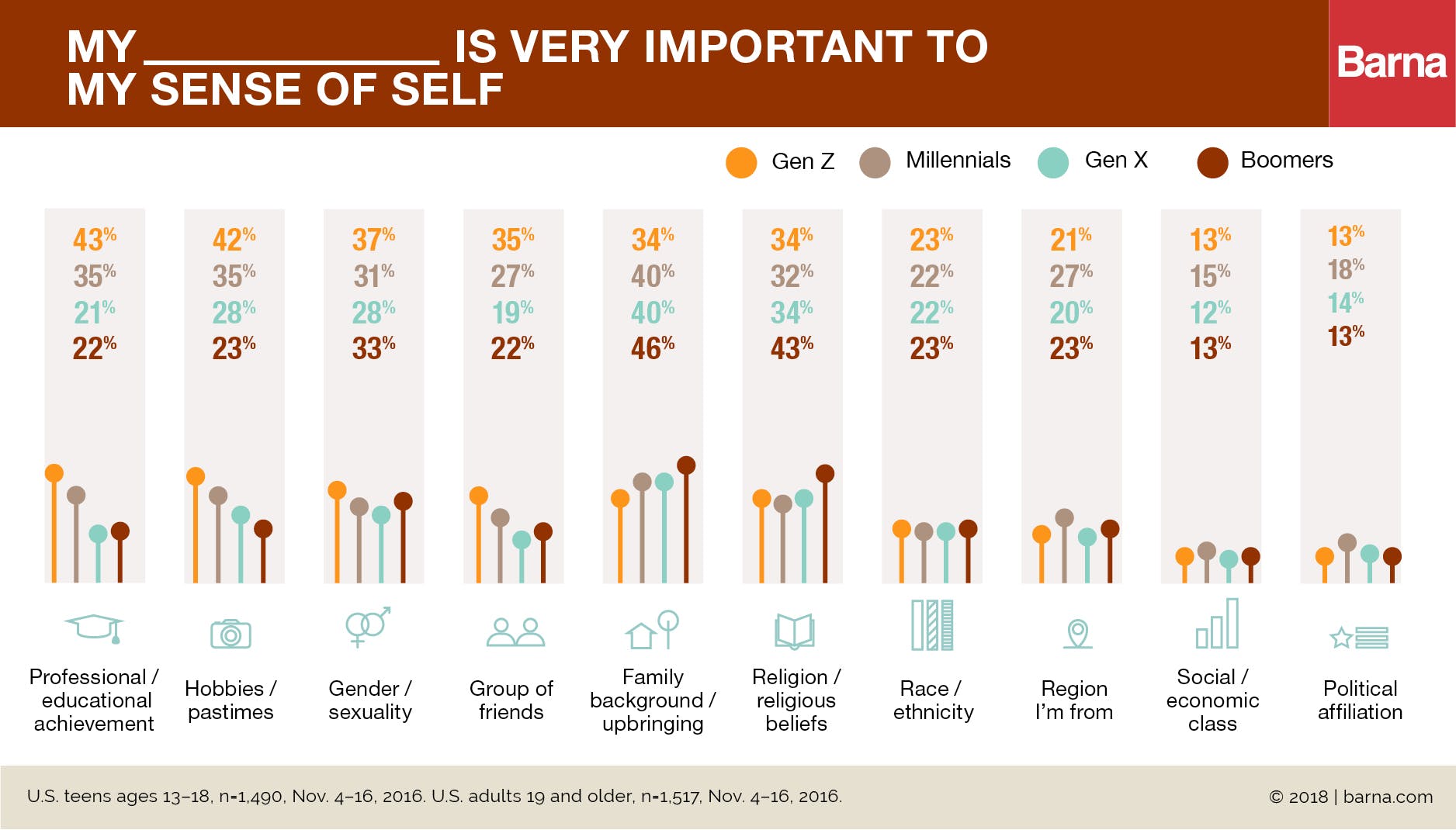 For the Most Part, Our Close Circles Don’t Invite Differences
The challenge of Thanksgiving dinner, or any group or family gathering, is often centered around the ability to deal with those who are different than you. Younger generations tend to be better at immersing themselves in diverse social environments than their elders. Teens (39%), along with Millennials (44%), are more likely than older adults (especially Boomers, 26%) to say they often interact with people “who do not share or do not understand important parts of my identity.” As a whole, people tend to be drawn to those who are more like them. Asked whether their current friends are mostly similar to themselves or mostly different from them in a number of areas, the majority always chooses mostly similar. This is true for religious beliefs (62% similar, 38% different), race or ethnicity (74% vs. 26%), income (56% vs. 44%), education level (63% vs. 37%), social status (70% vs. 30%), political views (62% vs. 38%) and life stage (69% vs. 31%). In particular, evangelicals are less likely than most to have friends who are different than them, especially when it comes to religious beliefs (91% mostly similar), ethnicity (88%), and political views (86%).

Whether holidays are shared with the friends you chose or the family you didn’t, it’s a time to break bread and fellowship with those who may be closest to us, unlike us or both, which, the research suggests, could be a challenge or a learning opportunity.

Photo by Hannah Busing on Unsplash

Experts Weigh in on the State of Sacred Dialogue

Barna conducted a major study to examine faith-sharing and evangelism in today’s climate. In addition, Barna sought out the insight of experts to shed light on the state of sacred dialogue today. In this article, four authors and ministers weigh in on some of the key obstacles and opportunities of modern spiritual conversations, from avoiding disagreement online to encouraging vulnerability in the home.