Top 10 Findings on Teens and the Bible

Teens across the country are gearing up to head back to school after a summer of sports camps, vacations and beach trips. Churches will soon be kicking off their youth programs, and as youth pastors and leaders prepare for teens to return, they will be thinking creatively about ways to get their young flock to dig more deeply into “the Word.”

The 2016 Teen State of the Bible research, along with The Bible in America study, commissioned by American Bible Society and conducted by Barna, examines teens’ perceptions of the Bible, the role they believe it should play in American public life and their level of personal engagement with it. The research tells us that teens have a deep respect for the Bible and care about its relevance to the world in which they inhabit. Here are the top ten findings from the study:

1. Reading the Bible in Public Is Seen as Encouraging
Most teens report positive feelings when they see someone else reading the Bible in a public place. When they encounter others reading the Bible, teens most commonly say they are happy to see other Christians around (37%), they are grateful to see that sacred books are still important to people (36%), and they feel encouraged (33%). At the other end of the spectrum, one in ten teens (10%) say it makes them think the person is old-fashioned.

2. A Majority of Teens Own a Bible and Read it Regularly
The positive reactions to seeing others reading the Bible in a public place means a fairly strong sense of familiarity among teens with not only the book itself, but also the practice of reading it. A solid majority—seven out of 10 teenagers (69%) —personally own a Bible. Forty-four percent of teens read the Bible at least three or four times a year, and one in four (25%) say they read the Bible at least once a week; this includes three percent who report daily Bible reading, 11 percent who report reading Scripture several times per week and 11 percent who read it once a week. One in 10 (9%) read the Bible once a month, and an additional 1 in 10 (10%) report reading the Bible three or four times a year. Just under two in five in ten teens (37%) say they never read the Bible. Not surprisingly, teens from non-Christian faith groups and those who say they are atheist or agnostic are most likely to say they never read the Bible (67%). 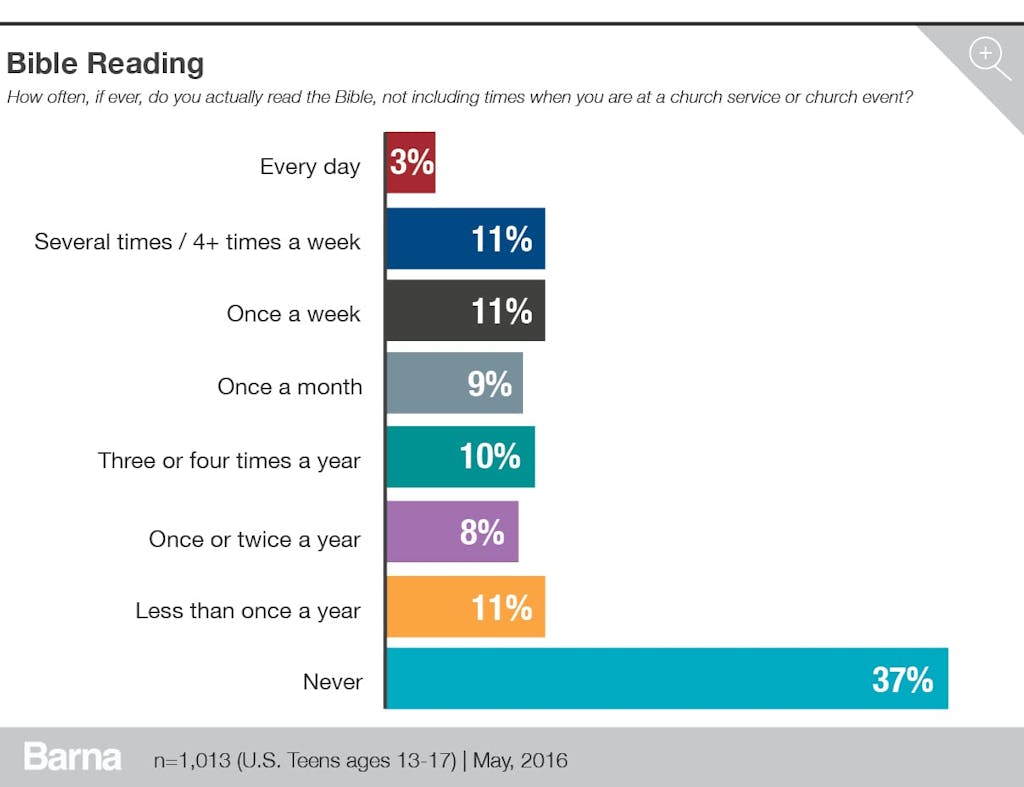 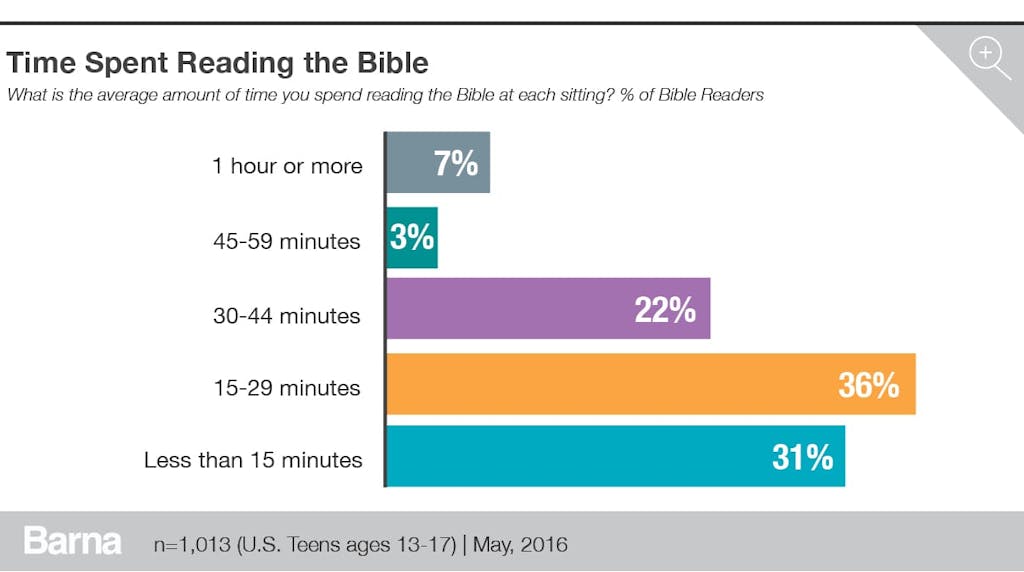 4. Growing Closer to God is the Key Motivator for Bible Reading
But why are teens spending so much time in the Bible? When presented with a list of five possible reasons for reading the Bible, half of Bible readers (54%) say they read Scripture because it brings them closer to God. Other reasons include obligation or knowing you are supposed to (12%), the need for comfort (8%), having a problem or needing direction (6%), and reading for school (10%). One in ten (11%) say they read for some other reason. 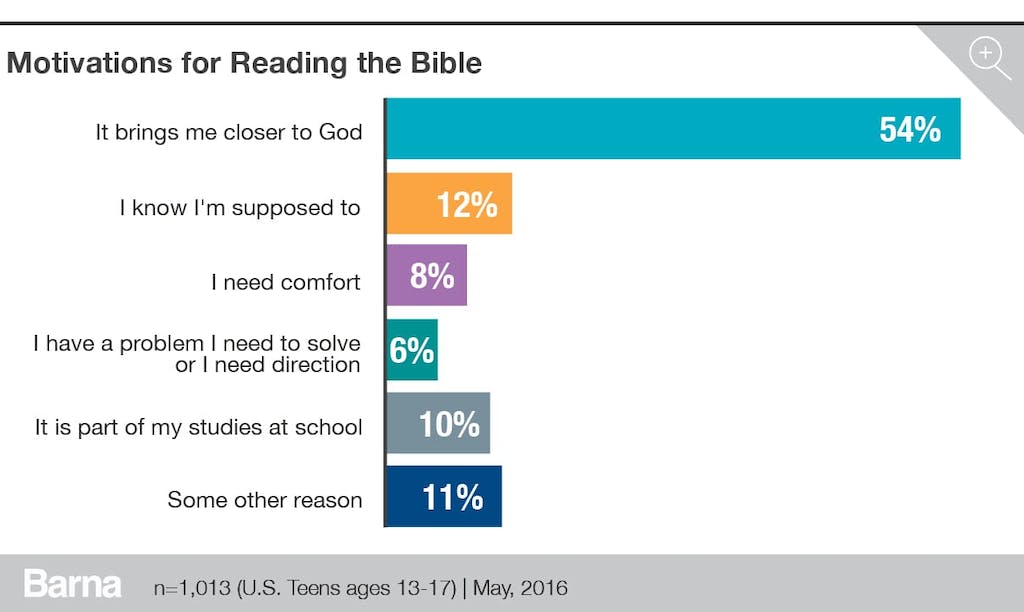 5. Teens Still Prefer to use a Hard Copy Bible in a Digital Age
When teens read the Bible, they are increasingly doing so digitally, but overall still prefer the old-fashioned hard copy version of the Bible. Among those considered Bible readers (read the Bible at least 3-4 times a year), the most common interactions with the Bible include hearing it read in a worship service or Mass (87%), reading on their own from a print version of the Bible (70%), or attending a small group Bible study (50%). When it comes to interaction with digital formats of the Bible, 46 percent of teens have used their cell phone or smartphone to search for Bible verses or Bible content, and about one third say they have downloaded or used a Bible app on a smartphone (33%) or used the Internet to read Bible content (35%). With the explosive growth of digital technology and mobile devices, usage of all of these digital formats has increased since 2015, with the most drastic being an increase in 13 percentage points in those that engaged with Scripture via their smartphone or cell phone (33% to 46%). One out of six teens (16%) report listening to an audio version of the Bible, and the same proportion (16%) listened to a podcast of Bible teaching. 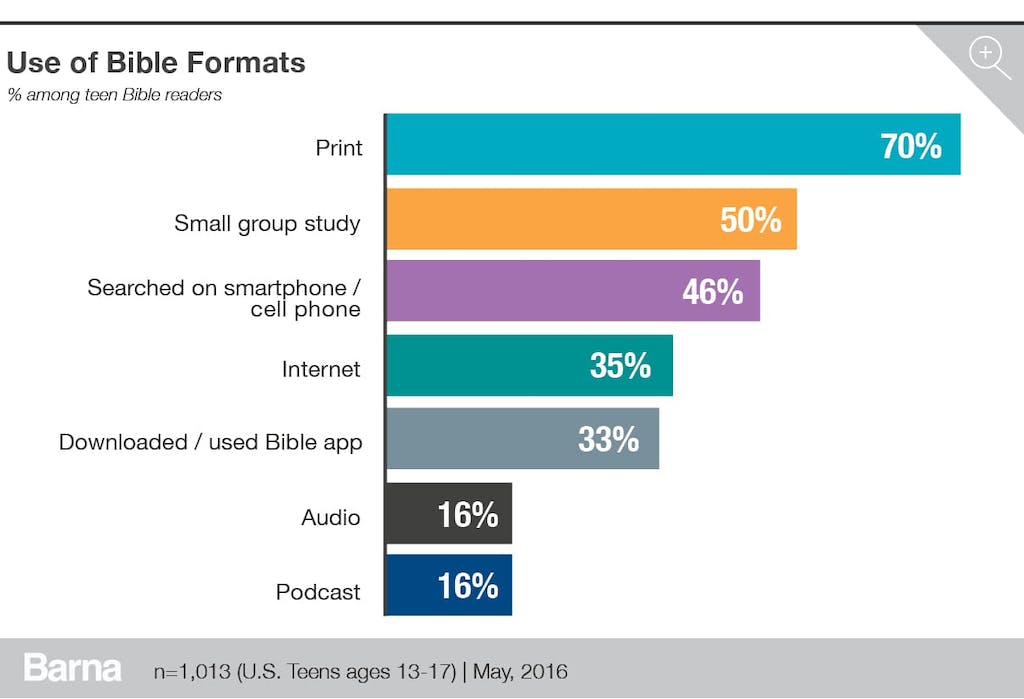 6. The Bible Is Considered Sacred Literature
The Latin phrase biblia sacra, meaning “holy books,” first appeared as a description for the Bible around the Middle Ages, and its sentiment seems to have stuck around. The vast majority of teens (86%) choose the Bible as the book that comes to mind when they think of sacred literature or holy books. However, this is a statistically significant drop in three percentage points from 89 percent in 2015. While Christian teens are more likely than average to mention the Bible, even the majority of teens (61%) who do not align themselves with the Christian faith mention the Bible more often than other sacred literature. Other books considered sacred or holy are chosen far less often. About one in six teens consider the Koran (17%) and the Torah (16%) to be sacred literature or holy books. About one in eight teens (12%) say they do not consider any books sacred or holy—another statistically significant increase of four percentage points since 2015. 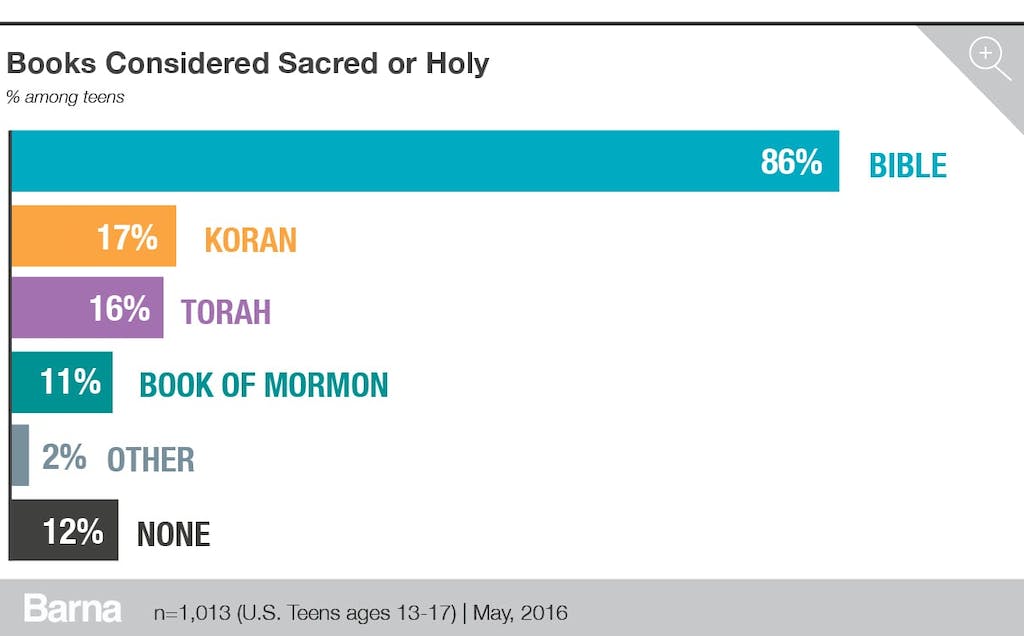 7. The Bible Is a Source of Hope and Guidance
To be considered “sacred,” a text must be known to have spiritual power or religious significance, so it comes as no surprise that about half of teens (47%) strongly agree that the Bible is a source of hope. Practicing Protestants (96%) and practicing Catholics (67%) are in stronger agreement with this sentiment than non-practicing Christians (44%) and teens from other faith and no faith groups (18%). About a third of teens (35%) believe the Bible contains everything a person needs to know to live a meaningful life. This is a statistically significant drop in six percentage points since 2015. Teens were also asked whether they agree that the Bible, the Koran and the Book of Mormon are all different expressions of the same spiritual truths. Roughly one in 10 (11%) teens express strong agreement with this statement.

8. The Bible Is Considered the Literal or Inspired Word of God
How precisely sacred do teens believe the bible to be, and how do they believe it should be read and interpreted? Presented with five different descriptions of the Bible, more teens believe it to be inspired (with some symbolism) than literal. A plurality (30%) says the Bible is the inspired word of God with no errors, though some verses are meant to be symbolic. The next most-common belief is that the Bible is the actual word of God and should be taken literally, word for word (20%). One in six (16%) say the Bible is the inspired word of God with some factual or historical errors. One in five (19%) say it is just another book of teachings written by men that contains stories and advice; this is a statistically significant increase in five percentage points since 2015. The final option—the Bible is not inspired and tells how writers understood the ways and principles of God—is preferred by 7 percent of teens. About one in 10 (9%) say none of the options represent their belief about the Bible. 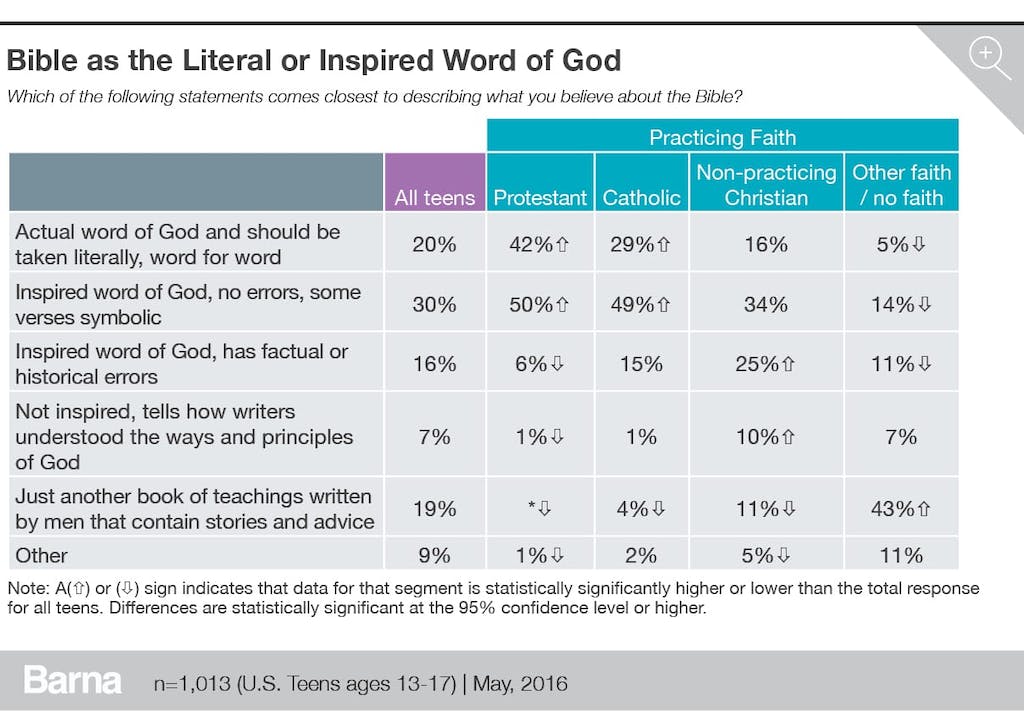 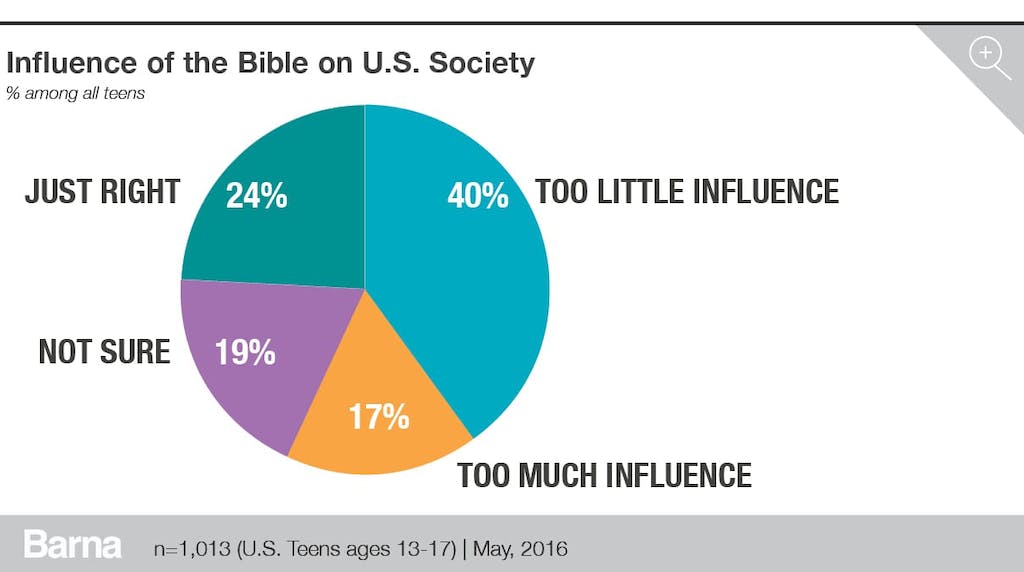 10. The Bible Influences Political Decisions
A primary way for teens to bring scripture to bear on their daily lives is to see and understand the political world through its lens. Two-thirds of teens say they are following the current presidential campaign (15% very closely, 50% somewhat closely). Just one in three teens (33%) say the Bible influences their opinion of the candidates running for president. This may seem low, but teens were also asked whether they thought politics would be better if politicians read the Bible on a regular basis. Overall, a much higher percentage—a little over half—of teens (53%) think politics would be positively impacted by increased Bible-reading. However, it’s important to note that this is a statistically significant drop in nine percentage points since 2015 (62%).

What the Research Means
“In an increasingly secular culture,” says David Kinnaman, president of Barna Group and the director of the study, “the Bible remains a highly regarded and well-read text among the vast majority of American teens—most of whom believe it to be sacred. And the fact that so many still consider it a source of hope and guidance is reason for great optimism for church leaders and parents alike.”

“The explosive growth of digital technology and mobile devices presents a unique opportunity for Bible engagement among the generation quickest to adopt new technology,” continues Kinnaman. “Though a majority of teens still read the Bible in traditional hardcopy form, digital Bible formats are becoming increasingly popular. As youth pastors and leaders across the country continue to invest in the spiritual formation of teens through encouraging Bible reading and engagement, embracing these new technologies and encouraging their use will be central to that goal.

“The research also tells us that teens care deeply about the relevance of the Bible to the world in which they inhabit,” notes Kinnaman. “In a tumultuous political season, many teens believe the Bible can provide moral guidance. The more youth pastors and leaders can make the Bible and its teachings relevant to challenges of today, the more they will simultaneously encourage engagement.”

About the Research
This study included 1,013 surveys conducted among a representative, random sample of teens ages 13 to 17 within all 50 states. The survey was conducted May 6, 2016 through May 23, 2016. The sampling error for a sample of this size is plus or minus 3 percentage points at the 95-percent confidence level.

About American Bible Society
Since 1816, American Bible Society has worked to make the Bible available to every person in a language and format each can understand and afford, so all people may experience its life-changing message. One of the nation’s first and most enduring ministries, today’s American Bible Society provides resources across a variety of platforms enabling first-time readers and seasoned theologians alike to engage with the best-selling book of all time. For more information, visit American.Bible.

The growth of digital technology and mobile devices has fundamentally altered the way we communicate and engage with each other. Social media sites mediate our online presence and set new rules for digital interactions. But the question remains: has social media made our lives better or worse? Barna conducted a study among women to examine the habits and impact of their social media use.