The Relationship Between Volunteering and Giving

One of the challenges in leading a church is talking about giving; it’s a pastor’s task to both encourage the congregation to take up the biblical mandate of generosity, while also meeting the very real practical needs of that ministry. So how do pastors talk about and inspire generosity with sincerity and effectiveness—especially when, as Barna’s data shows, pastors and parishioners don’t always have the same ideas about what it should look like or where it starts? For example, according to The Generosity Gap, a recent Barna report produced in partnership with Thrivent Financial, volunteering is considered one of the most generous acts possible. But how does it compare to congregations’ other forms of generosity, like financial giving, for instance? Is there any correlation between the two?

Volunteering and Service Among the Most Generous Acts
In what ways are Christians most often generous to others? Barna asked participants in the quantitative study to select, from a list of possibilities, the three acts they consider to be most generous. Almost six in 10 (57%) believe taking care of a sick person is one of the most generous things one can do. A majority in each generation agrees. But second on the list among all Christians is volunteering for an organization (52%). This is considered highly generous by a large share of each age cohort—yet a significantly smaller percentage views volunteering for a person (for example, driving them to the airport or babysitting for free) to be exceptionally generous. 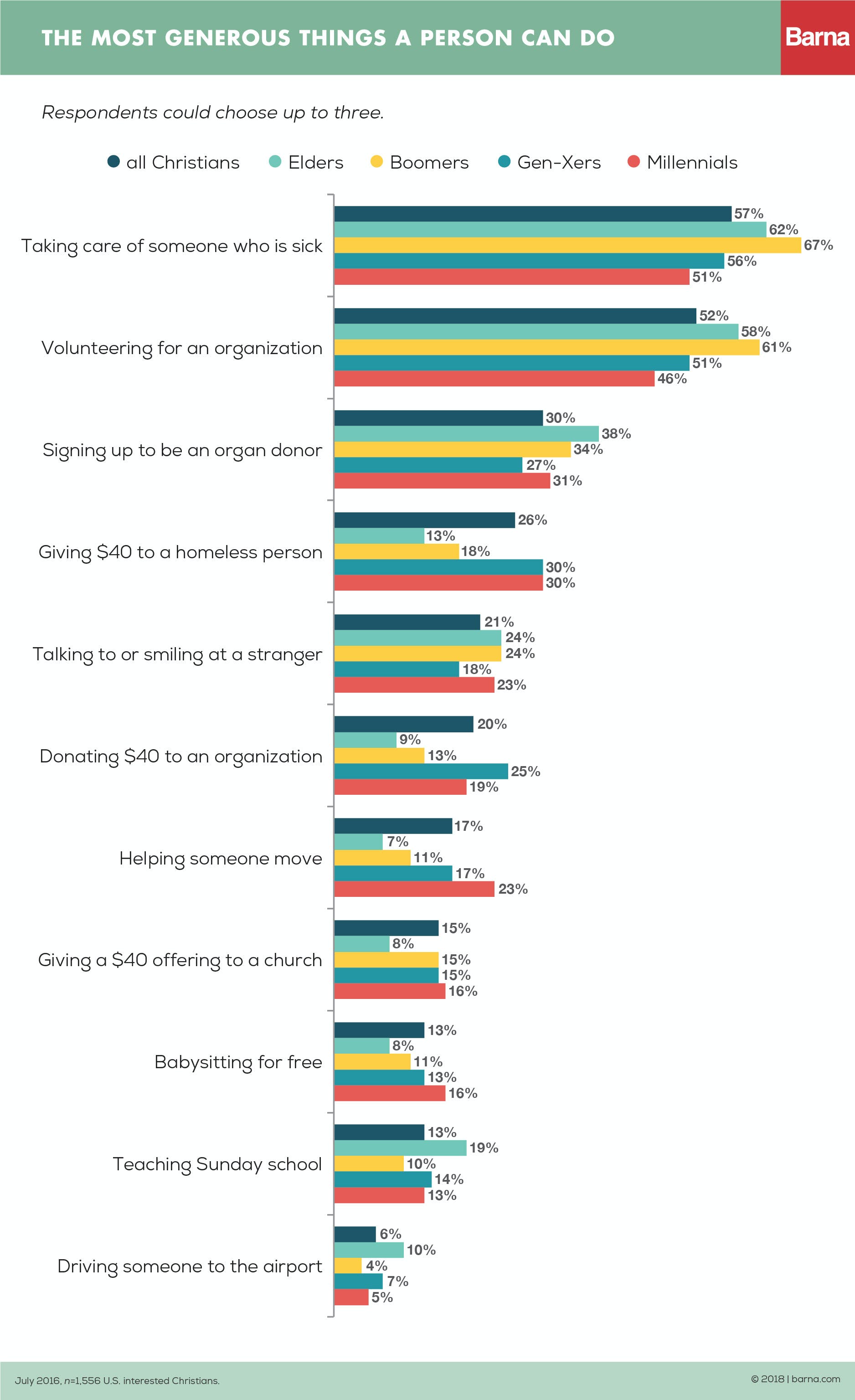 Analysis suggests this disparity may have something to do with people’s perceptions of personal cost—that actions requiring more effort tend to be perceived as more generous. For example, volunteering for an organization often requires specialized training, adherence to a set of rules and expectations and a specific time commitment, compared to helping a friend or family member. A similar finding supports this insight: Many people consider giving $40 to a homeless person more generous than giving $40 to an organization or church. The dollar amount is the same in each case, but the cost of a personal encounter with a homeless teen or adult tends to be higher than tucking a check in the offering basket when it passes by.

Barna found that engaging in the act of volunteering correlates with a perception that doing so is generous; that is, if a person has volunteered their time on behalf of an organization within the past six months, he or she is more likely to associate volunteering with generosity. And the reverse is also true: People who have not volunteered are less likely than those who have to think of volunteering as particularly generous. 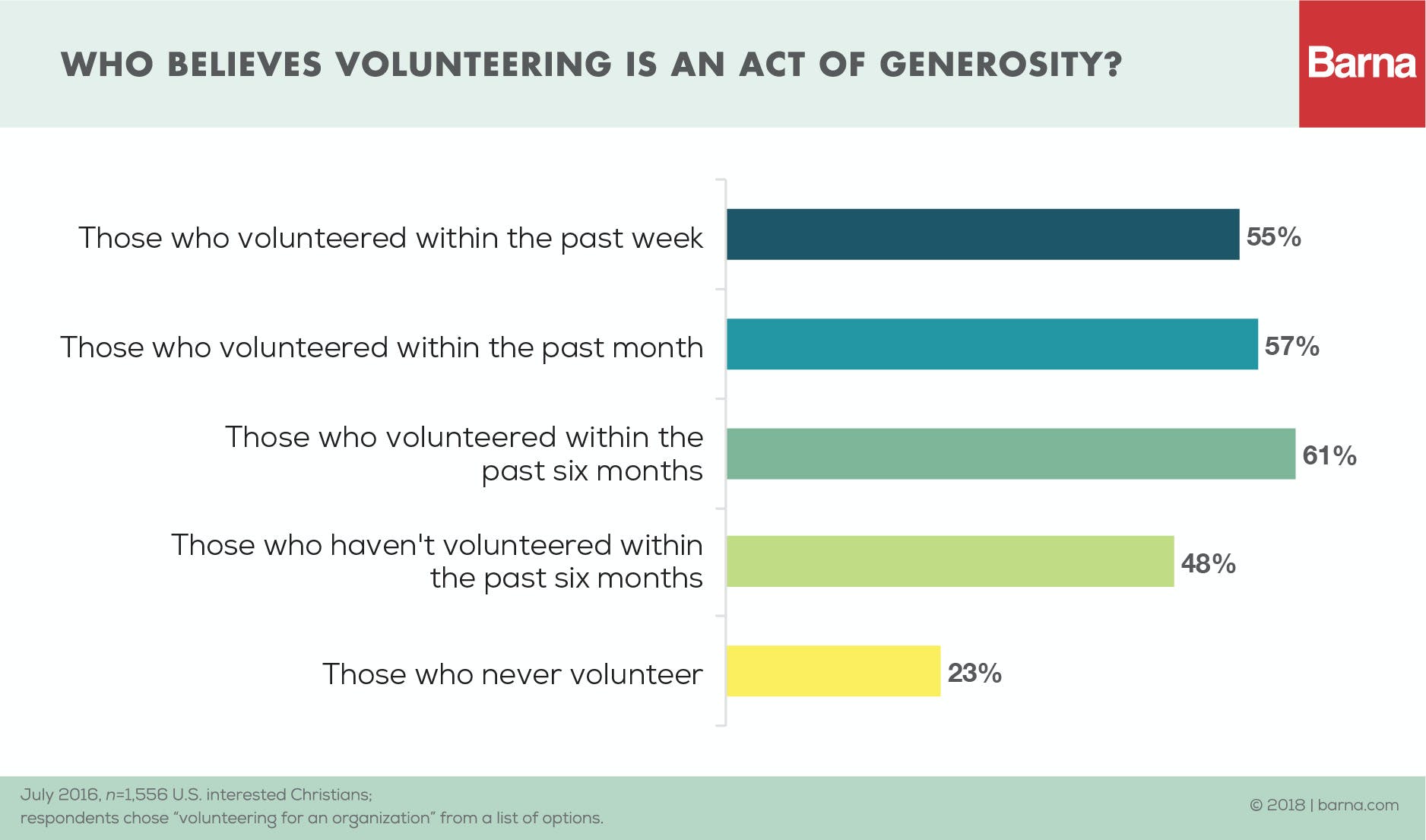 The spectrum of actions people consider to be generous is wide—especially when they are thinking about their own actions. Some participants mentioned taking care of people inside or outside of their household, “picking up slack at work,” singing at funerals, doing housework for extended family members and assisting with meal preparation.

Volunteering Is Not Equated with Giving—But Often Accompanies It
Christians don’t just have a high opinion of volunteering as a form of generosity—they also see it as interchangeable with financial offerings. Only one in five Christians disagrees (10% strongly, 11% somewhat) that it would be acceptable to give of one’s time instead of one’s money to their church. Pastors, for the most part, don’t see these two activities in the same light. More than eight out of 10 disagree strongly (67%) or somewhat (18%) that “it is okay for a member who volunteers extensively not to give financially.”

Pastors disagree that volunteering and financial giving are interchangeable. But just one in five Christians is on the same page with pastors. Click To Tweet

Whether or not pastors think the two are interchangeable, they would do well to focus on both forms of generosity, as Barna’s data highlights a strong link between serving and financial giving. As the chart shows, Christians who give most are also most likely to say they have volunteered within the past week or month. The pattern also holds true for those who consider generosity extremely important. In other words, Christians prone to participate in one type of giving aren’t looking to get a pass on the other. Whether giving of money or of time, generous Christians are simply generous. 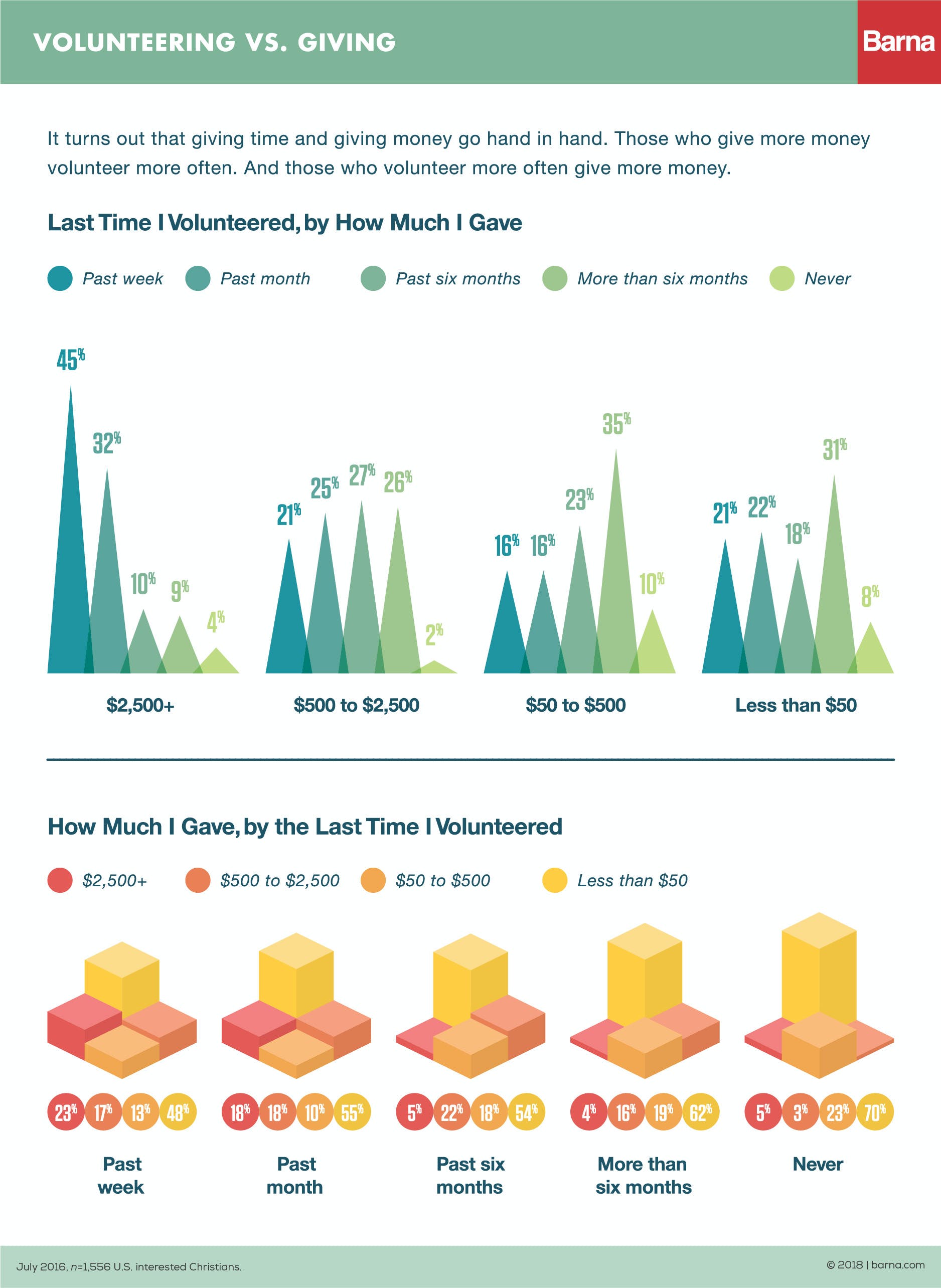 Christians who give most are also most likely to say they have volunteered within the past week or month. Click To Tweet

Interested Christians are those who indicate that faith is or might be important to them, and either currently attend or have been involved in a church at some point in their lives.

Why People Are Reluctant to Discuss Faith