1 in 4 Americans Cast Ballots Outside Party Lines in Midterms

The midterms last month shifted the House of Representatives in favor of the Democrats, while Republicans maintained a majority in the Senate. Leading up to and following the election, many wondered: Just how entrenched are American voters? Have any actually shifted their political allegiance since Trump was elected? New research from Barna suggests that only a minority of Americans adults have, at some point, changed their minds about their fundamental political convictions. However, among people who report having switched political allegiances over time, many of them say they’ve done so recently, implying a level of political malleability among American adults in this fraught climate.

Respondents report voting outside their registered party more often for candidates at a national level (42%), than at the state (25%) or local (31%) level.

Most of those who say they voted for a candidate not affiliated with their registered party weren’t just making a single exception: Two-thirds (66%) report voting for either two (28%), three or more (38%) candidates outside their party. For the most part, Republicans and Democrats are equally as likely to report voting for multiple candidates not affiliated with their own party. The standout here is Independents, whose non-partisan voting approach makes them twice as likely to vote for multiple major-party candidates. 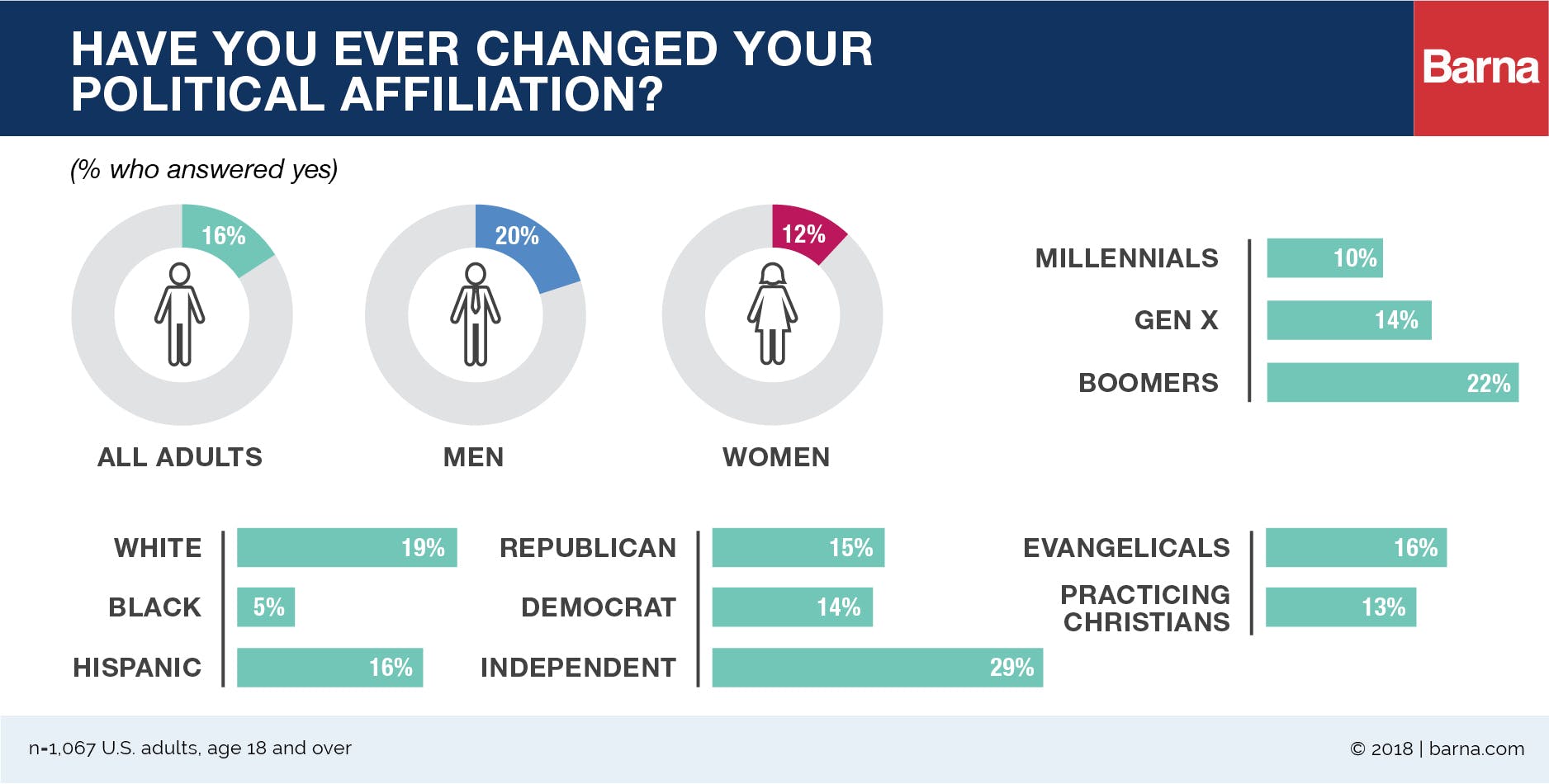 One-Quarter of Americans Have Switched Political Allegiance Since Trump Was Elected
Most of the shifts in party affiliation reported by U.S. adults occurred before the November 2016 election (71%). These occurred either more than a decade ago (26%), within the past decade (23%) or within the past 5 years (22%). But at least one-quarter of American adults (26%) say they’ve switched political allegiance since Trump was elected to office: more than 1 in 10 (11%)report having done so in the past year and 15 percent within the last two years. Trump is often hailed as a polarizing figure, which may be contributing to these recent shifts.

Americans Switch Political Sides out of Frustration or Shifts in Personal Beliefs
Why do American adults change their political party affiliation? The main reason cited is frustration with their previous political party (39%)—a sentiment shared equally by Republican, Democrat and Independent alike—or seeing their own personal beliefs change to the point that they no longer align with their previous party (38%). Less commonly, people change affiliation solely because they heard positive things about another political party (10%).

What the Research Means
“As we’ve seen in past Barna research, politics is a primary influence on personal identity, one that has been ingrained from a young age and reinforced through one’s social world. Much like religion,” says Roxanne Stone, Barna’s editor in chief and lead designer for this study. “Perhaps this is why we’ve outlawed both at the dinner table. Barna has spent considerable time researching the likelihood of changing one’s religion over time. Hint: very few people do. Religion—like political affiliation—is often cemented into us at a young age, influenced by our family and the worldview in which we’ve grown up. However, it’s worth looking at those who do change affiliation. Like those who change faiths, it seems the move is not from one institution to another, but from one institution to none. The growing ranks of Independent voters calls to mind the growing number of the religiously unaffiliated—or “nones” as they are often called. This shift is generally characterized by a disenchantment with an institution and a feeling of distrust toward any similar institution. We can see in this research that most people who shift political allegiance generally do so out of frustration with their former party. Very few people are wooed to the other side of the aisle. The nature of our current political climate—that of extremes on both the right and the left—may be leading more moderate voters to feel disenfranchised from either party, to feel there is ‘no place for them.’”

This article has been updated and edited for clarity.

About the Research
Interviews with U.S. adults included 1,067 web-based surveys conducted among a representative sample of adults over the age of 18 in each of the 50 United States. The survey was conducted between November 12-19, 2018. The sampling error for this study is plus or minus 3 percentage points, at the 95% confidence level. Minimal statistical weighting was used to calibrate the sample to known population percentages in relation to demographic variables.

Photo by NeONBRAND on Unsplash

Volunteerism in America: The Top 10 Cities

Over the years, Barna has been tracking the religious views, attitudes and lifestyles among American adults and publishing this data in our Cities reports. In this infographic, we list the top 10 American cities where respondents are most likely to volunteer for a non-profit organization on a weekly basis.