This week marks the one-year anniversary of President Donald Trump’s inauguration. In what has been an unprecedented year in American politics, the new Commander in Chief has dominated the news headlines and disrupted not only Washington but his own party. Just about every proposal, tweet and press conference has courted controversy and exposed deep political divides. Barna polled American public opinion on some of the key trends and policy issues in the early days of the Trump administration, which is explored in detail in the 2018 edition of Barna Trends. Here’s a recap of some of the bigger political moments since January 20, 2017 and how U.S. adults felt about them.

The Crowd-Size Controversy
One of the first acts of Trump’s then-Press Secretary Sean Spicer was to defend the size of the inauguration crowd gathered on the National Mall in D.C. on January 21. “This was the largest audience to ever witness an inauguration, period, both in person and around the globe,” said Spicer at the first press conference held by the new administration. But despite the great focus on attendance at Trump’s inauguration, campaign rallies or at the marches opposing him, Barna found few Americans say they have actually participated in demonstrations concerning Trump. Overall, as of mid-2017, just 7 percent had protested him, and 6 percent had rallied for him. Even among those who voted for Trump, just 15 percent attended his rallies. Those who do take such actions are typically young: A higher than average percentage of Millennials have rallied for (11%) or against (11%) Trump. Looking at party affiliation, and as with other expressions of approval or disapproval, Republicans are as likely to show up for Trump rallies as Democrats are to show up for Trump protests (10% each).

3 in 10 (31%) say the problem of fake news lies in reader error, not factual mistakes in reporting. Click To Tweet

Behind the “Fake News” Phenomenon
One of Trump’s favorite criticisms of the media has become a commonplace phrase this year: “fake news.” Since his election, accusing reports of being fake news has become a political weapon wielded by all sides. This indiscriminate application has made the meaning of fake news difficult to discern, promoting a sense of mistrust among politicians, pundits and the public alike. But Barna’s research suggests the divisive nature of fake news may have more to do with murky definitions than media’s clear deceptions. Three in 10 (31%) say the problem of fake news lies in reader error—“misinterpretation or exaggeration of actual news on social media”—not factual mistakes in reporting itself. From there, the blame shifts left; one-quarter (24%) says the source is mainstream liberal media, while just 13 percent point the finger at mainstream conservative outlets. Nearly one-fifth (18%) “don’t know much” about fake news, while 9 percent fault bloggers and independent journalists. Evangelicals (51%) align with Republicans (46%) in their assumption that liberal journalism is the trouble. 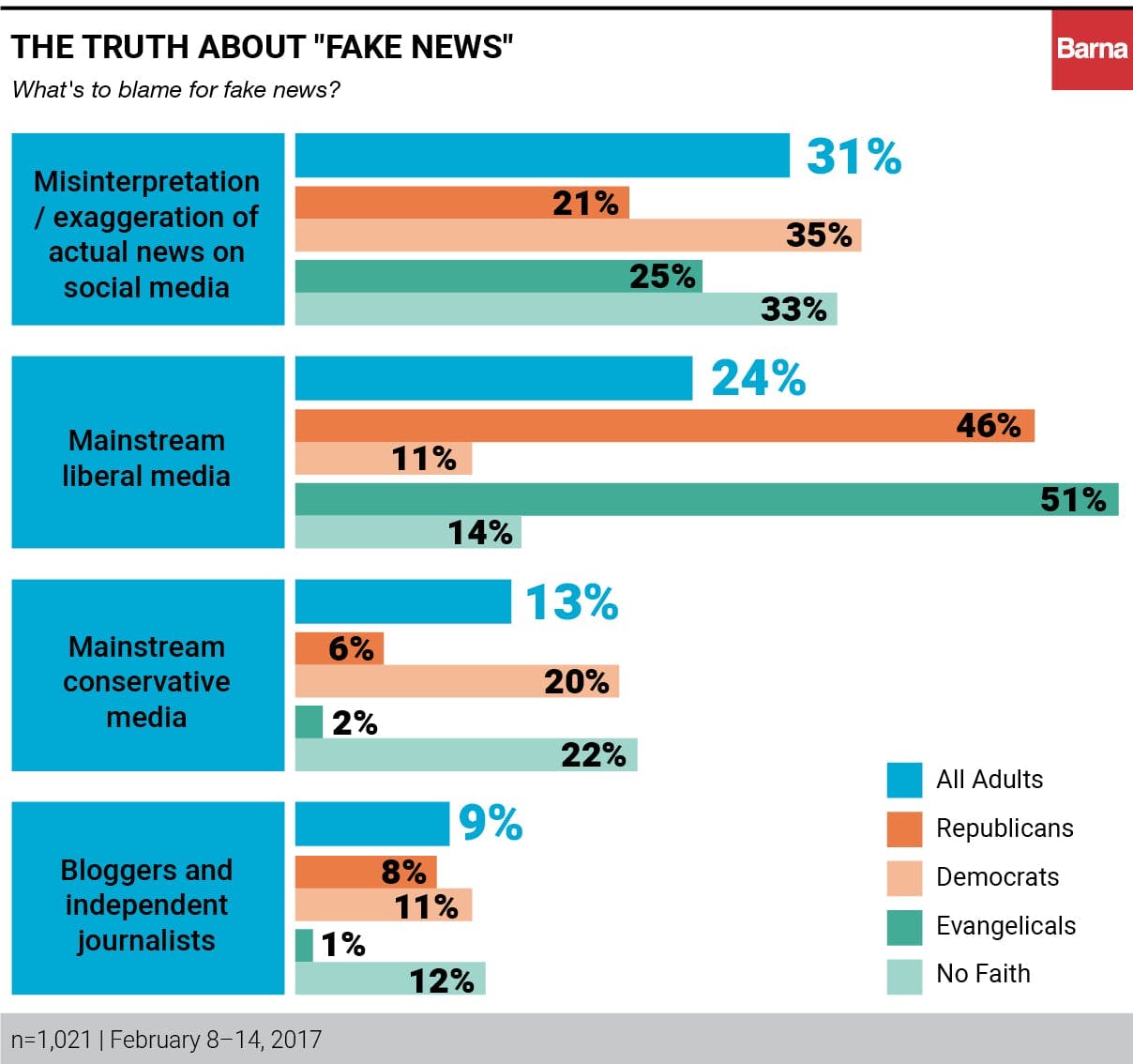 A Lack of Support for Trump’s Travel Ban
2017 began with Trump’s initial executive order to temporarily ban individuals from certain Muslim-majority nations from entering the U.S, a proposal that has since seen multiple revisions and legal challenges. This was one of his least popular moves, with half of American adults (49%) not supporting the measure. More than one-third (36%) agree with the ban, while a small 15 percent don’t know where they stand. White Americans (47%) are much more likely than Hispanic (18%), black (7%) or Asian (19%) Americans to agree with the order. Republicans (72%) agree more than Democrats (16%) and evangelicals (60%) agree more than those with other faiths (16%), a category that includes Islam. The pushback on Trump’s executive order and the shifts since the election point to a broader public softening on immigration policies in America. 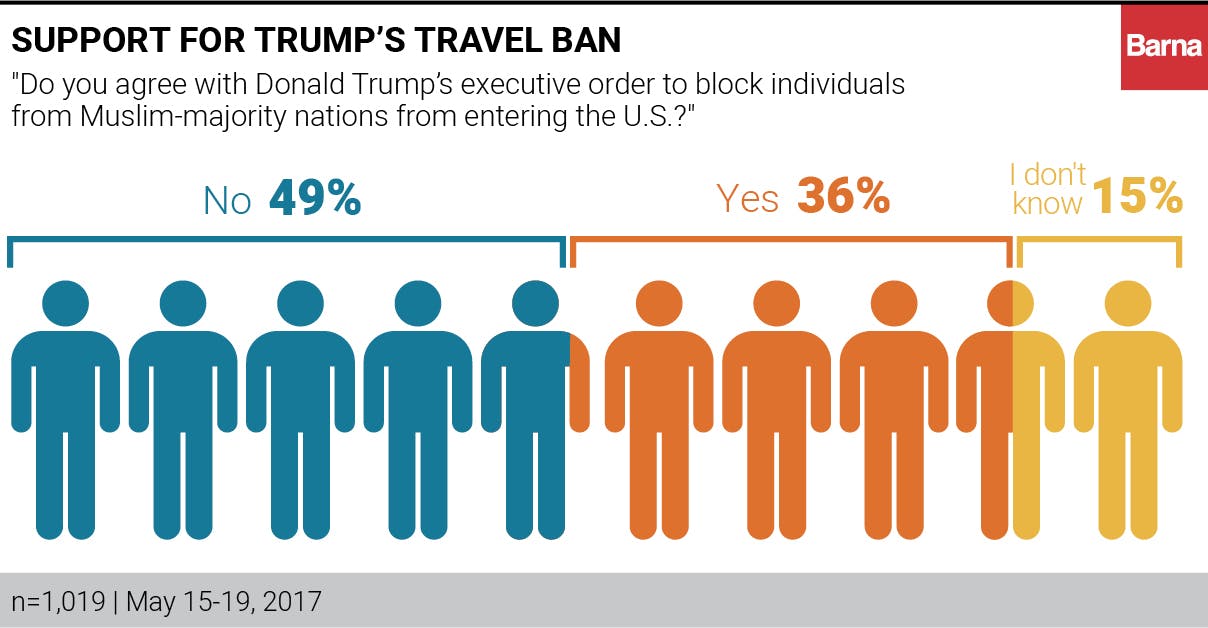 Split Opinions on Trump’s Executive Order on Abortion
Another early executive order in the Trump administration barred United States aid from any nongovernmental organization that also provides abortion counseling or services internationally. This and other bold measures to restrict abortions contributed to conflict between pro-life and pro-choice groups within the country. Barna observed this trend when asking American adults whether they feel government funding should go to organizations that promote abortion. Roughly half (49%) say it shouldn’t, 10 percentage points more than those who say such funding should be permitted (39%). Liberals as a whole are the group most in favor of funding (39% “absolutely”), while Democrats as a party are less certain that the government should support these organizations (25% “absolutely”). Republicans on the other hand are firmly opposed to federal funding for organizations that offer abortion counseling or services (58% “definitely not”) along with evangelicals (78% “definitely not”).

Barna Trends 2018: Your comprehensive guide to the latest cultural, religious and political trends

High Turnover and Low Trust in the Trump Administration
Though White House turnover is common, the Wall Street Journal reports that 34 percent of senior officials in Trump’s White House have quit, been fired or been reassigned during his inaugural year in office, more than double the amount of any other presidency. In mid-2017, Barna asked Americans about their level of confidence in Trump and his team. More than half of Americans (56%) say they do not trust Trump. Meanwhile, more than two in five are willing to trust him either somewhat (23%) or definitely (21%), percentages that double among his voters (51% “definitely” and 43% “somewhat”). A large majority of Republicans (84%) trusts Trump, while at the other extreme, a majority of Democrats has absolutely no trust in him at all (81%). Beyond Trump himself, one in three (33%) says they trust none of the cabinet members or key officials. One in four Republicans (24%), however, trusts all of the people Trump has appointed, while Democrats are most likely to say they have absolutely no trust in his cabinet and administration (53%). 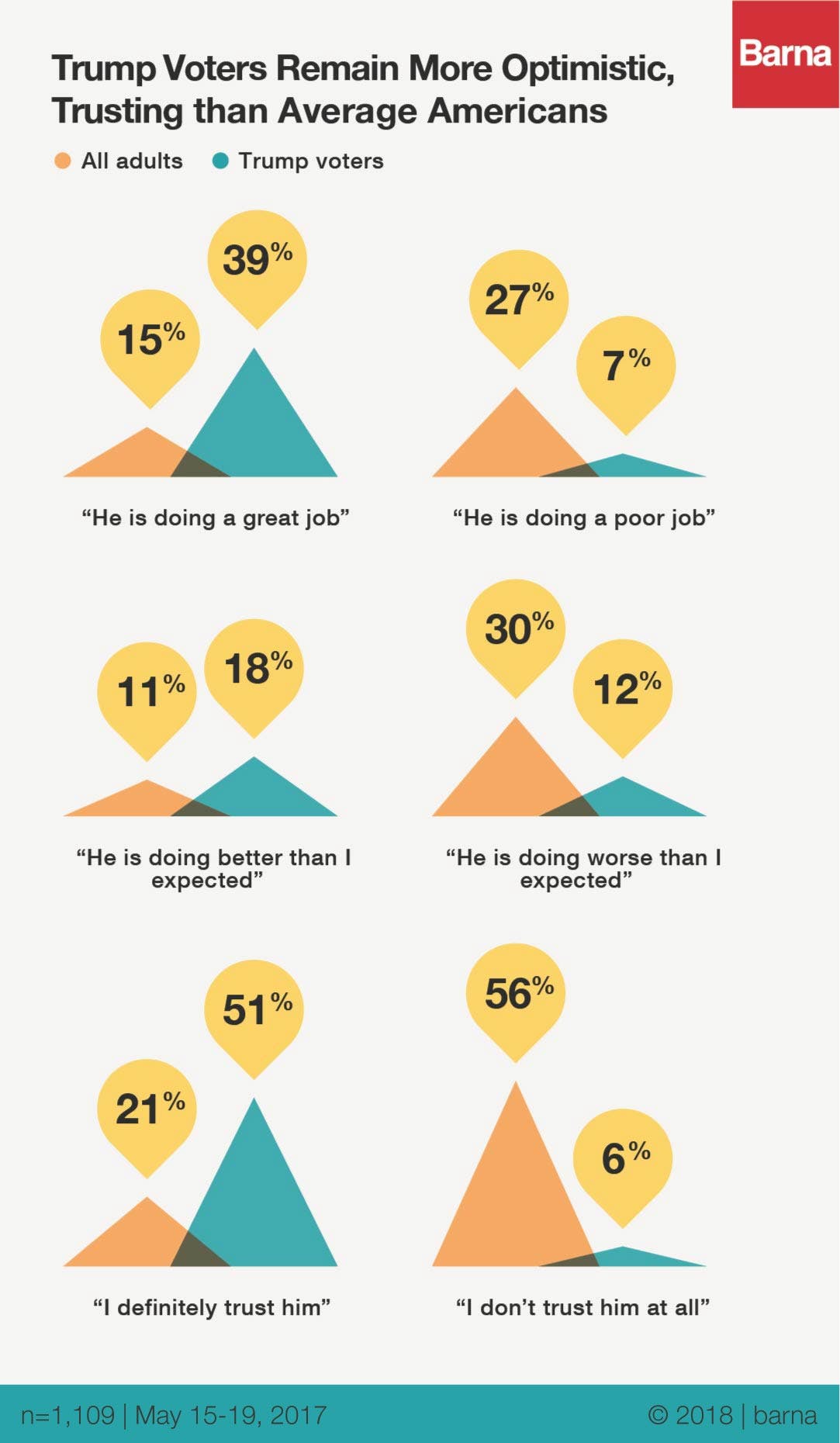 84% of Republicans trust Trump, while at the other extreme, 81% of Democrats have no trust in him. Click To Tweet

Sexual Harassment in Politics
One of the bigger stories of the past year has been the rise of the #MeToo movement, an effort to shed light on the prevalence of sexual harassment. While it was sparked by revelations about big names in entertainment, the focus has also been on politicians like Al Franken and Roy Moore, the Alabama senate candidate who gained Trump’s endorsement amid accusations. Trump himself has faced allegations of harassment and assault and was recorded boasting about making advances on women—a story that, Barna found, did not have much impact on the final outcome of the election. These and other examples have caused many to ask: What counts as sexual harassment? The answer differs based on gender, but Americans say sexual harassment is most often about being touched or groped (women: 96%, men: 86%) or being forced to do something sexual (women: 91%, men: 83%). However, the list encompasses more than just these extremes, and includes someone touching themselves intentionally or masturbating (women: 89%, men: 76%), making sexual comments about someone’s looks or body (women: 86%, men: 70%) and sharing intimate photos or videos of someone without their permission (women: 85%, men: 71%).

Praying for the President—in the Oval Office or in Private
In July, a photo of a group of church leaders laying hands on Trump at the White House went viral. The image continued buzz about the fervent support Trump has enjoyed from prominent evangelicals, but it also prompts the question: How many citizens are privately praying for the president? Overall, 37 percent of all American adults say they do. Despite their high levels of disapproval and low levels of trust in Trump, black Americans are almost as likely as white Americans to pray for him (44% and 41%, respectively). 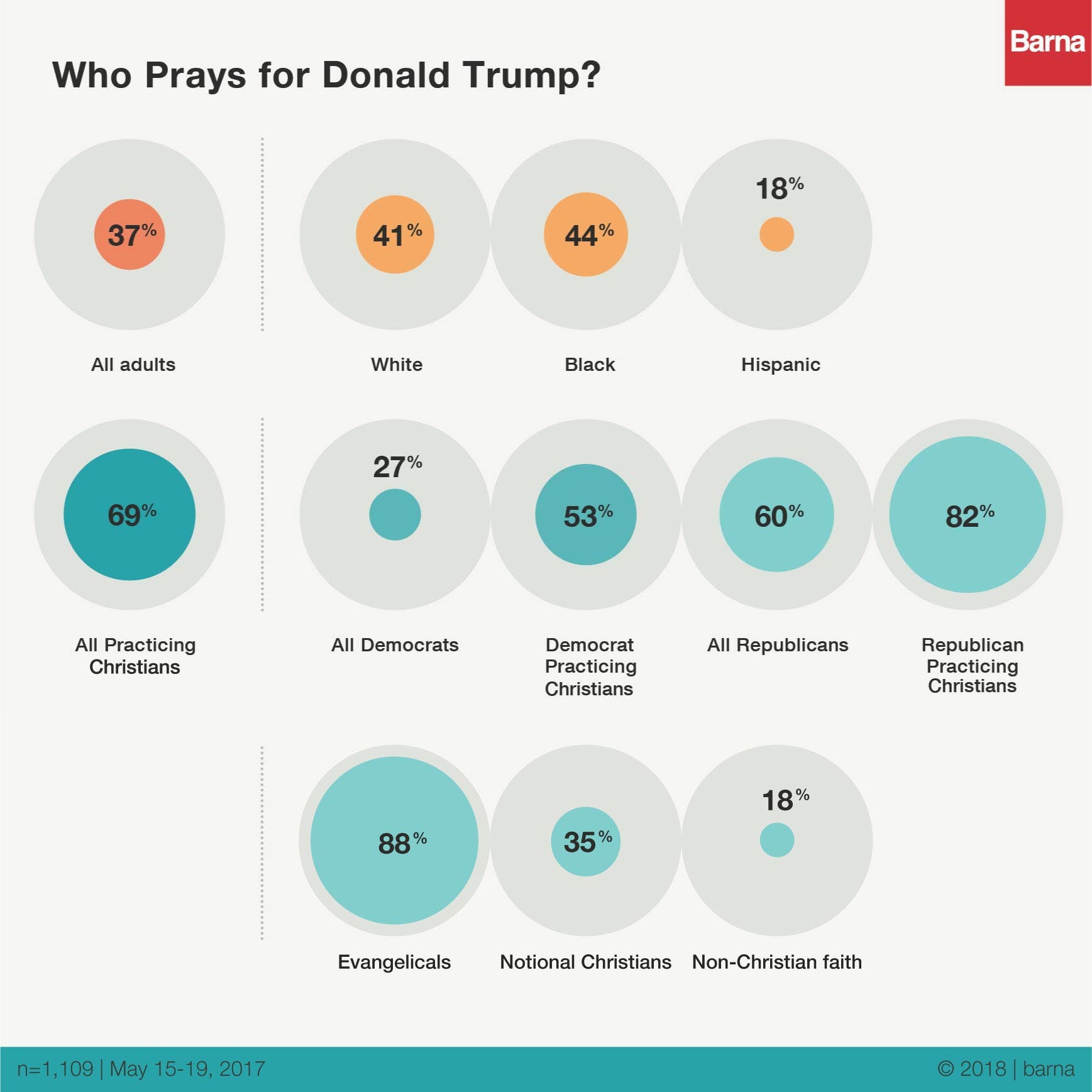 The Trends Shaping a Post-Truth Society

The term “post-truth” is now often used to describe the current political climate in the United States, in which reality is relative and even the facts are open to interpretation. In this sneak peek of the feature story of Barna Trends 2018 (available now), the Barna team identify cultural and spiritual reasons the world is no longer in agreement about anything.