It’s safe to say that a lot happened this year. 2017 launched with the inauguration of President Trump, followed by the record-setting Women’s March just a day later. Hurricanes Irma, Harvey, Jose and Maria battered the Caribbean and the southern United States; Americans witnessed a total solar eclipse; a slew of sexual misconduct allegations launched the #MeToo movement; and tragic violence in Las Vegas, New York and Charlottesville rocked the country.

Throughout the year Barna attempted to make sense of American public opinion on a range of issues related to our daily lives and faith journeys. We conduct tens of thousands of interviews every year, and much of that research is released online. So, to celebrate the end of 2017, we’ve compiled our top 10 most-read articles of the year from our website:

10. Meet the “Spiritual but Not Religious”

In the conclusion of a two-part exploration of faith and spirituality outside church, Barna looked at those who claim to be “spiritual but not religious.” You’ve heard it—maybe even said it—before. But what does it actually mean? Can you be one without the other? Spiritual practice is increasingly moving away from the public rituals of institutional Christianity to the private experience of God within. Barna took a close look at this segment of the American population who identify as spiritual, but hold unorthodox views about God, are ambivalent toward religion and take part in more informal and individual modes of spiritual practice.

The spiritual but not religious hold much looser ideas about God, spiritual practices and religion. Click To Tweet

In October, the New York Times reported more than a dozen initial allegations of sexual harassment, assault or rape against film producer Harvey Weinstein. Those revelations prompted other victims to come forward in unprecedented numbers and public fashion, sparking the #MeToo hashtag and almost daily reports of the sexual misconduct of high-profile figures. The flood of new allegations caused many to ask: What counts as sexual harassment? A national survey of American adults conducted by Barna between October 19-25, 2017 (shortly after the original Weinstein report) asked American adults to identify specific acts they consider to be harassment.

Parents today believe it is harder than ever to raise children—and technology isn’t helping. That’s a key finding at the heart of The Tech-Wise Family: Everyday Steps for Putting Technology in Its Proper Place, a new book by Andy Crouch (a recipient of one of Christianity Today‘s 2018 Book Awards). In the book, Crouch’s clear and incisive thinking is combined with original Barna research among parents, who are feeling the tensions of parenting in a digital age. In this sneak peek, we looked at some of the top revelations about how parents and kids relate to their devices and to each other.

7. The Aging of America’s Pastors

In 1992, the median age of Protestant clergy was 44 years old; 25 years later, the average age is 54. Pastors are getting older, and this has important implications for the future of the church. In partnership with Pepperdine University, Barna conducted a major study into how today’s faith leaders are navigating life and leadership in an age of complexity. The State of Pastors study—revealed at a Pepperdine event earlier in the year—examined the shifting demographic of faith leaders, and the cultural forces responsible for the dramatic changes.

Barna’s State of the Bible study is always a popular one. Many Americans are searching for beacons of hope and moral grounding amidst uncertainty and perceived moral decline. Barna conducted the annual State of the Bible survey, commissioned by American Bible Society, to examine behaviors and beliefs about the Bible. The results show that Americans overwhelmingly believe the Bible is a source of hope and a force for good even as they express growing concern for our nation’s morals. These and other snapshots are included in our list of top 10 findings from 2017’s State of the Bible report.

Barna Trends 2018: What’s New and What’s Next at the Intersection of Faith and Culture

We live in an age when the Bible is read and understood very differently in cities across the country. So how exactly do Americans from each region interact with the Bible? In the annual Bible-Minded Cities report, in partnership with American Bible Society, Barna explored how Bible engagement plays out regionally in the United States. For the second year in a row, Chattanooga, TN was the most Bible-minded city in America, and at the other end of the spectrum, Albany / Schenectady / Troy, NY was the least Bible-minded city—also for the second year in a row. Where does your city rank? 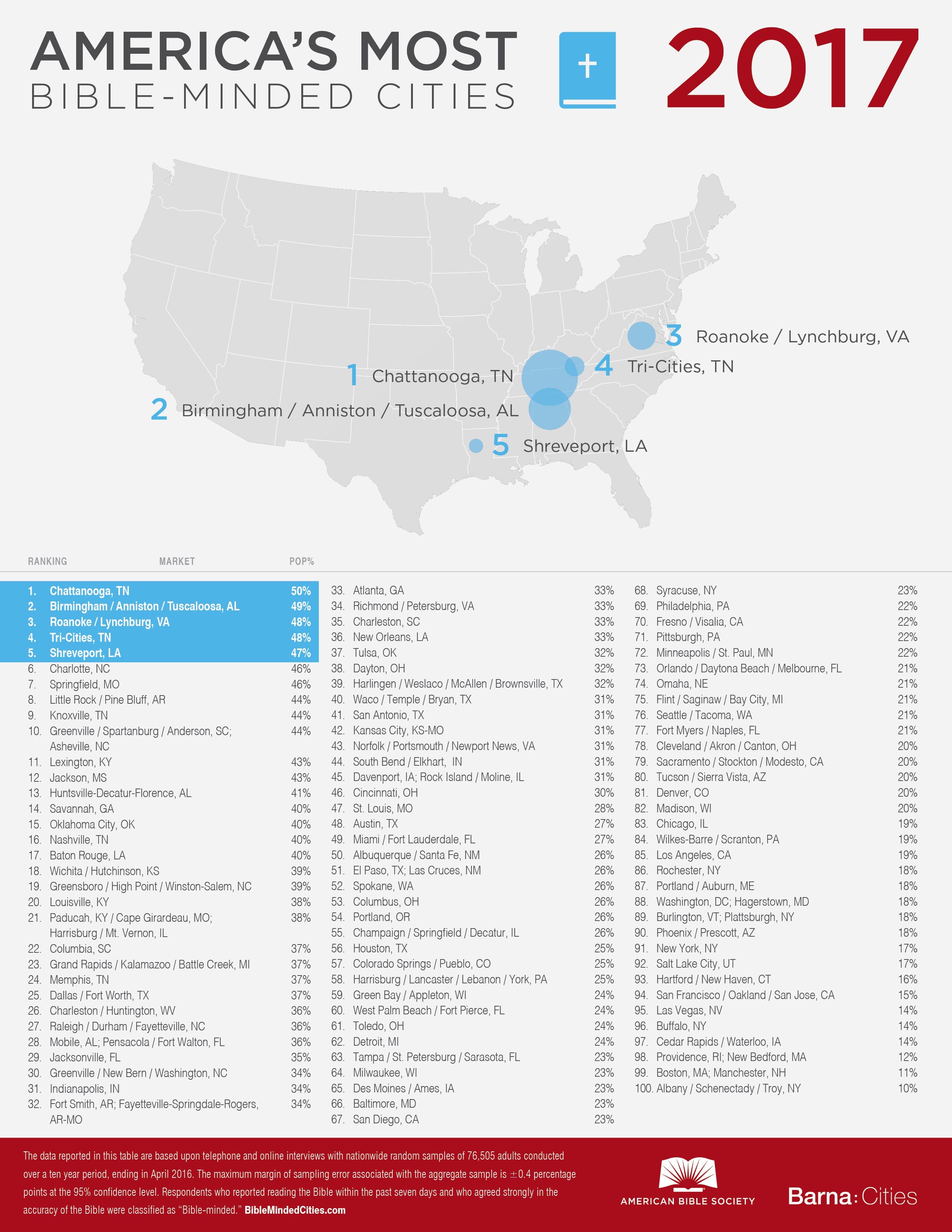 4. Meet Those Who “Love Jesus but Not the Church”

We live in an increasingly secular American culture. In this new age, religion is in retreat from the public square, and traditional institutions like the church are no longer functioning with the cultural authority they once held in generations past. But even though more and more Americans are abandoning the institutional church and its defined boundary markers of religious identity, many still believe in God and practice faith outside its walls. This article was the first in Barna’s two-part exploration of faith and spirituality outside the church, looking specifically at those who “love Jesus but not the church.”

3. Church Attendance Trends Around the Country

Making it into the top three this year is Barna’s ranking of the nation’s largest cities according to church attendance. Americans are attending church less, but those shifts have occurred in varying ways and at different rates throughout the diverse regions and cities across the country. Barna’s report ranks the nation’s largest cities according to the metrics of churched (very active), unchurched and dechurched. Based on the data, almost four in 10 (38%) Americans are active churchgoers, slightly more (43%) are unchurched, and around one-third (34%) is dechurched. But as you’ll see, there are great variations among American cities. 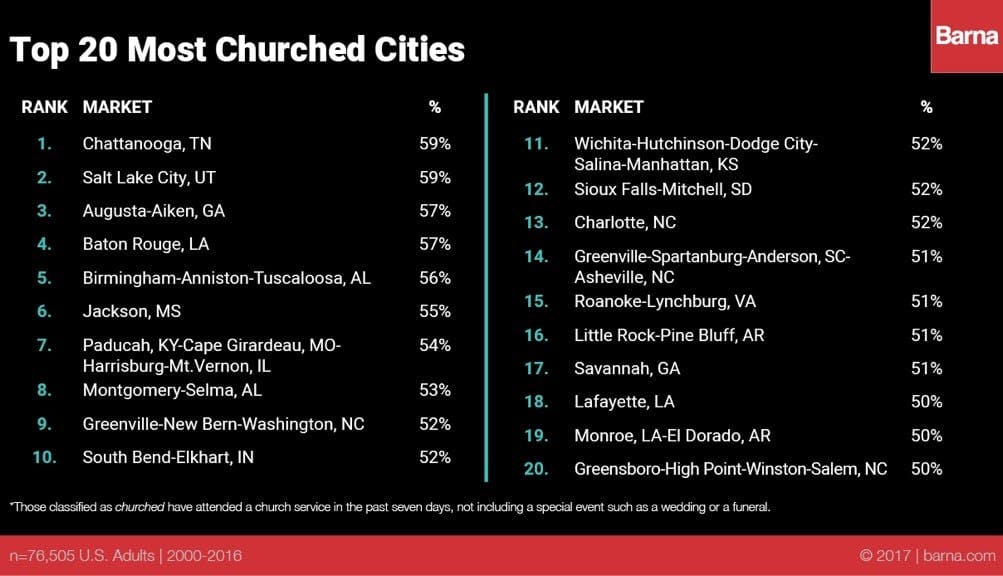 Barna conducted research among practicing Christians in America to gauge how much the tenets of other key worldviews—including new spirituality, secularism, postmodernism and Marxism—have influenced their beliefs about the way the world is and how it ought to be. Barna’s research, conducted in partnership with Summit Ministries, shows that Christians who consider their faith important and attend church regularly don’t always hold traditional biblical views. So, if Christians are open to nonbiblical perspectives, what are they believing?

1. The Most Post-Christian Cities in America: 2017

The most-read article of the year was our list of the most post-Christian cities in America, a metric Barna has developed to measure the changing religious landscape of America. To qualify as “post-Christian,” individuals must meet a set of criteria which identify a lack of Christian identity, belief and practice. These include whether individuals identify as atheist, have never made a commitment to Jesus or have not read the Bible in the last week. According to the study, the most post-Christian city in America is Portland-Auburn, ME, followed by a handful of cities in New England and the Northeast and two on the West Coast. Where does your city rank? 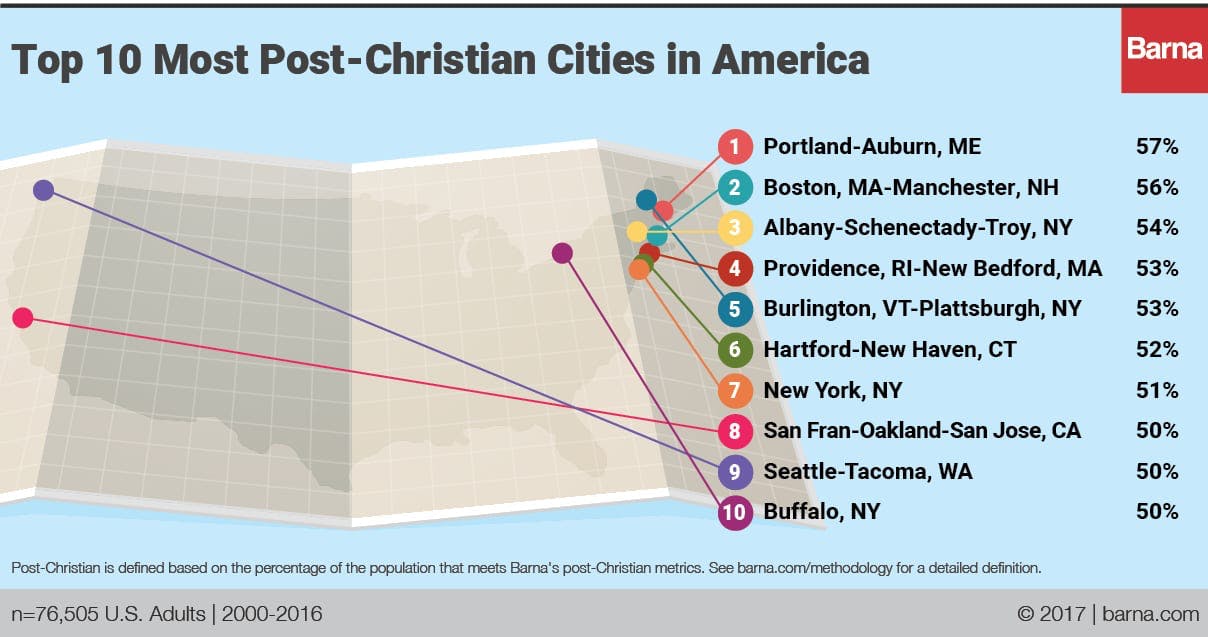 About the Research
The statistics and data throughout these studies have been drawn from a series of national public opinion surveys conducted by Barna Group. All of the studies referenced were conducted by Barna Group, unless otherwise noted, among a nationally representative sample of the population identified. For a more detailed methodology for each study, see the “About the Research” section in the footer of each respective article.

Photo by Bryan Minear on Unsplash

Tips for a Tech-Wise Christmas

When families come together for Christmas, they bring their values and routines with them as well. Increasingly those are shaped by a relationship to technology. Drawing from Andy Crouch’s recent book, The Tech-Wise Family (recently named a recipient of a 2018 CT Book Award), we've compiled some key statistics and helpful tips to make yours a tech-wise home for the holidays.