Communication Is Key in Periods of Pastoral Transition

Leadership transitions within a church are inevitable. Some transitions go off without a hitch—most often those that are planned ahead—while others see the passing of the baton taking longer than expected or producing poor outcomes. While all churches should prepare for leadership transitions and the unforeseen events that may slow the process down, there is one thing that everyone in the church should continue to do as they navigate the shift together: communicate.

A new Barna report produced in partnership with Brotherhood Mutual, Leadership Transitions, examines how churches navigate pastoral change and stay healthy amidst the shift. In a previous article, we looked at what happens before the transition and how directions and motivations steering this change affect certain outcomes for the congregations experiencing them. Below, you’ll find an infographic that stresses the importance of continued communication among church members and staff during the transition.

Communication Is Key During Transitions—But Is Often Neglected
It’s clear that communication is a strong factor in the experience during and success of a transition. In pastoral transitions that had positive outcomes, 41 percent of congregants said the plan and process of succession was communicated very clearly. By contrast, more than half of congregants who had more negative experiences (53%) say the communication was not very clear. Throughout this study, Barna saw that, regardless of the type of leadership transition and other factors surrounding it, communication emerged as a key to success for all parties involved.

Unfortunately, communication with and to congregants is often neglected during transitions. When surveyed, exactly half of congregants (50%) strongly agree their church communicated clearly on a plan and process for succession. A little under one-third of respondents (31%) agreed that the congregation had a high degree of input in the succession process.

In the survey, respondents were asked to rank their perception of the quality of communication, both during and after the transition, in four key realms: the reason for the transition, the timeline of the transition, the process of finding a replacement and the requirements for a replacement. Further, in order to learn about the common traits among smoother or more positive succession processes, Barna grouped congregants based on their perceptions of the overall experience or the ultimate transition outcome (see About the Research section for more details). As the infographic details, whether looking at congregants’ personal reflections or their reported outcomes of a period of leadership transition, strong communication—particularly about the reasons that prompted the succession—was a factor in positive experiences. 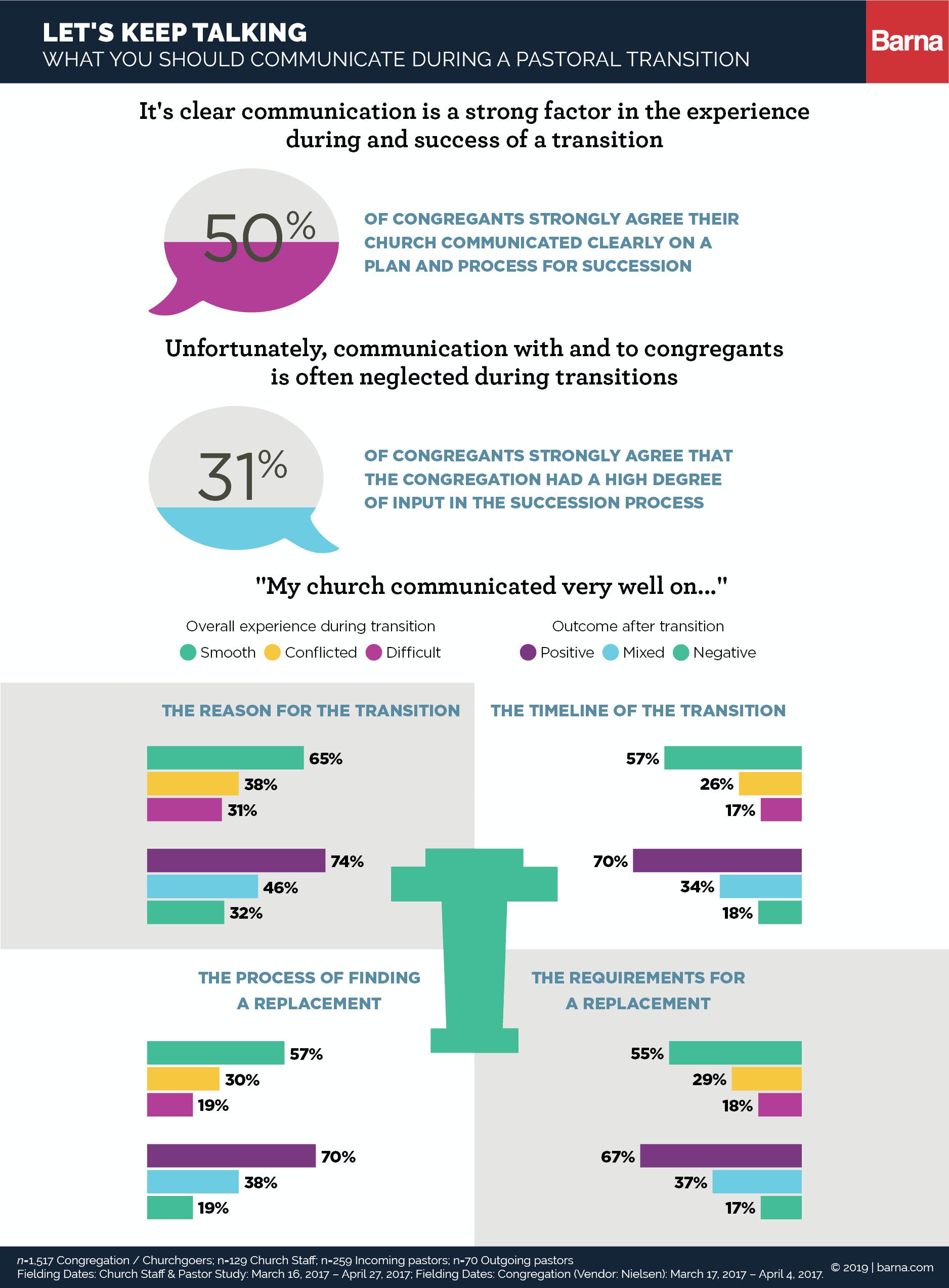 Faith Leaders Comment on the Findings
Alongside new data, analysis and infographics from Barna, Leadership Transitions features insights from a range of scholars and faith leaders. Below are some relevant excerpts from interviews conducted by Barna during the research period, in light of the findings above:

Any advice for leaders undergoing their own transition?
“The emotional and spiritual health of the pastors involved will be key as they have to lead the congregation through this transition even as they’re navigating their own transition. It was very helpful for me to have spiritual direction once I became lead pastor. I felt my differences and needed encouragement to be myself. A role like that has a way of shaping you, and not always in positive ways. I had to learn to be myself in order to bring my personal pastoral strengths and gifting into play.” –Mandy Smith, Lead Pastor at University Christian Church in Cincinnati, Ohio

What else should we remember about transitions?
“Times of transition have a way of humanizing spiritual leaders. … Do we give our leaders space to be human? Especially in transition? Often not. Bitterness can come up, anger. Natural human emotions that need to be processed. That’s part of what it feels like to be a person. A person with feelings. Our pastoral robes or clerical collars are not bulletproof. Leaders hurt. Many pastors learn to serve in spite of that. But when you transition out of a role, it catches up to you. There needs to be space to process the whole range of shortcomings that might have happened in that role. Who do I need to forgive? Who might need to forgive me? Am I carrying pain? How is the Lord using this to make me more like Christ?” –Rev. Darrell Hall, Campus Pastor of Elizabeth Baptist Church’s campus in Conyers, Georgia

Did anything make the transition smoother?
“Two things: real leadership unity and easing into the role. Early on, the board and executive team of pastors met daily to pray. The sentiment was, “We’re in this together. If we stay united, we’ll make it. If we become divided or political, we’ll fall apart.” That set the course for everything. When things began to stabilize, the board of directors slowly stepped out. It was beautiful. At first, the chairman of the board was leading our meetings. Then the next meeting, I would talk a little more, and he would talk a little less. Before long I was leading. It was a gentle transition.” –Doug Sauder, Lead Pastor at Calvary Chapel in Fort Lauderdale, Florida

About the Research
The findings of this study are based on surveys of pastors, church staff, and churchgoing Christians. A total of 249 incoming and 70 outgoing senior pastors completed a quantitative online survey in March and April 2017. These pastors were recruited from Barna’s pastor panel (a database of pastors recruited via probability sampling on annual phone and email surveys) and are representative of U.S. Protestant churches by region, denomination and church size. All respondents were screened to include those who had been part of a senior pastoral transition in the last 5–7 years. The margin of error for incoming pastors is +/- 6.2% at the 95% confidence level and +/- 11.7% for outgoing pastors. Outgoing pastors data is primarily for comparison purposes due to small sample size. Using the same U.S. Protestant pastor panel, Barna also asked pastors to invite church staff members who had experienced a senior pastor succession in the past 5–7 years to complete a similar online survey. A total of 129 staff members qualified and completed the survey. The margin of error for church staff members is +/- 8.6% at the 95% confidence level. Finally, a sample of 1,517 church-going, self-identified Christians (18 years and older) were recruited from an online research panel. Respondents were screened to ensure they had experienced a senior pastor transition in the past 5–7 years and completed an online survey about their experience. At the 95-percent confidence level, the maximum sampling error on the practicing Christians survey is +/- 2.5%.

Photo by Freestocks on Pexels.

Every church inevitably goes through a time of leadership transition. Whether because of retirement, scandal, health complications, a change in calling or some other shift in a pastor’s life or career, churches are bound to walk through a pastoral succession of some kind eventually. A new Barna report produced in partnership with Brotherhood Mutual, Leadership Transitions, addresses this universal reality and examines how churches navigate pastoral change and stay healthy amidst the shift.