Every church inevitably goes through a time of leadership transition. Whether because of retirement, scandal, health complications, a change in calling or some other shift in a pastor’s life or career, churches are bound to walk through a pastoral succession of some kind eventually. A new Barna report produced in partnership with Brotherhood Mutual, Leadership Transitions, addresses this universal reality and examines how churches navigate pastoral change and stay healthy amidst the shift. This article takes a look at what happens before the transition and how directions and motivations steering this change affect certain outcomes for the congregations experiencing them.

The Most Common Type of Leadership Transitions are Pastor-Initiated
Barna analysts grouped pastoral successions into three major types based on the circumstances directing the leadership change. The first is planned transitions, which are planned in advance of the change (17%); the second is pastor-initiated transitions, set into motion by a decision from the outgoing pastor (62%) and the third is forced transitions, commenced by unexpected circumstances such as illness, death or crisis (13%). 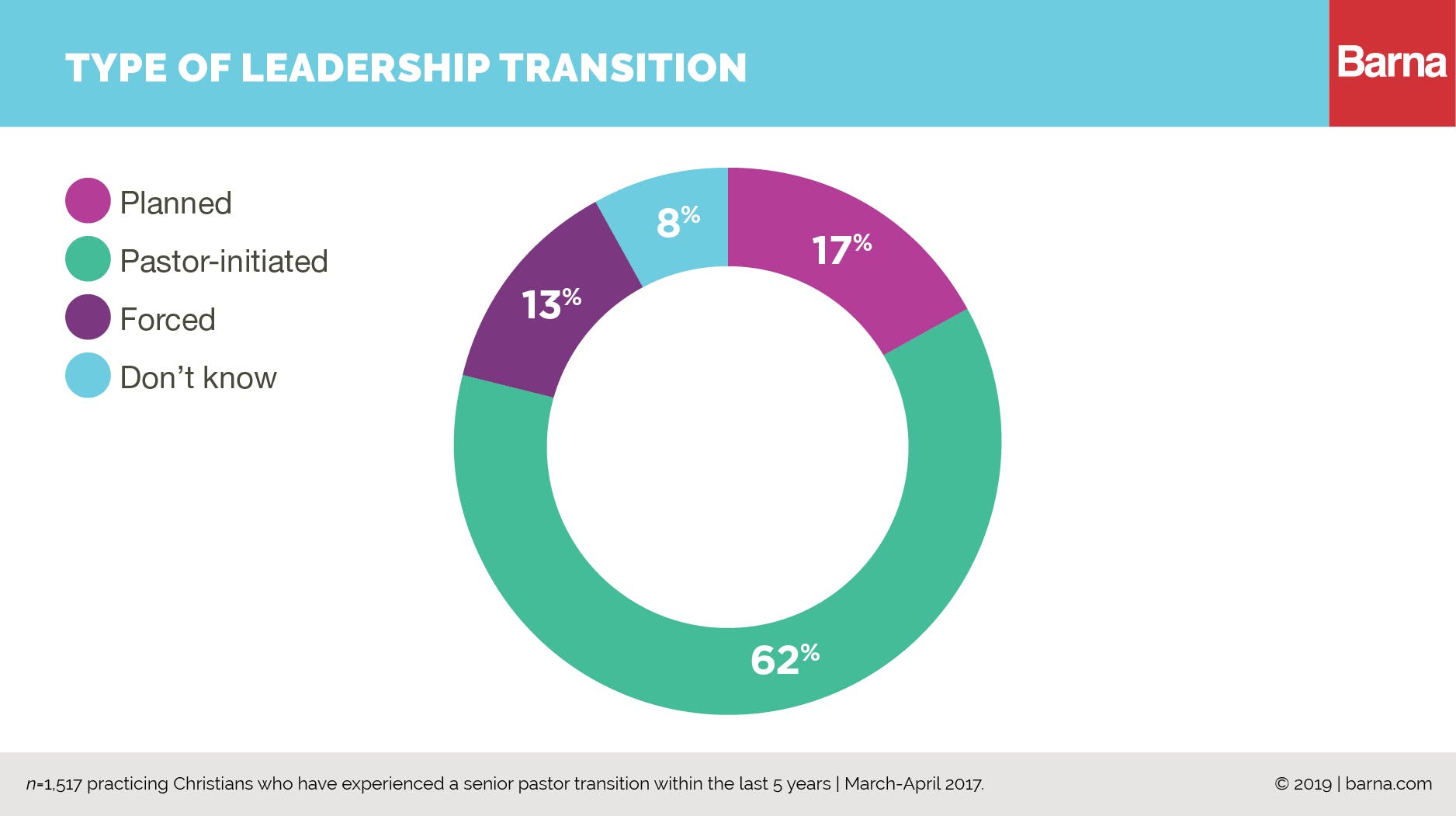 Most Pastors Transition out of their Congregation Entirely
Researchers also looked at three directions of pastoral transition. First, there are pastors who step back from the senior pastor role and move into a co-pastor or associate pastor role (15%). Second, there are pastors who withdraw from the senior pastor role into lay leadership, such as eldership or teaching, or regular membership in the congregation (a majority of the time, the impetus for moving in this direction is a pastor’s retirement) (20%). Thirdly, there are pastors who depart the congregation entirely (56%). Across the board, departing entirely is the most common transitional direction, but it’s more common when the transition is unplanned. When a transition is planned in advance, more than half of outgoing pastors stick around, whether they step back to continue on staff or withdraw to a lay role. 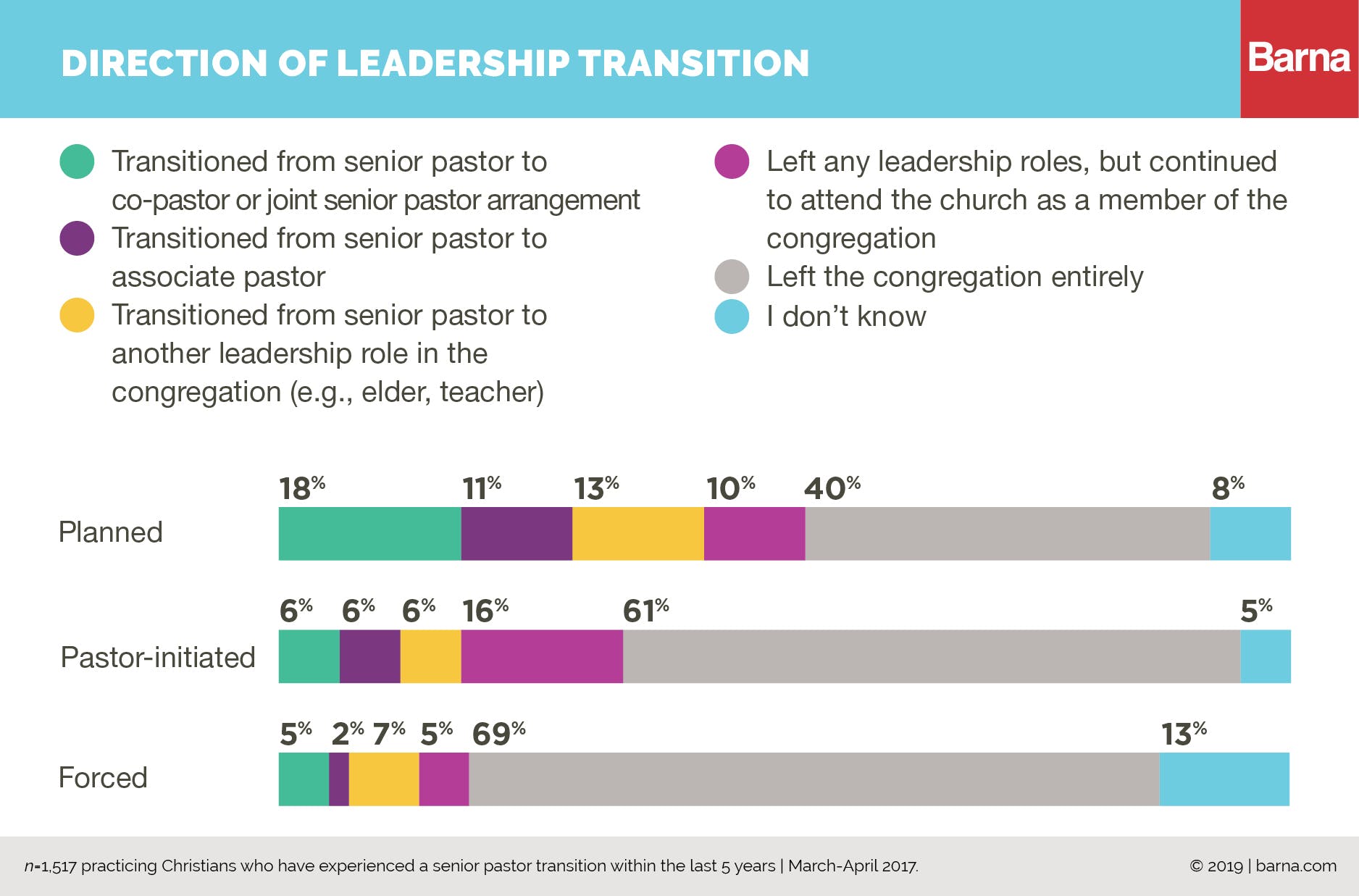 Planned Transitions Tend to Produce Positive Outcomes
When transition is planned in advance, pastoral and leadership staff have time to map out the shift without emotions and lack of time being thrown into the equation. This approach is more likely to lead to positive outcomes once all is said and done. In general, churches where the pastor departs entirely—most common in unplanned transitions—have more tumultuous outcomes. As you might expect, pastors who depart entirely are most likely to move on to pastor another church (34%).

Half of incoming pastors say there was no plan before the previous pastor began to transition out (51%). In addition, one-third of incoming pastors reports that a lack of planning created extreme difficulty (12%) or major obstacles (21%) to achieving a smooth and successful transition. Taken together, these data drive home one of the big takeaways from this research: If you can, plan. Planning ahead can smooth the leadership shift and produce more positive outcomes for everyone involved. As emotions often run hot during a season of change, the more decisions made beforehand or outside the heat of the moment, the better. 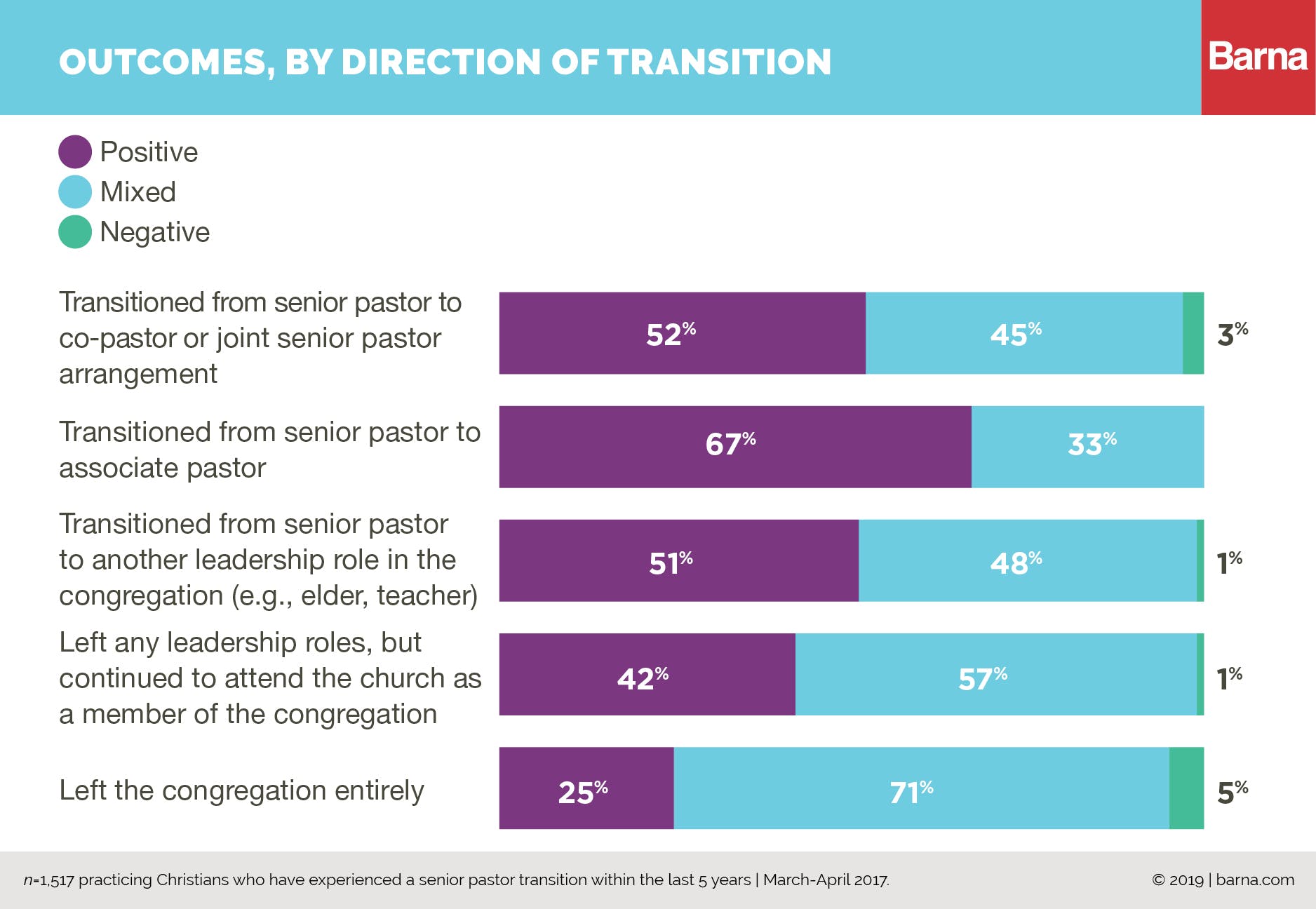 Planning Ahead, Involving Congregation Lead to Better Transitions
When a congregation plans long before a transition is initiated, it can shorten the overall time of a transition (once the process is kicked off ), which appears to be a factor in positive outcomes. Asked about the length of their church’s transition (from succession plan to completed transition) about seven in 10 church staff members report that, with advanced planning, the process was completed within a year (73%); including one-third who says transition was concluded in three months or less (34%). Conversely, transitions with no plan tend to be lengthier. In the absence of a plan, half of church staff say the transition was accomplished in under a year (53%), while one in three reports the process taking longer than one year (35%).

Involving a “multitude of counselors” in the planning process can also positively affect a pastoral transition—and the good news is that most church transitions involve multiple inputs. Most churchgoers report their transition involved teams of people. As a general rule, the higher the degree of congregants’ involvement, the more positive they feel about the final outcome. Eight out of 10 churchgoers with positive outcomes agree that “the congregation had a high degree of input in the succession process” (81%), compared to six in 10 with mixed (61%) and half of those with negative outcomes (53%).

What the Research Means
“Successful leadership transitions require careful planning,” says David Kinnaman, President of Barna Group. “Planned departures go more smoothly, while forced or unplanned transitions are worse on multiple outcomes. And yet, pastors and staff members in this study are split on whether their church had a clear succession plan in place before their transition started. Only about half of churches, at best, appear to have a plan. And those plans are least apparent to staff.

“Congregants have the best overall experience with planned transitions and / or those where the outgoing pastor chooses to retire,” continues Kinnaman. “Thirty-six percent of churchgoers in these circumstances ultimately report a positive outcome within a year of the transition. It’s not that other transition types are always a bad idea. Indeed, they are sometimes unavoidable—and, regardless of the precipitating circumstance, most ultimately turn out okay.

“Strong communication can cover a multitude of succession sins,” concludes Kinnaman, “but a ‘make-it-up-as-we-go’ approach simply has less of a chance of going smoothly, and often fails to find time and intention for other steps that improve a transition, like including multiple types of input in the decision-making. If a governing body can plan ahead for a transition, the church is likely to come out ahead.”

About the Research
The findings of this study are based on surveys of pastors, church staff, and churchgoing Christians. A total of 249 incoming and 70 outgoing senior pastors completed a quantitative online survey in March and April 2017. These pastors were recruited from Barna’s pastor panel (a database of pastors recruited via probability sampling on annual phone and email surveys) and are representative of U.S. Protestant churches by region, denomination and church size. All respondents were screened to include those who had been part of a senior pastoral transition in the last 5–7 years. The margin of error for incoming pastors is +/- 6.2% at the 95% confidence level and +/- 11.7% for outgoing pastors. Outgoing pastors data is primarily for comparison purposes due to small sample size. Using the same U.S. Protestant pastor panel, Barna also asked pastors to invite church staff members who had experienced a senior pastor succession in the past 5–7 years to complete a similar online survey. A total of 129 staff members qualified and completed the survey. The margin of error for church staff members is +/- 8.6% at the 95% confidence level. Finally, a sample of 1,517 church-going, self-identified Christians (18 years and older) were recruited from an online research panel. Respondents were screened to ensure they had experienced a senior pastor transition in the past 5–7 years and completed an online survey about their experience. At the 95-percent confidence level, the maximum sampling error on the practicing Christians survey is +/- 2.5%

Photo by Ekko on Lightstock.

What Is the Church’s Role in Racial Reconciliation?

This August, historians note, marks 400 years since slavery began in the United States. As our country nears this anniversary, many are taking time to reflect on the history of racial injustice in America and their responsibility in healing the wounds of inequality that have been inflicted on black Americans over the last four centuries. A new report, Where Do We Go from Here?, represents the first of several new Barna efforts to study race and the Church and assesses what practicing Christians feel should be done to repair the damage.