We live in a world of competing ideas and worldviews. In an increasingly globalized and interconnected world, Christians are more aware of (and influenced by) disparate views than ever. But just how much have other worldviews crept into Christians’ perspectives? Barna’s research shows that only 17 percent of Christians who consider their faith important and attend church regularly actually have a biblical worldview1. So, if Christians are open to nonbiblical perspectives, what are they believing?

In partnership with Summit Ministries, Barna conducted a study among practicing Christians in America to gauge how much the tenets of other key worldviews—including new spirituality, secularism, postmodernism and Marxism—have influenced Christians’ beliefs about the way the world is and how it ought to be. Barna’s new research found strong agreement with ideas unique to nonbiblical worldviews among practicing Christians. This widespread influence upon Christian thinking is evident not only among competing worldviews, but even among competing religions; for example, nearly four in 10 (38%) practicing Christians are sympathetic to some Muslim teachings (an aspect of the study Barna will explore elsewhere).

Here are a few notable findings among practicing Christians:

Before diving into the four worldviews, and as illustrated in the charts below, there are a few key demographic themes that emerge from the data. First, Millennials and Gen-Xers, who came of age in a less Christianized context, are, in some cases, up to eight times more likely to accept these views than Boomers and Elders. The same is true of gender; males are generally more open to these worldviews than women, often at a 2:1 ratio. Another trend is that Americans who live in cities, often melting pots of ideas and cultures, are more accepting of these views than those in either suburban or rural areas. And finally, when looking at ethnicity, Americans of color are, in about half of the cases, more likely than white Americans to embrace these worldviews.

Other worldviews influence Christian beliefs about the way the world is and how it ought to be. Click To Tweet

New Spirituality
Practicing Christians find the claims of New Spirituality among the most enticing, perhaps because it holds a positive view of religion, emphasizes the supernatural and simultaneously feeds into a growing dissatisfaction with institutions. For instance, almost three in 10 (28%) practicing Christians strongly agree that “all people pray to the same god or spirit, no matter what name they use for that spiritual being.” Further, the belief that “meaning and purpose come from becoming one with all that is” has captured the minds of more than one-quarter of practicing Christians (27%).

The New Spirituality worldview has also inched its way into Christian ethics; one-third of practicing Christians (32%) strongly agree that “if you do good, you will receive good, and if you do bad, you will receive bad.” This karmic statement, though not explicitly from scripture, appeals to many Christians’ sense of ultimate justice. For example, another Barna study found that 52 percent of practicing Christians strongly agree that the Bible teaches “God helps those who help themselves.”

Overall, at least 61 percent of practicing Christians embrace at least one of the ideas rooted in New Spirituality. 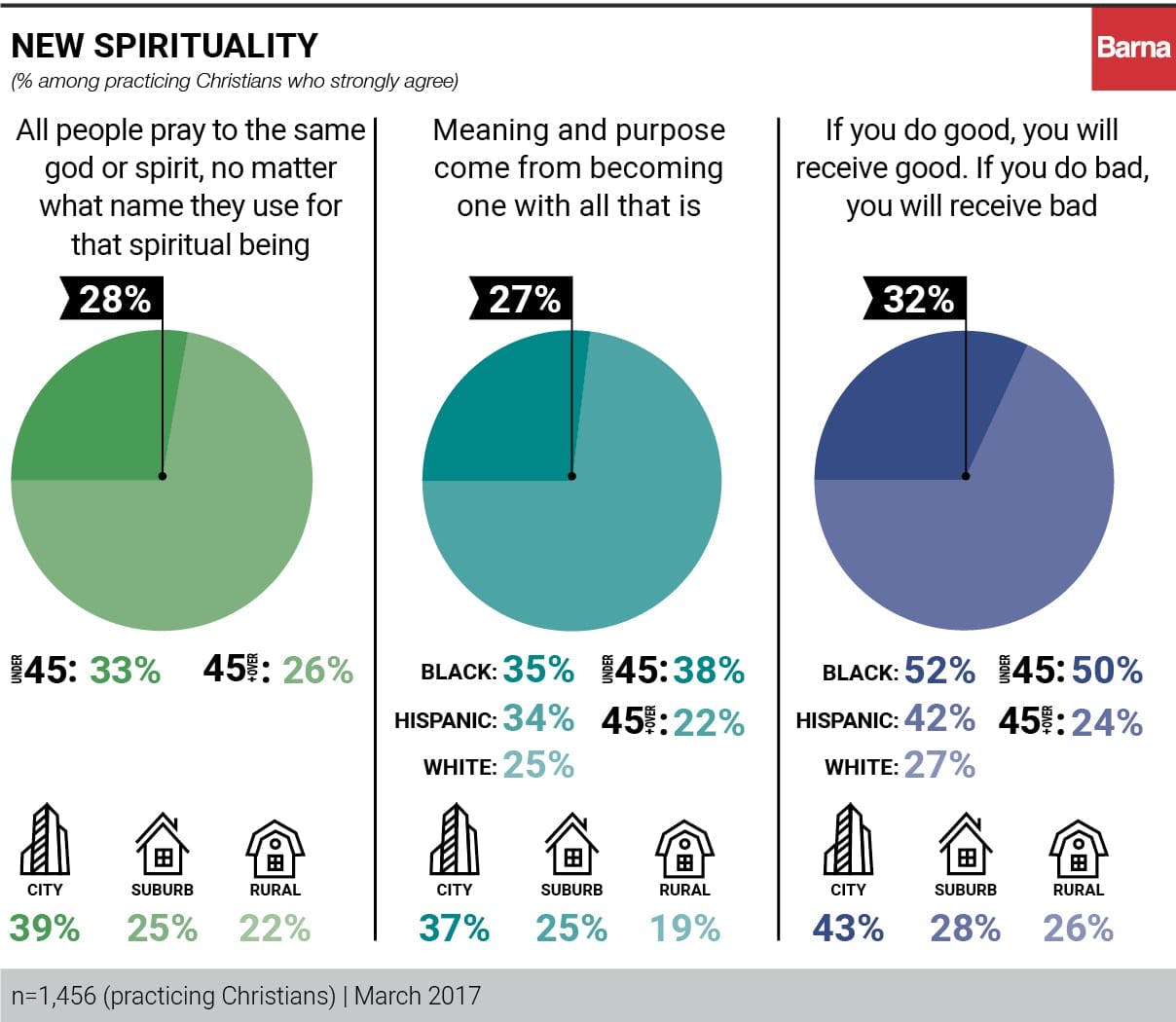 Secularism
The secular worldview prioritizes the scientific method as an explanatory framework for life and advances a rational and materialistic view of the world. For the most part, practicing Christians resist scientism and a Darwinian belief: Only one in 10 (10%) strongly agree that “a belief must be proven by science to know it is true.” Believing that human beings are made in the image of God, and not just highly evolved matter, Christians see value as inherent; only 13 percent of practicing Christians strongly agree that “a person’s life is valuable only if society sees it as valuable.”

However, a larger contingent of practicing Christians are more inclined toward materialism, the view that the material world is all there is. For them, “meaning and purpose comes from working hard to earn as much as possible so you can make the most of life,” a view held by one-fifth of practicing Christians (20%). Black (24%) and Hispanic (27%) practicing Christians, as well as Catholics (31%)—who are inclined to embrace a more works-based approach to faith—are the most open to this view. Younger adults and city-dwellers also have materialistic inclinations; Millennials and Gen-Xers (34% and 32%, respectively) are three times as likely to strongly agree with this premise than Boomers and Elders (10% and 11%, respectively), and those who live in cities (31%) are twice as likely as their suburban or rural counterparts (14%).

The researchers found that 29 percent of practicing Christians believe at least one of the secular statements assessed in the project. 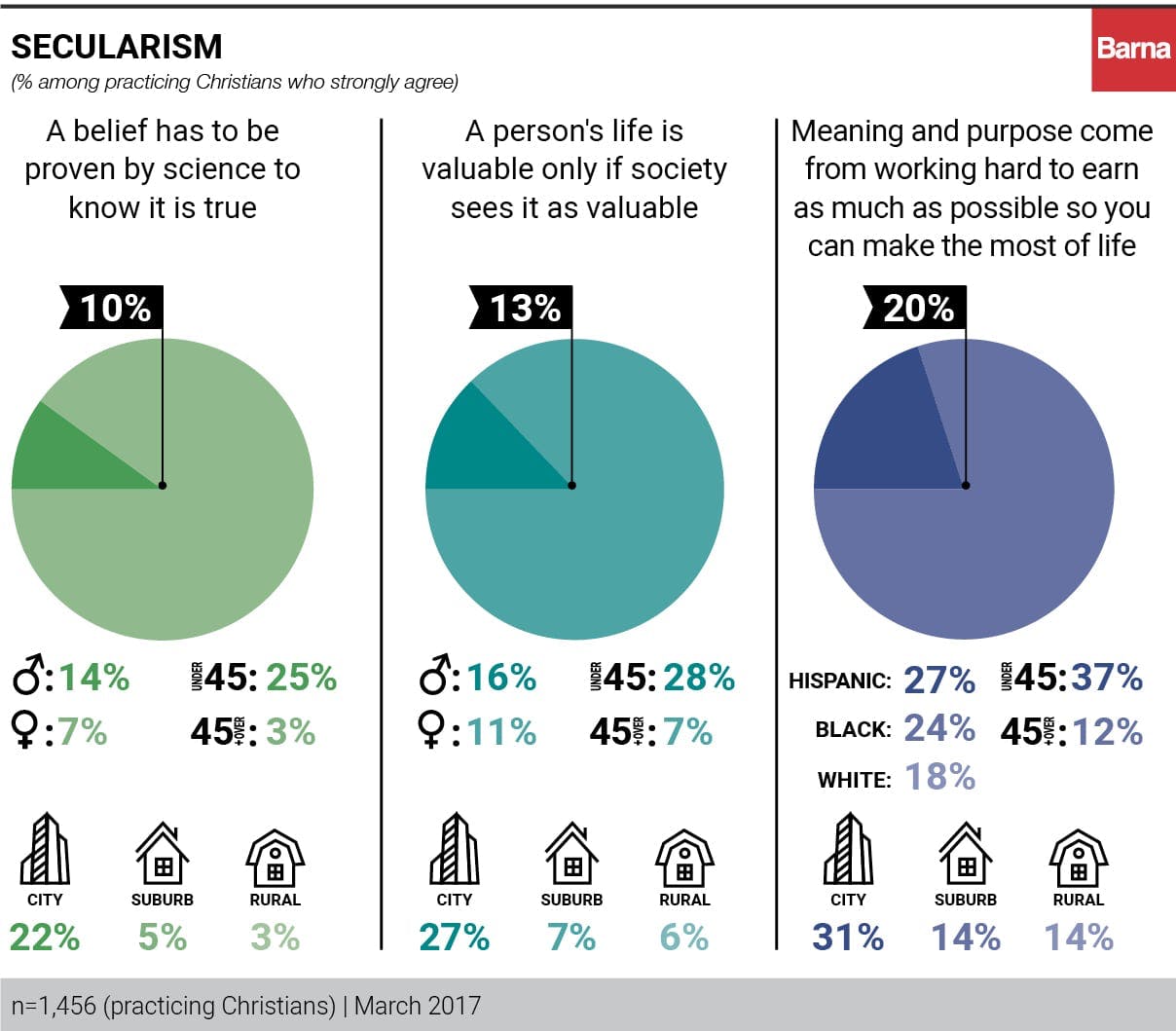 Postmodernism
Emerging as a critique of rationalism—the belief that everything can be explained objectively through the scientific method—postmodernism advances the idea that there is no such thing as objectivity. Postmodern thought argues that claims on ultimate reality are subjective by virtue of their context—that is, we are all limited by our experience, and at best we can know only what is true for ourselves.

For example, almost one-fifth of practicing Christians (19%) strongly agree that “no one can know for certain what meaning and purpose there is to life.” A similar perspective also resonates with many Christians when it comes to views of morality: Almost one-quarter of practicing Christians (23%) strongly agree that “what is morally right or wrong depends on what an individual believes.” Less educated Americans (high school or less) are more likely to affirm this view than their college-educated counterparts (31% compared to 21%).

23% of Christians strongly agree: “what is right or wrong depends on what an individual believes.” Click To Tweet

Compelled by a larger story or metanarrative about the world, Christians are more inclined to defend objective truth, but are somewhat sympathetic to the postmodern insistence that capital “T” truth claims lead to oppression. Just 15 percent of practicing Christians strongly agree that “if your beliefs offend someone or hurt their feelings, they are wrong.” Black practicing Christians, historically on the receiving end of hurtful ideologies, are more likely to agree than white practicing Christians (22% compared to 13%).

As a whole, more than half (54%) of practicing Christians embrace at least one of the postmodern statements assessed in the research. 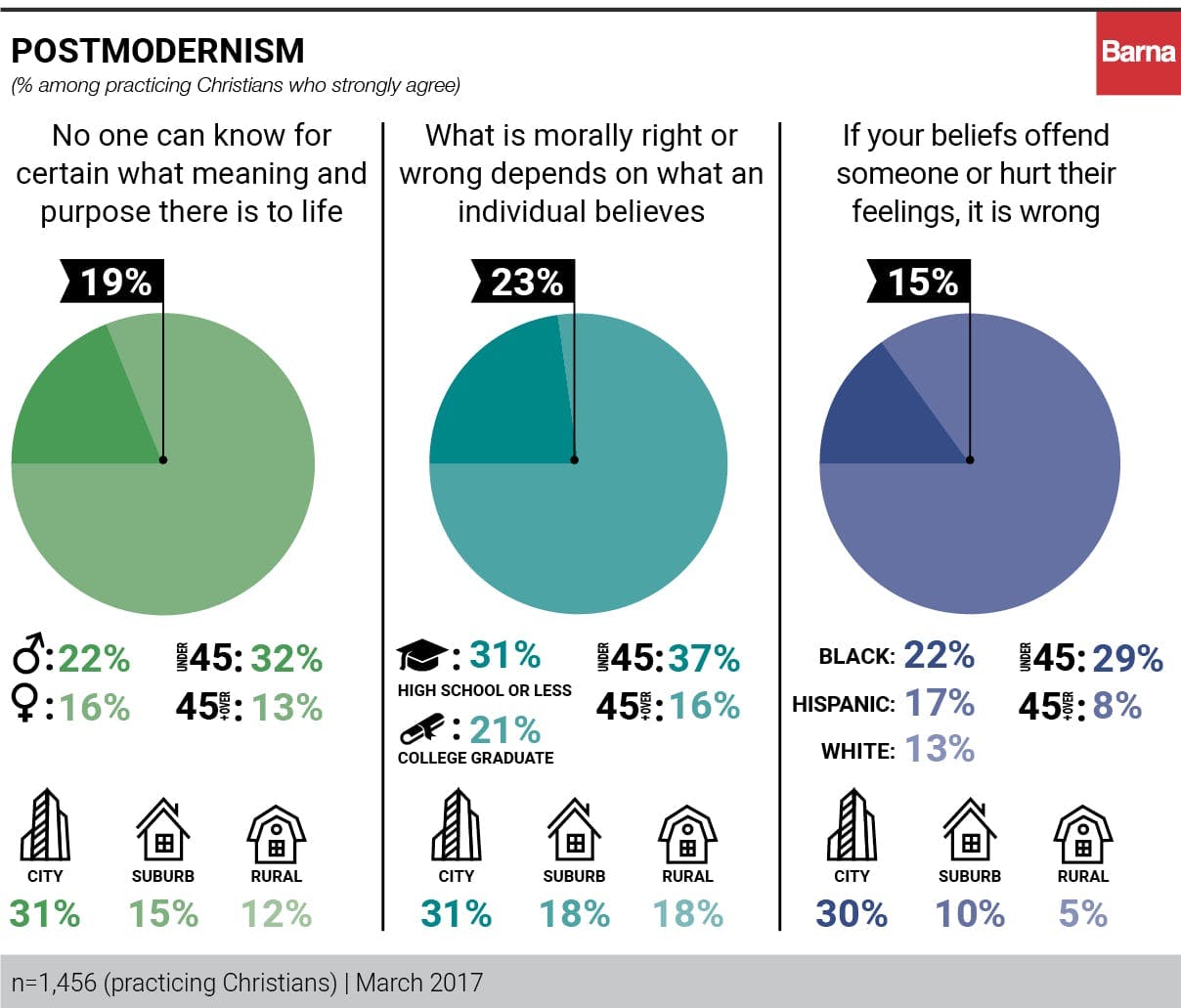 Marxism
Bernie Sanders came very close to winning his party’s nomination last year in the democratic primaries. Running on a platform of democratic socialism, he won a great deal of support (particularly among young voters) by tapping into a deep discontentment with the economic realities of capitalism. Marxism as a worldview stands in opposition to the economics of capitalism and falls more in line with socialist or communist political ideologies. Marxism, though, is also founded on an irreligious—or even religiously hostile—foundation. Though not a single practicing Christian says they would actually vote for a communist party candidate (0%) and only 3 percent for the socialist party, some of the key economic and political tenets of a Marxist worldview are supported by practicing Christians, though less so than other worldviews.

For instance, only one in nine (11%) strongly agree that “private property encourages greed and envy.” This is more pronounced among practicing Christian Millennials (20%) and Gen-Xers (22%), who are four to six times as likely to believe this when compared to Boomers (4%) or Elders (5%). For socialists, reining in greed is the purview of the state, and 14 percent of practicing Christians strongly agree that “the government, rather than individuals, should control as much of the resources as necessary to ensure that everyone gets their fair share.” Black Americans are twice as likely to affirm this economic view than are white Americans (23% compared to 12%). Furthermore, one in six practicing Christians (15%) strongly disagrees that “if the government leaves businesses alone, they will mostly do what’s right.” In other words, this proportion believes significant government regulation is necessary for the good of society. Again, a lack of trust in the impartiality of economic policies or businesses is more common among black Americans than white Americans (26% compared to 12%), though it could be seen as a pushback against a political and economic system that has failed them, rather than a rejection of biblical perspective.

In total, Barna found that 36 percent of practicing Christians embraced at least one of the Marxist statements assessed in the research. 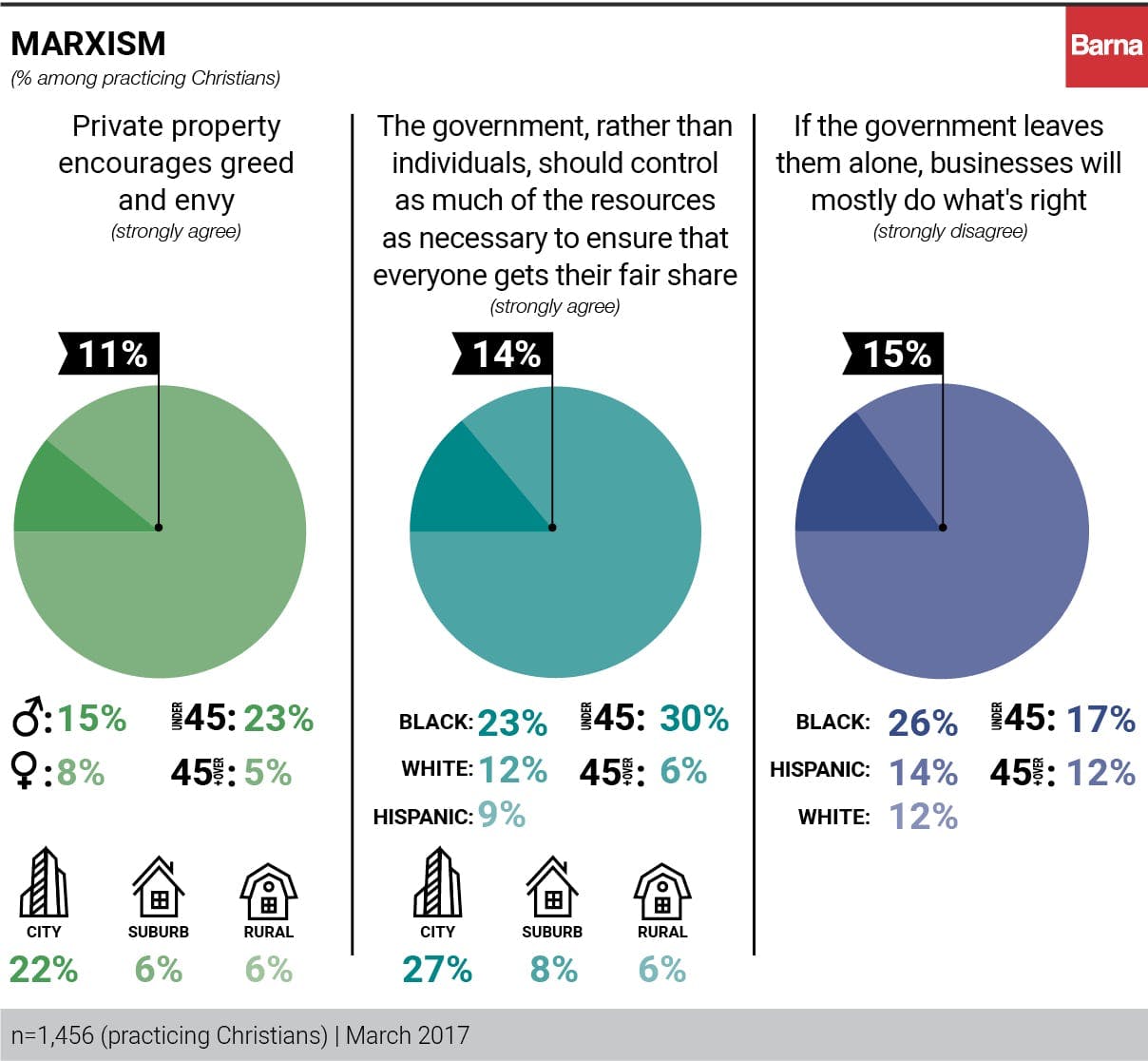 What the Research Means
“This research really crystalizes what Barna has been tracking in our country as an ongoing shift away from Christianity as the basis for a shared worldview. We have observed and reported on increasing pluralism, relativism and moral decline among Americans and even in the Church. Nevertheless, it is striking how pervasive some of these beliefs are among people who are actively engaged in the Christian faith,” Brooke Hempell, senior vice president of research for Barna, says.

“What stood out most to us was how stark the shift was between the Boomer and Gen-Xer generations,” Hempell remarks. “We expected Millennials to be most influenced by other worldviews, but the most dramatic increase in support for these ideals occurs with the generation before them. It’s no surprise, then, that the impact we see today in our social fabric is so pervasive, given that these ideas have been taking root for two generations.

“The challenge with competing worldviews is that there are fragments of similarities to some Christian teachings, and some may recognize and latch on to these ideas, not realizing they are distortions of biblical truths. The call for the Church, and its teachers and thinkers, is to help Christians dissect popular beliefs before allowing them to settle in their own ideology,” Hempell says. “Informed thinking is essential to developing and maintaining a healthy biblical worldview and faith as well as being able to have productive dialogue with those who espouse other beliefs.”

About the Research
Research with practicing Christians (who go to church at least monthly and consider their faith very important in their life) included 1,456 web-based surveys conducted among a representative sample of adults over the age of 18 in each of the 50 United States. The survey was conducted in March 2017. The sampling error for this study is plus or minus 2.4%, at the 95% confidence level. Minimal statistical weighting was used to calibrate the sample to known population percentages in relation to demographic variables.

1Barna has tracked beliefs that make up a “biblical worldview” since 1995, with the data included in this article (17% of practicing Christians have a biblical worldview) coming from an OmniPoll conducted in an online study of 1,066 U.S. adults in July of 2015. Barna defines “biblical worldview” as believing that absolute moral truth exists; the Bible is totally accurate in all of the principles it teaches; Satan is considered to be a real being or force, not merely symbolic; a person cannot earn their way into Heaven by trying to be good or do good works; Jesus Christ lived a sinless life on earth; and God is the all-knowing, all-powerful creator of the world who still rules the universe today.

Barna asked if Americans agree that scripture says “God helps those who help themselves” in a January 2013 survey sponsored by American Bible Society, including 1,005 telephone surveys of U.S. adults.

This research was commissioned by Summit Ministries, a worldview-apologetic outreach in Colorado. For more information about their newest book, The Secret Battle of Ideas About God, go to summit.org and secretbattlebook.com.