The idea of beliefs that transcend generations is beautiful, but is it also beneficial? That is, does an “inherited” religious identity contribute to the maturation and flourishing of the individual and their faith in the long run? How does this experience compare with that of people who come to Christianity on their own, without positive faith influences in childhood or later in life? The recent Barna report Households of Faith, produced in partnership with Lutheran Hour Ministries, finds some (at times surprising) links between faith heritage and present faith practice.

Most Practicing Christians Say Their Faith Was Passed Down to Them
For most practicing Christian adults in this study, the early, formative days of discipleship occur in their family of origin. (As the goal of this research was to look at faith formation among households, individuals living by themselves are excluded from this study. See the About the Research section for more details about the methodology.) Usually, respondents say Christianity was “passed down” to them by a particular relative (59%), though sometimes another family member was exploring faith around the same time as the respondent (11%). More than half of those who report growing up in the faith (57%) say they were Christian at the time of their birth, a response that is revealing either of their theology or of how extensively Christianity permeated their upbringing. 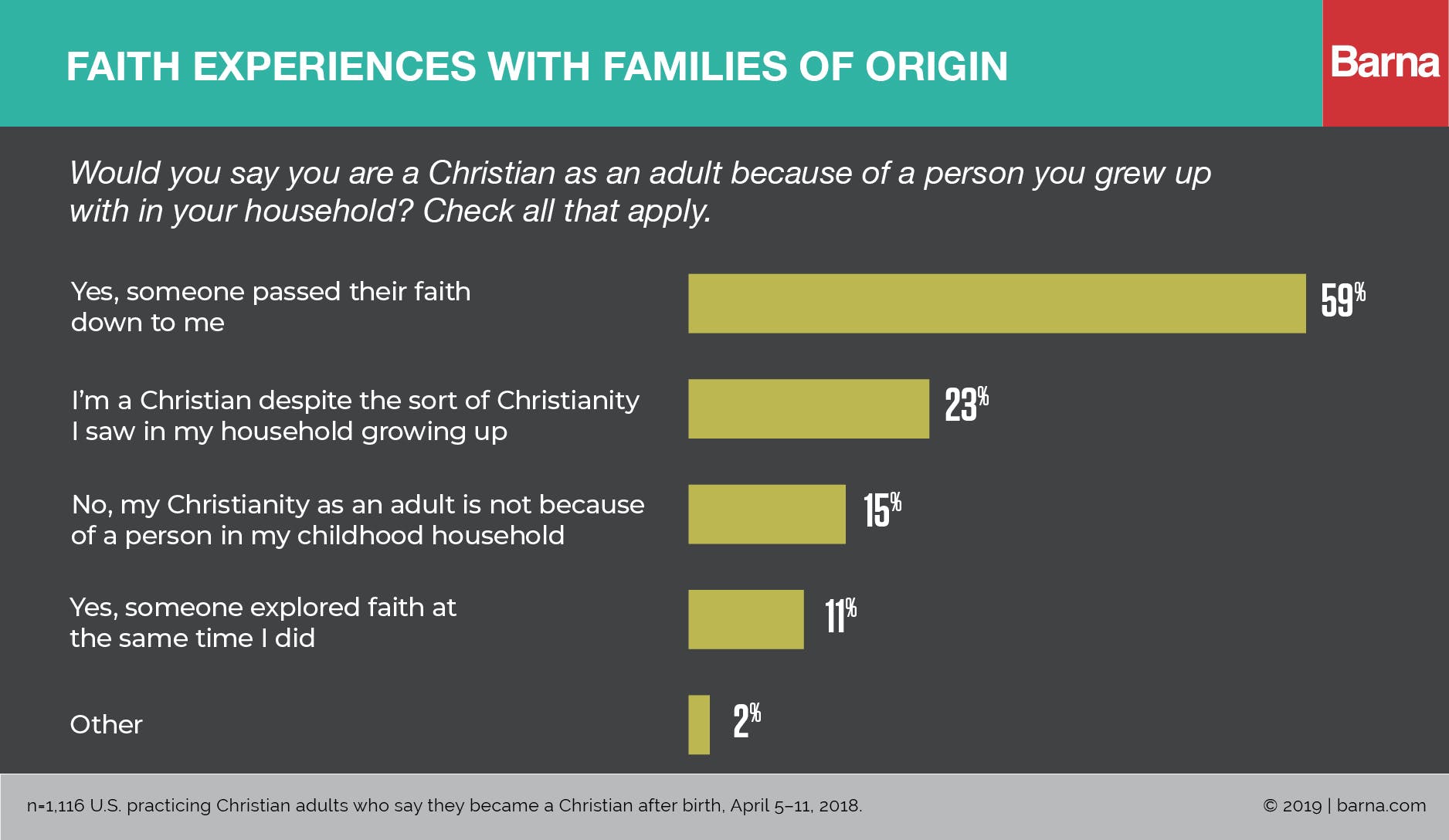 Over a third of respondents came to faith for reasons other than a positive interaction in their upbringing, including one in four (23%) who says it occurred in spite of a negative example of Christianity in the home. Typically, individuals without strong family roots in the religion say they became Christians later in their youth or, as is the case for 55 percent of this group, during adulthood.

Respondents could select all Christian heritage scenarios that applied, and we find that a variety of family-of-origin experiences overlap. For example, some people who say Christianity was passed down to them also say someone else explored faith at the same time (48%) or that they had a negative example of Christianity in their household while growing up (17%). As you can see, inheriting faith is a common experience among respondents, but it does not eliminate the possibility of simultaneous experiences—even bad ones—with Christianity.

Practicing Christians most often credit their parents as the individuals who helped impart faith to them. In this and other responses throughout the study, it appears that spiritual development in the home is driven by mothers. Two-thirds (68%) say they were most influenced by the Christian model of their mothers, compared to less than half (46%) who point to their fathers. More than a third (37%) looks back further into their lineage, to the spiritual influence of their grandparents, usually a grandmother. 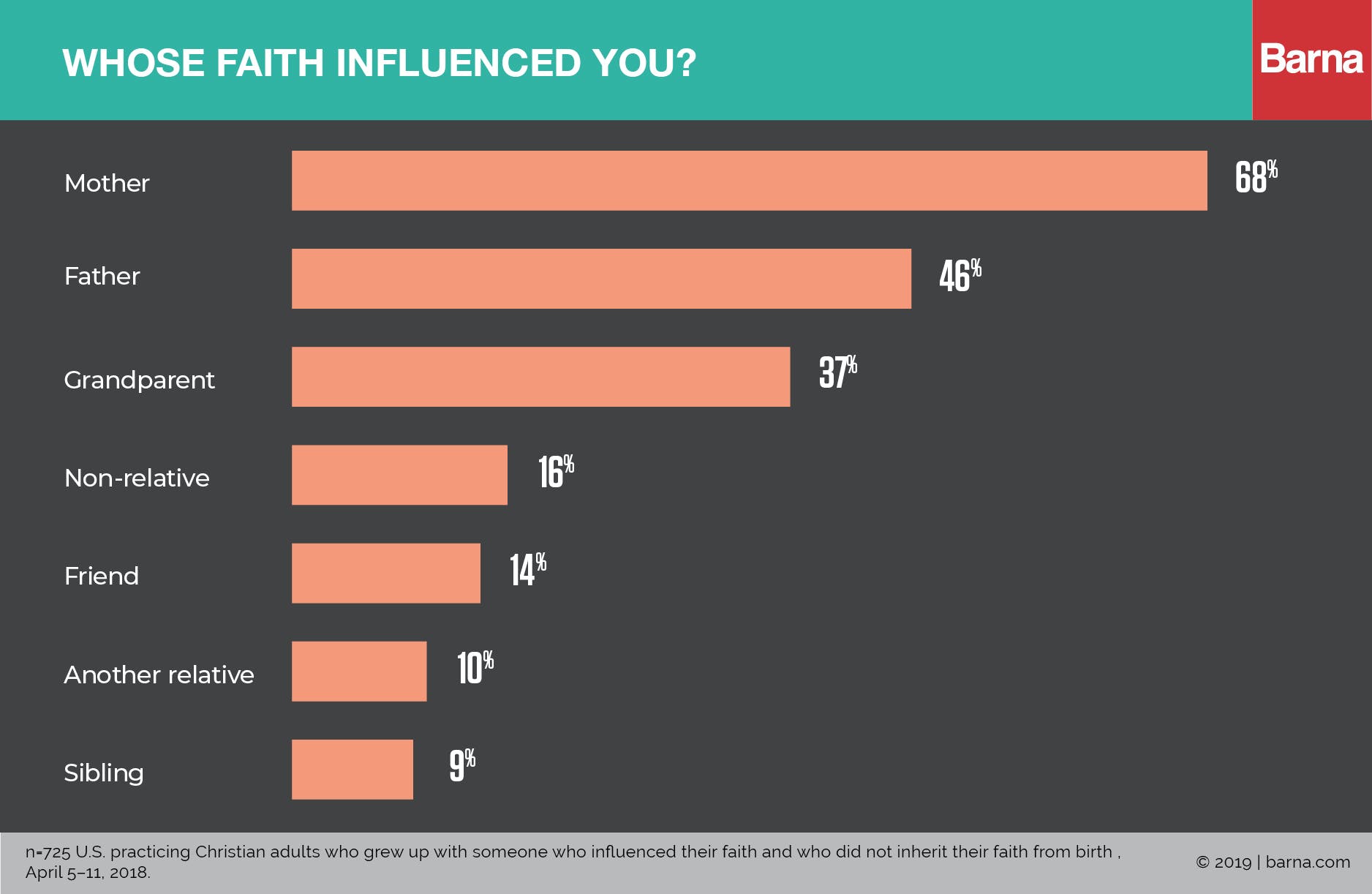 Spiritual Upbringing Impacts Theology
A person’s experience with Christianity while growing up does seem linked to their belief system even into adulthood, but a strong Christian heritage does not automatically equate to a strong Christian faith. Rather, taking ownership of one’s beliefs or finding rich community may be required to build upon—or overcome—the spiritual experiences of one’s upbringing.

Respondents who say someone passed Christianity down to them (40%) are actually more likely to hold a nominal faith, which is not characterized by a personal commitment to faith in Jesus (compared to 30% who had a negative Christian model in their upbringing and 21% of those who had no Christian influence in their upbringing). Their theology also tends to be less characterized by some of the traditional tenets of Christianity. Fewer people in this group view God as the creator and ruler of the universe (79%) or affirm that they will go to heaven because of belief in Jesus’ forgiveness (62%). They more often think of Satan as merely symbolic (54% agree strongly + somewhat), and 64 percent agree at least somewhat that people go to heaven if they are generally good.

At the same time, those with a “family tree faith” are open and expressive. Whether they have a cursory or serious connection to Christianity as an adult, they are more likely to have spiritual conversations in their current households—environments which they describe as “peaceful” and “safe” and indicate are quite welcoming: Six in 10 (61%) regularly practice hospitality, compared to half of the respondents who did not carry Christianity with them from their upbringing (50%). It’s possible that people who became Christians very young within a family context continue to model a lifestyle built around community and traditions.

Those whose Christian faith was absent or not positively nurtured in their families of origin could have a harder time establishing spiritual rituals and community in their current households. But though their religious experience may appear less communal or instinctual, it is still thoughtful and assured. Consider that those who say their faith exists despite negative Christian examples in their family of origin are the group most certain of the inerrancy of scripture (94% agree strongly + somewhat), or that those whose Christianity is not linked to their upbringing at all are most convinced of salvation through belief in Jesus Christ (82%). It’s possible that reacting against a negative or inconsistent model of faith prompts one to investigate and cling to these tenets. What these adults lack in religious legacy, they may find in devotion and discipleship. The roots of their faith are often younger, but they seem to be well-tended. 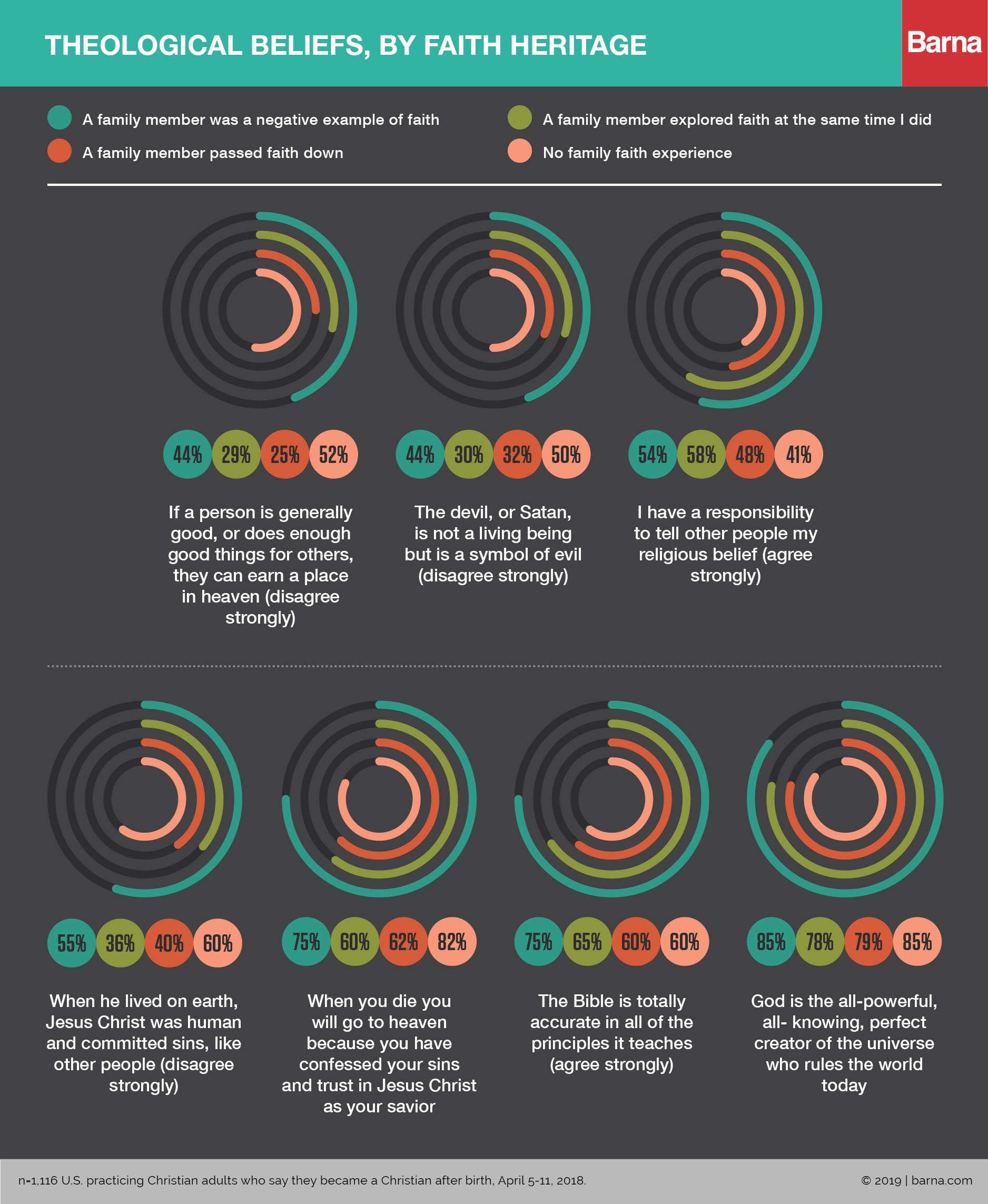 One way or another, Christians need outside influences for robust faith formation. Adults whose upbringing did not plant them in meaningful Christian teachings or traditions might grow in community with their extended households. Meanwhile, adults with a long-held Christian identity might look to resources and voices beyond their family of origin to re-examine or strengthen their beliefs.

Learning from Those with an Unlikely Faith
What causes an adult who might be disillusioned with the Church and Christianity to stick with or come back to the faith? This group of practicing Christian adults who say they have come by a deep faith in spite of the fact that they had negative—or, at the least, mixed—feelings about the way Christianity was presented to them in their youth, were targeted for qualitative interviews. Their responses point to some estrangement in family units—and the problem seems to lie mostly with their parents.

Though they still note fathers and mothers as a Christian presence in their upbringing, this group is more likely to name siblings, grandparents, other relatives and close friends as important spiritual figures in their youth. Their parents aren’t the ones who set a Christian example, or were sources of help for other needs, like advice, sympathy or money. They tended to explore faith with someone outside their immediate family.

They found loving community elsewhere, and later in life, they tend to work out their faith with their partner / spouse and friends who feel like family. They have, in other words, found refuge and stability—perhaps for the first time—in a faith and community that they chose and cultivated on their own. To them, Christianity isn’t an heirloom; it’s an anchor.

About the Research
This study began with in-depth qualitative interviews with highly active Christians of various household types: two nuclear families (white Millennial parents with young children), one multi-generational family (Asian American household with children and boarders), one single-parent family (African American family that is sometimes multi-generational) and a roommate household (white Millennial males). Key insights about what makes a vibrant household or how faith grows in a household setting were initially identified through this research.

The results from the qualitative interviews were used to shape the questionnaire for quantitative online surveys conducted from April 5–11, 2018. In total, 2,347 interviews were conducted, including 448 with teens between the ages of 13–17. In order to qualify, respondents had to identify as Christian, agree strongly that their faith is very important in their life today and report attending a church service at least once in the past month. The margin of error for the total sample is +/- 1.8 percentage points at the 95 percent confidence level.

Individuals living by themselves are excluded from this study. This sample is not designed to be representative of all household types in the U.S. As the goal of this study is to observe interactions among practicing Christians who live together and how faith is experienced and transmitted among them, households of a single person did not qualify for participation.

How do Christians define missions? Recent data published in The Great Disconnect, a Barna report produced in partnership with Mission India, show that Christians’ and pastors’ perceptions of missions—whether it’s a calling or a mandate—vary widely. This article goes a step further with the data, exploring exactly what definition Christians give to the term “missions” and what actions they believe best fit into this definition.