A Snapshot of Faith Practice Across Age Groups

How often do Christians attend church? What do they believe about God? Do they regularly open their Bibles? Barna has been tracking religious values, beliefs, attitudes and behaviors for 35 years, and in an increasingly secular context, it’s helpful to pause and take stock of the landscape of faith in America today. Drawing from FaithView, Barna’s new online database for city, state and national spiritual profiles, let’s take a fresh look at one of the questions we often hear as religion researchers: How do core metrics of faith look by generation, as Christians progress through age and stage of life?

Overall, though commitment levels are certainly higher among older adults in the United States, Christians who practice their faith do so in a remarkably similar fashion, regardless of their generation. And though, as other Barna data note, few Christian Millennials today are willing to share their faith with others (and in fact think it’s wrong to do so), their level of belief and practice is mostly on par with other generations.

Learn more about how Barna’s FaithView tool can give you a customizable and comprehensive view of Christians in your area.

Older Generations Are More Likely to Identify with & Practice Christianity
Reporting on a three-year average, FaithView shows us that Elders are the most likely generation of U.S. adults to self-identify as Christian (83%). This trends downward as we move through the generations: Boomers are close behind at eight in 10 (80%), followed by almost three-quarters of Gen X (73%) and a big drop among Millennials, with just shy of two-thirds claiming Christianity (64%). The same is true among the more committed category of practicing Christians (defined by Barna as self-identified Christians who attend church every month and say their faith is very important in their lives). Almost four in 10 Elders (37%) practice their faith in this way, again trending down from Boomers (30%) to Gen X (26%) and Millennials (22%). Accordingly, we see an overall 9 percent difference between Christian Elders (66%) who strongly agree that their religious faith is very important in their life and Millennials (57%) who say the same. (Though Gen Z is not shown here, Barna has seen early signs that a decline in affiliation is extending to teens in this next generation, who are more likely than older adults to identify as atheists.) 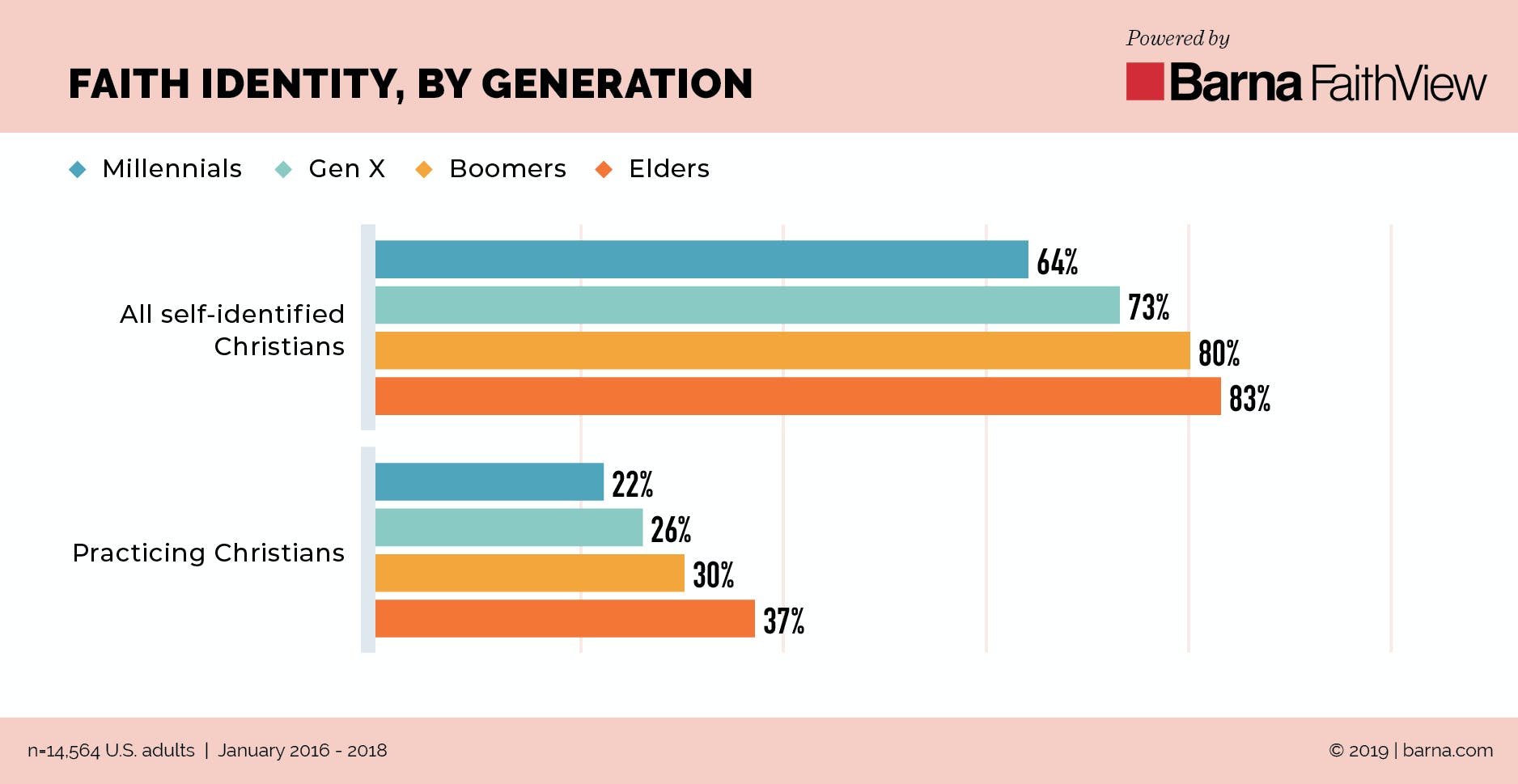 Faith Practice Stays Steady Across Christian Generations
Though younger generations are less likely to be affiliated with Christianity in the first place, younger Christians still show signs of faithfulness similar to their elder peers in the Church. Across several markers of spiritual discipline, FaithView offers an overview of the gap between all self-identified Christians and practicing Christians, which follow patterns among all ages.

Christians of all ages report high participation in prayer (perhaps not a surprise given that the “spiritual but not religious” are a fast growing group in America today and prayer is an accessible, less institutionally mediated faith practice). Among self-identified Christians overall, Elders and Boomers lead in reporting a weekly habit of prayer (84% each), followed by Gen X (82%) and Millennials (78%). The same trend plays out for practicing Christians, with the highest participation among Boomers and Elders (93% and 90% respectively) and slightly lower rates for the younger generations (87% Gen X, 86% Millennials).

Regular Bible-reading is less common than prayer, but the pattern of participation is the same, and generations generally resemble each other in this routine. Practicing Christians are almost twice as likely as self-identified Christians to have read the Bible in the last 7 days, with Millennials and Boomers reporting the top percentages (71% each). 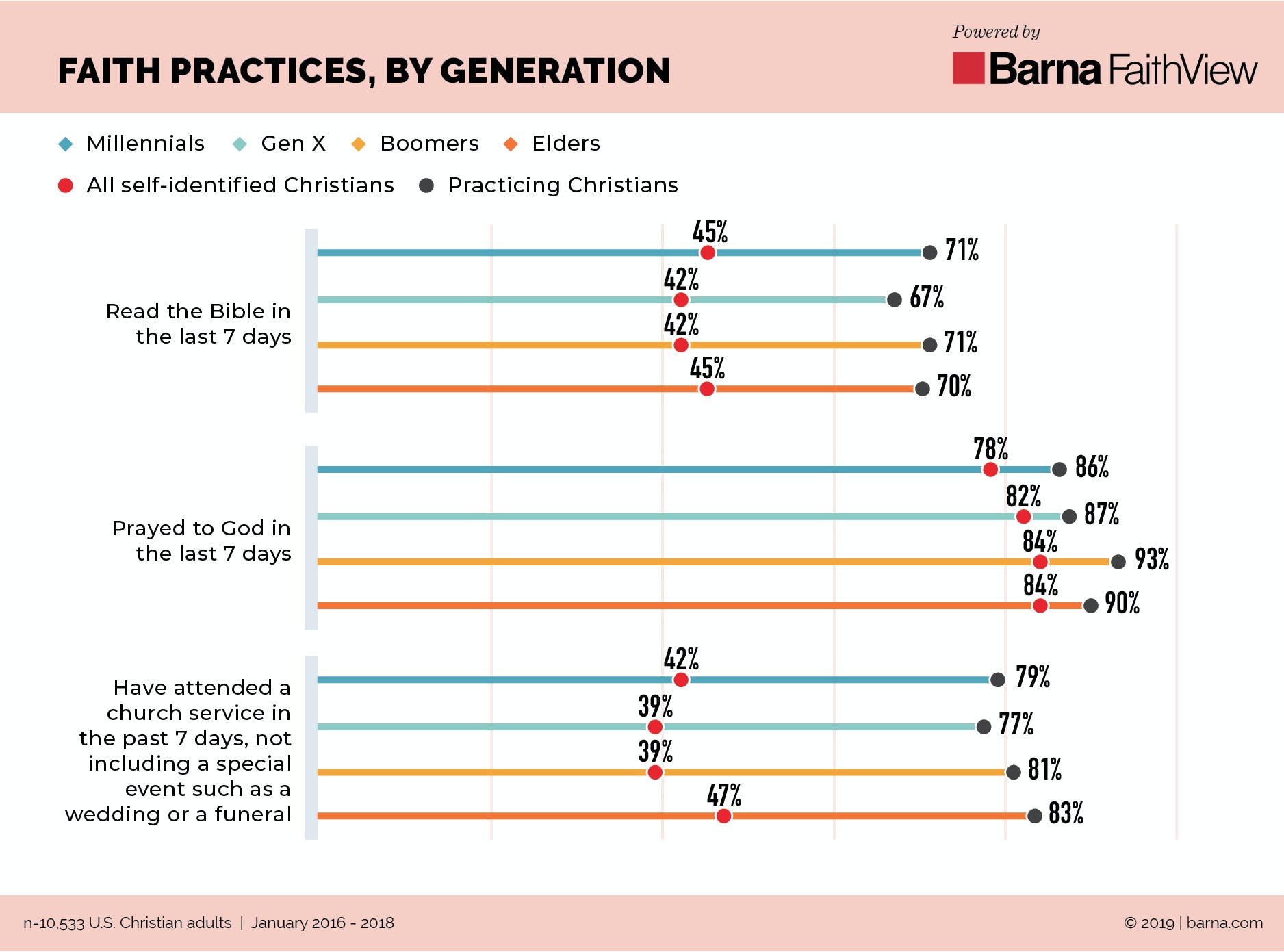 Views of God, the Bible & Salvation
FaithView allows breakdowns of Christians’ core beliefs, revealing general agreement among young and old Christians on many points. When it comes to what could be considered an orthodox view of God, as “the all-powerful, all-knowing, perfect creator of the universe who rules the world today,” around three-quarters of all self-identified Christians believe this to be true, across age cohorts. For practicing Christians, more than nine in 10 Elders (91%) see God in this way, a proportion that lowers slightly down the generational spectrum (89% Boomers, 85% Gen X, 84% Millennials).

There is little difference among generations when it comes to agreeing that the Bible is totally accurate in all of its teachings. About four in 10 of all Christians and two-thirds of practicing Christians profess the Bible’s credibility. Belief about salvation and heaven, too, is shared among the generations. At least six in 10 self-identified Christians believe they will go to heaven because they confessed their sins and accepted Jesus as savior. More practicing Christians affirm this view of salvation; Elders (73%) and Millennials (72%) are essentially on par, with some slight variation for Boomers (75%) and Gen X (70%).

Despite decreasing rates of religious affiliation in the midst of a broader pattern of secularization, we see that both younger and older generations similarly connect to their faith through certain tenets and disciplines.

How does a resilient, lasting faith develop among Millennials and Gen Z? Join us on September 10 for the free webcast, Faith for the Future, a Barna digital summit on what we’re learning about 18–35-year-olds’ spiritual beliefs, practices and needs. 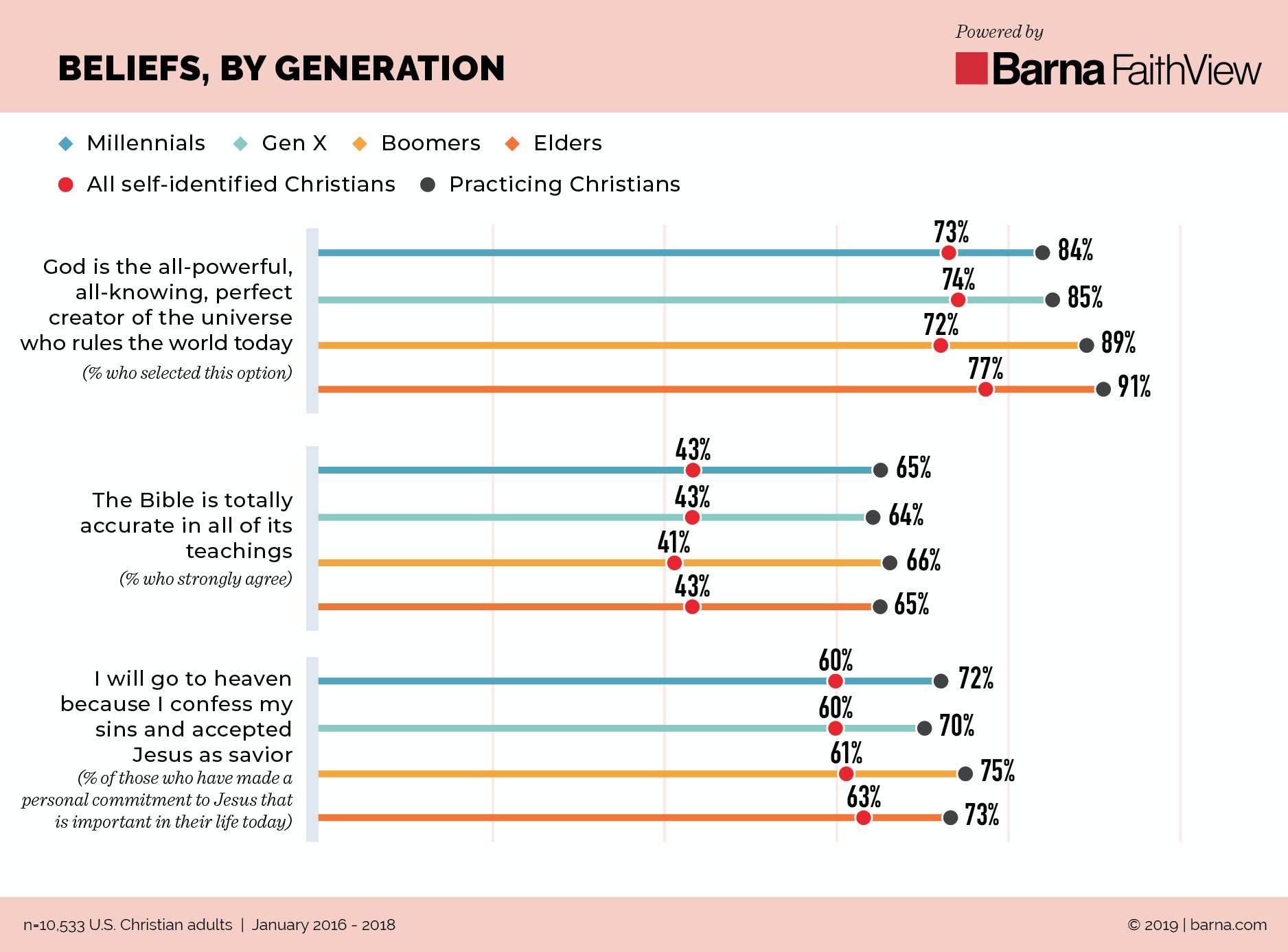 About the Research
The study on which these findings are based was conducted via online and telephone surveys conducted between January 2016 and January 2018. A total of 14,564 interviews were conducted among a random sample of U.S. adults, ages 18 years of age or older. The sample error is plus or minus 0.8 percentage point at 95 percent confidence level.

Photo by Liam Anderson on Pexel.

New Barna data collected in the summer of 2022 finds both parallels and stark divides on social issues that Christians and non-Christians identify as morally “right” or “wrong.” This article looks at responses from Americans—Christians, non-Christians and generations—to explore U.S. adults’ current views on morality.