Using 14 questions covering adults’ interactions with and perspectives about the Bible, Barna and American Bible Society defines five different segments of Bible engagement which measure Frequency (how often people interact with the Bible), Centrality (how the Bible shapes their choices) and Impact (how the Bible transforms their relationships).

Year-over-year, overall Bible engagement appears to have increased slightly, with some Disengaged shifting to Neutral or Friendly. The chart below shows some significant shifts among each major segment. Notably, there are 8-point increases since 2018 among the Bible Friendly and Neutral groups. There is also a 9-point decrease among the Disengaged.

2. Bible Centeredness Is Decreasing, and Skepticism Is Growing

Two other significant but less encouraging shifts in the spectrum of Bible engagement are worth noting. The first is that Bible Centered adults have decreased from 9 percent to 5 percent in the past year. The other trend is that more than one-third of adults (35%) reports never using the Bible in 2019, a 10 percentage point increase since 2011 (25%).

3. Adults Who Are Engaged with the Bible Give More Financially

Overall, seven in 10 Americans (70%) report giving to a non-profit organization of some type in the previous year. The typical amount given is $100. However, Bible users are more likely to donate than are non-Bible users. The typical non-Bible user donated $10, compared to Bible users, who gave an average of $500. Similarly, scripture engagement also corresponds with higher levels of giving. For example, Bible Centered adults gave an average of $1,000 in 2018 compared to $20 among Disengaged, and $5 among Skeptics. 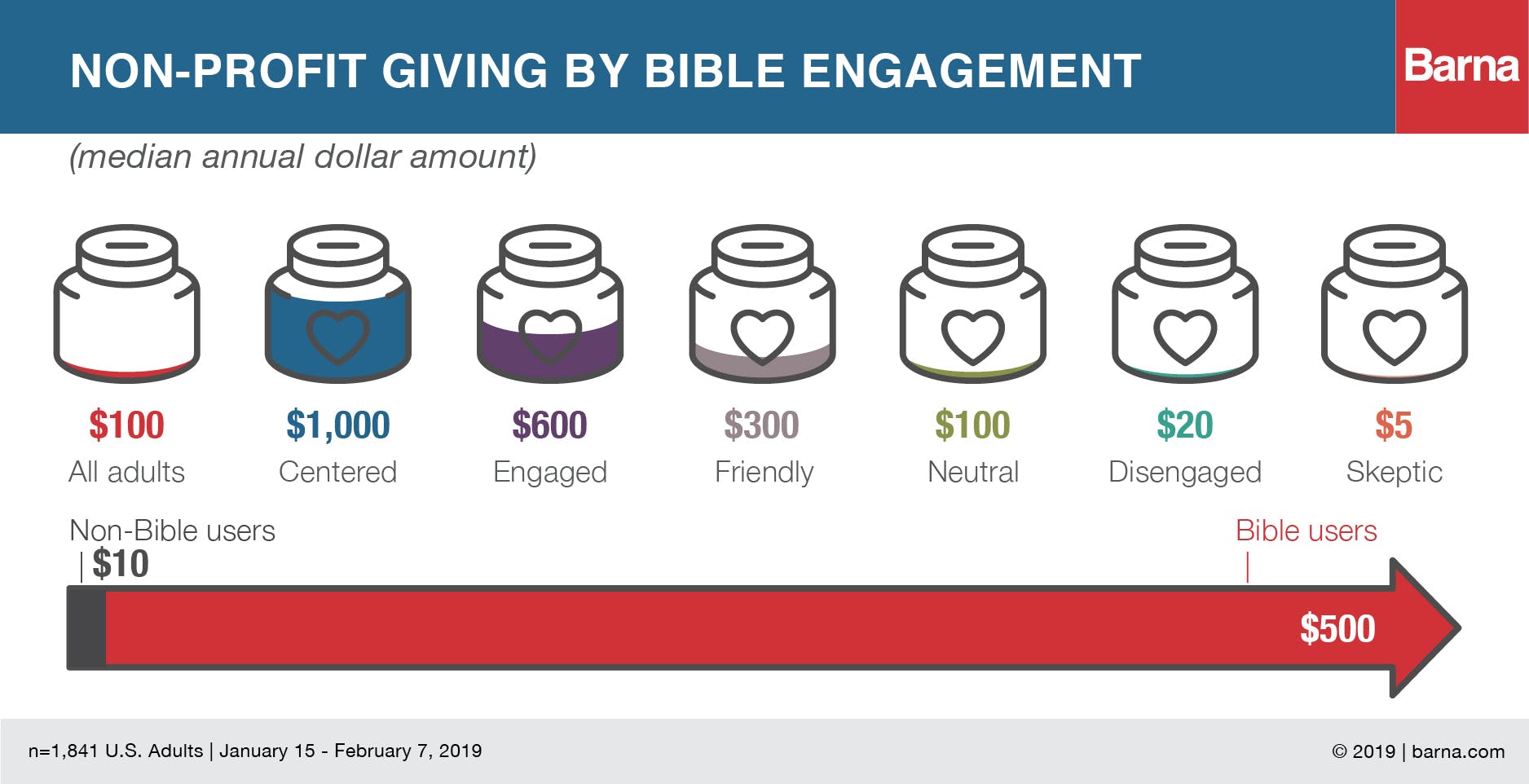 4. Six in 10 Americans Believe the Bible Has Transformed Their Lives

Six in 10 U.S. adults (59%) believe the message of the Bible has transformed their lives, including one-quarter (26%) who agree strongly. Roughly two in five adults (42%) say the Bible has not had such an impact.

Half of monthly Bible users (49%) agree their engagement with the Bible has made them feel more willing to engage with their faith. Among adults who use the Bible at least three to four times a year, three in five (61%) express they always experience a greater awareness of how much they need God. Half agree they consistently feel a sense of connection with God (51%), and a similar proportion (50%) desires to know God better. Another 46 percent of Bible users say they show more loving behavior toward others, and one in three (34%) is more generous with their time, energy or financial resources. Results also show a positive influence on how they treat people of a different race than themselves (62%), their support for refugees (55%), their decisions at work or school (53%) and their decisions about sex and sexuality (49%). 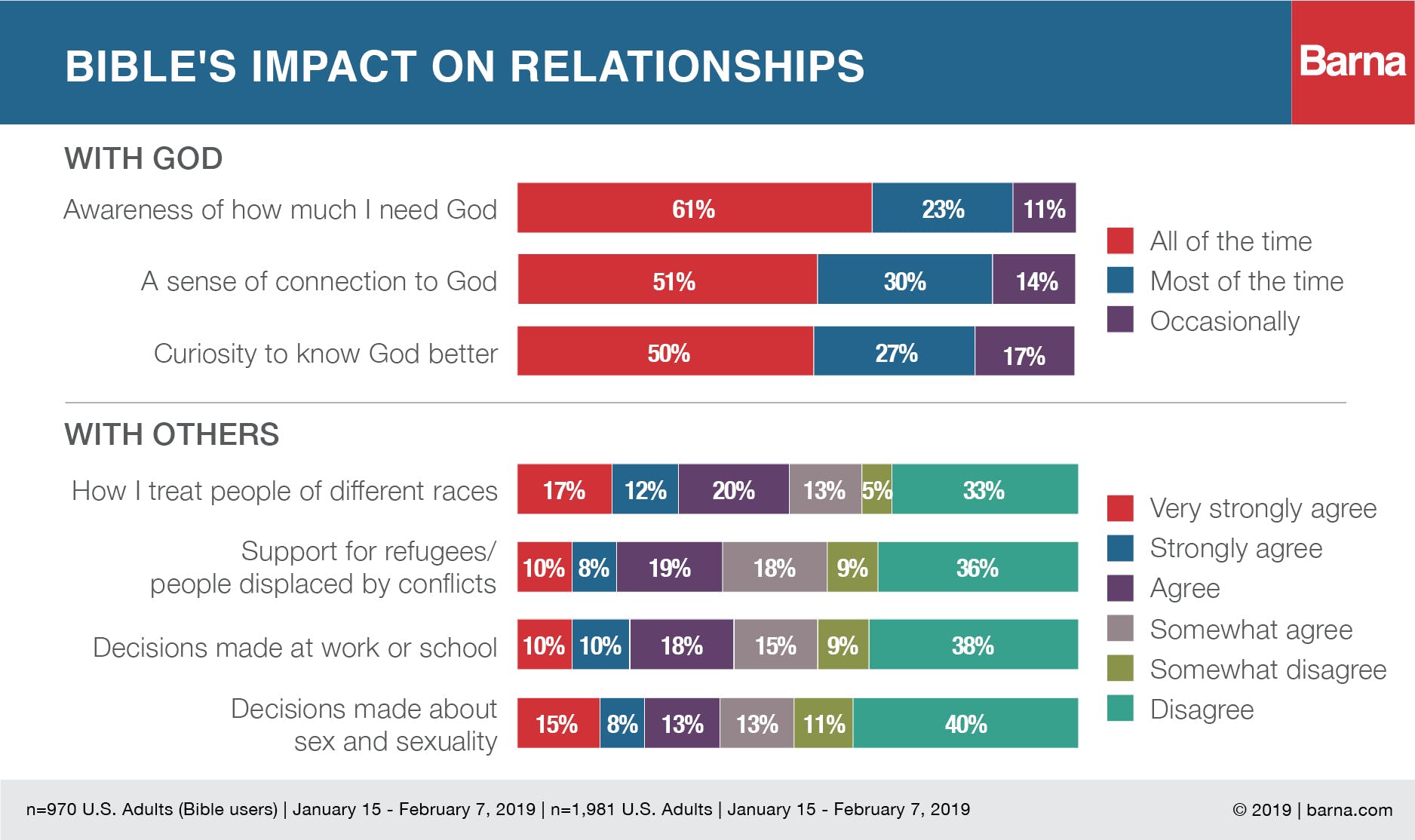 About the Research
The 2019 “State of the Bible” report contains findings from a nationwide study commissioned by American Bible Society and conducted by Barna. Two research methodologies were used for the study. The first included 1,001 telephone interviews (including by cell phone) with adults in all 50 states in the U.S., and the second consisted of 1,012 online surveys using a nationally representative panel. The use of two methodologies provided a larger sample size for key questions and ensured greater representation among all age groups. The telephone interviews were conducted from Jan. 29 to Feb. 7, 2019, and included U.S. adults 18 years of age or older. The online surveys were conducted from Jan. 15 to Jan. 30, 2019.

Photo by Rod Long on Unsplash

In a new Barna study, 88 percent of U.S. practicing Christians say they are at least somewhat familiar with the parable of the prodigal son—but what about their own experiences of giving and receiving forgiveness? To what extent does an awareness or practice of mercy permeate their lives?