State of the Bible 2017: Top Findings

Many Americans are searching for beacons of hope and moral grounding amidst uncertainty and perceived moral decline. Barna conducted the annual State of the Bible survey, commissioned by American Bible Society, to examine behaviors and beliefs about the Bible among U.S. adults. The results show that Americans overwhelmingly believe the Bible is a source of hope and a force for good even as they express growing concern for our nation’s morals. These and other snapshots are included in our list of top 10 findings from this year’s State of the Bible report. 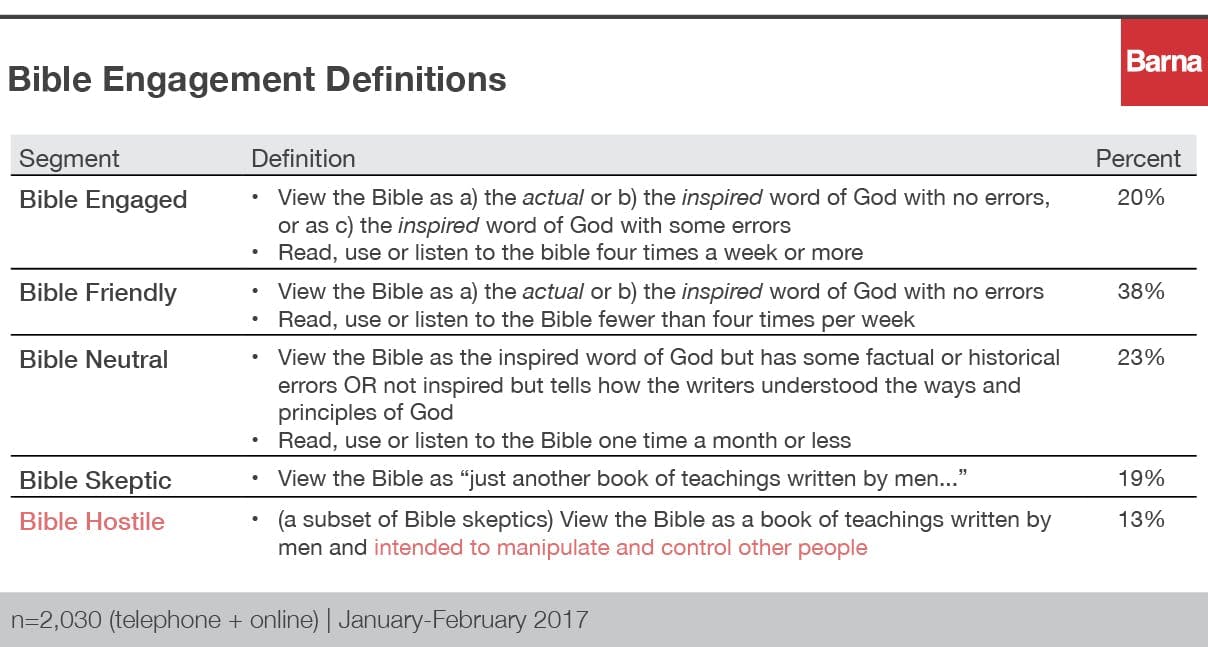 Levels of Bible engagement appear to be stabilizing after the brief dip in the Engaged segment since 2013 and the steady increase in Skeptics in recent years. Levels of the Neutral segment have remained somewhat steady since 2011 hovering around the low- to mid-twenties. After a significant drop from 2011 to 2012, the Friendly segment has also remained steady in the high thirties, and still represents the largest segment of the American population. 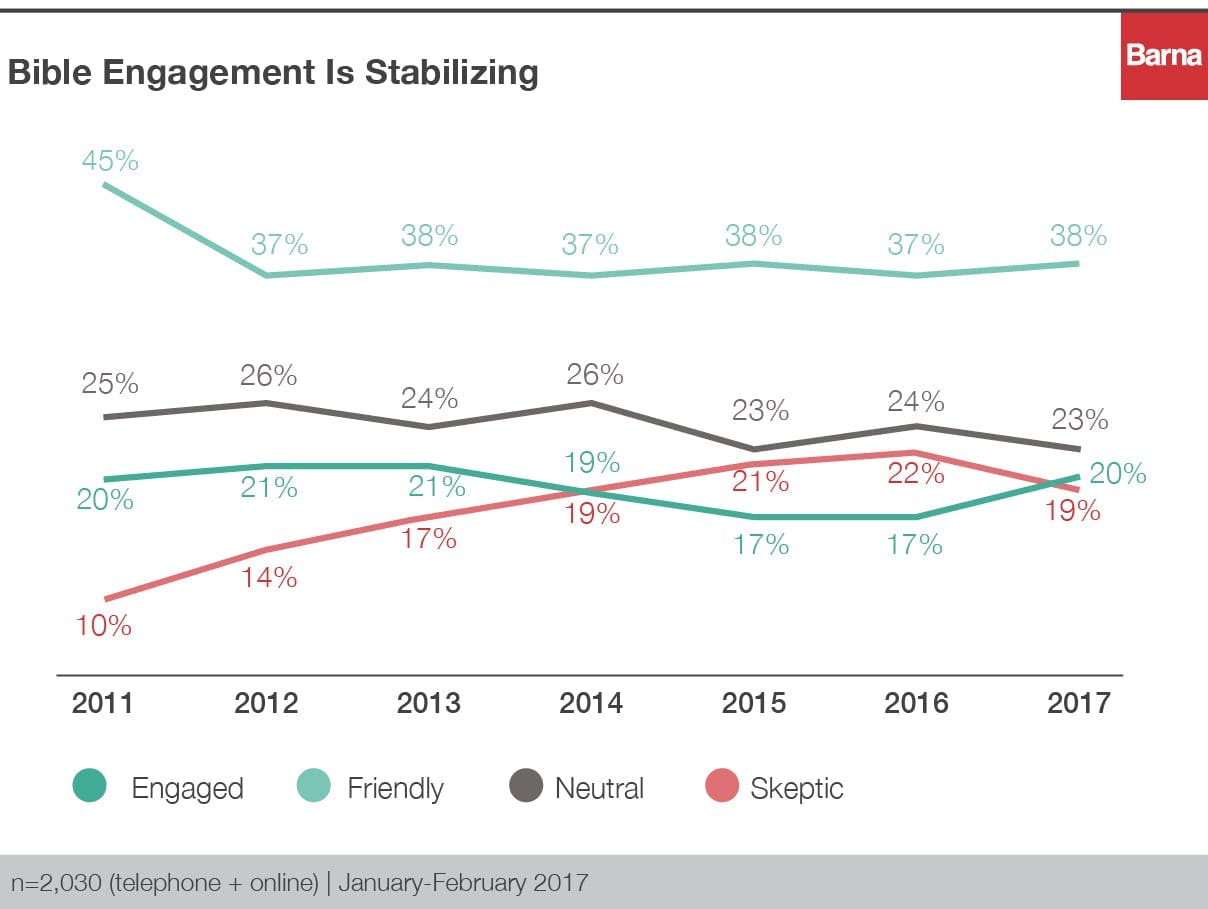 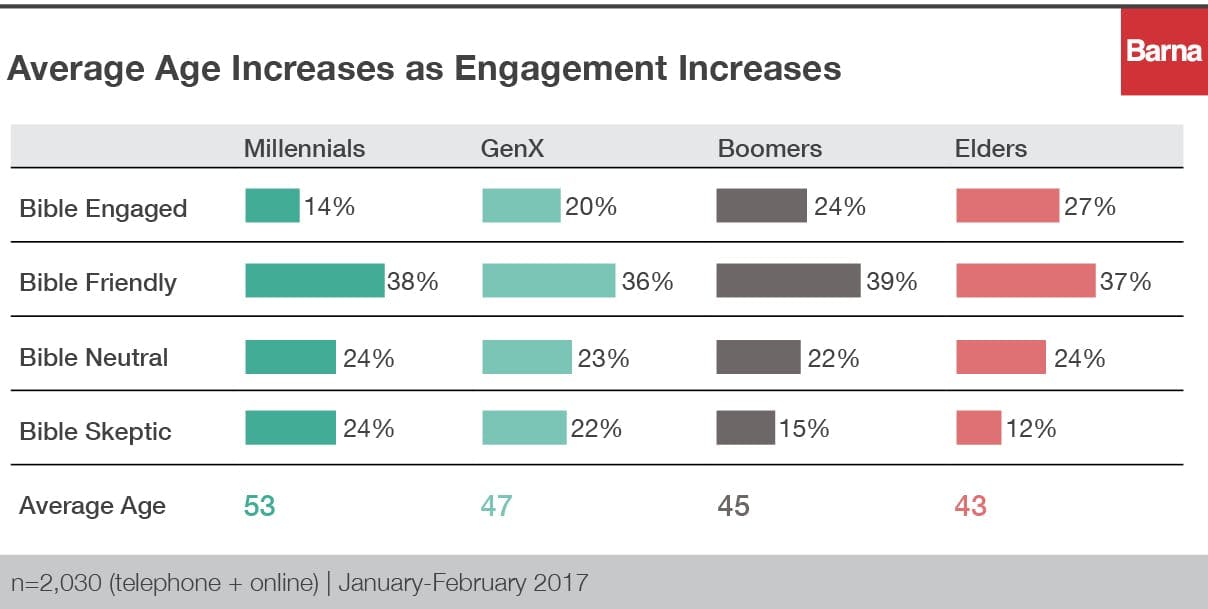 Women Are More Likely to Be Bible Friendly and Engaged
In general, women are more actively engaged with the Bible than men. For example, they are more likely to be Friendly (60% compared to 40%) and Engaged (53% compared to 47%) relative to men. The opposite is true for Neutrals (48% compared to 52%) and Skeptics (41% compared to 59%), which are both dominated by men.

Bible Users Prefer Print, but Increasingly Use Other Formats
The way Americans engage with the Bible is changing. Though most Bible users (91%) still prefer to use a print version of the Bible when engaging with scripture, an equal number (92%) report using another Bible format than print in the past year. Use of technology-related formats are all on the rise. More than half of users now search for Bible content on the internet (55%) or smart phone (53%), and another 43 percent use a Bible app on their phones. Since 2011, the use of basically every other Bible format has increased. 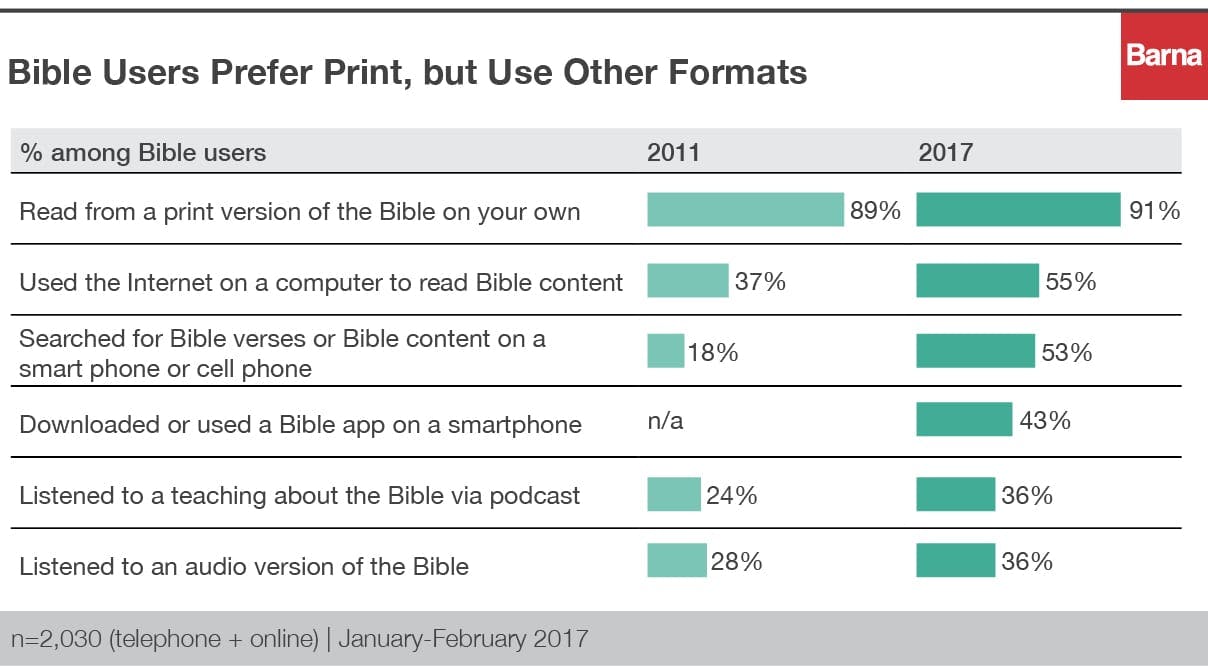 Most Households Own a Bible
The vast majority of households own at least one Bible (87%), a proportion that has stayed relatively consistent since 2011.Even the majority (62%) of Hostile and Skeptic (67%) households owns a Bible. Ownership of a Bible is universal among Bible Engaged and nearly so among those who are Bible Friendly (93%) compared to Bible Neutrals, at 86%. Millennials (82%) and Gen-Xers (86%) continue to be the generations least likely to live in a home with a Bible compared to Boomers (90%) and Elders (93%). African-Americans (95%) are significantly more likely than Whites (87%) and Hispanics (88%) to own a Bible. 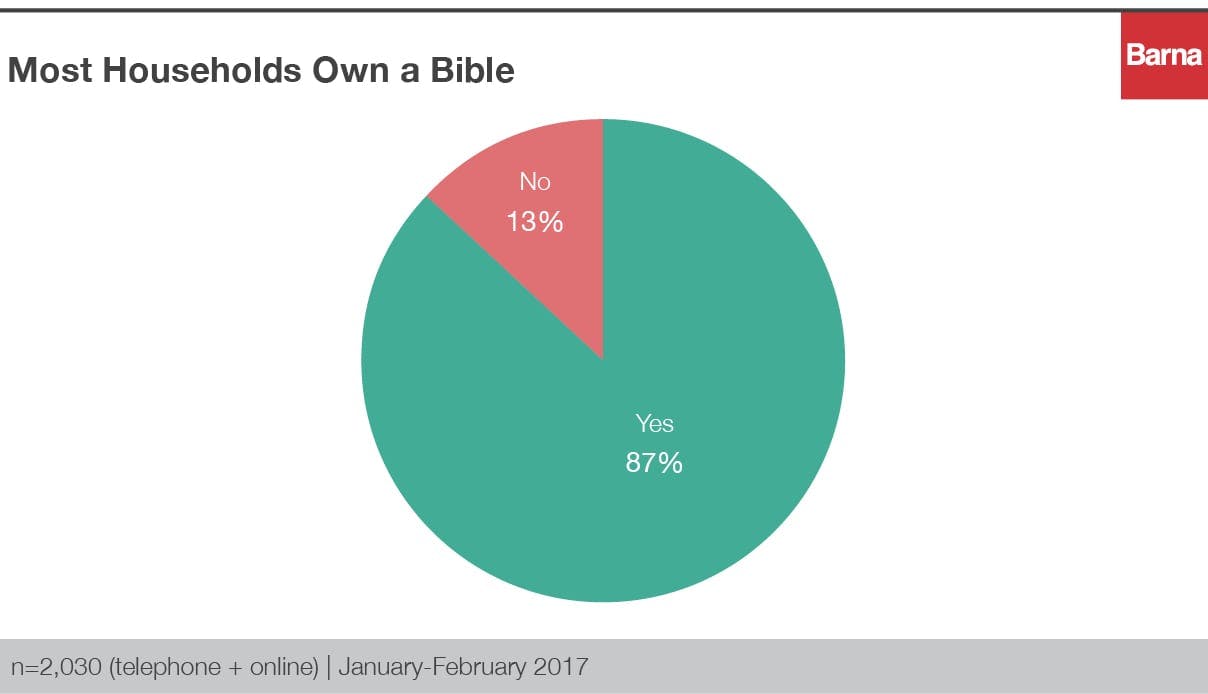 Most Skeptics are Hostile Toward the Bible
As we’ve seen, the Skeptic segment accounts for one in five American adults (19%). They do not hold a very high view of scripture, believing it to be just another book of teachings written by men that contain stories and advice. This year, Barna asked a follow-up question to see if Skeptics hold hostile views toward the Bible—and they did. In fact, more than three-quarters of Skeptics (78%) are hostile toward the Bible and believe it “was written to control or manipulate other people.”

Most Americans Desire Greater Bible Use
More than half of all adults wish they read the Bible more often (58%). This is down slightly from 2016 (61%). Each segment expresses a desire for more Bible reading, in fact, one in five Skeptics (22%) and one in five non-Christians (21%) wish they read or listened to the Bible more. Also, desire is particularly high among Friendlies (78%). But despite most Americans’ desire to read the Bible more, two-thirds of them (67%) say their level of Bible-reading is about the same as it was one year ago. 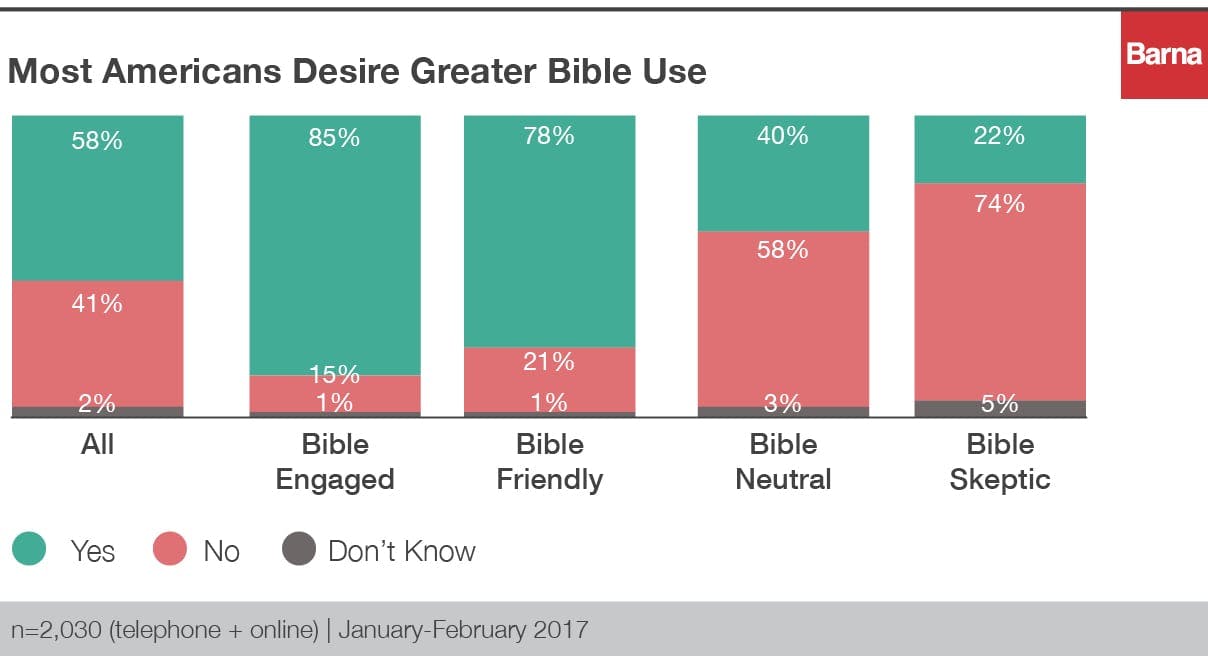 Increased Bible Engagement = Important Part of Faith Journey
More than one half (56%) of those who report an increase in Bible readership attribute it to their understanding that Bible reading is an important part of their faith journey. Although this number is lower than last year (67%), it is on track with 2014 (53%) and 2015 (58%) findings. Second to this response, many people point to a difficult life experience that led them to search the Bible for direction or answers (39%), at an increase of 13 percentage points from the previous year (26%). Seeing how the Bible changed someone they knew for the better was an important motivating factor for 30 percent of adults, as was being asked by someone they know to read the Bible (20%). 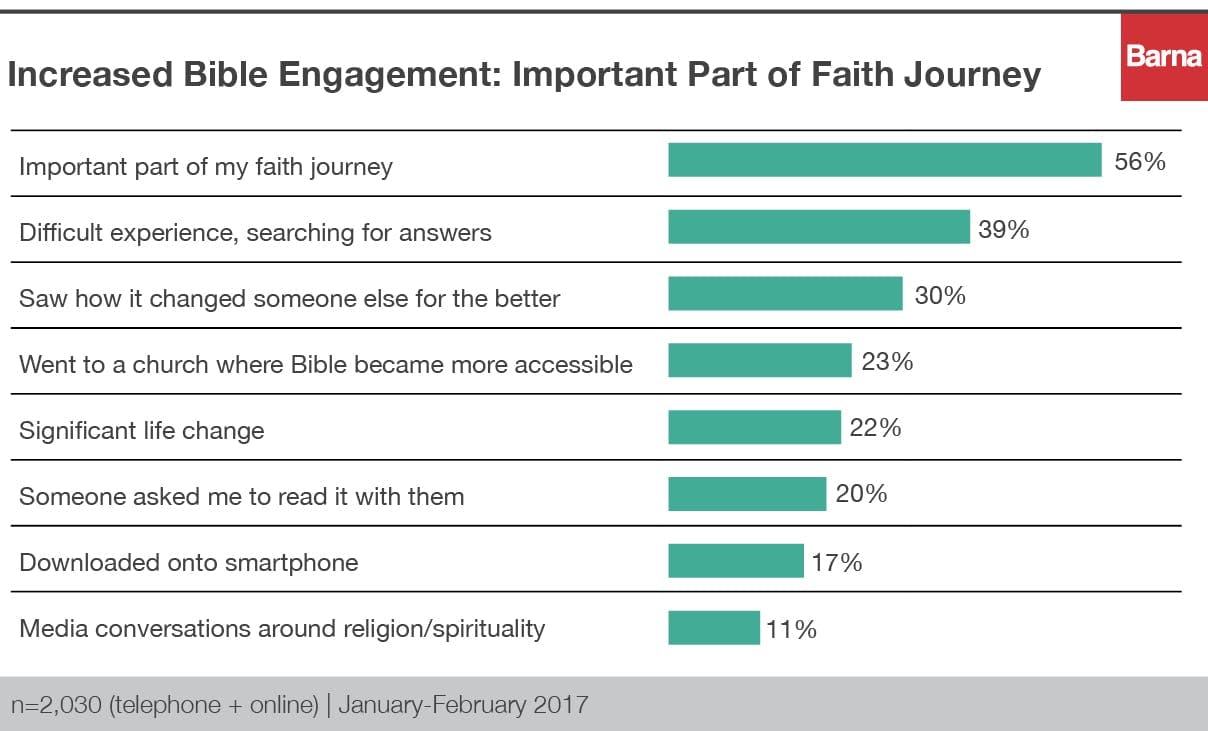 About the Research
The State of the Bible 2017 report contains the findings from a nationwide study commissioned by American Bible Society and conducted by Barna Research (a division of Barna Group). Two research methodologies were used for the study: the first included 1,025 telephone interviews (including cellphone interviews) with adults in all 50 states in the U.S., and the second study consisted of 1,028 online surveys using a nationally representative panel. The use of two methodologies provided a larger sample size for key questions and ensured even greater representation among all age groups. The telephone interviews were conducted Jan. 20 – 30, 2017, and included U.S. adults 18 years of age or older. The online surveys were conducted Jan. 23 – Feb. 2, 2017.

Practicing Protestant, practicing Catholic: Practicing Christians are those who identify as either Protestant or Catholic, who attend a religious service at least once a month and who say their faith is very important in their lives.
Non-Practicing Christian: Self-identified Christians who are non-practicing as defined above
No faith/Other faith: Individuals who do not consider themselves Christian (including atheists, agnostics and other faiths); Mormons and Jehovah’s Witnesses are also included, even if they describe themselves as Christian.

Unchurched: adults who have not attended a Christian church service in the past six months.

We live in a rapidly secularizing American culture. But even though fewer are going to church, many still believe in God and practice faith outside its walls. In this first of a two-part exploration of faith and spirituality outside the church, we look at those who “love Jesus but not the church.”