Barna conducted its annual State of the Bible survey, in partnership with American Bible Society, to examine behaviors and beliefs about the Bible among U.S. adults. The results show that, despite shifting cultural trends, Americans still read the Word, and it remains a powerful, transformative tool in their life. These and other snapshots are included in our list of top seven findings from this year’s State of the Bible report.

1. Half of Americans Are Bible Users
Overall, about half of Americans are “Bible users”—that is, they engage with the Bible on their own by using, listening to, watching, praying or using Bible text or content in any format (not including use at a church service) at least three to four times a year (48%). Bible use has remained relatively consistent since 2011. Adults who use the Bible daily account for 14 percent of the total adult population, followed by 13 percent who use it several times a week, 8 percent who do so once a week, 6 percent about once a month and 8 percent who use it three to four times a year. 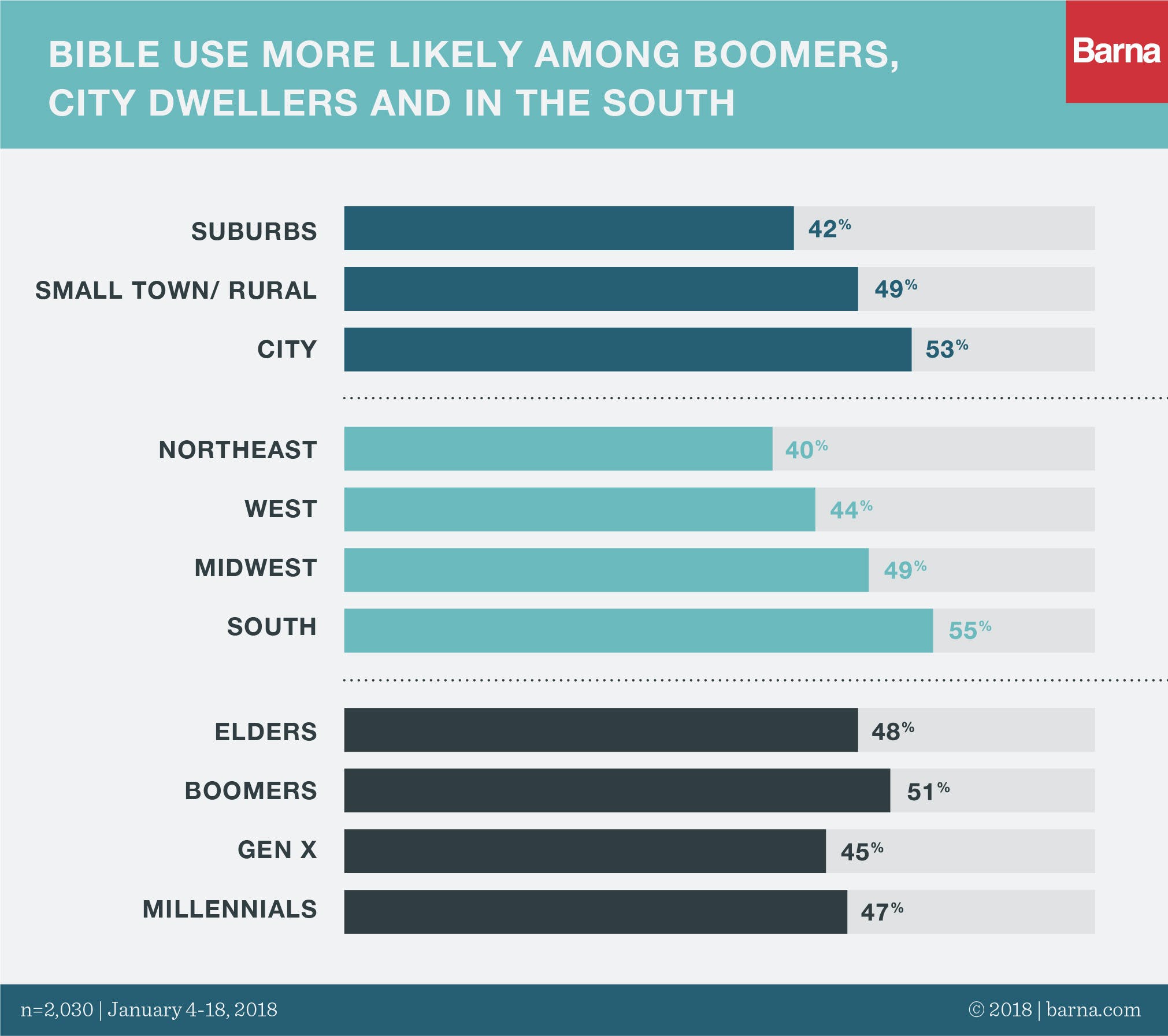 3. Use of Technology to Read the Bible Has Grown Steadily
For Bible users, the appeal of a print version of the Bible remains high at almost nine in 10 (89%). Little has changed in the preference for a physical copy of the scriptures in the last eight years since tracking began. Although use of digital formats is also on par with 2017, in general, use has steadily climbed since 2011. More than half of users now search for Bible content on the internet (57%) or a smartphone (55%), and another 42 percent use a Bible app on their phones. More than one-third listens to a teaching via podcast (35%) or audio version of the Bible (36%). Usage for all these formats continues to grow each year with the exception of small group usage, which appears to be on the decline again after having trended upward. 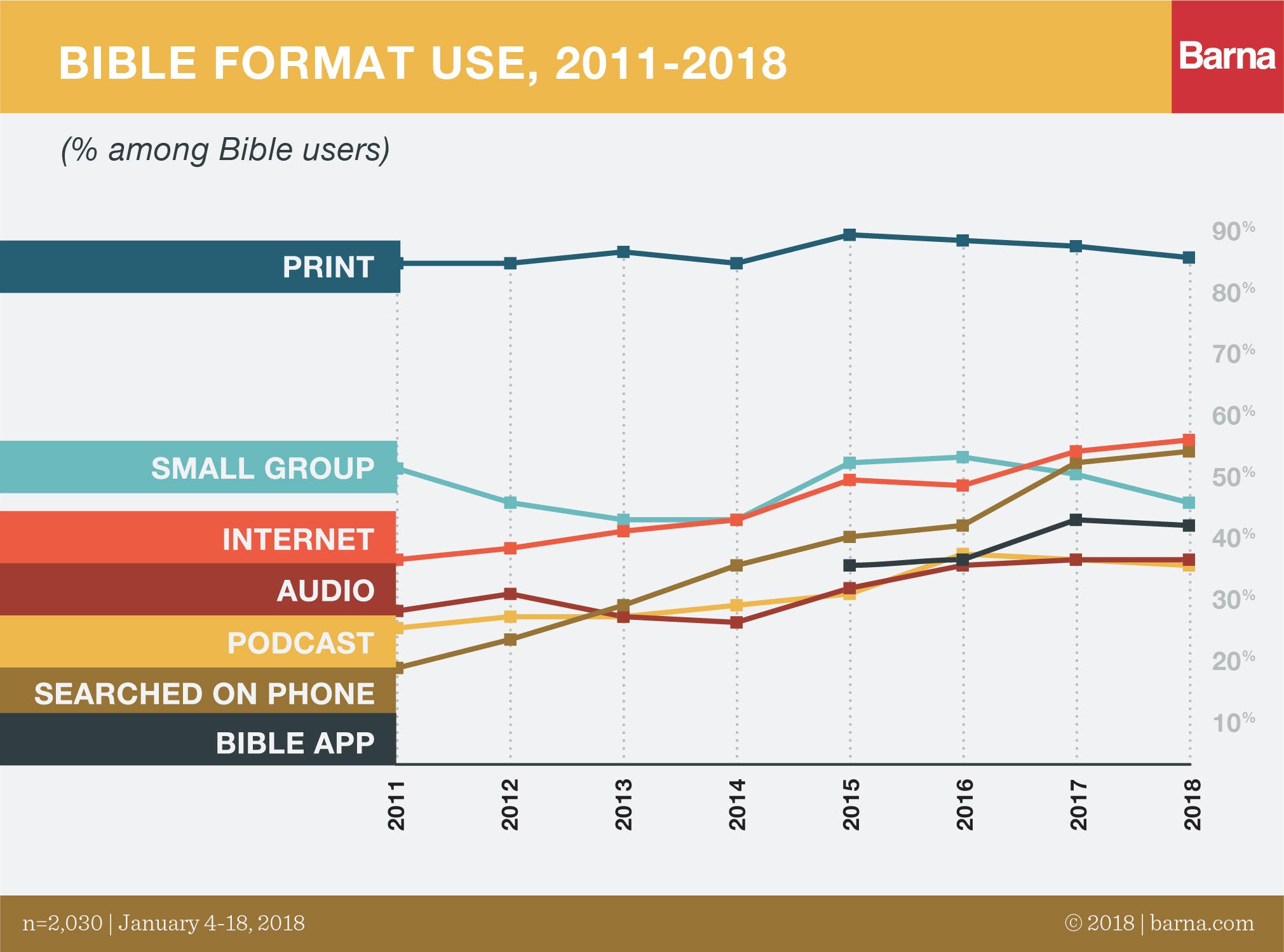 4. Two-Thirds of Americans Express Bible Curiosity
Two-thirds of Americans (66%) express at least some curiosity to know more about what the Bible says, including one in three (29%) who express a strong desire. A similar number of adults (63%) are interested in knowing more about who Jesus Christ is, including 31 percent who agree strongly. Curiosity is most common among weekly church attenders, adults who have never been to college and adults with minor children at home. Those who are already familiar with and open to using the Bible and those who are already in the church pews are the most movable. 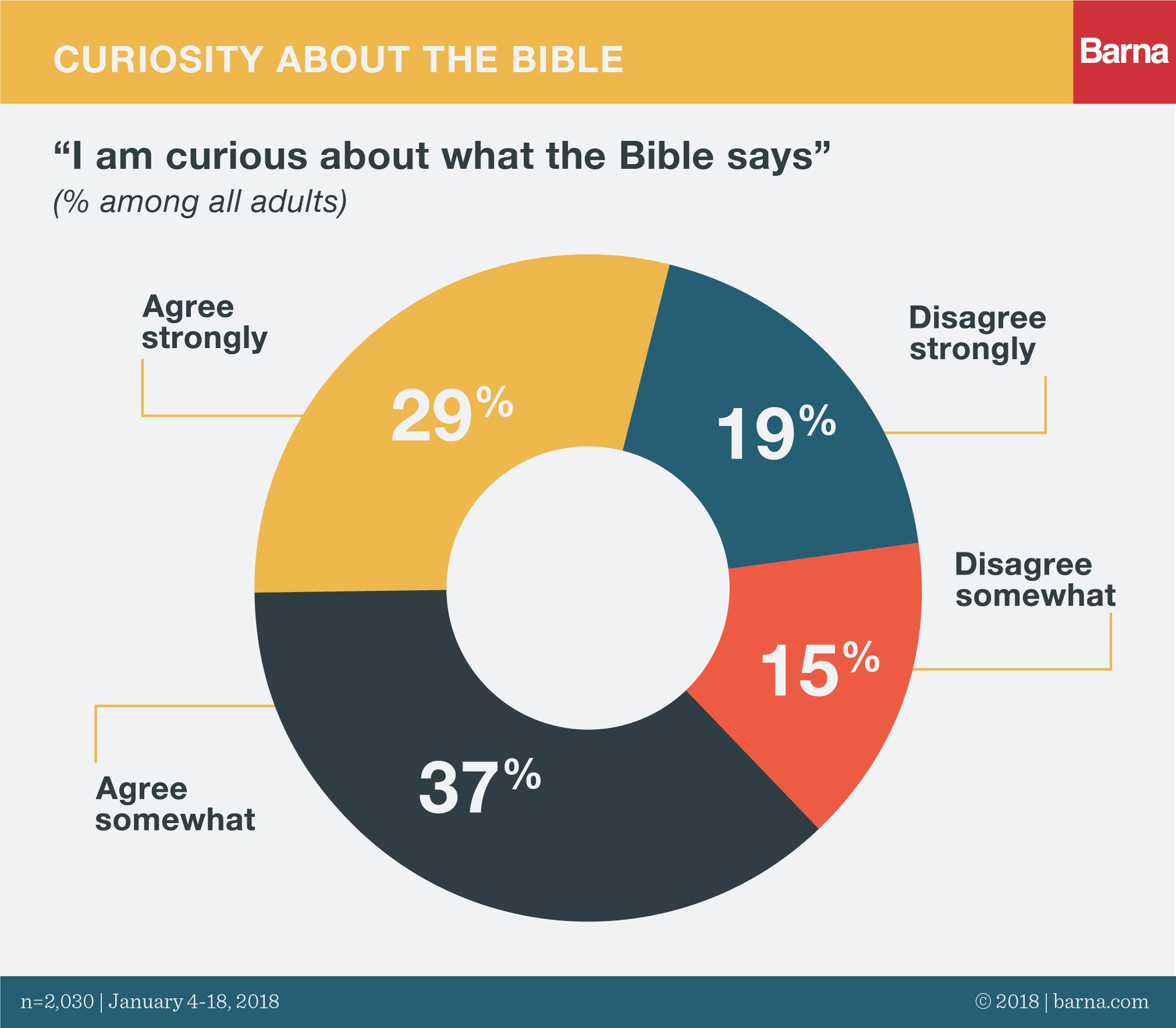 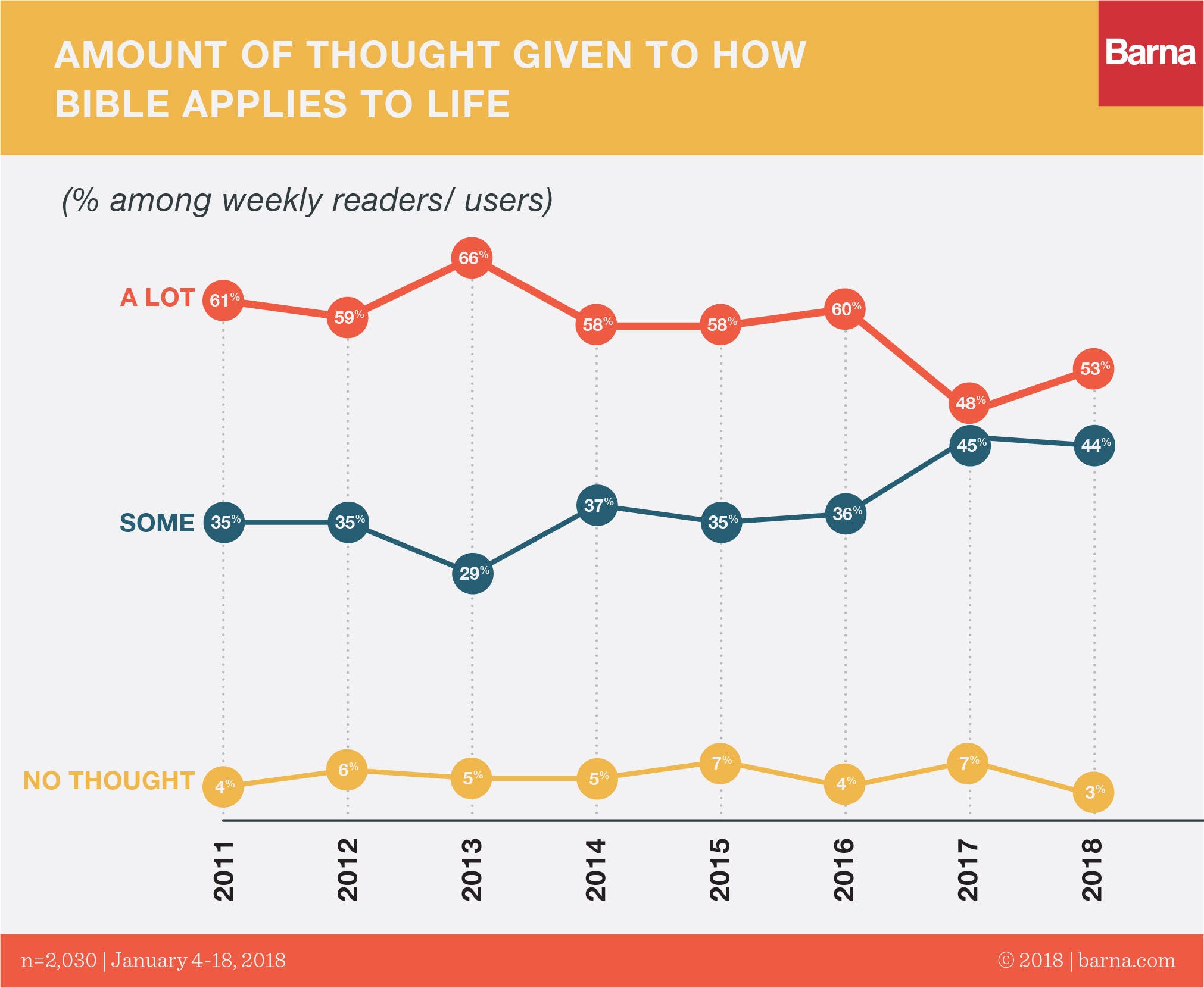 Just over half of adults who used the Bible in the past week say they give a lot of thought to how it might apply to their lives. Click To Tweet

6. People Think that Reading the Bible Positively Impacts Spiritual Growth
More than half of monthly Bible users report that reading the Bible has resulted in a self-perceived willingness to engage in their faith more (56%) and to show more loving behavior toward others (54%). Two out of five Bible users (42%) say they are more generous with their time, energy or financial resources. More than half of Bible users (57%) contend that when they use the Bible, they have a greater awareness of how much they need God all of the time. Slightly less than half experience a curiosity to know God better (48%) and consistently experience a sense of connection with God (47%). 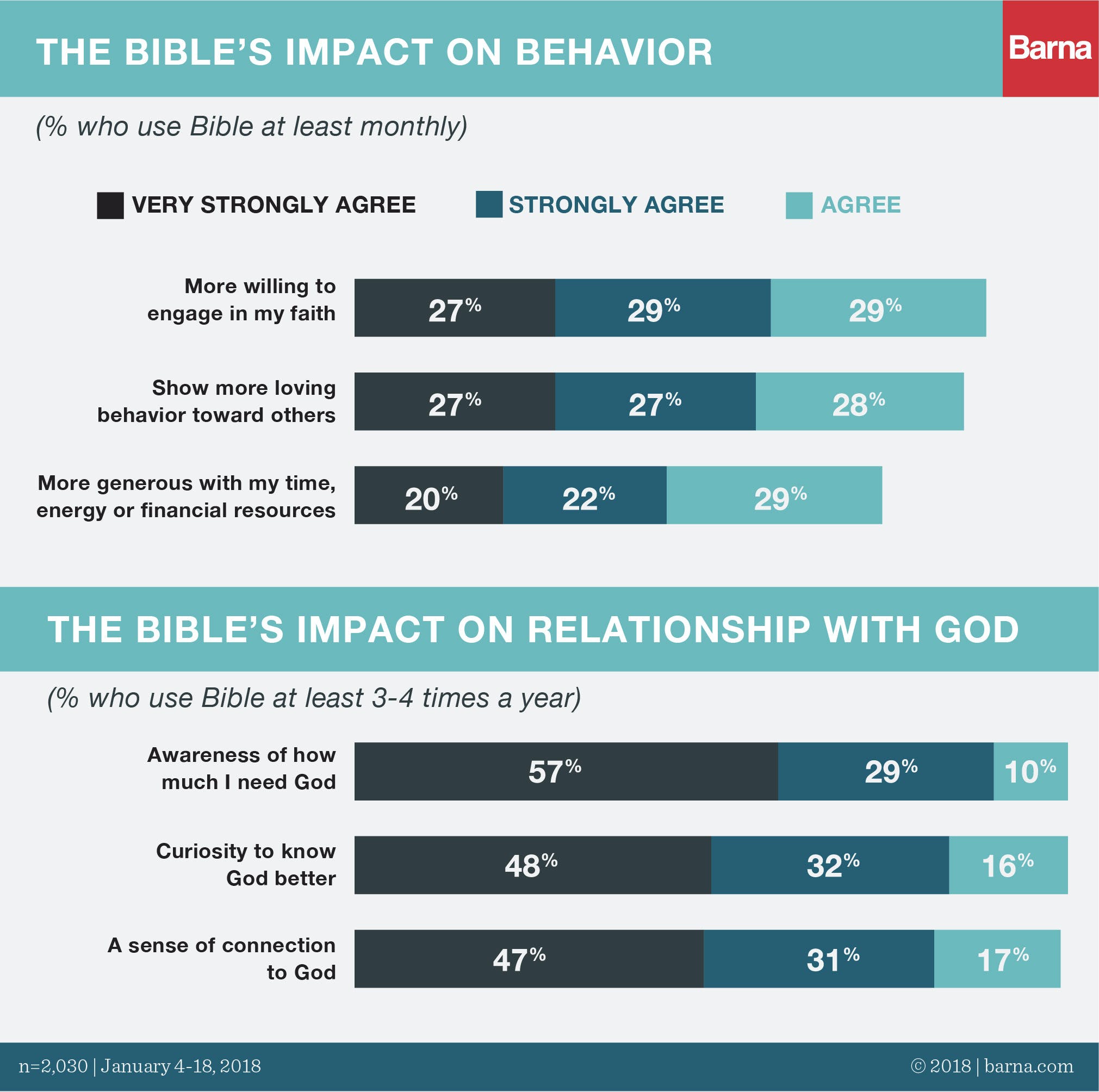 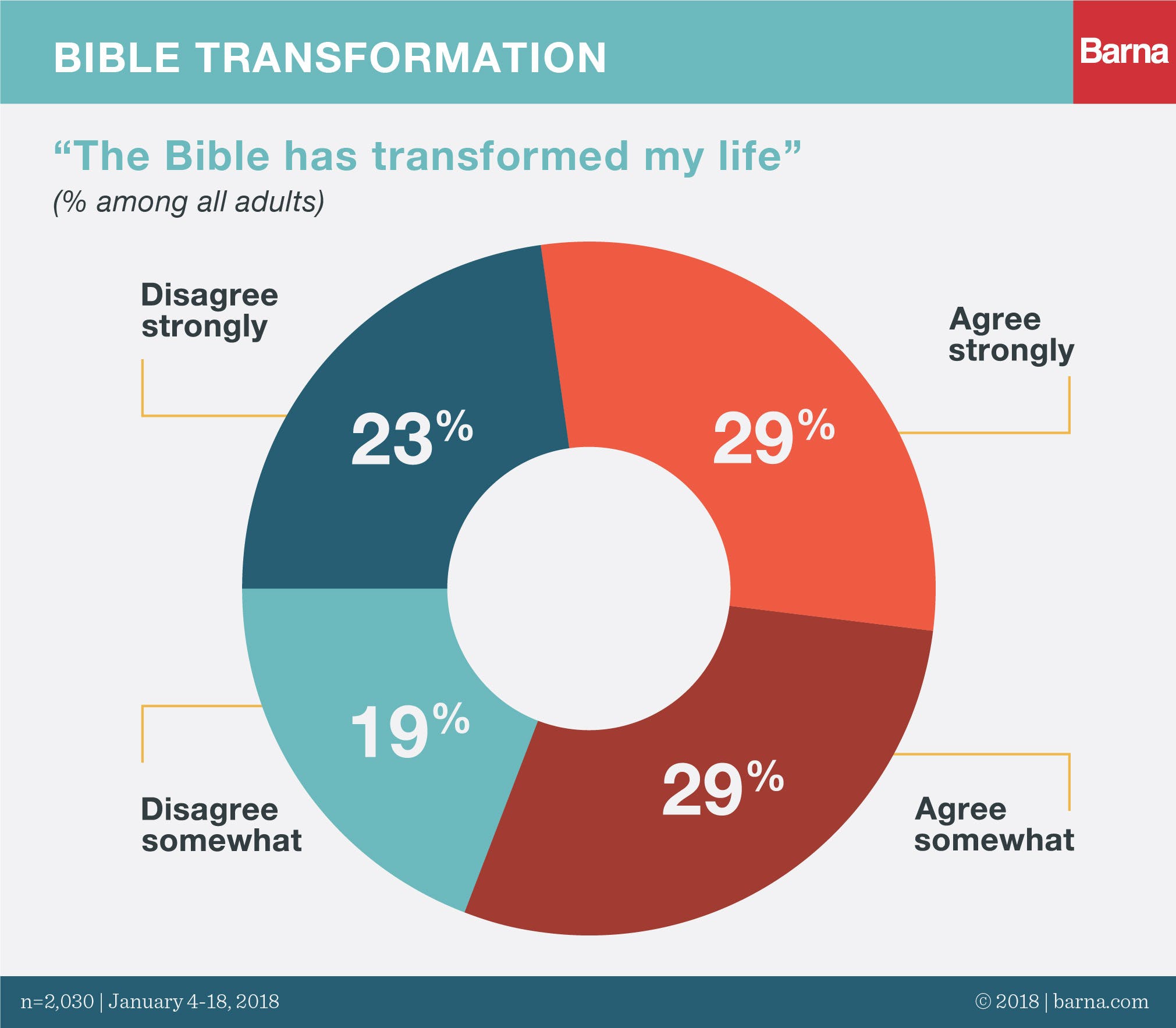 Almost six in 10 U.S. adults believe that the message of the Bible has transformed their life. Click To Tweet

This release contains the findings from a nationwide study commissioned by the American Bible Society and conducted by Barna Group. Two research methodologies were used for the study; one included 1,004 telephone interviews with adults 18 and older in the continental U.S., while the other was an online survey conducted with 1,036 adults using a nationally representative panel. A total of 2,040 interviews were conducted. A subset of the questions was asked in the telephone survey, while all of the questions were included online. The use of two methodologies provides a larger sample size and ensures greater representation among all age groups, ethnicities and socioeconomic groups. The telephone interviews were conducted from January 4 to January 11, 2018, and the online surveys were conducted January 9 to January 18, 2018.

Evangelism in a Digital Age: An Infographic

With the ubiquitous use of social media and mobile devices, the way we communicate has evolved—and, inevitably, so has the way we talk about faith. In a new report produced in partnership with Lutheran Hour Ministries, Barna asked American adults about how they discuss spirituality online.