In Luke 15, we find the account of the parable of the prodigal son. This well-known tale describes a young son who squanders his fortune, only to return home, hungry and humbled. When he does so, his generous father, “filled with love and compassion,” runs to him “even while he was still a long way off,” embraces him and celebrates his homecoming. This image is one of scripture’s more poignant examples of the mercy of unconditional forgiveness.

In a new Barna study, conducted in partnership with The Reimagine Group, 88 percent of U.S. practicing Christians say they are at least somewhat familiar with this story—but what about their own experiences of giving and receiving this kind of forgiveness? To what extent does an awareness or practice of mercy permeate their lives?

These are questions that shape The Mercy Journey Collection resources based on this research and set up to take churches and individuals on a data-driven exploration of mercy—from heart, to home, to church and, finally, to community. (Learn more about this study and The Mercy Journey toolkits for churches.) 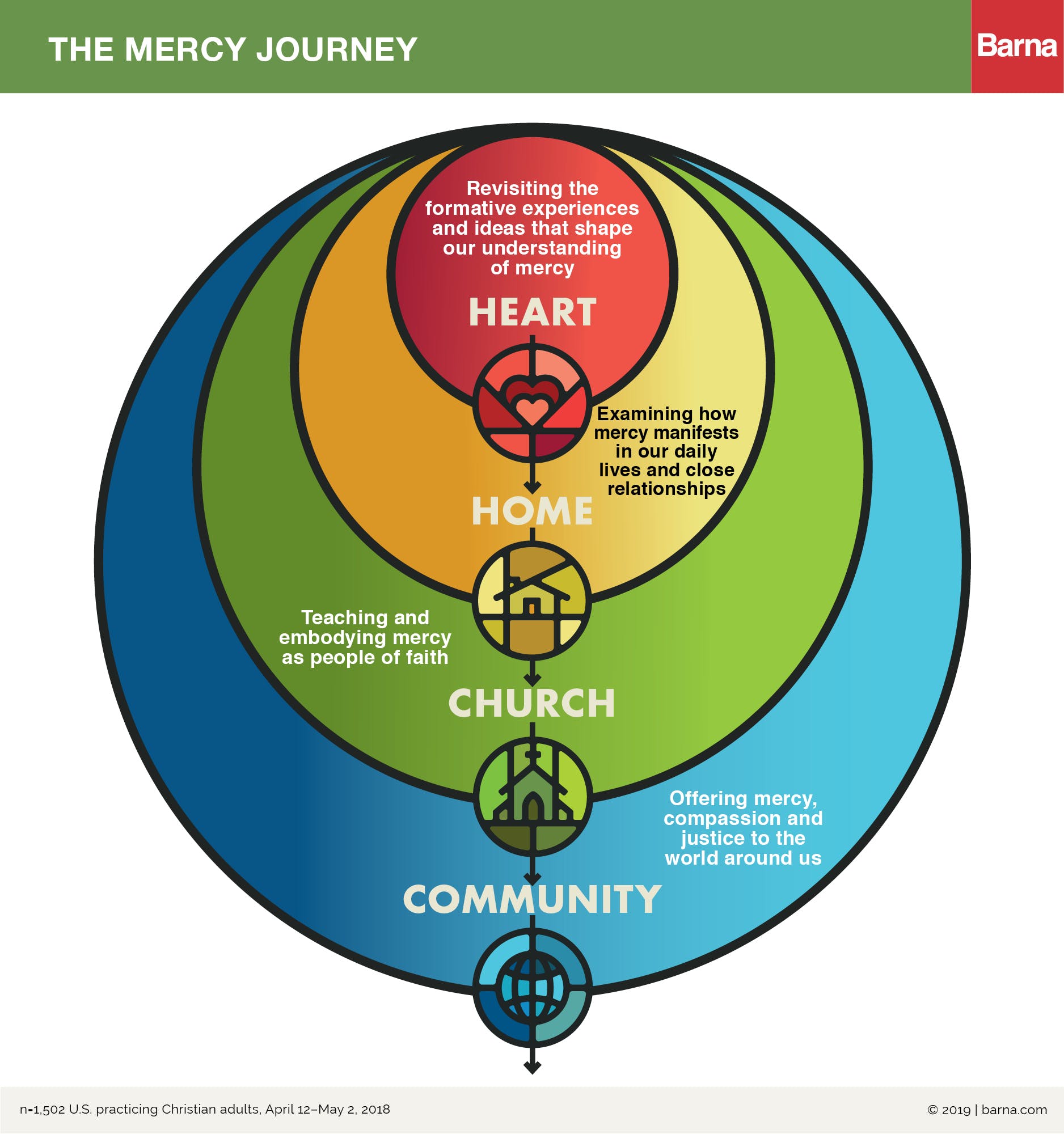 Reports of Giving Forgiveness Exceed Reports of Receiving Forgiveness
Though these statistics primarily describe respondents’ subjective reports or perceptions of these concepts, they at least offer a glimpse of Christians’ experiences with radical forgiveness. So it’s encouraging to know that a majority of practicing Christians (76%) believes they have offered unconditional, joyful forgiveness to another person who had hurt, upset or sinned against them (or someone they love). Nearly one in six (15%) says they have never offered this level of forgiveness, and 9 percent admit they are unsure.

Reports of receiving such radical forgiveness, however, are a bit more modest. Just over half of practicing Christians (55%) remembers another person being merciful to them in this way, with another 38 percent who say this has not happened and 7 percent who don’t know. This stark disparity suggests the perceptions of giving versus receiving unconditional forgiveness may sometimes vary dramatically—meaning, while someone may feel they have extended unconditional forgiveness, the supposed recipient of that forgiveness may not feel the same way. Further, not all Christians find themselves ready or capable of accepting forgiveness; more than one-fifth of practicing Christians (22%) reports struggling with receiving forgiveness for something they have personally done wrong. 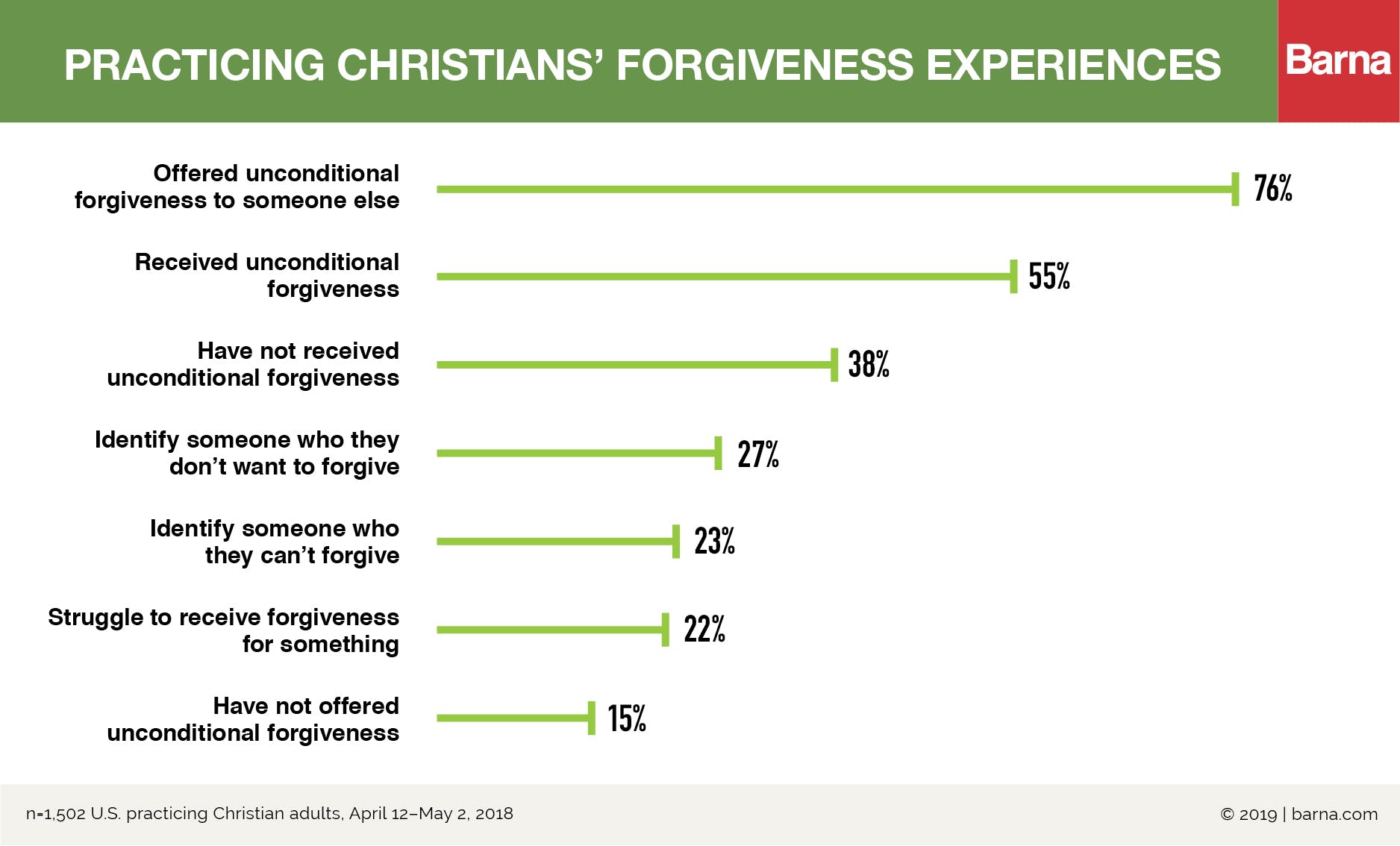 Hang-ups in Offering Forgiveness
Although most Christians recall a point at which they gave no-strings-attached forgiveness, some express reluctance in specific cases. Around one in four practicing Christians (23%) has a person in their life who “they just can’t forgive.”

Some traits stand out among those who say they have trouble forgiving someone. Theologically, this group is more likely to agree that people go to heaven because of good deeds (39% vs. 21% of those who can’t think of someone they struggle to forgive). Less than half feel that, in light of their faith, mercy is something that often influences their words or actions (46% vs. 67%). Perhaps unsurprisingly, two-thirds of these Christians (66%) can also think of a circumstance in which they don’t want to forgive someone. But this group might be compelled to extend more forgiveness: Among practicing Christians who claim there is an individual in their lives they can’t forgive, more than one-quarter (28%) admits they wish they could do so.

Forgiven Much, Forgiving Much
In Luke 7:47, Jesus draws a connection between those who have been greatly forgiven and those who show great love. Similarly, this study suggests that those who experience radical forgiveness have more willingness to forgive others. Among those who say they have received forgiveness, almost nine in 10 (87%) say they have given it in return (compared to 64% of those who have not received it). And regardless of their own experiences with forgiveness, a majority of practicing Christians (81%) believes that offering undeserved mercy to someone else is an action that God blesses.

What the Research Means
“Forgiveness is central to Christianity,” says Brooke Hempell, Barna’s senior vice president of research, “it’s what distinguishes it from any other religious faith. We are reconciled to God through Jesus’ sacrifice, and in response, we should be agents of reconciliation in every aspect of our lives. If Christians struggle to extend or receive forgiveness, not only do their relationships suffer, the Church’s witness is marred.

“As we approach Easter,” continues Hempell, “what better time to reflect on the beauty of God’s mercy and renew our commitment to truly understanding and living out mercy in our homes, churches and communities.”

Photo by Jeremy Yap on Unsplash

The Link Between Fun & Faith in Our Homes