For people of faith, an understanding of mercy is foundational to our understanding of the gospel and should permeate our daily lives—starting within our families and most intimate relationships. But the external influences and internal dynamics of our households can complicate this effort. Moderating screen time, fighting for that ever-elusive work-life balance, navigating relationships in a fraught political climate, discussing faith in an increasingly secularized society, cultivating generosity in an age of compassion fatigue—these are just some of the factors that, as multiple Barna Group studies attest, influence the atmospheres and values of our homes. Technology alone, parents tell us, has made it harder than ever to raise children.

So how are families doing in cultivating merciful mindsets? A new Barna project produced in partnership with The Reimagine Group, The Mercy Journey, examines the role of forgiveness and mercy in the lives of Christian adults in the U.S. The data suggest family relationships may heighten or shape forgiving attitudes in significant ways.

Married Couples Prioritize Peacemaking
For better, for worse. For richer, for poorer. In sickness and in health. Whatever the wording of a couple’s wedding vows, there’s generally an acknowledgment that tough times will come. This will require mediating tension or giving and receiving forgiveness, and this study indicates married practicing Christians are following through—or, at least, they report doing so.

First, married couples often start with a different definition of forgiveness. When asked which outcomes characterize real forgiveness, married individuals are significantly more likely than others to prioritize peacemaking. Six out of 10 married respondents (61%) say that not seeking punishment or retribution is a key element of forgiveness, while half of those who have never been married (51%) agree. Nearly three-quarters of married individuals (72%) say forgiveness is about repaired relationships, plain and simple. Those who have never married are 10 percentage points less likely to agree with this statement (62%). Meanwhile, these single practicing Christians have a different boundary in mind; they are more likely than married practicing Christians to say forgiveness may mean restoring a relationship without forgetting the offense (30% vs. 22%). 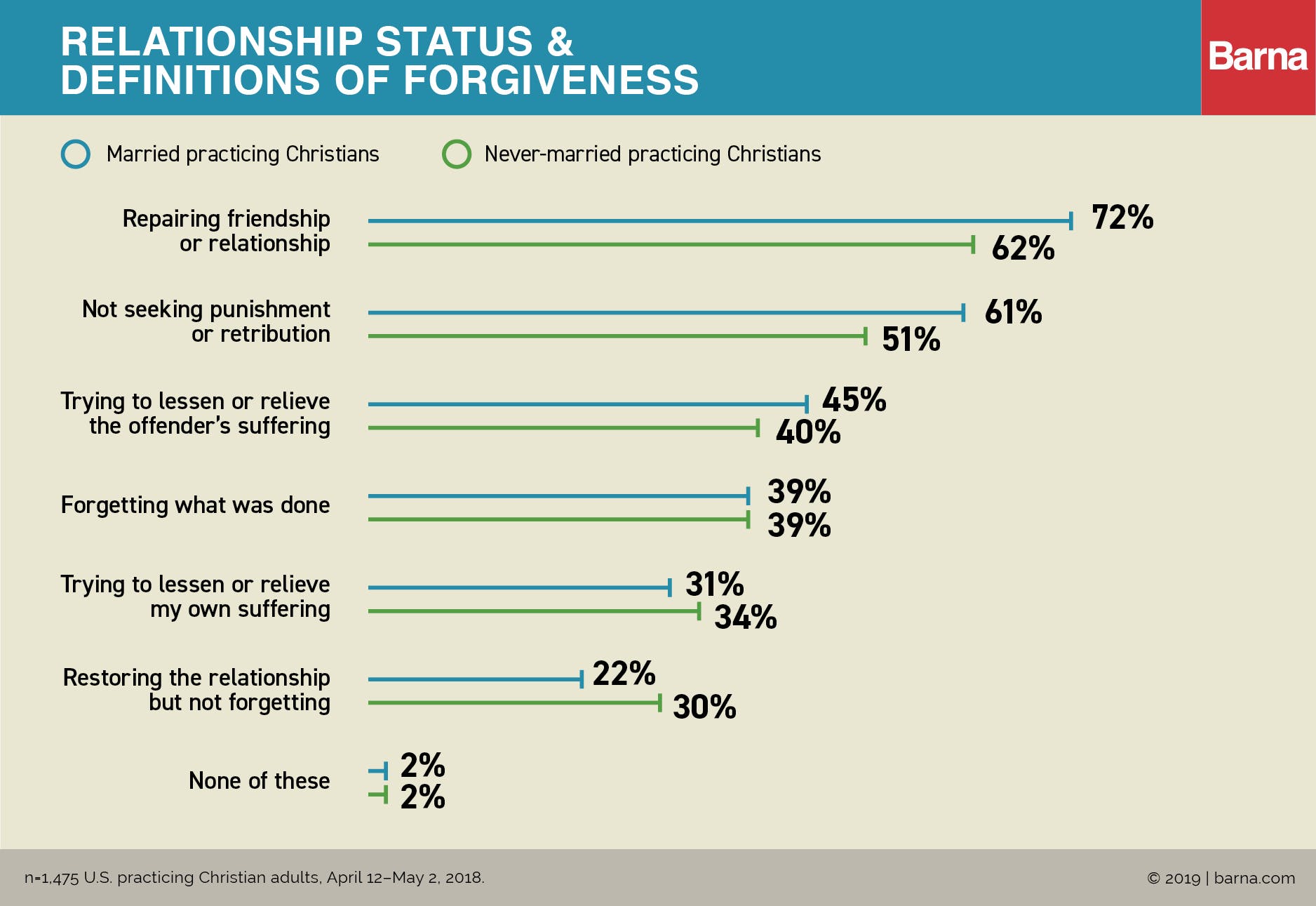 With a priority set on moving past offenses, couples appear to encounter fewer barriers to giving forgiveness. A third of never-married practicing Christians (33%) says there is someone they don’t want to forgive. This contrasts with less than a quarter of married practicing Christians (24%) who say the same. Similarly, three in 10 never-married singles (28%) also say there’s someone they just can’t forgive, while only one-fifth of married individuals (21%) agrees with this statement.

Married couples likely are well rehearsed in needing forgiveness, too. When asked if there was something for which a person had yet to accept forgiveness, 19 percent of married practicing Christians, compared to 30 percent of singles, say yes.

According to another Barna study produced in partnership with Lutheran Hour Ministries, married practicing Christians rely on their partner for many needs, both practical and emotional. They tend to look to their spouse first for everything from encouragement and money to questions about faith and the Bible. That’s not to say this is always the best route; unmarried Christians benefit from a diverse network that meets their needs, primarily their mothers, friends and significant others. But it’s possible that the proximity and consistency of a marriage partnership—as well as possible relationship dynamics for couples with children (see below)—necessitate that individuals adopt merciful attitudes and behaviors, day in and day out.

Read a Q&A with BJ Thompson, executive director of Build a Better Us, about communicating mercy in marriage. Parents Report Greater Levels of Compassion But Struggle to Receive Forgiveness
Just as the bond of marriage adds an interesting layer to a practicing Christian’s personal understanding of mercy, so too does the intimacy of parenting. The data show some gaps not only between those who are and are not currently raising children under 18, but at times reveal additional gaps between mothers and fathers or between married and single parents.

When asked about a sense of charity toward various groups, practicing Christians in the child-rearing years are more likely than those who aren’t to express high levels of compassion for the poor (55% vs. 48%), for criminals (13% vs. 7%) or even for people who have wronged them (18% vs. 11%).

Given these compassionate attitudes, it makes sense that a pattern continues in looking at reports of giving and receiving unconditional forgiveness. Parents of children under 18 see a spike here (69% have received, 83% have offered), especially mothers (72% vs. 66% of fathers have received, 88% vs. 78% of fathers have offered). This could be due to the fact that women in general report being more forgiving, or might be linked to mothers often being more engaged in daily interactions with children and extended households. Single fathers look more like those who don’t have children in their reported experiences of unconditional forgiveness (71% have offered, 54% have received).

It’s worth noting, there aren’t major differences between parents’ and non-parents’ primary characterization of forgiveness: repairing a friendship or relationship. Yet overall, parents of minors are more likely to say there is something for which they personally struggle to receive forgiveness (30% vs. 18% of those without children at home). Single mothers jump up on this point, with four in 10 (41%) admitting a reluctance to accept forgiveness for something. It’s possible that the more responsibility one has (especially sole responsibility) to nurture a child or home environment, the more opportunities one feels they may have to offend or disappoint—and, in the aftermath, to be harder on oneself for doing so.

Read a Q&A with pastor and author Dr. Paul David Tripp on how parents can model mercy. 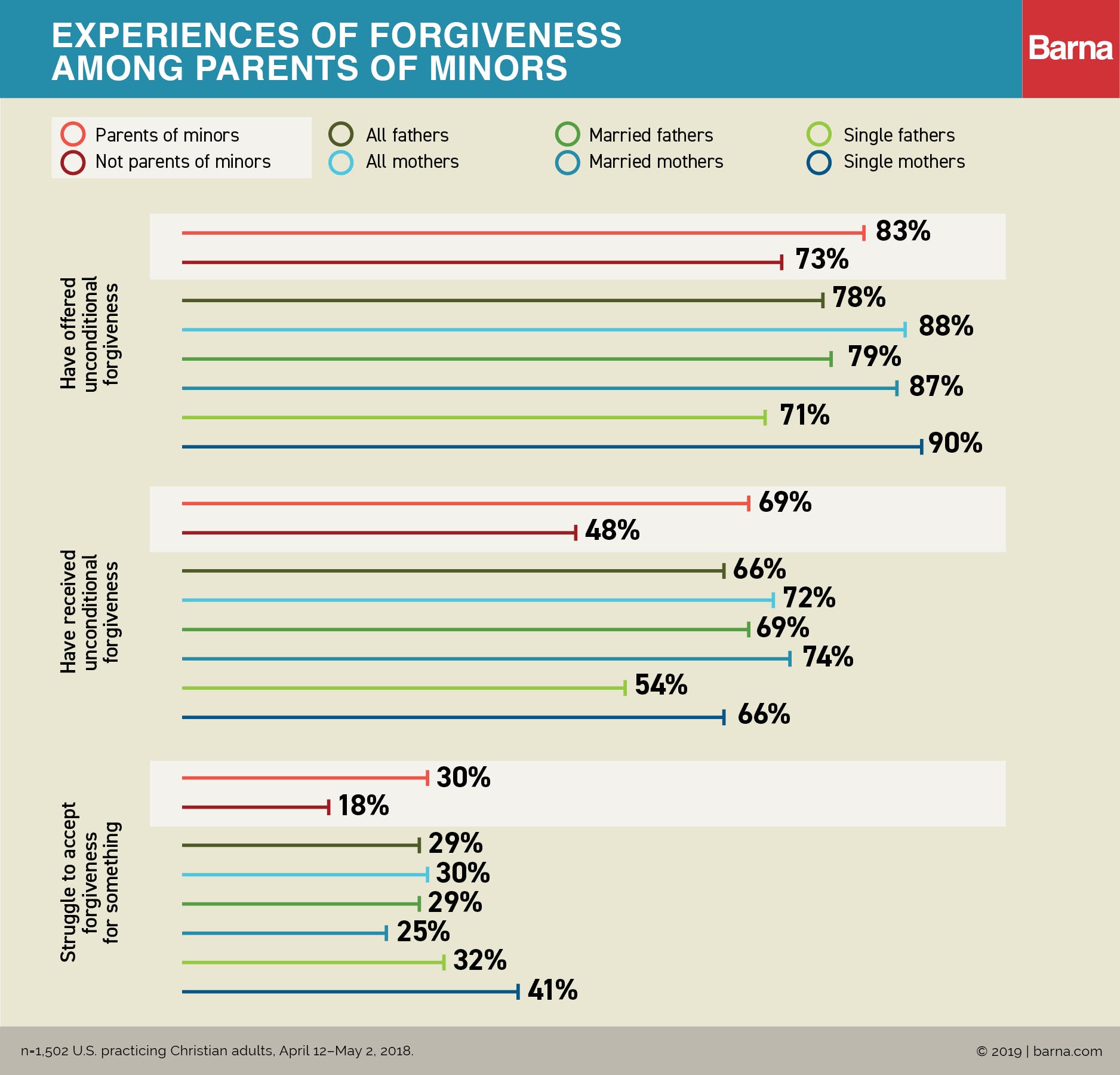 Photo by rawpixel.com from Pexels

The Most Post-Christian Cities in America: 2019